You have the right item in the gallery. Looks great.
Chris
Top

What is the color and brand of your paint that was used. I have a couple of ghq town buildings that I want to paint but could not think of what to use. I would love to start on them at some point
Quantity has a Quality all its own.

Excellent attention to detail! I feel like we might do the same thing, walk through the neighborhood looking houses and taking note on weathering patterns on roofs, lol.
Top

Excellent work on the Belgian farmhouses, Begemot! As echoed by others, fine attention to detail.
Top

I’m a sucker for great terrain pieces - that is an excellent job on the painting. I imagine that was a long term job but it was worth the effort. Hats off to you on that one!
Top

Really excellent painting! I can't imagine painting the individual bricks at this scale but it looks really good so worth the time and effort.
Tactics are the opinion of the senior officer present.
Top

Tedious is an understatement! Looks great!

Guys - Thanks for your comments. Much appreciated.

Hoth - I mix my colors using artists' oil paints. For these buildings I had some photo references I used as a guide for the colors I would need to mix on the palette. If your preference is for bottled paints I don't know what to suggest beyond looking for the closest colors in your favorite product line to match however you decide to do your buildings.

Begemot
The summer grasses.
All that remains
Of warriors' dreams.
--- Basho
Top

Thanks.
Quantity has a Quality all its own.

I appreciate both what you did, and how well you did it.

For me, as I have progressed in my miniatures wargaming* I have found a growing appreciation for good looking terrain. It adds so much to the game to look down at the table and see something that resonates with your mind's eye picture of what the battlefield would have looked like. It is almost as if confirming what it looks like in my imagination helps to transport me there. If the terrain strikes a chord with my imagination, sometimes I want to stop playing the game and just stare at it for a while, the experience can be so enriching.

That's what I mean by appreciating what you did. Your attention to detail on these farm structures does not make the game mechanics work better, does not give you more troops to put on the table, does not help you win or speed up your game. But it would help me play. The operative word being "play". It would spike my imagination and my enjoyment as I might sit at your game table.

And you did a good job. That's another positive. I mean not only did you intend to make them look good, but you also succeeded. Wildly. They look really good!

*Note: what I probably meant to say was "as I get older". But who wants to admit to that?
-Mark 1
Difficile est, saturam non scribere.
"It is hard NOT to write satire." - Decimus Iunius Juvenalis, 1st Century AD
Top

I fully agree, the scenery is just as rewarding as the game itself. It makes the overall experience better. For myself, I’ve replaced most of the markers GHQ provides for Micronauts with 3D effects to represent each. Splashes for straddles, smoke plumes for fires, little chips with torpedo wakes…. It makes a flat seascape come to life a little.
Top

Mark - Thank you for your kind and considered comments regarding the farm buildings. I confess to being surprised , but gratified, by the response they have received from the forum community. It was quite unexpected.

I agree that good looking terrain adds greatly to the enjoyment of the miniatures gaming experience. It helps greatly in creating the imaginative environment that turns a gaming contest into a dramatic and aesthetic experience. And a pause to contemplate a well realized gaming table is an appropriate part of the experience. I sometimes take more delight in looking at Mark Luther's game settings as I do in the actual military problem on his table.

Begemot
The summer grasses.
All that remains
Of warriors' dreams.
--- Basho
Top

My latest project is a platoon of M60A1s painted in the MASSTER scheme, circa 1975. This was camo scheme that came before MERDC and was used in Germany by the US 7th Army. Its use continued for a time after the introduction of MERDC in US units. Tankograd books on Reforger exercises of 1976 and 1977 show US units wearing either scheme. This is a camo scheme that seems, to me anyway, inappropriate for Germany, but it appears to have been widely used. I got to Germany in the spring 1976. I don't recall noticing this pattern in the 2nd Brigade of the 8th Infantry Division. My battalion, the 1-39 Infantry, was still painted in olive drab. We repainted in MERDC in the late spring of that year. 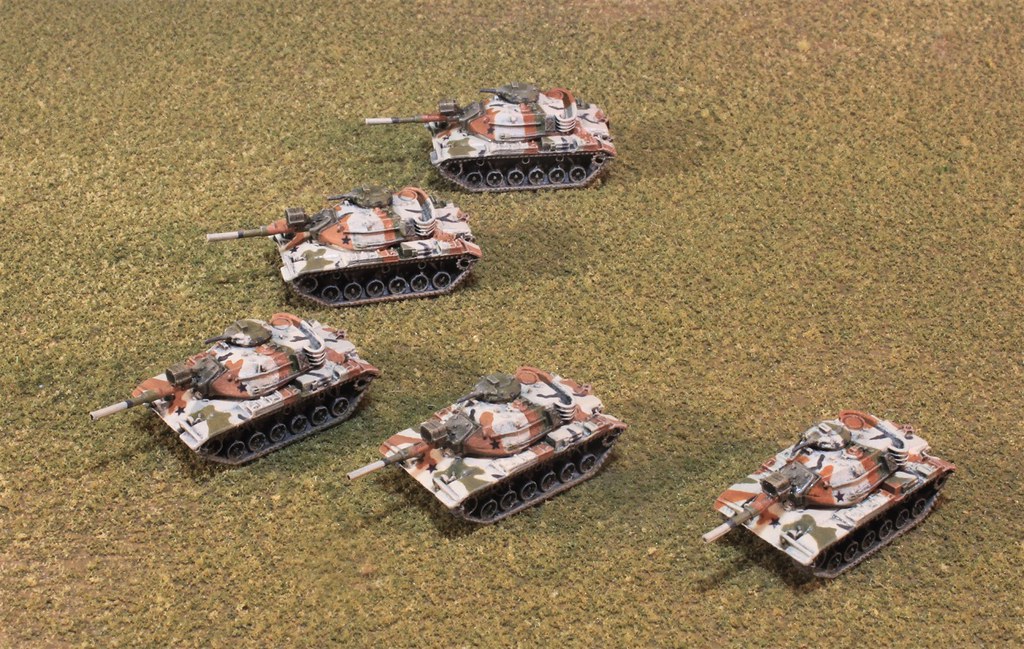 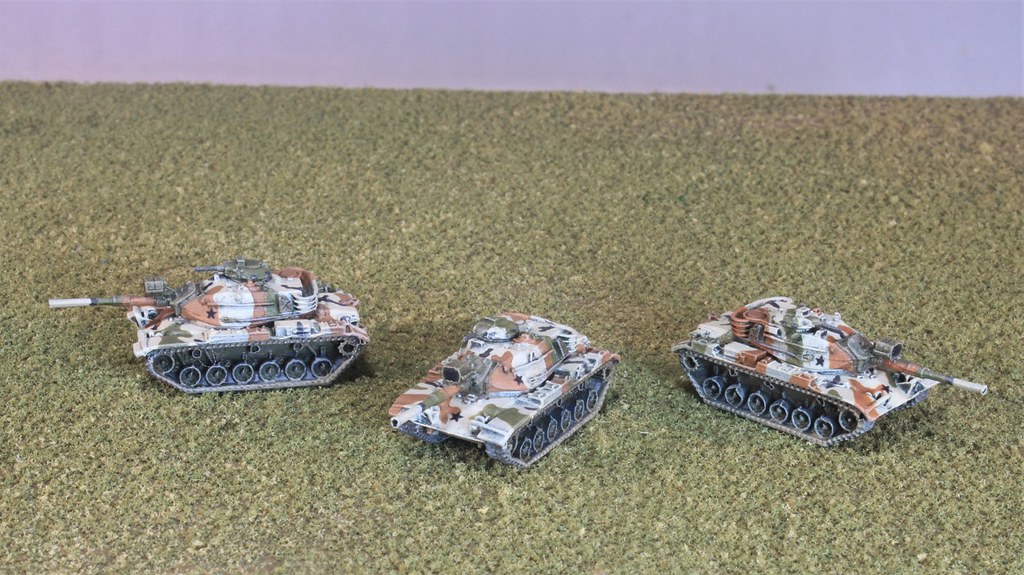 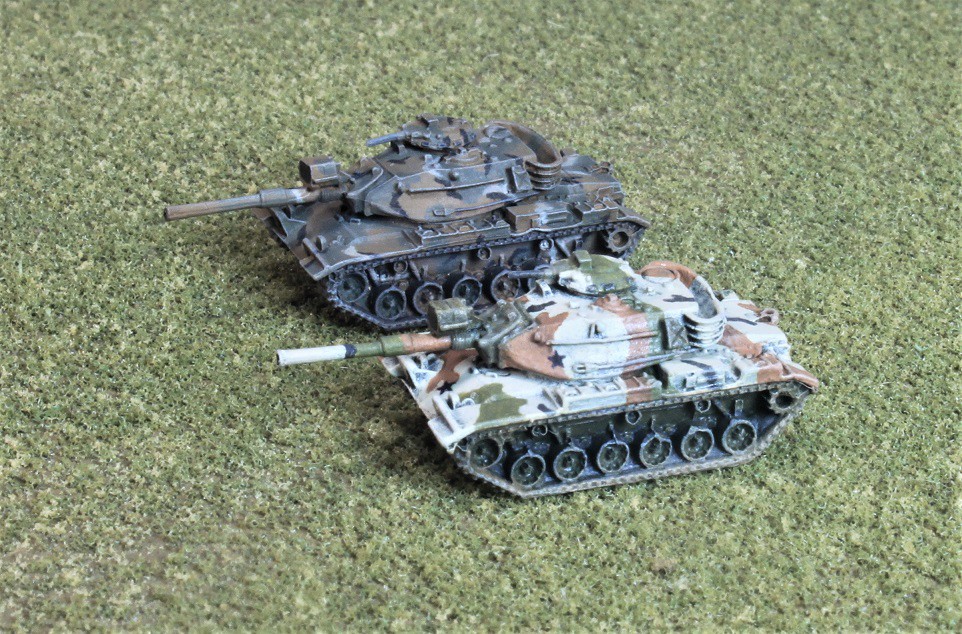 I couldn't find any references that showed any officially approved patterns for this scheme and the photos I did find of vehicles wearing MASSTER showed great variety in patterns. I based my interpretation on tanks belonging to 3-64 Armor of the 3rd armored Division (link to pictures: https://www.flickr.com/photos/avatar1/3 ... ateposted/) to include what appears to have been retaining the OD in the running gear portion of the tanks. I also noted that MASSTER painted vehicles often wore black stars, so I put them on my models. Much thanks to Flight Deck Decals for making these available.

Judging the colors was a process of looking at as many examples of the scheme as I could find and compensating for apparent light conditions then trying to get the right tones. I think I got fairly close.


Begemot
The summer grasses.
All that remains
Of warriors' dreams.
--- Basho
Top

I arrived in Germany in '75. The units I saw were either OD or USAREUR MASSTER. We painted our stuff MERDC in '76-'77. Up until then, they were the ugly MASSTER. As it was explained to me, the MASSTER was designed to defeat reconnaissance cameras, not the human eye. You can find some vehicles in MERDC in the '75 REFORGER book by Tankograd, however, I'm not sure the photos were properly dated. I was an evaluator on Reforger '75, watching a 2nd ACR tank company. I did not see any MERDC-painted vehicles, but we were in a different area than that depicted in the book. HOWEVER, I don't think 3AD started painting MERDC until Fall '76. 1-39 Inf vehicles ARE listed in REFORGER '75painted MERDC, but I didn't get down to Baumholder during that tour around motor pools. 8th ID vehicles I saw were MASSTER. I was surprised to see several folks reference vehicles still being OD. My observation was that tanks in the field got covered in dust or mud sufficiently and could easily be picked out in any tree line.

I agree that patterns for MASSTER are hard to figure. Guidance was published, but not followed very well. I saw a lot of variety. As for MERDC, the initial issue of paint did not include sand, so our MERDC was only three colors. I also remember that some units hadn't gotten any green for the MASSTER job.

You did very well with both color selection and pattern. I try to go from memory first, then references. I always admire your work. It is very realistic. This period of MASSTER to MERDC is my favorite, lijely because it was my first tour and in 3AD. I will be happy to even get somewhat close to your standard.
All blessings flow from a good mission statement.
Pogo was right. So was Ike.
"A Gentleman is a man who is only rude intentionally." (Churchill)
Give credit. Take responsibility.
Top

And the MERDC M113s in the Tankograd Reforger '75 would be photos from a later year.
All blessings flow from a good mission statement.
Pogo was right. So was Ike.
"A Gentleman is a man who is only rude intentionally." (Churchill)
Give credit. Take responsibility.
Top
Post Reply
99 posts