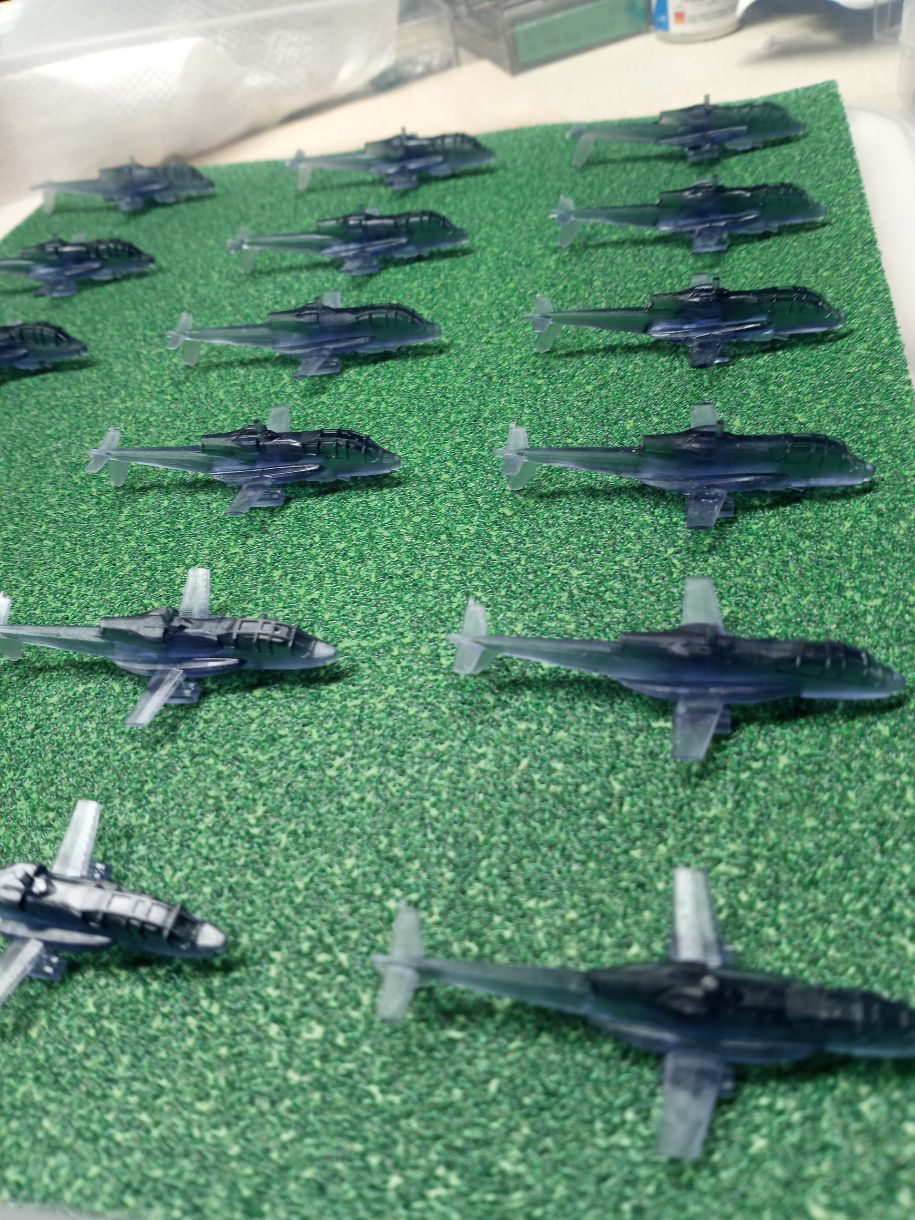 That's my second AH56 bn. It's 3 short for now. 1st bn is all 18. More to be done soon.
All blessings flow from a good mission statement.
Pogo was right. So was Ike.
"A Gentleman is a man who is only rude intentionally." (Churchill)
Top

That's my second AH56 bn. It's 3 short for now. 1st bn has all 18. More to be done soon. They will soon be joined by an S67 battalion, 3 AH64 battalions, a medium lift bn of UH 60s, and a heavy lift unit of CH47s. Might give it a couple leg infantry battalions to carry around, as well, for an air assault element. There will be RAH66s added, too. This stuff probably won't follow TOE quite so closely. This command will have ground cavalry primarily as security. It will not control the divcav or ACR units. I can, however, consider giving those units their aviation elements - probably Cobras and Hueys. I SHOULD be building this unit as a combat aviation brigade for the division, but it's awfully big for that. Gotta get more infantry...

Thanks for posting the pics, Chris.
All blessings flow from a good mission statement.
Pogo was right. So was Ike.
"A Gentleman is a man who is only rude intentionally." (Churchill)
Top

Panzer,
Excellent, your journey to the dark side is well on the way.
Soon you will take your seat on the security council of the U.I.N.
Top

U.I.N. is a mere puppet for CofC, meant to cloak CofC's machinations in an air of legitimacy, but that's all it is...AIR! There is little liklihood of GS EVER sitting on even a latrine bench in the U.I.N.

For now, GS is busy fitting its Cheyennes with night vision and Hellfire capabilities.
All blessings flow from a good mission statement.
Pogo was right. So was Ike.
"A Gentleman is a man who is only rude intentionally." (Churchill)
Top

I am offended.... HIGHLY offended to read such rubbish from GS/PG. The UIN is not a puppet of the CoC.
I would be easier if that were the case, or I think it would. There are resolutions submitted at least monthly, sometimes more often, that attack or condemn the CoC or one its member nations.
Who of you have been slammed by the UIN? Or by CoC?
Chris
Top

I finally finished my pack of AMX-10Ps to go along with my AMX-30B2s. Both packs were website specials and they're the only French vehicles I have. I suppose I will need to get some French infantry and artillery now! 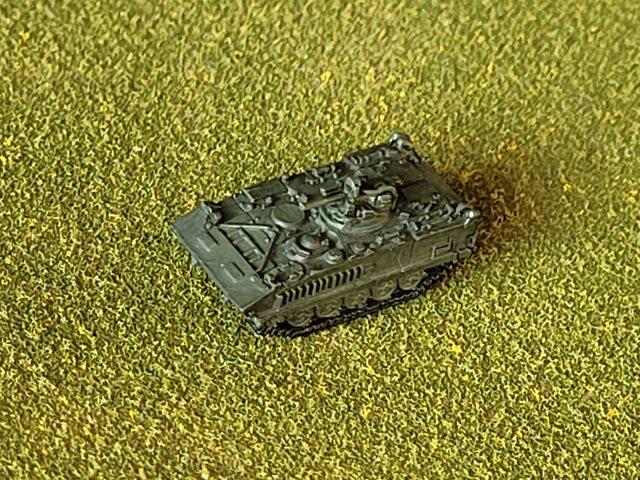 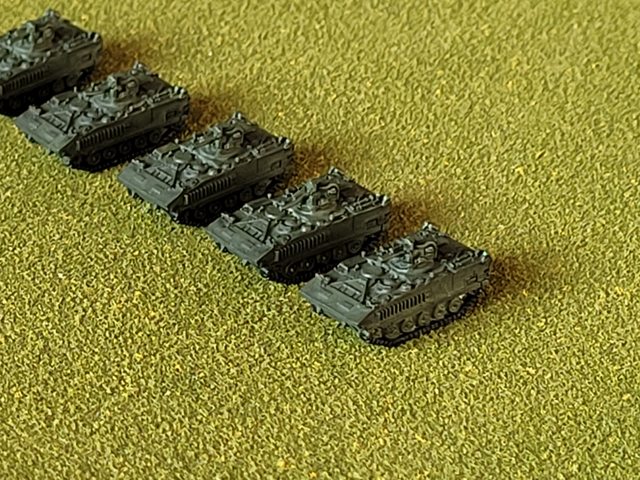 3D printed trucks, with a base coat on. 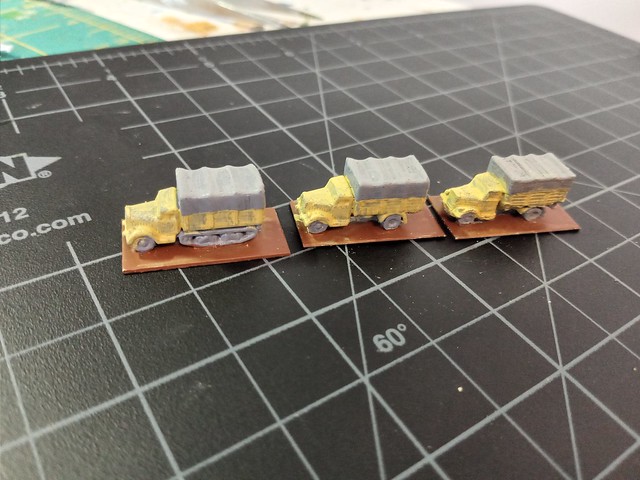 Redleg,
Nice looking AMX-10Ps. Did you shade or ash those? It appears that you did something that shows depth.
Mark,
Cool print.
Chris
Top

Be offended all you want. UIN is an instrument of CofC and does its bidding. Its mouth is your mouth.
All blessings flow from a good mission statement.
Pogo was right. So was Ike.
"A Gentleman is a man who is only rude intentionally." (Churchill)
Top

Thanks Fellas. I didn't do anything fancy on the AMX-10s. Spray a base coat, then dry brush a lighter shade of green, and then a black wash. My wash skills are still not all that great, but I will keep practicing!

Here are some pics of my company of early production M4A1 Shermans. These models came out from GHQ a few years back now. Just shows how slow I am to make my way through all the stuff I want to do.

I thought I had already posted them in this thread. But I have looked back through a full year (back to last October) and do not see them. So maybe I didn't. If this is a duplicate, I do apologize. I'm not trying to make you tired of Shermans. 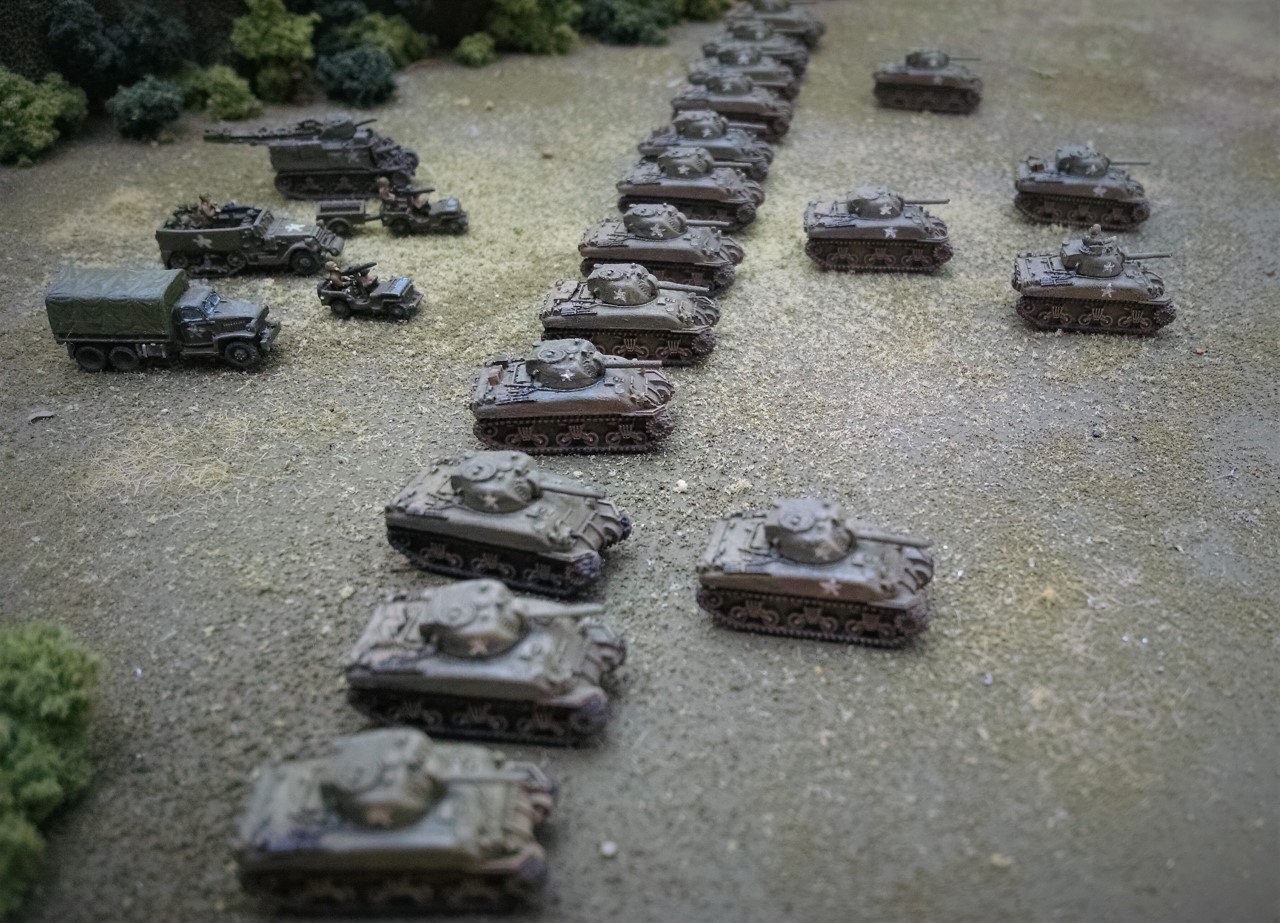 Here is the full company at parade. This is the model of Sherman that is best suited for Tunisia and Sicily, and can also find a place (perhaps mixed with more advanced M4A1 Shermans in GHQ's more recent releases) in Italy or even Southern France scenarios. 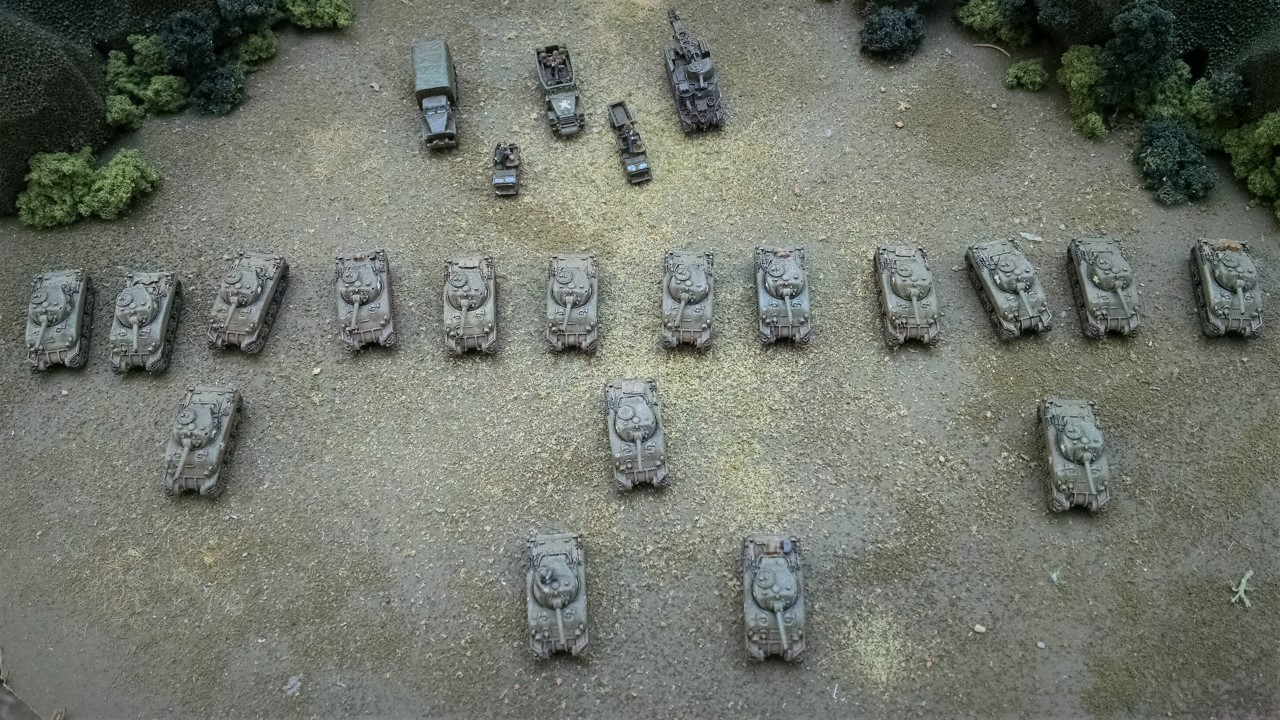 An overhead view. I am showing the company with the HQ support units (admin, supply, and recovery) as well. 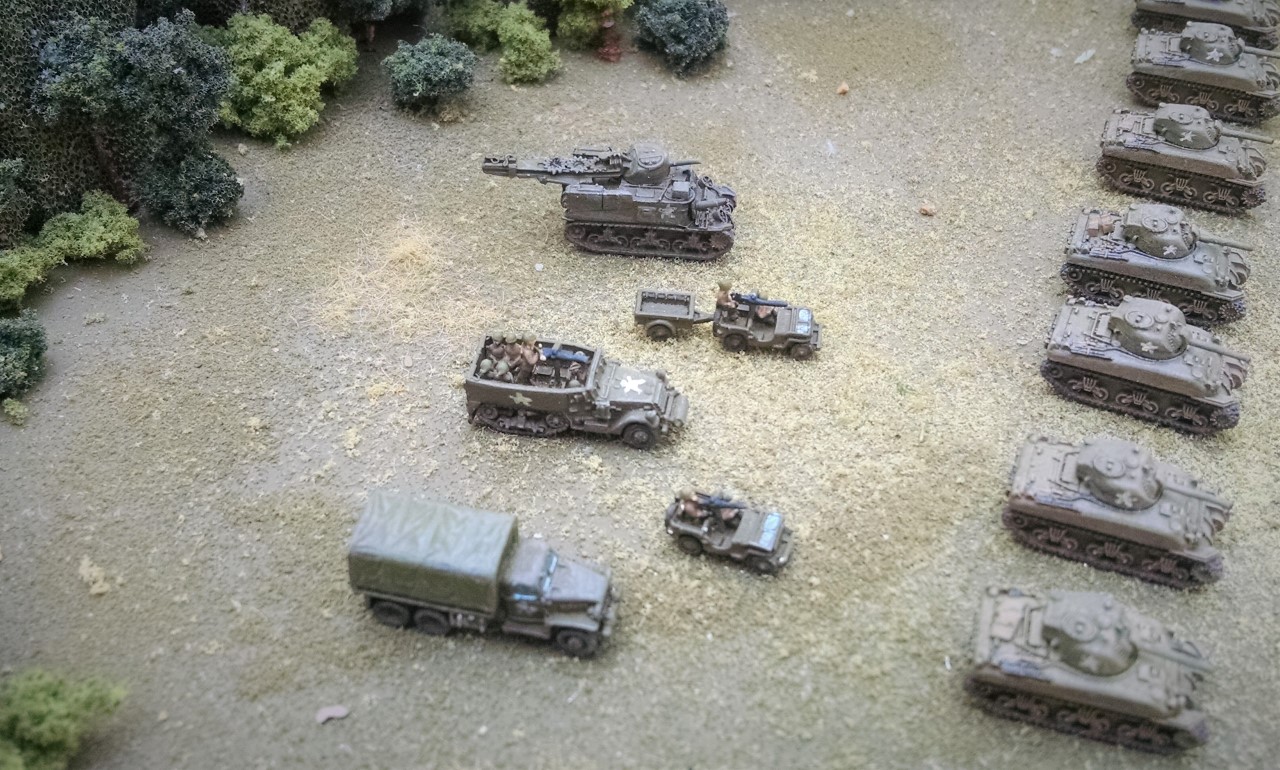 This HQ set can be added to any of my US tank companies. But I have enough such companies now (and planned in the near future) that I should probably make at least 1 if not 2 more. The open admin vehicles show crews (supply jeep, HQ company HQ jeep, and maintenance crew halftrack). These are mostly taken from the GHQ US Armored Infantry set (seated figures and gunners for halftracks). The seated figures in that kit come in braces of five side-by-side figures. I find that makes things a bit too crowded, so I cut them down to 2 or 3 figures, and often cut single figures off of the brace. Single seated figures are quite useful as crew figures. Often they need to have their feet or legs cut off as well (for example passengers in jeeps).

I also use figures cut from the mortar or MG crews of GHQ en-bloc support infantry packs. These crouching figures can be used as more active poses in vehicles. 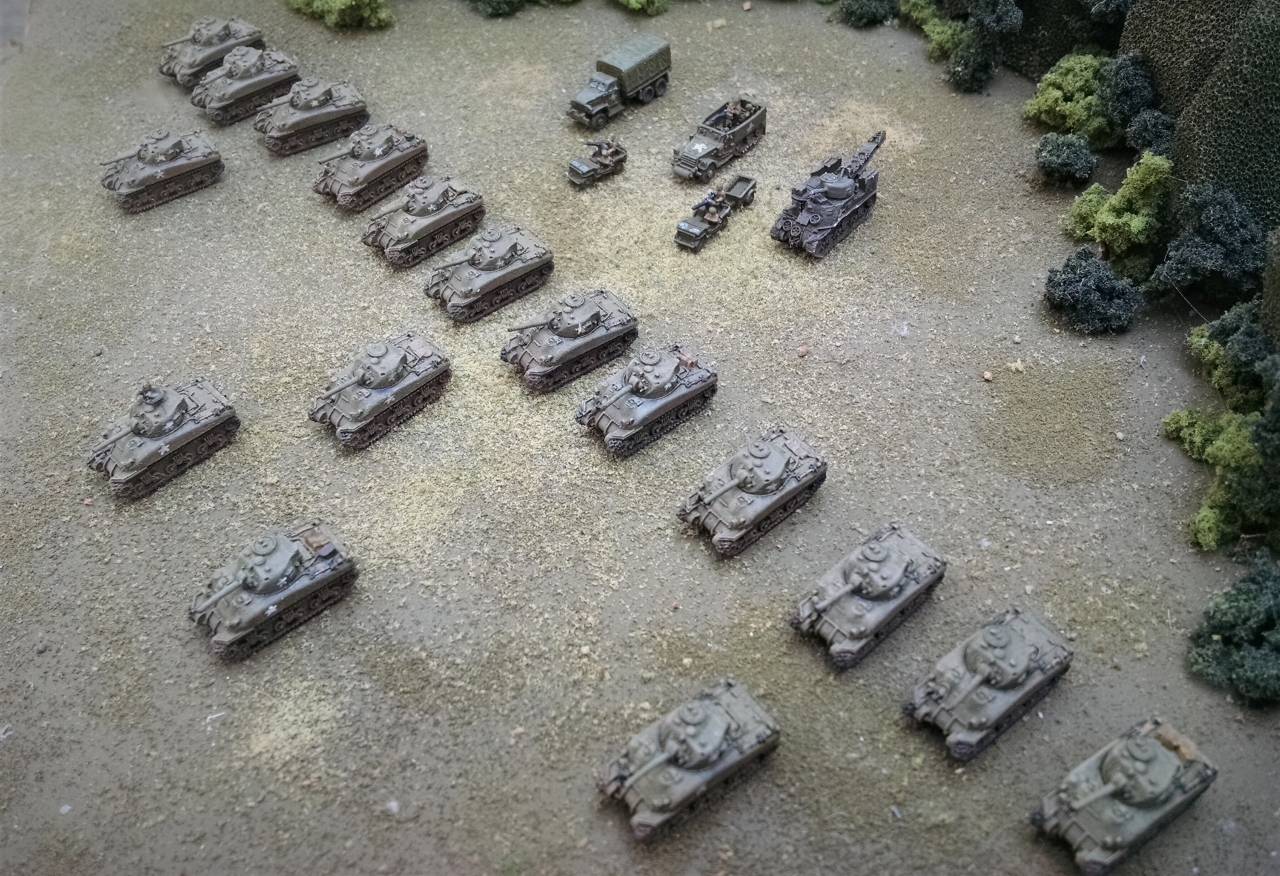 All of the tanks have stars on the turrets. Command tanks (platoon or company) also get stars on the hulls. The platoon sargents and the company XO's tank also get ammo boxes etc. on the rear deck. This gives me ways of tracking my command units at game time that is not obvious to my opponents, and adds a bit to the overall appearance of the unit. 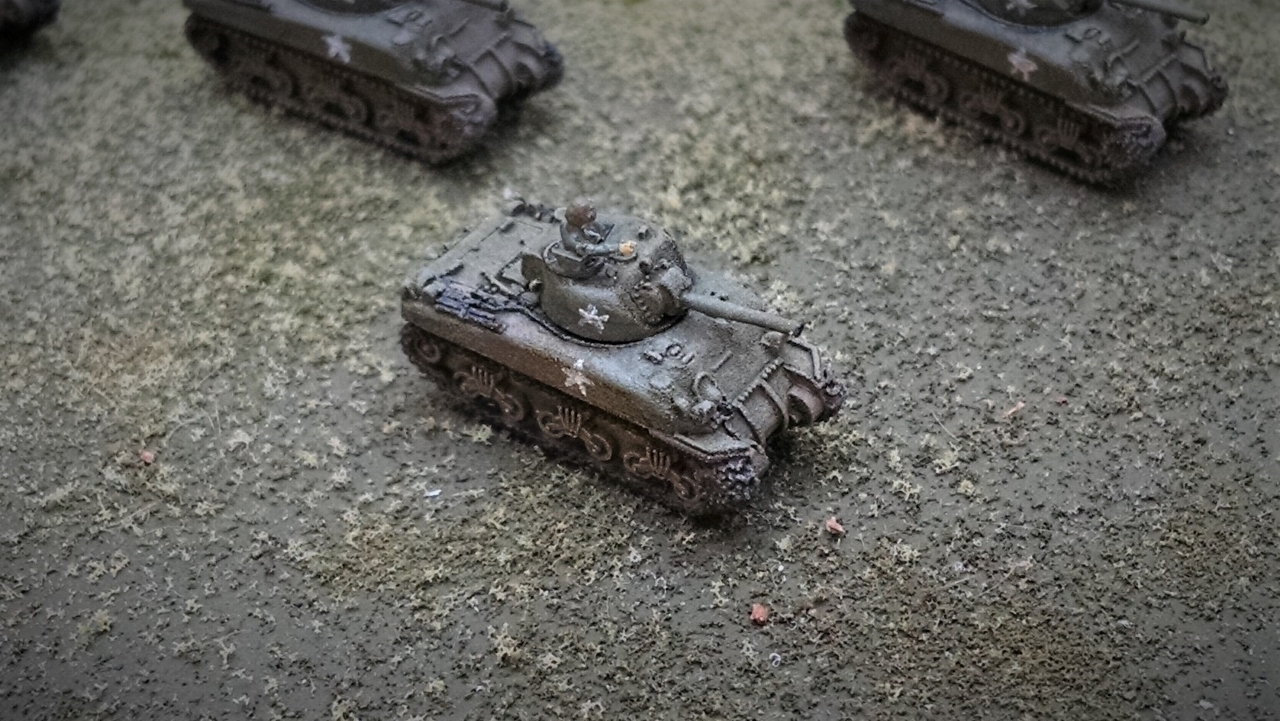 The company commander's tank not only gets the stars, but also gets Brad Pitt up in the turret. 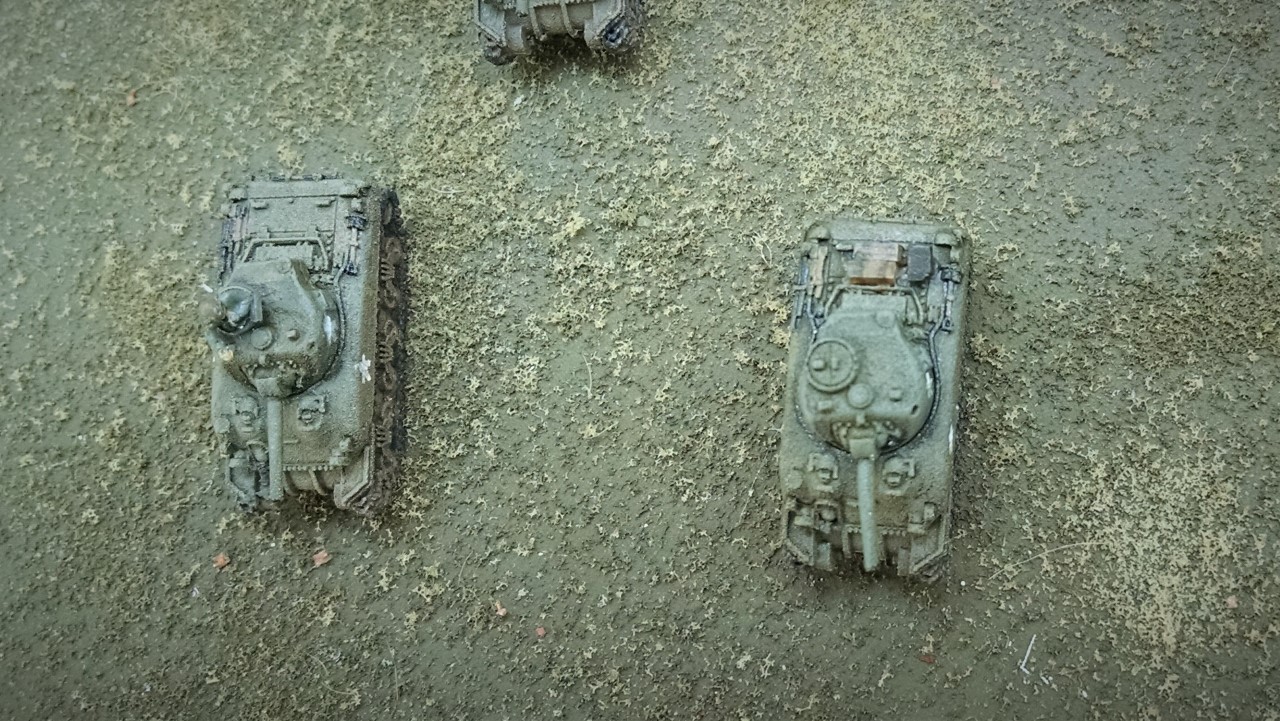 The figure is from the US Artillery Crew set, with arm bent to look like he is holding an intercom mic. The split-hatches are just plastic sheet cut to shape. The turret hatch was drilled out just a bit to provide a firm seating for the cut-off figure. 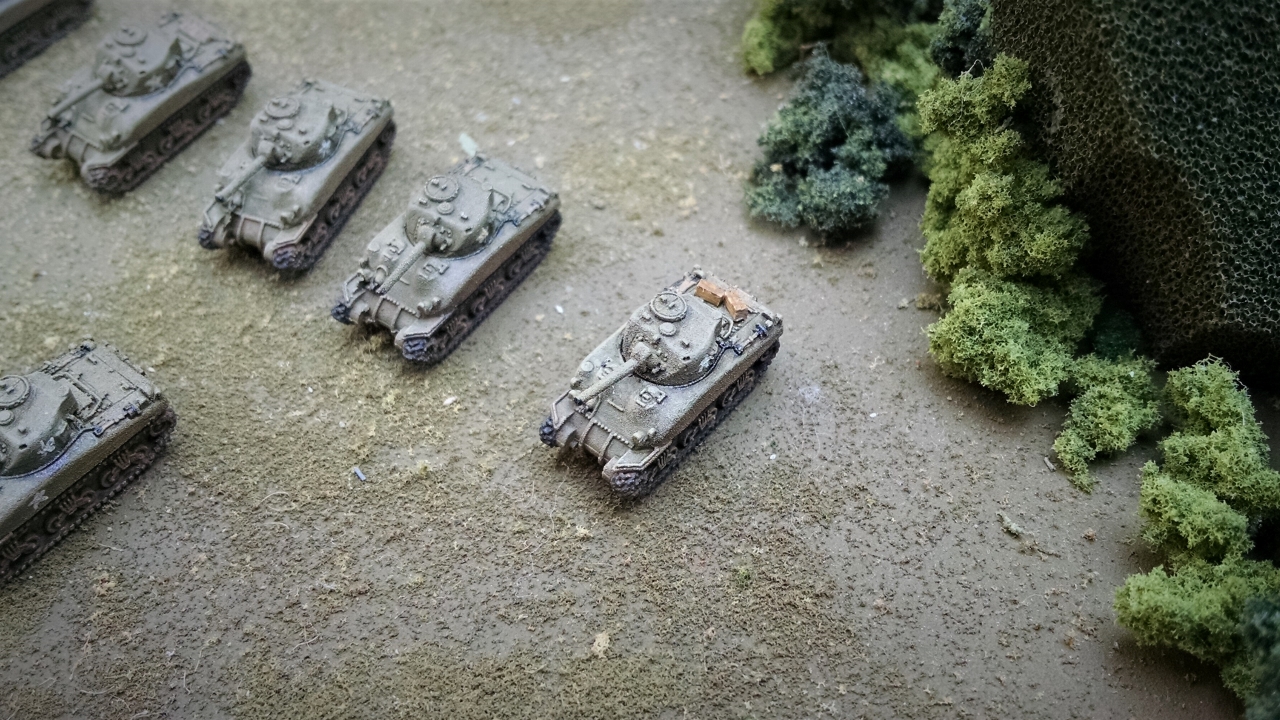 A lot of folks don't know that the Sherman had a smoke-grenade launcher in the left front of the turret roof. The beautiful GHQ models show this detail clearly, even though most rule sets don't account for this.

They are really very nice models. Love my GHQ Shermans!

Speaking of Shermans. Here are some Sherman IIs that I painted a few years ago. They saw some action in an El Alamein game we played a while back. 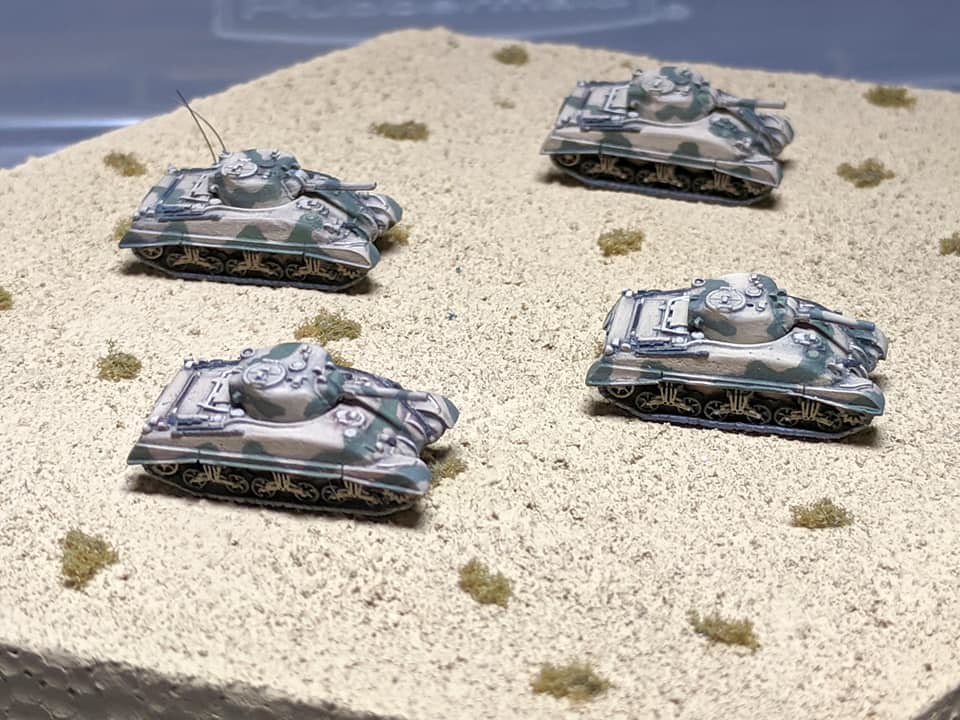 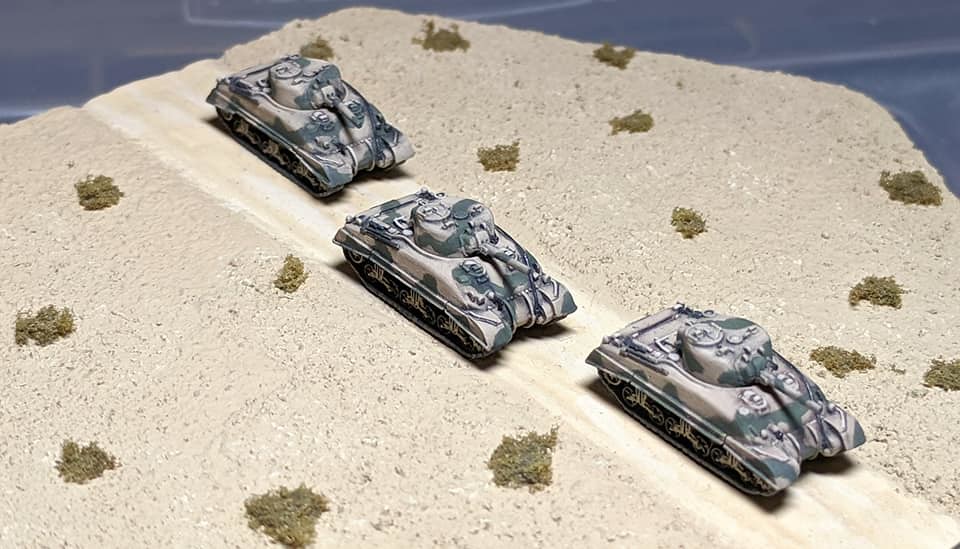 Geez, you guys really want to make me get started on my WWII US tank battalions! I'm still trying to finish up my mid-50s stuff!
All blessings flow from a good mission statement.
Pogo was right. So was Ike.
"A Gentleman is a man who is only rude intentionally." (Churchill)
Top
Post Reply
5751 posts