Thank you very much, Chris!

Here are some more pictures showing the action on Turn 1. The Germans decide to activate the Panzer IV platoon during their 2nd impulse. The Panzer IIIs at the top of the first picture have already moved in the first impulse.

A Panzer IV engages the lead T-34 after making its move across the bridge. This causes the Panzer IV to shoot at reduced effectiveness for moving. Despite having a lesser chance of a hit at this range, the T-34 is hit. The result on the Kill Table indicates 1 point of damage so the T-34 is knocked out.

The German player finishes the impulse by moving the remaining Panzer IVs forming a line abreast astride the road. 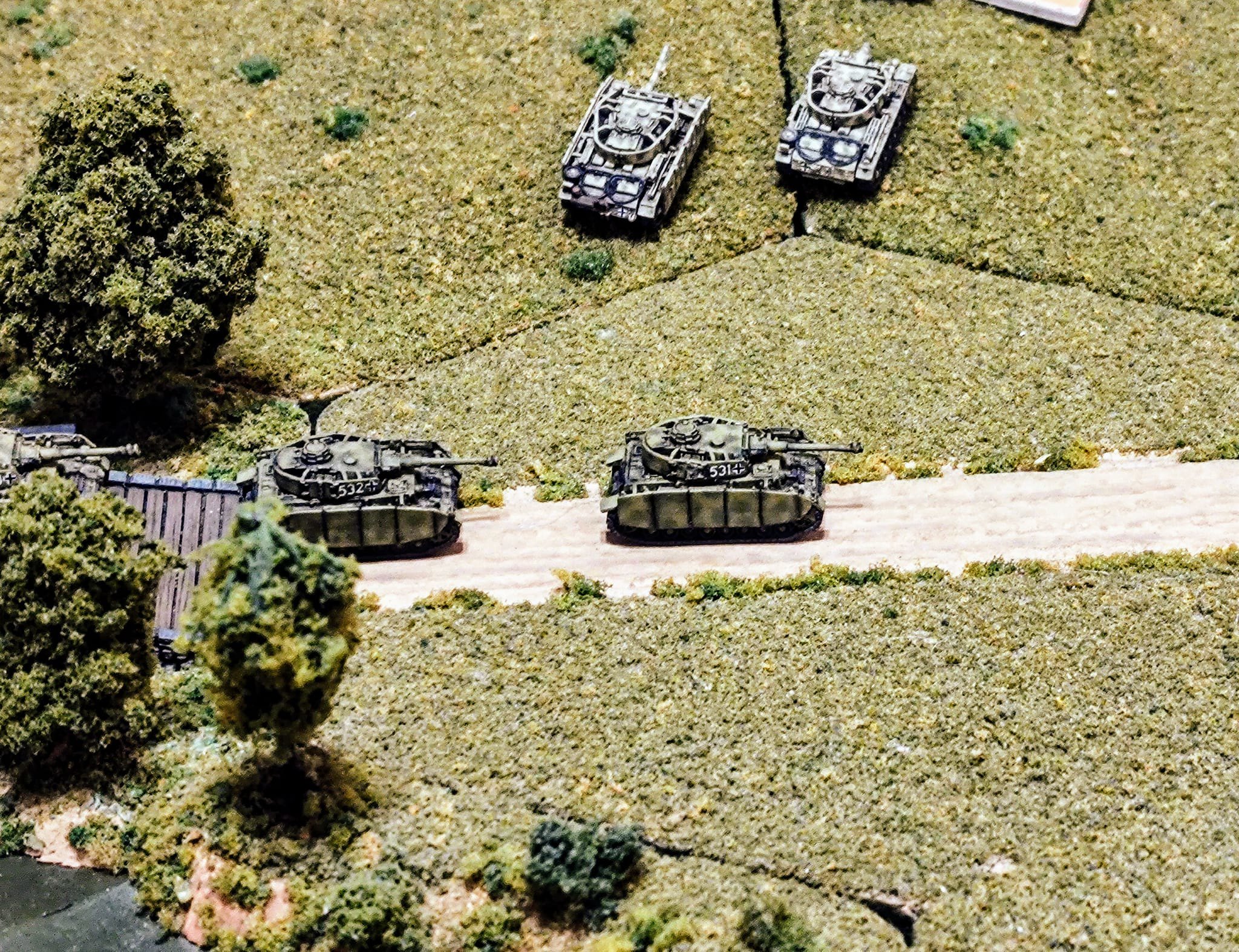 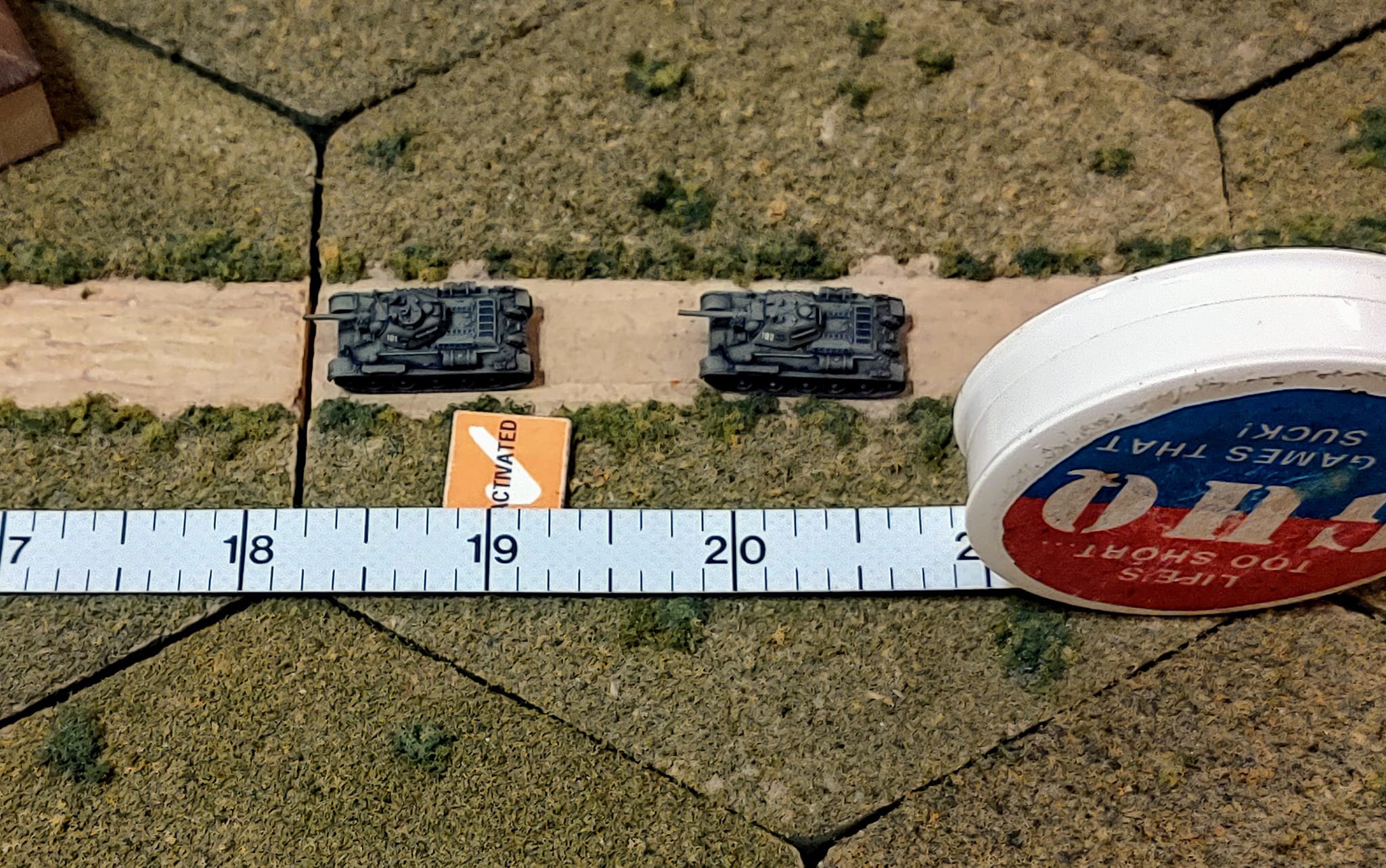 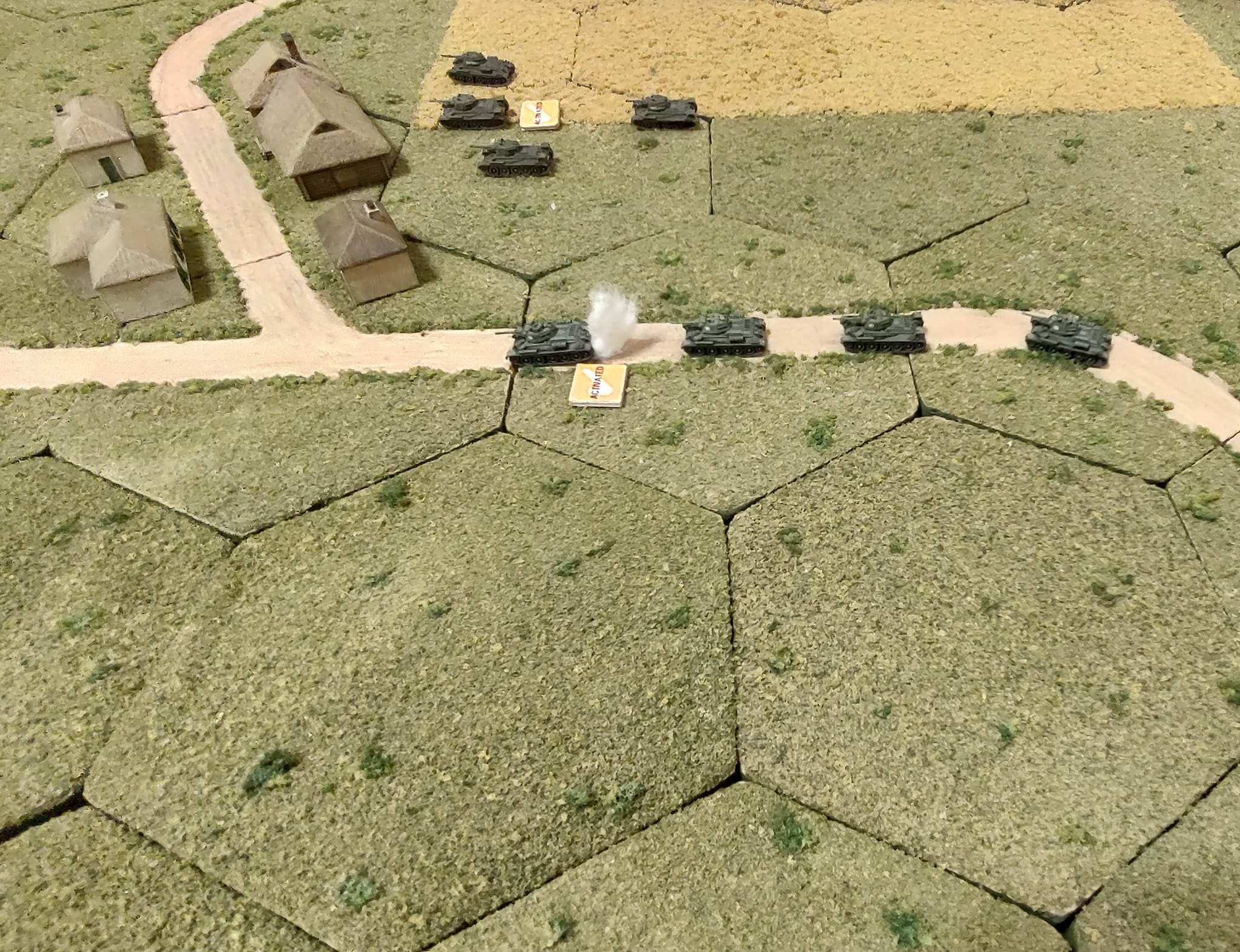 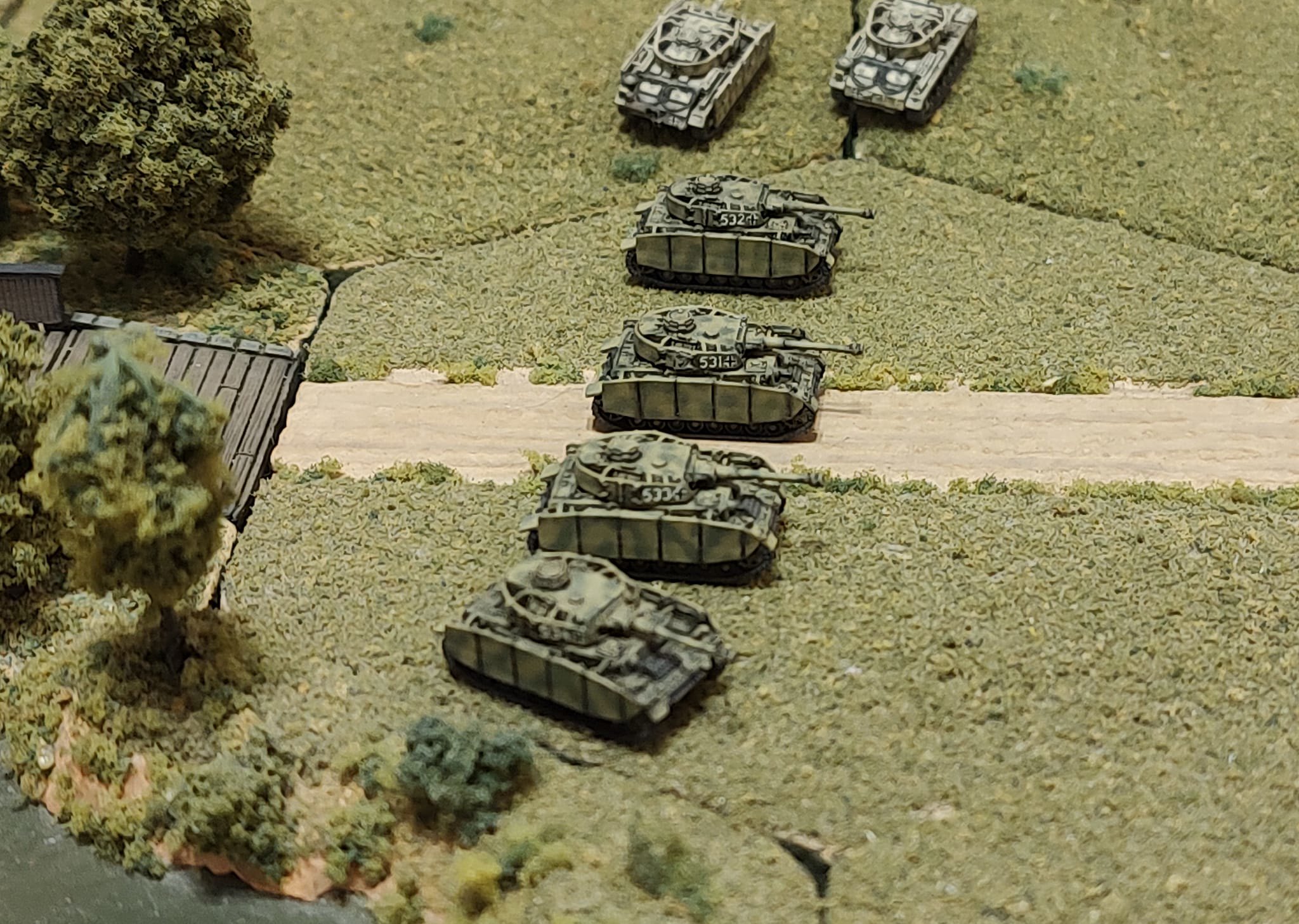 Russki better get behind those cottages for a little cover before the big charge??
Top

Hi Burt! Right now the Russians seem to be getting the worst of it. The Germans have managed to knock out 5 tanks so far with a couple more immobilized. We shall see how things develop.
Top

In Soviet Russia, soc.ial.ist censors YOU.
Those who beat their swords into plowshares will plow for those who don't.
Top

Here are more pictures of my solo Mein Panzer game. These are from Turn 2 as the battle starts to develop. 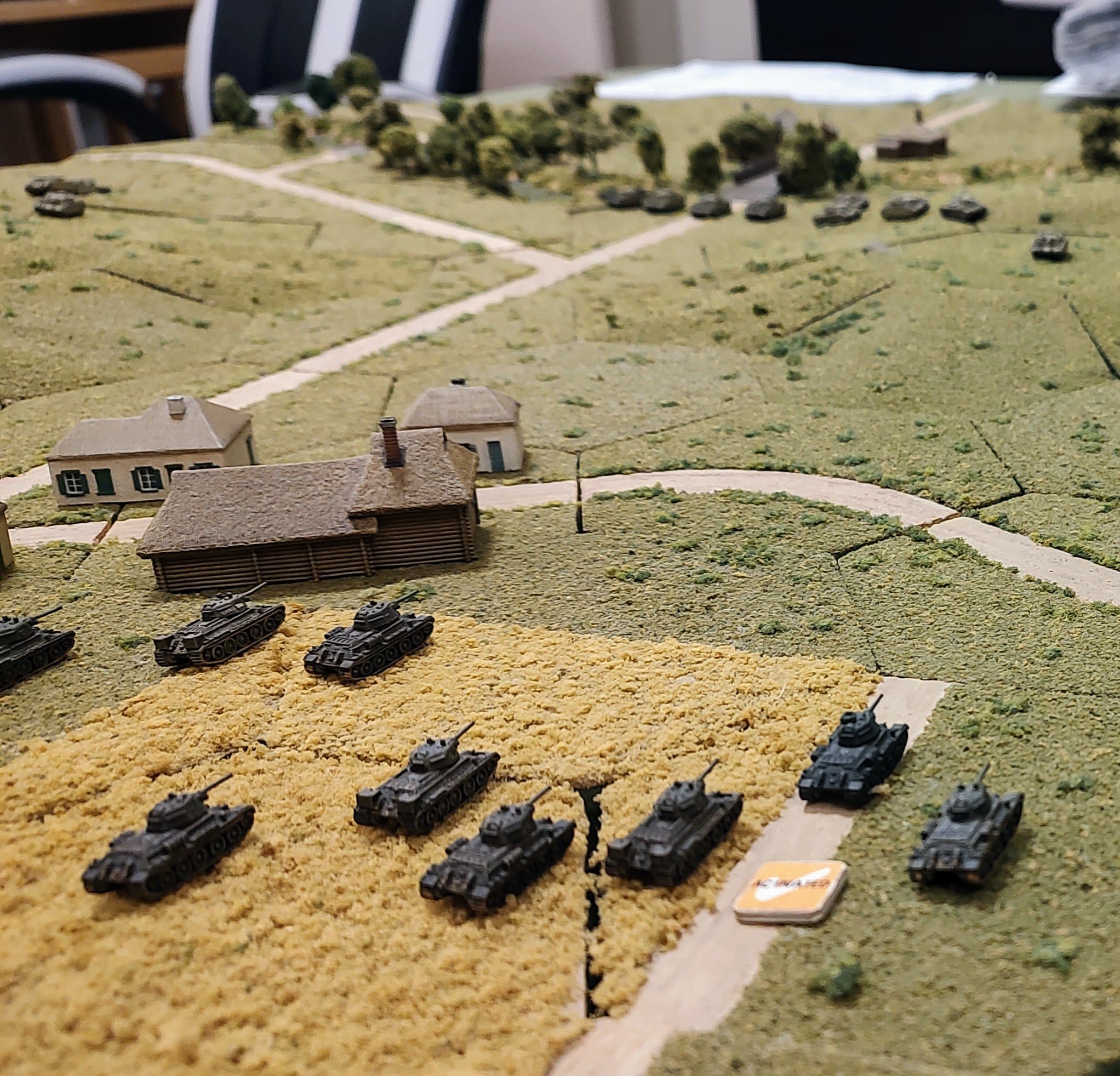 On the Russian right, 2nd Company advances to engage the Germans on the hill to their front. 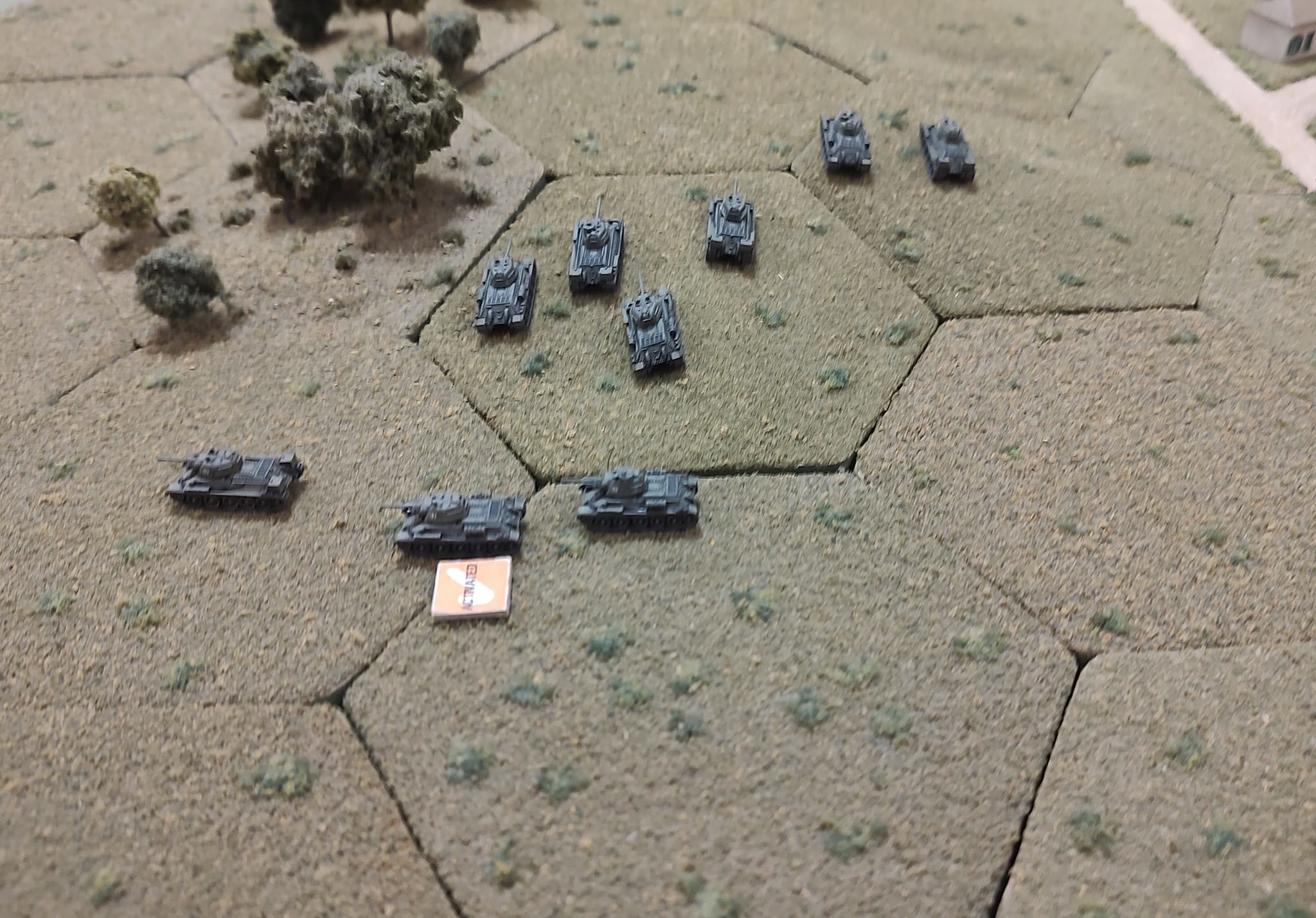 On the Russian left, Part of 1st Company starts to ascend the hill to its front while the CO and the remaining 2 tanks of 1st Platoon swing left. 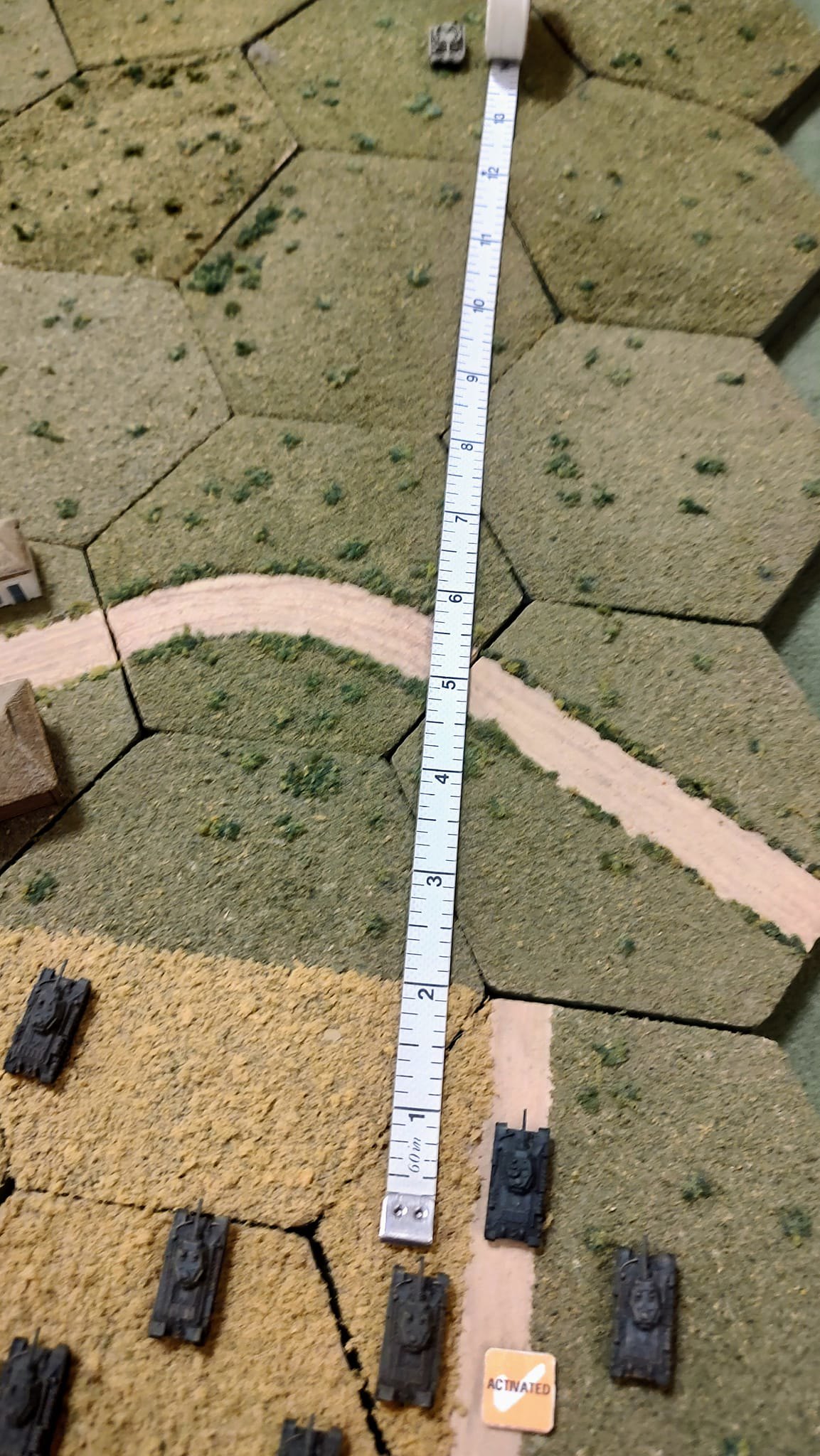 A lone exposed Panzer III on the hill is taken under fire by a platoon from 2nd Company. First shot misses. 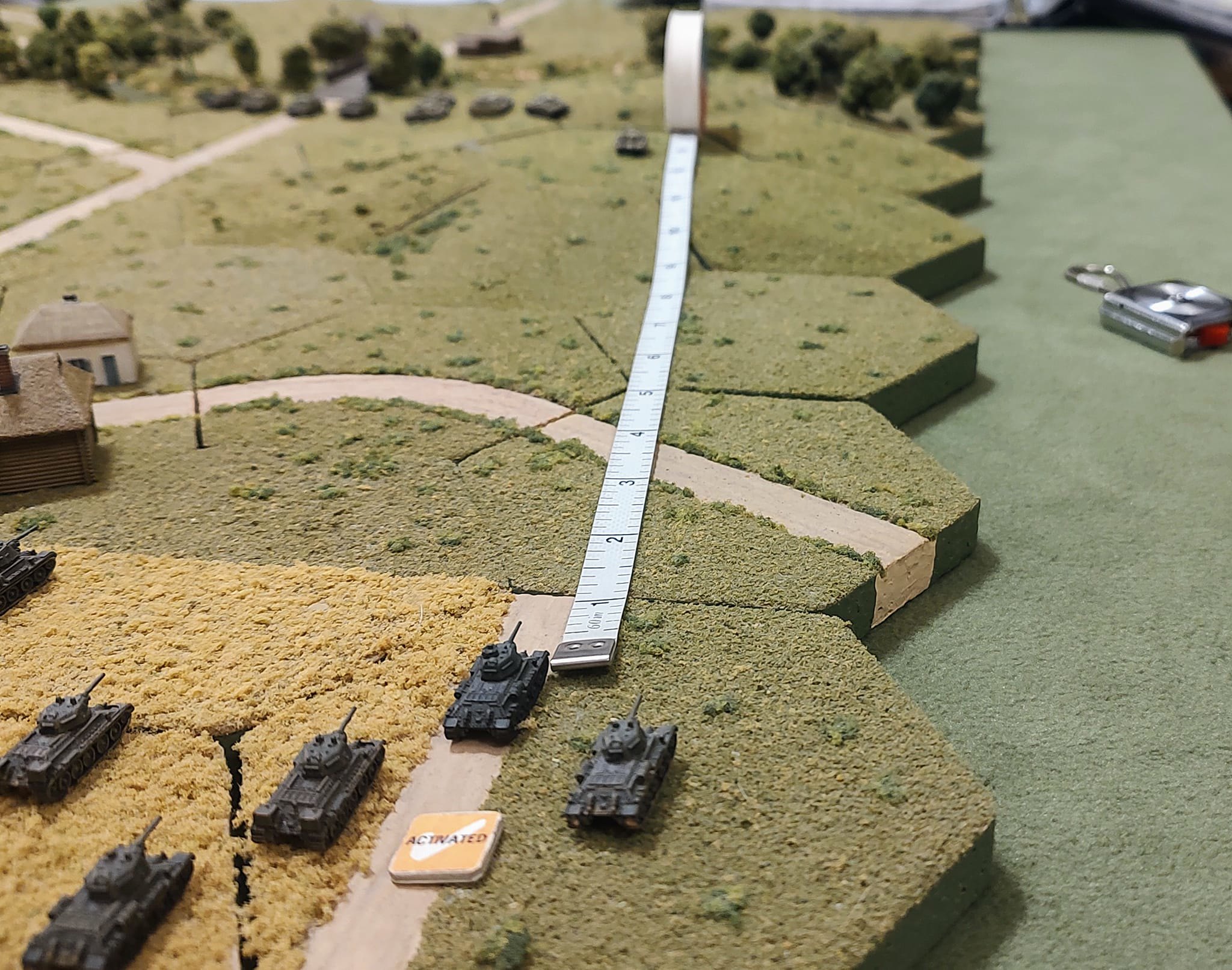 The third shot also does not score a kill. That is one really lucky Panzer!
Top

Once the Germans reach that hill in numbers... The T-34s will have problems.

Keep it comin' there, Pete.

Loving every pic, every scene.

Thanks very much, Mk1! There will be more coming soon.

Polish GI, the T-34s did have some issues trying to hit the Germans in this game, especially early on. You will see how things develop over the course of the game. In Mein Panzer, everything is based off of troop quality using a 20 sided die. The Germans at Veteran status have a TQ of 12 which is their base number. All other modifications either add or subtract from this number.
The Russians are classed as Regular for my game. This gives them a TQ of 10 as their base. With no other modifications this means they start out at a 50% chance of success. Of course there are modifications to the die roll, especially when firing, including range, terrain effects, target moving or not, and also even target size.

I wanted to give a test of quality vs quantity here as the Germans are outnumbered and theT-34s are clearly better than the Panzer IIIs they are facing. The Panzer IVG/H has a better gun but does not have the speed and is a bit outclassed in armor as well. Better German troop quality does make up for this a bit at least.
Top

What Pete has described above, in terms of rules mechanisms, are key to my appreciation of the Mein Panzer ruleset.

I have tried many rulesets for microarmor over the years (and years, and years). Very few were ever satisfying to me on one key test: T-34s vs. Pz IIIs.

My reading of history is that the T-34 was the superior tank in terms of protection, mobility, and gun performance. And yet the Pz III outfought the T-34 again and again. Some rules just abstract that all away giving Pz IIIs a better combat rating (however that is defined). I find that very unsatisfying.

The Pz III was the inferior tank in all 3 of the "big 3" that everyone wants to talk about when they assess tanks. Do the rules just gloss over that and tell me it was the better tank? Then I lose interest.

MP gives me the ratings for the armor, the mobility, and the gun. I can see that the T-34 is better. But they can often be outfought by Pz IIIs because of other factors -- namely crew quality (shooting more often, hitting more often) and tactical flexibility. Give them a few Panzerganate 40 rounds and they'll do even better!

This is one of the reasons I like this ruleset so much. You can out play the "superior" tanks, and actually see how the fighting turned out the way it so often did.

Pete, keep it coming. Loving every turn of the story!

Those are some very excellent points you make, Mk1. Your input is very much appreciated.

Back to the game.

We are still on Turn 2. Here are some more pictures showing the action against the lone Panzer III on the hill.

The range for the 3 Russian tanks firing is 13 inches - give or take. This range incurs no penalties or positive modifiers.

The Russian TQ is 10. If this were a straight shot, they would need a 10 or less to hit. HOWEVER. The German just moved in his last turn so still gets a -1 applied for that. In addition, the Russian has a -3 penalty applied for being at a higher elevation. There are no other modifiers that apply to the target in this case as the Panzer III has a DM(Defensive Modifier) of 0.

Since the Russian is only firing and not moving at all this turn, he gets the OM1 modifier which is 0. If any of the T-34s move using their bonus move, that tank would drop down to OM2 which is -4 for the T-34.

As it is, the Russian needs a die roll of 6 to hit the Panzer III.

The first tank shoots and rolls a 10. This is a clear miss.

The second tank shoots and rolls a 12. Another clear miss.

The third tank shoots and does score a hit with a roll of 3.

Now we go to the Kill Table to determine any damage to the target.

Here are some of the stats for the T-34. Its armor piercing round (AP) is rated at 9.

Here are the stats for the Panzer IIIL/M. On the right side of the chart you will notice that there is ratings for F/S/R/T which is the Front, Side, Rear, and Top armor ratings. This is clearly a frontal shot so the 7 armor rating is used.

If we compare the AP of 9 to the frontal armor rating of 7 there is a +2 differential. Before going to the Kill Table there are some other possible modifiers to determine the actual row to use on the Kill Table.

Here is a closeup of the AP modifiers table. At a range of over 12 inches to up to 24 inches the Russian suffers a -1 penalty for Low Quality Ammo. The Germans have High Quality Ammo but the Panzer IIIL/M will suffer from having a 50mm gun in the Less Than 57mm Section.

Based on that, the Russian will roll on the 1 row of the Kill Table to determine his damage. 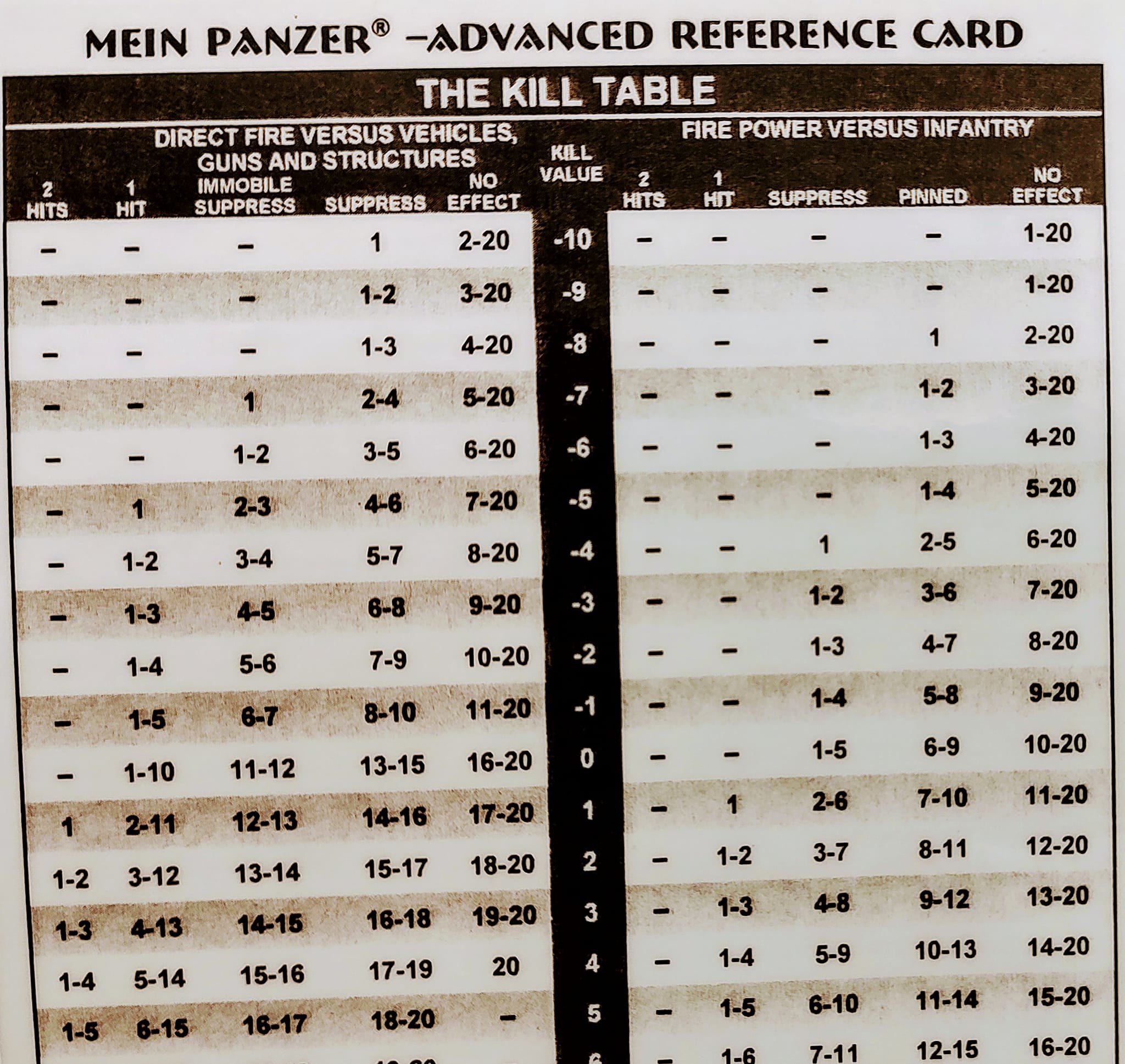 Possible results range from 2 hits with a roll of 1 all the way to no effect.

A result of 17 means No Effect. The round has either glanced off or else hit a non critical area of the tank.

A very lucky break for the German.
Top

On the other Russian first impulse of Turn 2 the 1st Company CO along with the remaining 2 tanks from 1st platoon decide to leave the road and head to the left flank. The rest of the company begins climbing the hill. 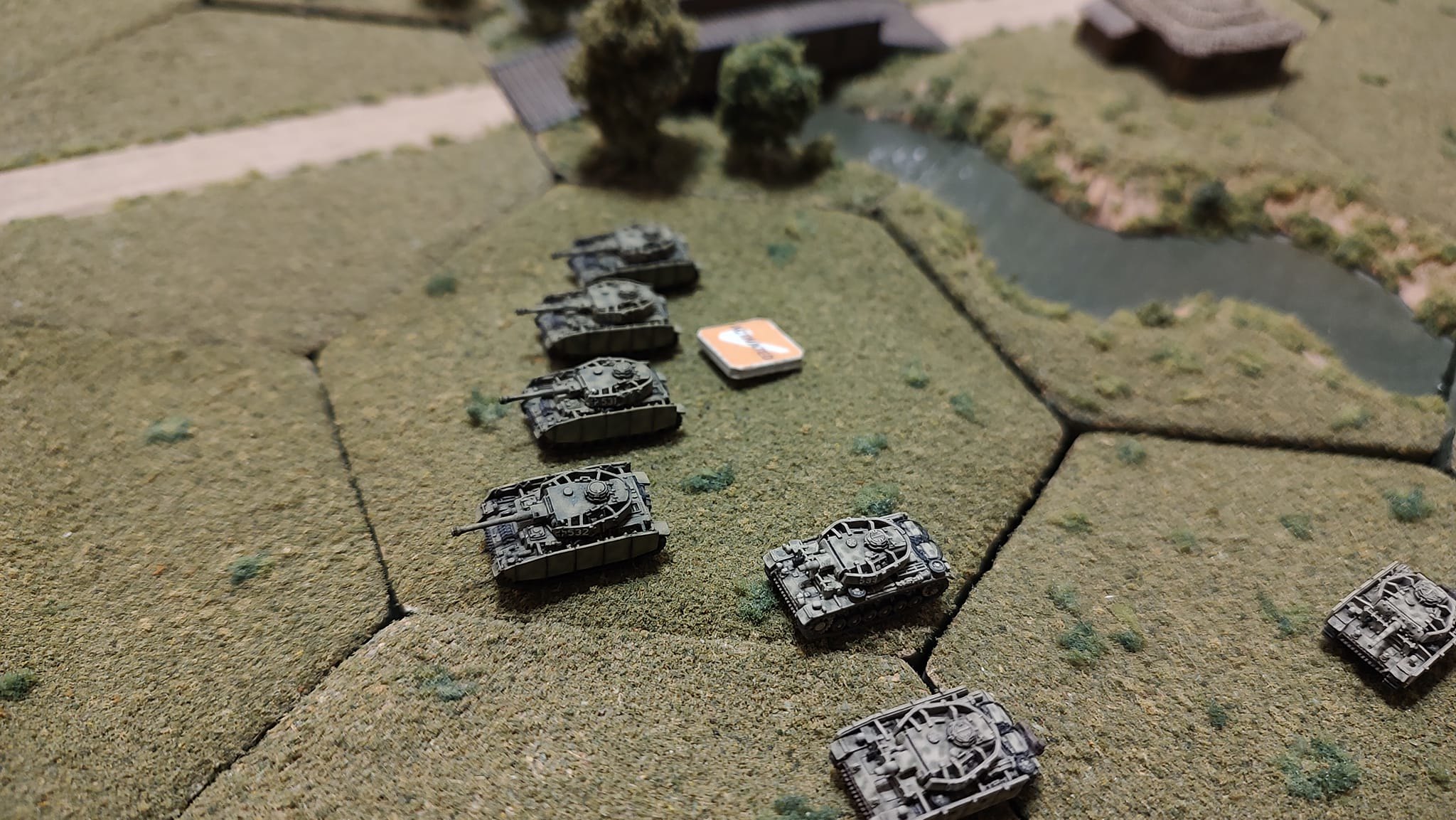 The German 2nd and 3rd platoons establish their positions on the reverse slope of the hill on the left.
Top

That is impressive! I too like the Mein Panzer rules. I haven't played them in a long time but I'm going to dust them off and see what I can get together. Your terrain is beautiful. You're inspiring me to begin working on a terrain project. My wife will be so happy! Thanks Pete for posting you guys going through the rules. It's a great refresher. Please keep the updates and playthrough going.
Top
Post Reply
707 posts