Thank you very much, Burt!

I have a pack of the GHQ Russian tank riders. As you said, they are a bit large for the tanks they are supposed to be riding. I would have preferred it if GHQ had done these guys is the same exact scale as the tanks and not the slightly larger infantry. I also would have liked a group of guys together similar to the way they did their old style infantry including the seated German and American infantry and German Panzergrenadiers.

I may use them for something but not sure what to do with them right now.
Top

I feel the same way Pete- I wish there was a way to modify the old style infantry stands to do that. I have a bunch of those and really no use for them...
in a perfect world, you’d mold the riders around the turret and then you could take them and the turret off and replace it with a normal turret - essentially to have a tank with no riders or with riders as you see fit. Mostly see this with T34s than anything else but perhaps Sherman’s as well.
Top

Hi Burt. I was thinking along those general lines as well. my thought was to have the riders clustered around the back of the turret and back deck. Perhaps GHQ could make them to fit a T-34 but they could still fit on a KV or IS tank as well.

American tank riders would be on Shermans and maybe Germans for Panzer IIIs, IVs, and StuGs. I would just have the figures on the tanks and not glued down. Just some thoughts here.
Top

Here are a few more pictures of my solo game of Mein Panzer. Although the Russians eventually prevailed it was a very tight game with high losses on both sides. The Russians were able to hold the battlefield at the end of the game. 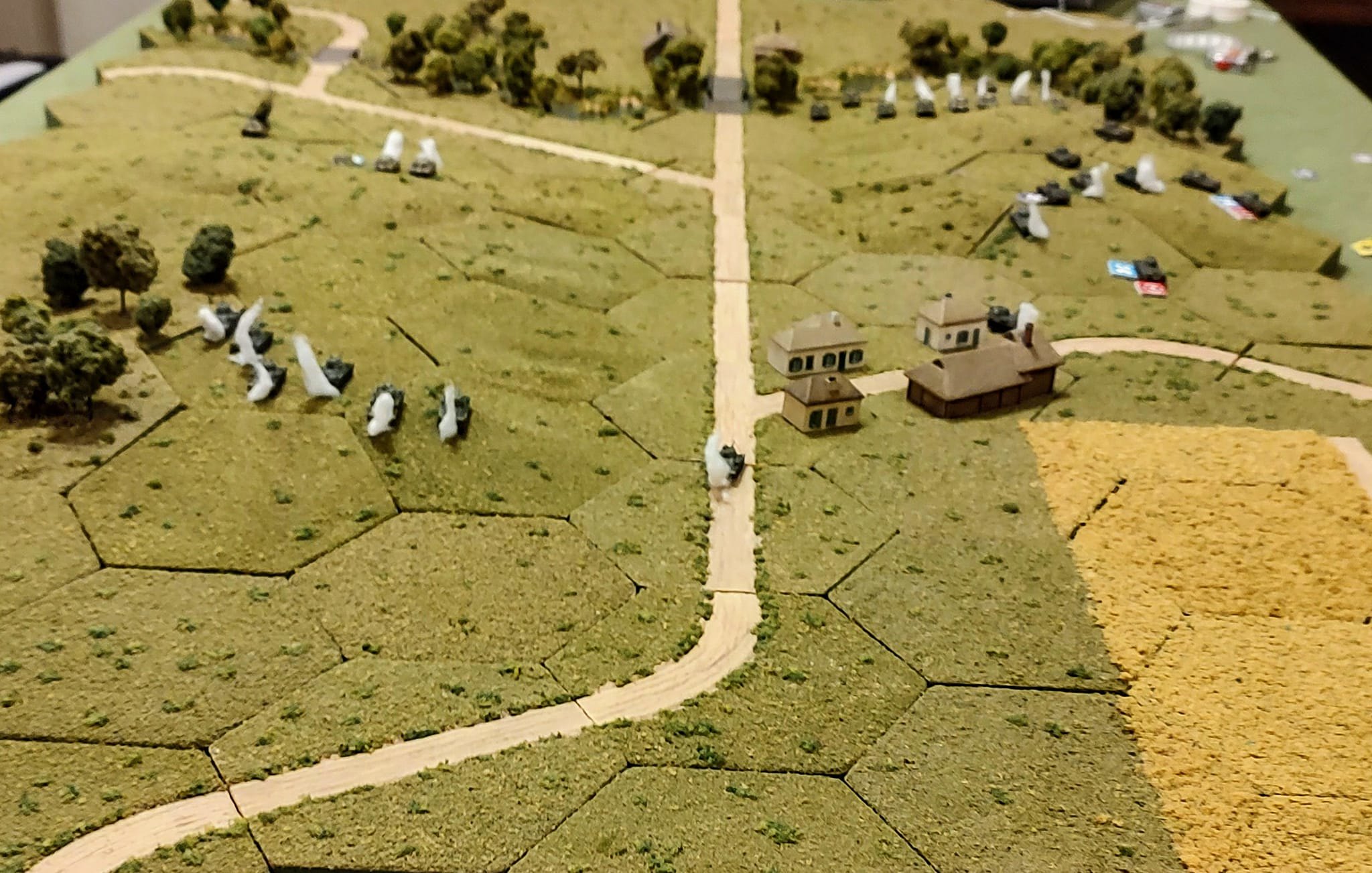 A view from the Russian side at the end of Turn 6.

A view from the German side. 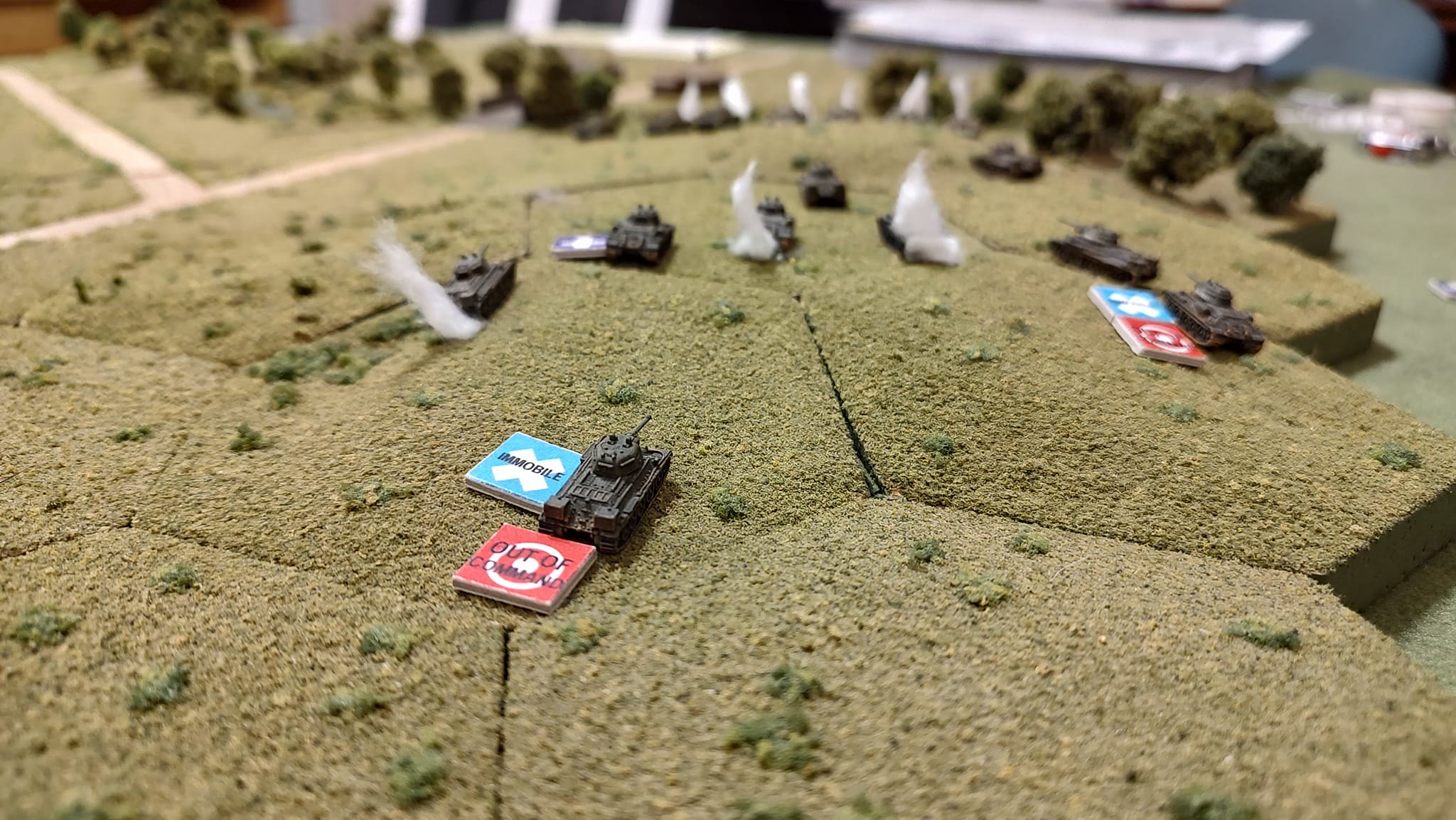 Russian 2nd Company making its assault on the German positions as seen from the Russian right. 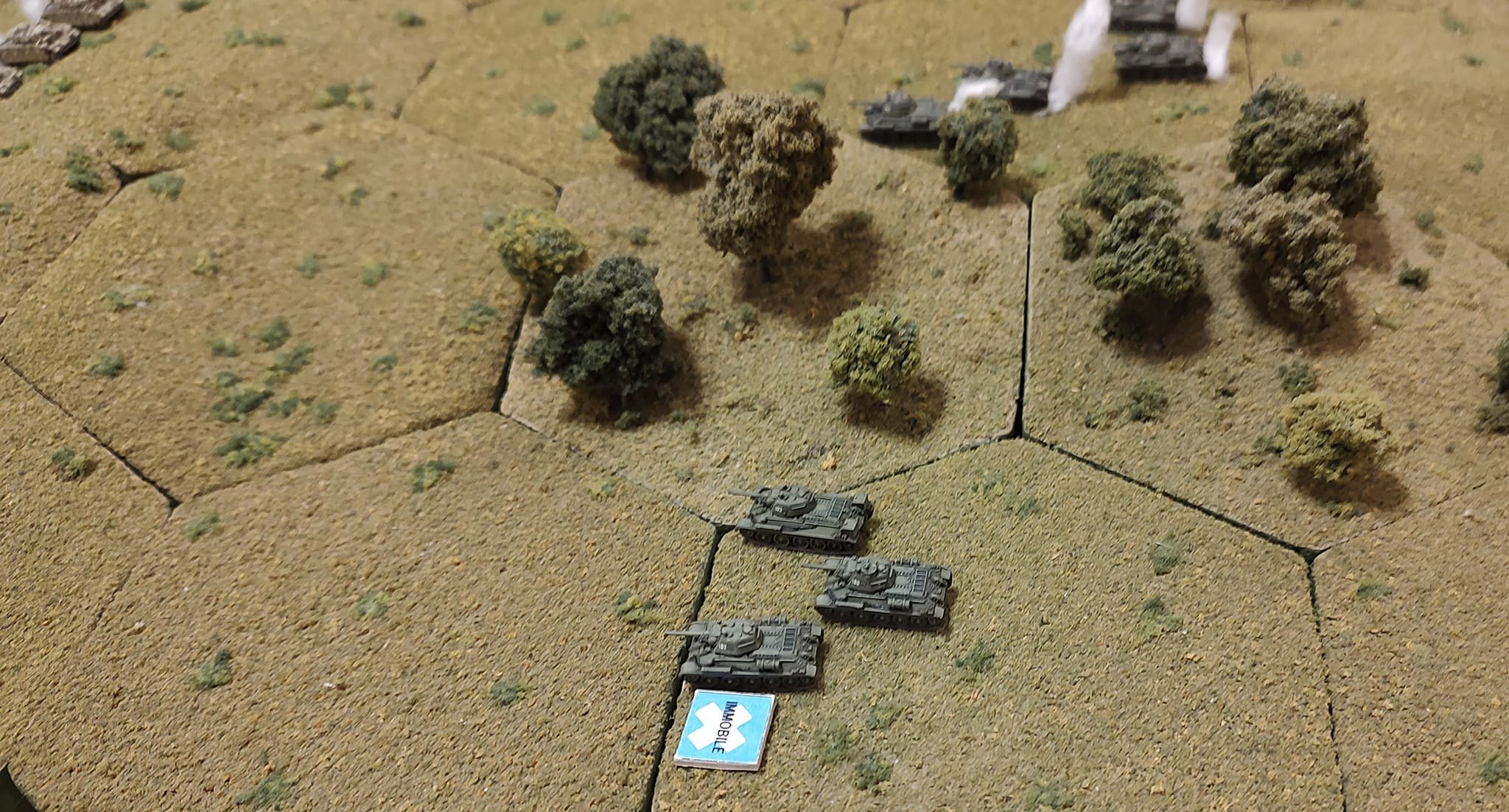 The Russian 1st Company on the Russian left. Its attack stalled when it lost 7 of its original 10 tanks but destroyed the German 1st Platoon leaving only the XO to cover the German right flank. 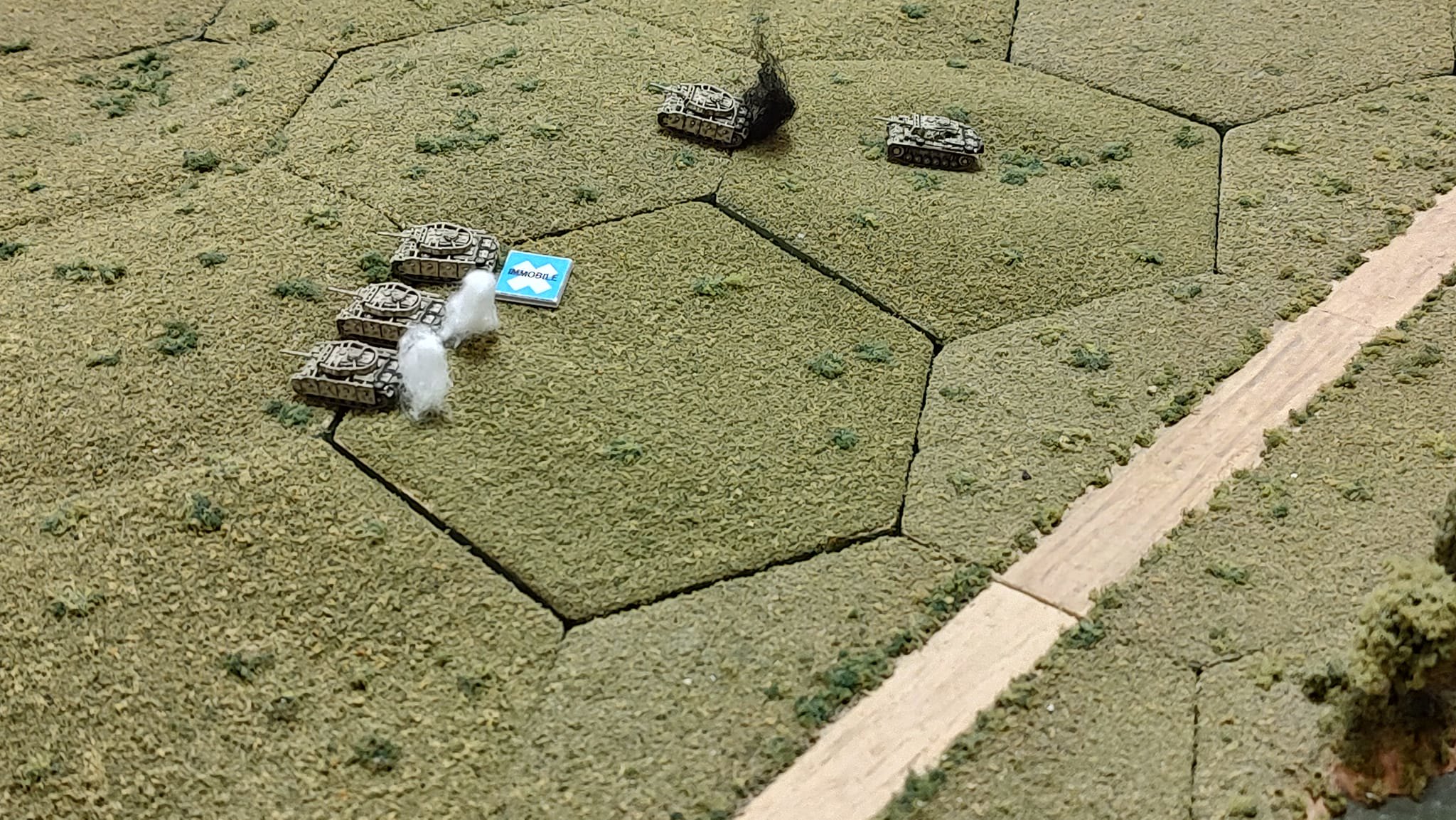 The German 1st Platoon was almost completely destroyed with 1 Panzer III brewed up, 2 knocked out, and 1 immobilized, leaving only the XOs Panzer III left. 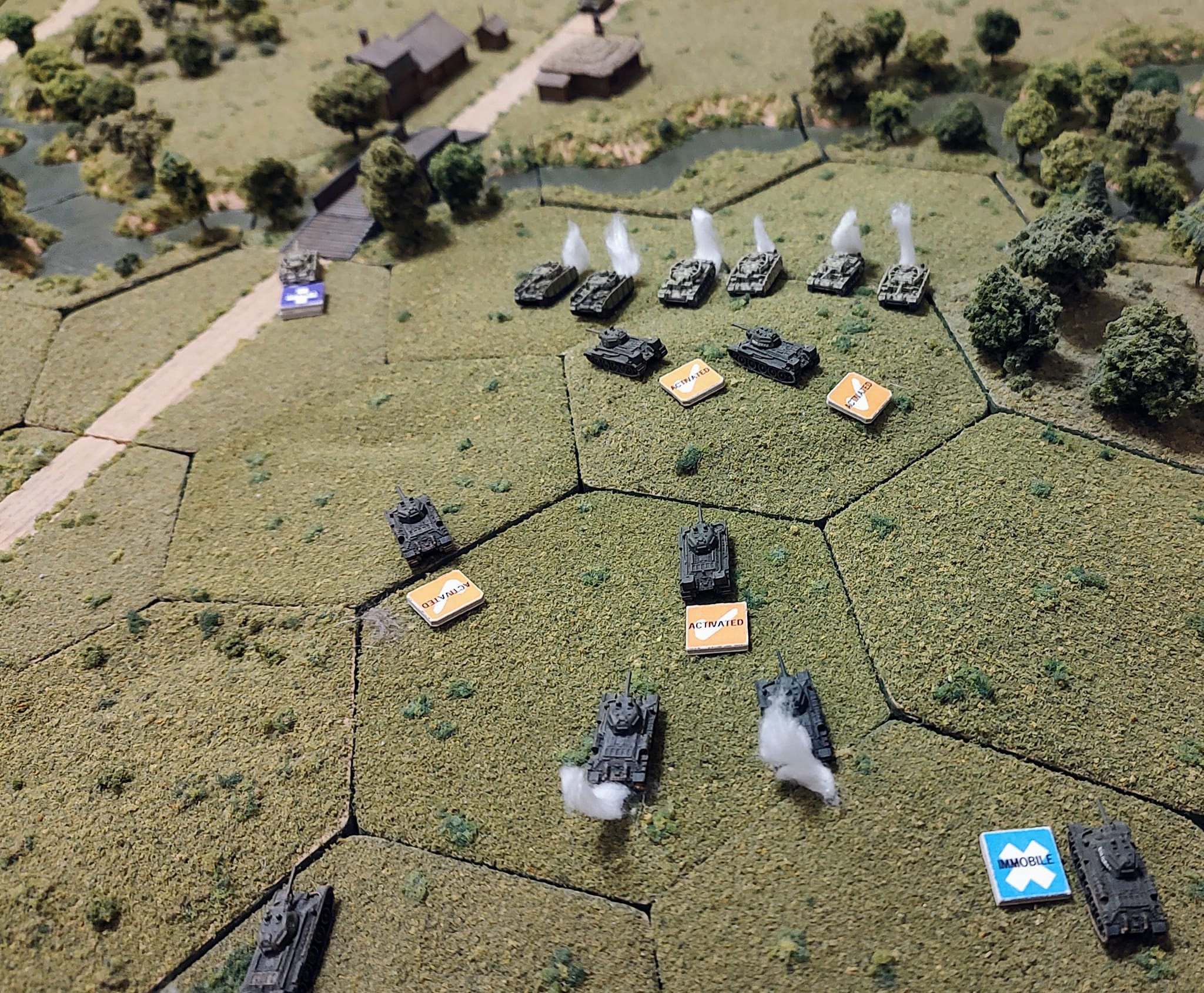 The Russians overrunning the German positions on their right. 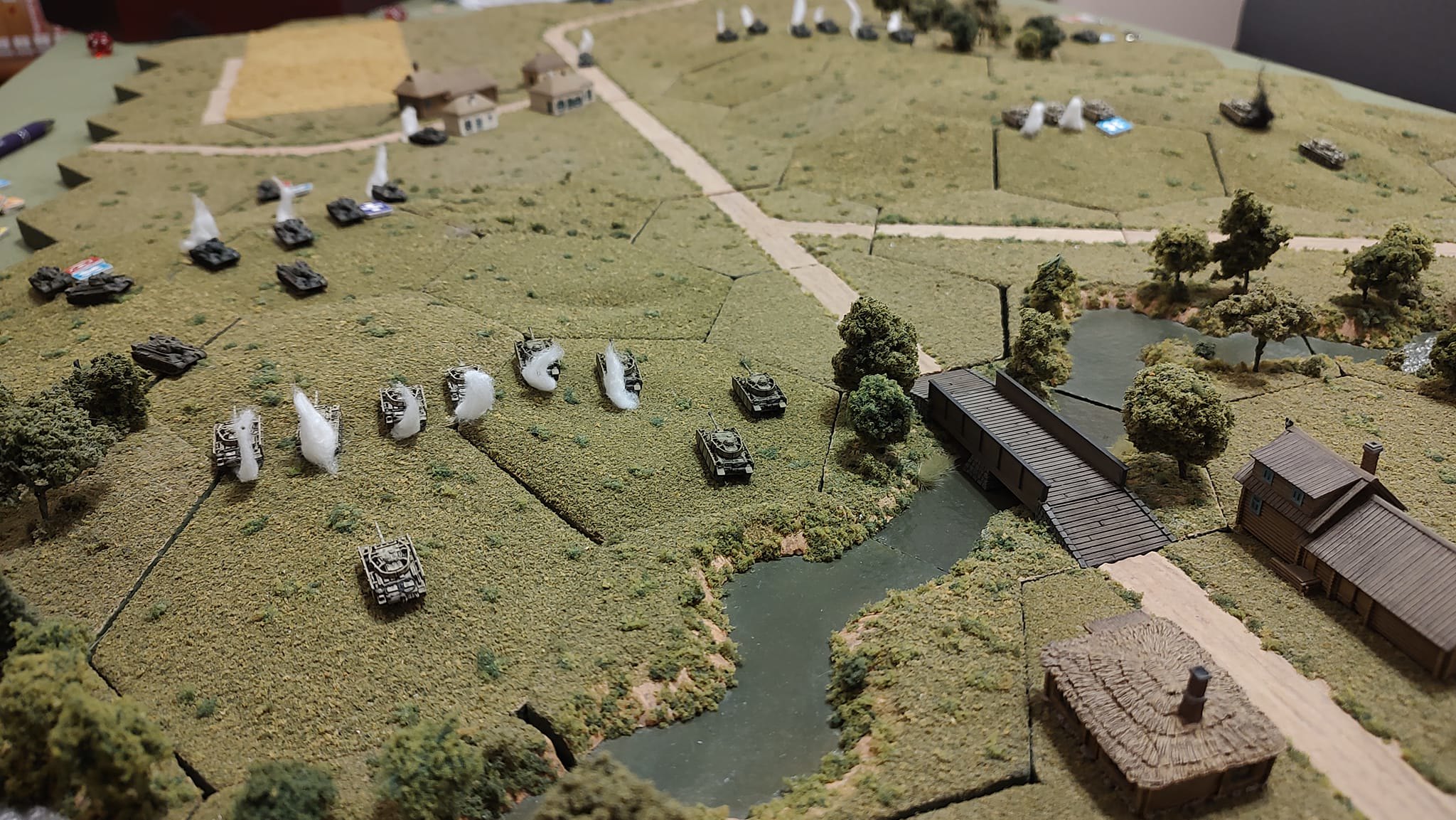 A view from the German side. Only 3 tanks, including the CO, remaining at this point.

It was a fun game using the Mein Panzer rules which I have been using for years. I also did a Tutorial featuring this game on the ODGW website in the Mein Panzer Forum under Core Rules if anyone is interested.
Top

Thank you very much, Burt! It was a fun game to do, especially after 4 years of not playing.
Top

Begemot
The summer grasses.
For many brave warriors
The aftermath of dreams.
--- Basho

Thank you both very much, Redleg and Begemot! I am getting the urge to run a game again soon. Now I have to decide a Theater of Operations and the forces involved. It might be time to roll out my American Shermans soon. They have not tasted battle ..... yet. Decisions, decisions.
Top

I just recently finished my 2nd T-34 M1943 Tank Company for my Russian Tank Brigade. This one seemed to take forever to complete and it didn't help that I had some issues with the Dullcoat hazing a bit when I was near completion. I managed to get things fixed but that took quite a bit of extra time. Overall I am happy with the result but learned some things for the future to hopefully make things faster and better.

I painted 12 tanks total with 10 for the 2nd Company and the other 2 for the Battalion and Brigade HQ tanks. To complete my Brigade for the Summer of 1943 time frame, I will need 10 more T-34s plus another 11 T-70s to complete my Light Tank Battalion.

The decals are by I-94 except for the larger 01 for the Brigade HQ tank which is by Microscale Industries from their 1/285th Russian decal sheet after cutting off the 3rd digit.

Here are a few pictures. 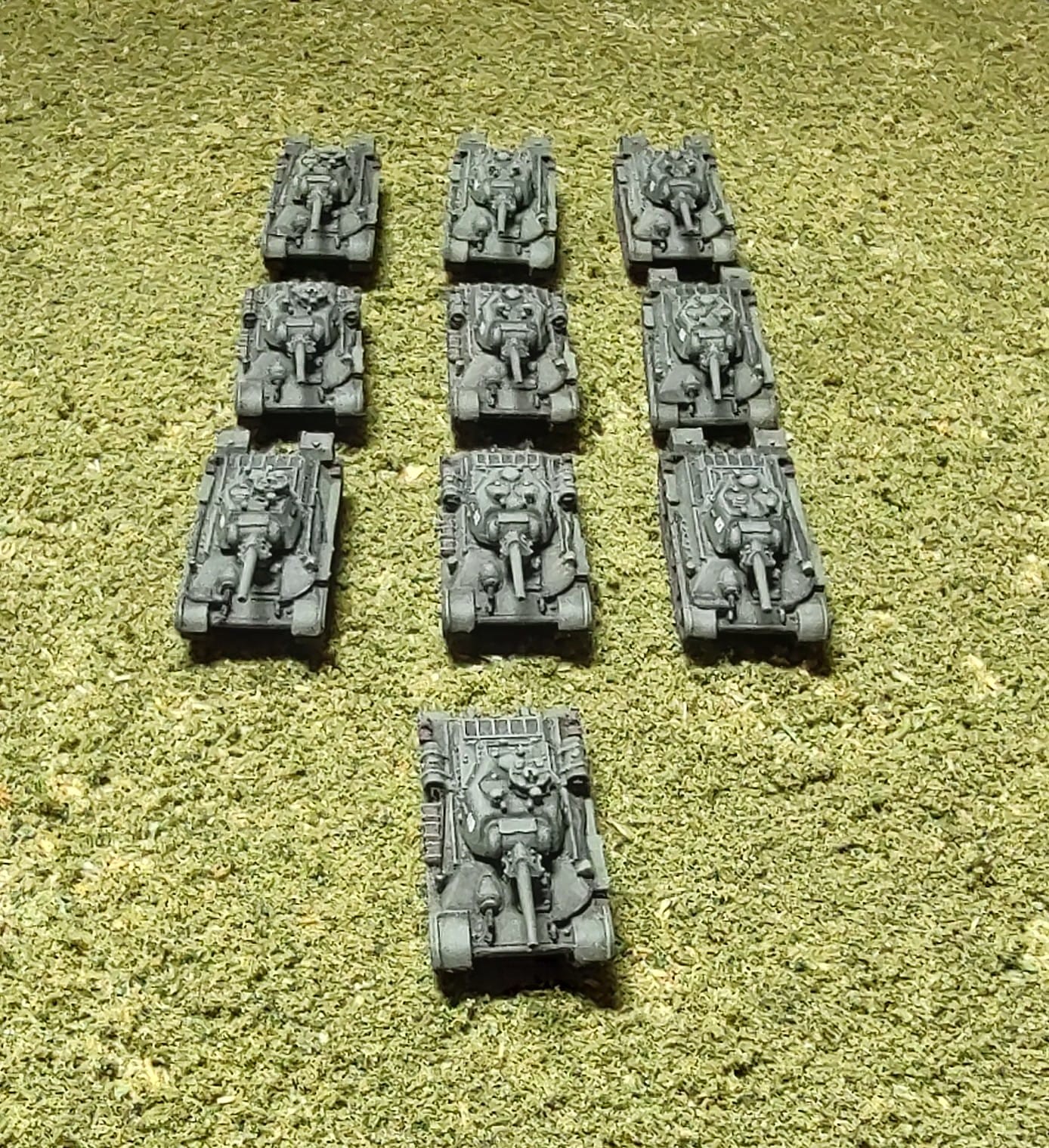 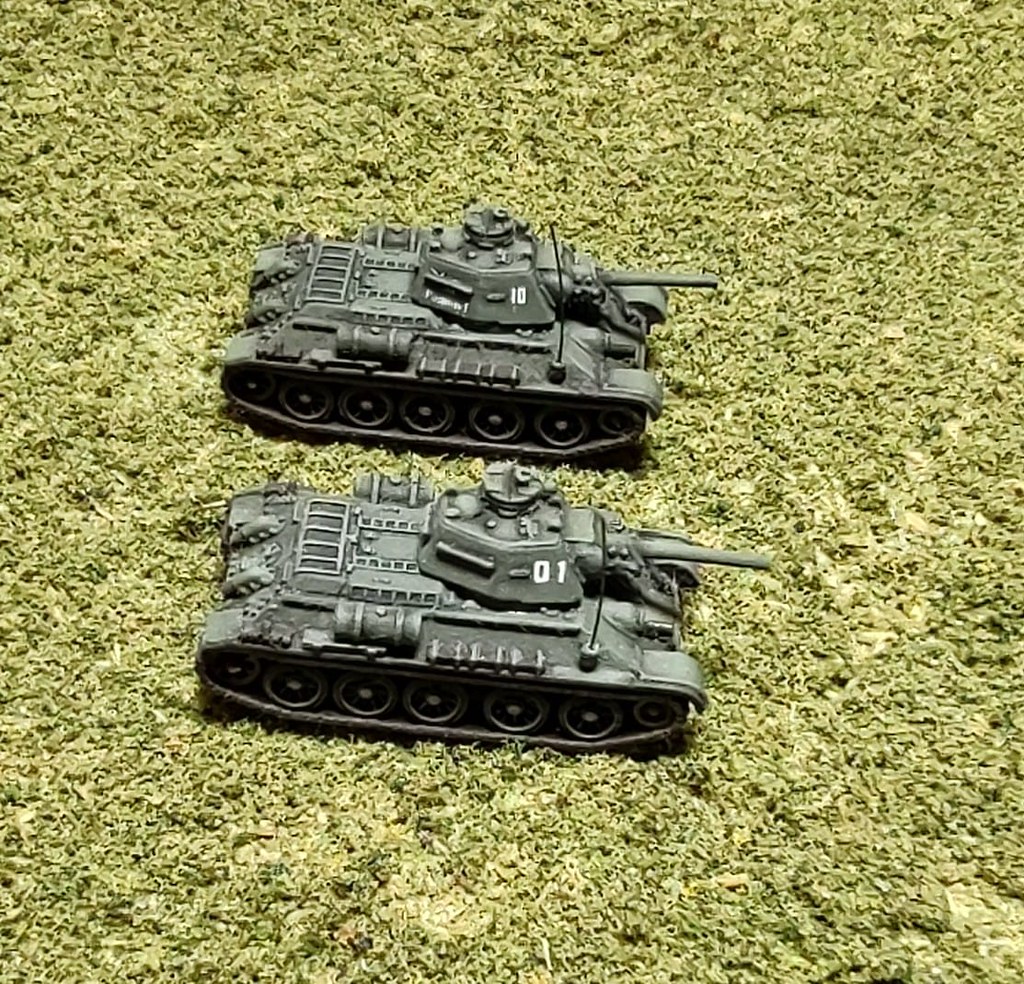 Those tanks are beautiful Pete! You're going to post pics of the full brigade when it's done right?
Redleg's Website: micropope.webstarts.com
Top

Thank you very much, Redleg! I will certainly post pictures of the entire brigade when I finish. I have another T-34 M1942 brigade that is complete for 1942.
That one has all the tanks except for a missing T-60. I have 20 of them for my Light Tank Battalion plus the 31 T-34s for the Medium Tank Battalion.
Top

Pete - Very nicely done T-34s. The details are brought out nicely with your shading and highlighting. Your photos are very good, too. You still have the touch.


Begemot
The summer grasses.
For many brave warriors
The aftermath of dreams.
--- Basho

Thank you very much, Begemot! I appreciate it very much.

Now I am figuring out what to do next. I had lunch with my friend Erik, today, and we were talking about our micro armor projects. After telling him what I have going on right now, either on the workbench or projected, he thought I should do some WWII Italians.

I am looking to do several smaller projects to get started on this venture. The first will be to do some M13/40s to get my Italian tank force for North Africa going. It will also give me the chance to try out those really cool Italian tactical markings I received from Dan at Flight Deck Decals. I used some of his German tactical numbers and crosses on my German half-tracks a few months ago and they worked great! 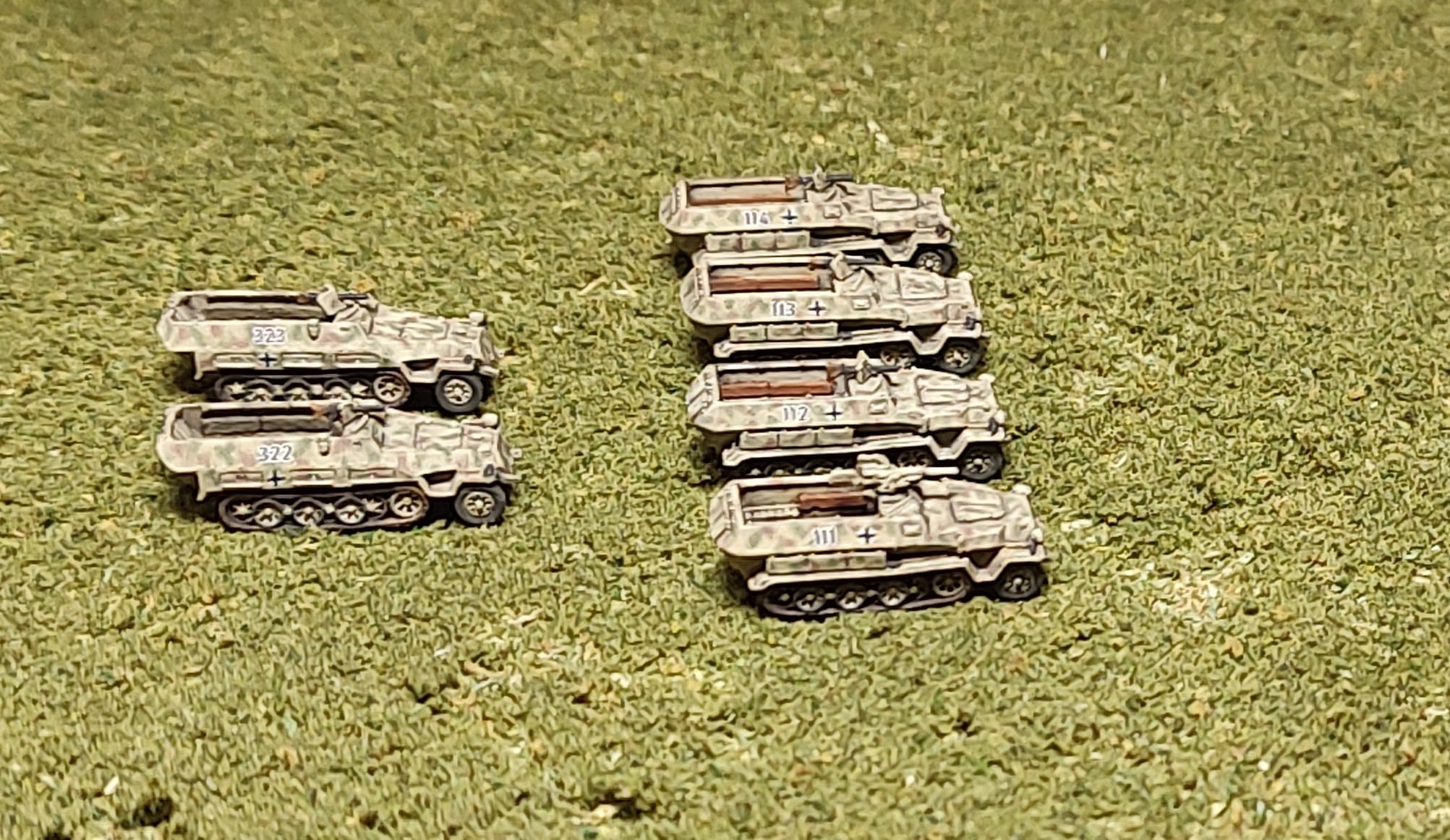 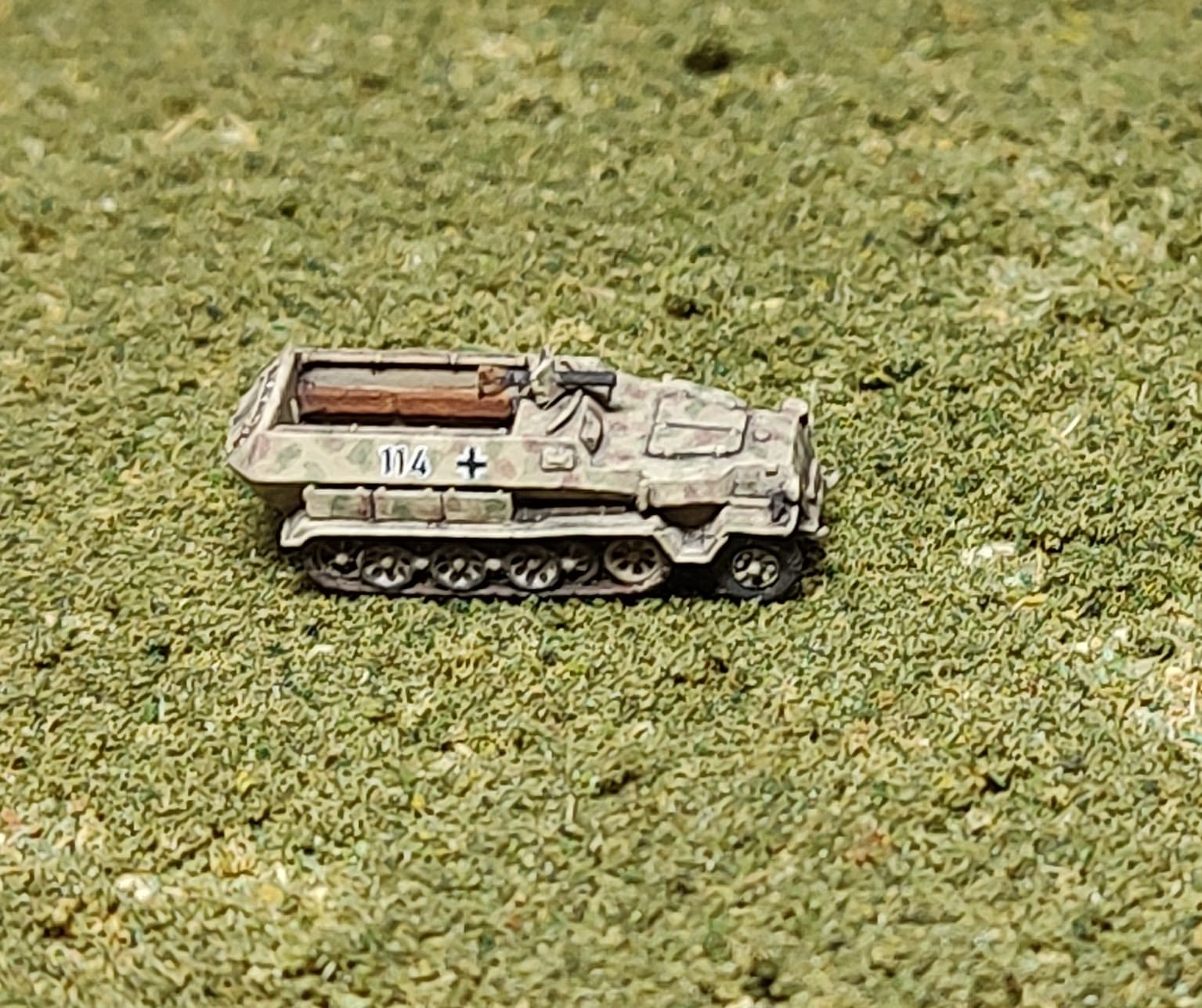 Great looking half-tracks Pete! I can't wait to see some Italians! So do you have an interest in Italians, or was it just the suggestion? Curious because I have TONS of suggestions for things I want to see painted to Pete-Level quality!
Redleg's Website: micropope.webstarts.com
Top
Post Reply
707 posts