I second that sentiment. The decals are very nice looking. And I appreciate the skill with which they are placed, and melded onto the models. It is a skill set I lack. As I understand it, it takes careful attention to ensure that the decal does not float just a bit off-angled from horizontal, and also some effort (and smarts with the application of various chemical brews) to set the decal without a visible film around it.

Pete is a past-master at this to my eye. Those decals are perfect. And they add so much to the models.

Thank you all very much, Redleg, Chris, Burt, and Mk1.

I have done quite a few vehicles with decals over the years and to be honest they can be a bit fiddly at times. Somehow my OCD seems to overcome these little problems and I soldier on through.

The Marine Corps M4A2 "Stars and Bars" as on this model was actually constructed from a U.S. star, probably by Microscale, and then I added the bars on either side. I don't remember what I used for the bars but some spare decal material off of a decal sheet. It may even be a number 1 cut down a bit and put on in the horizontal position rather than vertical. I don't specifically recall if the tactical number was just the last 2 digits cut off of a white German 3 digit tactical number or if I used 2 separate numbers and just carefully put them together.

On the Russian tank, the slogan is from Microscale Industries 1/285th scale Russian decal sheet while the tactical number might be I-94. I have had to get creative on some vehicles and aircraft in order to spruce them up a bit.

Here are a couple German Tiger Is as part of 501st Heavy Tank in Tunisia 1942-43 before the numbers were changed. 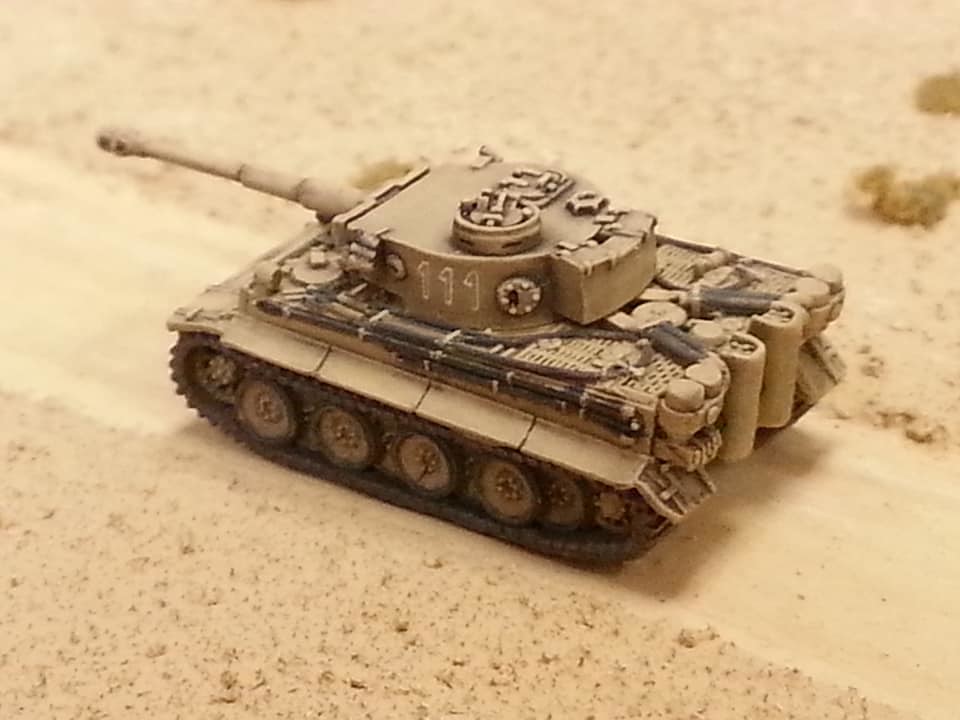 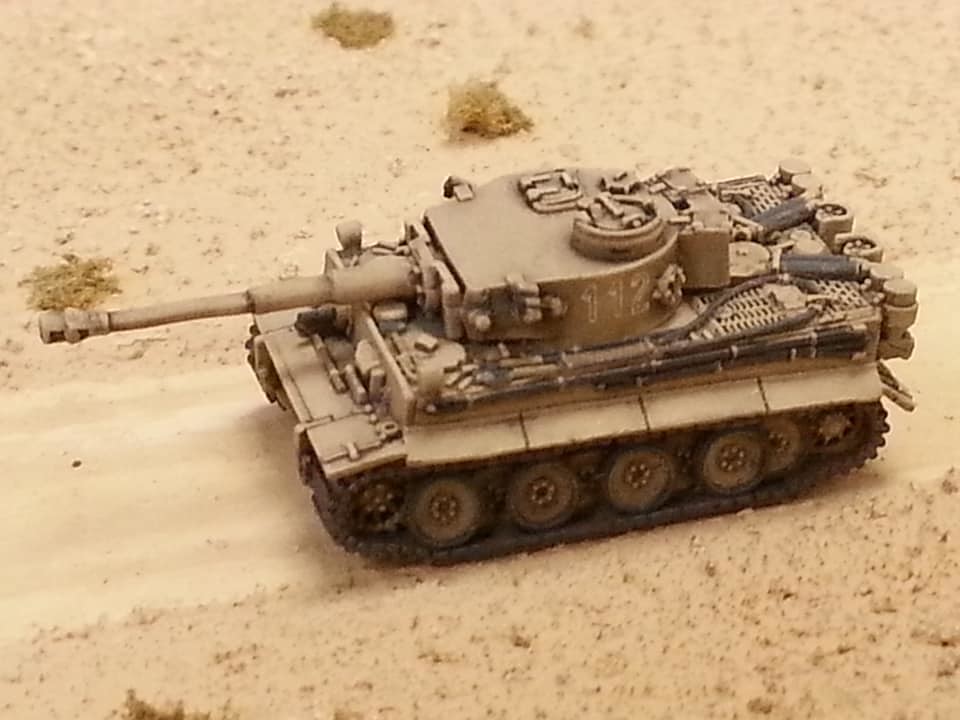 The decals are by Microscale Industries off of their 1/285th scale German decal sheet. They happen to be a bit oversize but actually correct for these particular Tigers. The 501st used a white outline large style and these are perfect for that. The downside is that the numbers were not in any logical numerical sequence but basically made up in their sequencing so are basically gibberish. I had to carefully cut and paste these to get the numbers I needed.
Top

I respect the patience you had to have with those decals. I just don’t have it in me and I don’t like my results - so I skip it. Tigers look very good, the detail work is impressive. Ever do an early Tiger 1 from Russian front where I think the color scheme was a green/grey?
Top

Thanks very much, Burt! I know putting decals on can be a pain sometimes.
Top

Thank you very much, Redleg!
Top

Here are a couple more pictures of vehicles I have painted for GHQ.

1. M3A3 Stuart. I definitely did some cutting and pasting on the fender decals on this one. The yellow diamond is from I-94 Enterprises. 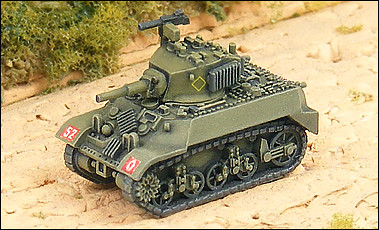 Pete - These last two models are particularly fine efforts. I especially like the Stuart. Quite superb. And a fine bit of photography by the GHQ house photographer as well.


Begemot
The summer grasses.
All that remains
Of warriors' dreams.
--- Basho
Top

Thanks very much, Begemot! Nicki at GHQ does a great job with the photography to be sure.
Top

Fantastic work Pete! You are the micro maestro!
Time on the recce is time well spent!
Top

Thank you so much, Redleg!
Top

Wow - in my book that Stuart is neck and neck with your SM79. Really excellent looking.

Have you ever painted the Karl Morser battery?
Top

Thank you very much, Burt! I really appreciate it. I did spend a fair amount of time on the M3A3 Stuart for GHQ. This was primarily in creating and adding the decals to the fenders that were prominent on many British vehicles.

I have the Karl Morser battery from GHQ which I bought a long time ago on a visit to GHQ. It is still in the original "old style" Combat Command box that GHQ used to have. I have not painted it because I am not really sure what to do with it. It is a very cool set representing a pair of heavy seige guns but I am not sure how to use it in a scenario. I have so much other stuff on the painting table right now that this is definitely on the back burner. If I did paint it, I would probably paint it in the overall dark gray scheme rather than the camo scheme.

Do you have this one, Burt?
Top

Yep, I have the battery, I got it half price off of eBay a while back. I went as far as prepping and gluing railings etc on. Then I had a workbench “mishap” - dang cat jumped up and knocked over a ton of works in progress. Half the rails came off… Like you, not sure how to use in a scenario, I still want to throttle the cat, and not wanting to mess with railings again, I therefore have quietly put them to the back back back burner. Figured your painting of them might inspire some movement on my part haha!
Top
Post Reply
563 posts