Thank you very much, reggia-marina!

I'm glad you enjoyed the Mein Panzer rules. Mk1 who is a contributor here also plays these rules as well.

I was introduced to the Mein Panzer rules at Historicon in 1998 and played a sample game with my friend, Begemot. Mein Panzer hits the sweet spot for me with a playable game that has a lot of detail as well. I like the fact that the die rolls in the game are based on troop quality and that each country has its own troop quality table.

I think that overall, the ratings for the various vehicles are fair. In my particular game, the German Veteran Troop Quality was offset by the Russian T-34s being better tanks than the Panzer IIIs that the Germans were using. The T-34 M1943 is able to go toe to toe with the Panzer IV with the Panzer IV having a better main gun while the T-34 has the advantage in speed and a slight advantage in overall armor protection.

Thanks for sharing not only the pics of the game, but the game details and mechanics as well. My introduction to micro scale gaming was with Mein Panzer rules and they were pretty awesome! It also helped that the gaming group was super patient and helped me learn the game - not sure if you are on here Sacha, but if you are - you are the man!)

You are the wargame maestro Pete!
Redleg's Website: micropope.webstarts.com
Top

Thanks very much, Redleg! I do think the Mein Panzer rules are really good for the scale they are set at which is 1 vehicle model = 1 vehicle and 1 infantry stand = squad/team. These rules are now over 20 years old and remember playing them for the first time at Historicon in 1998 with Begemot who also attended.
Top

Here are some pictures from Turn 3 of the game. Both sides have been trading a few shots. The Germans have consolidated on the reverse slopes of the 2 hills. The Germans have managed to knock out a few T-34s but have suffered an unusual number of misfires which will take a turn to clear. 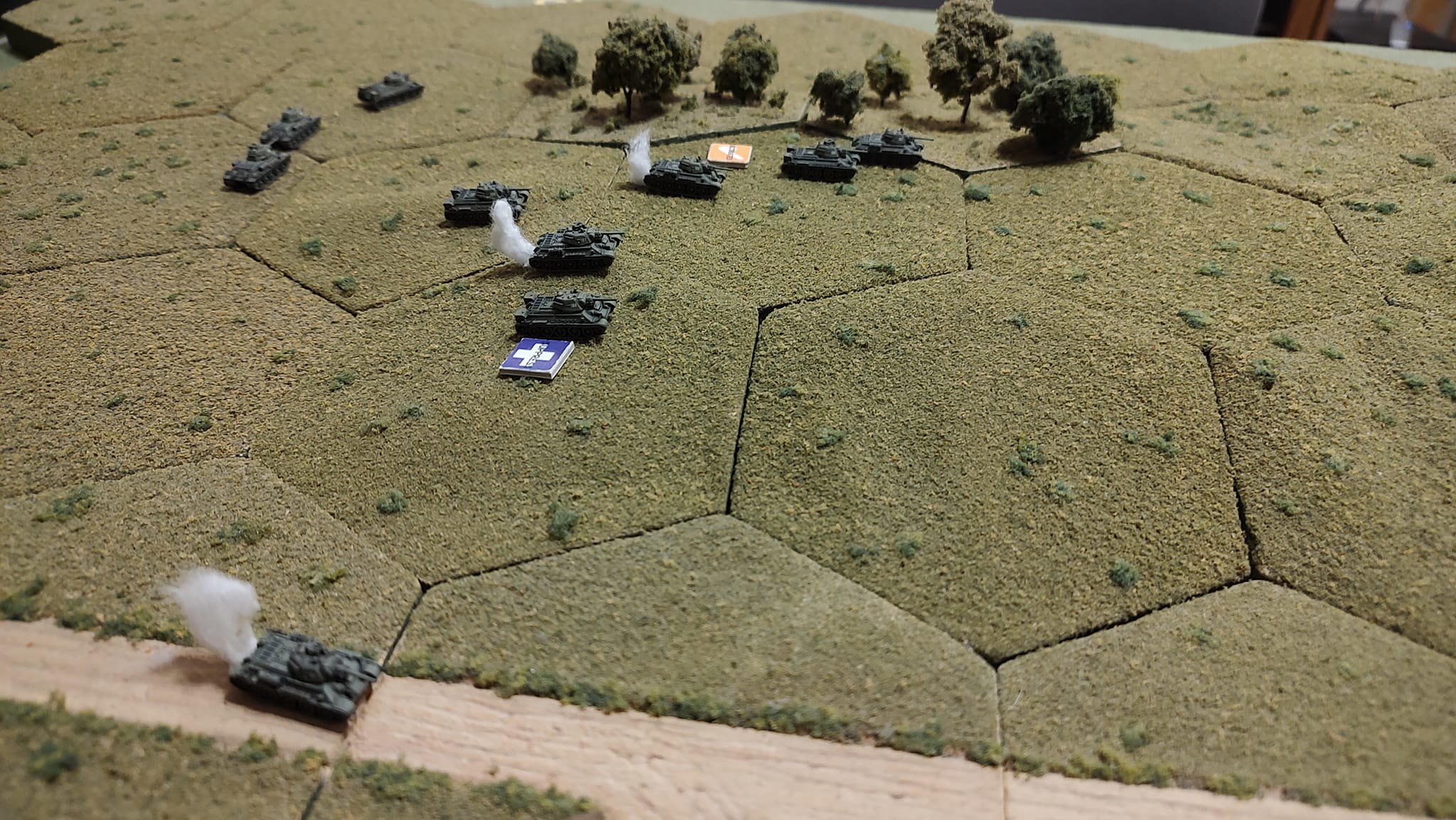 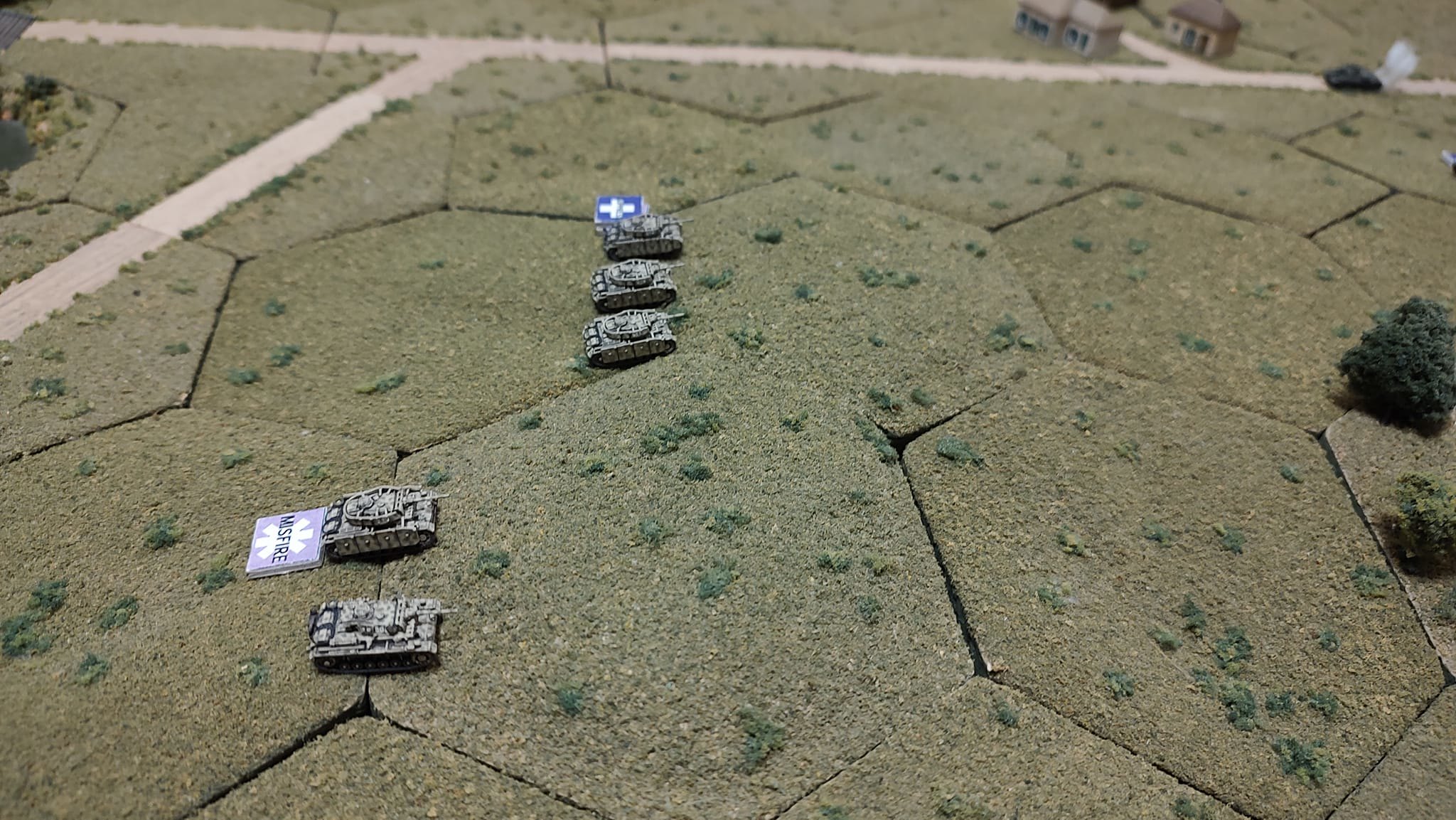 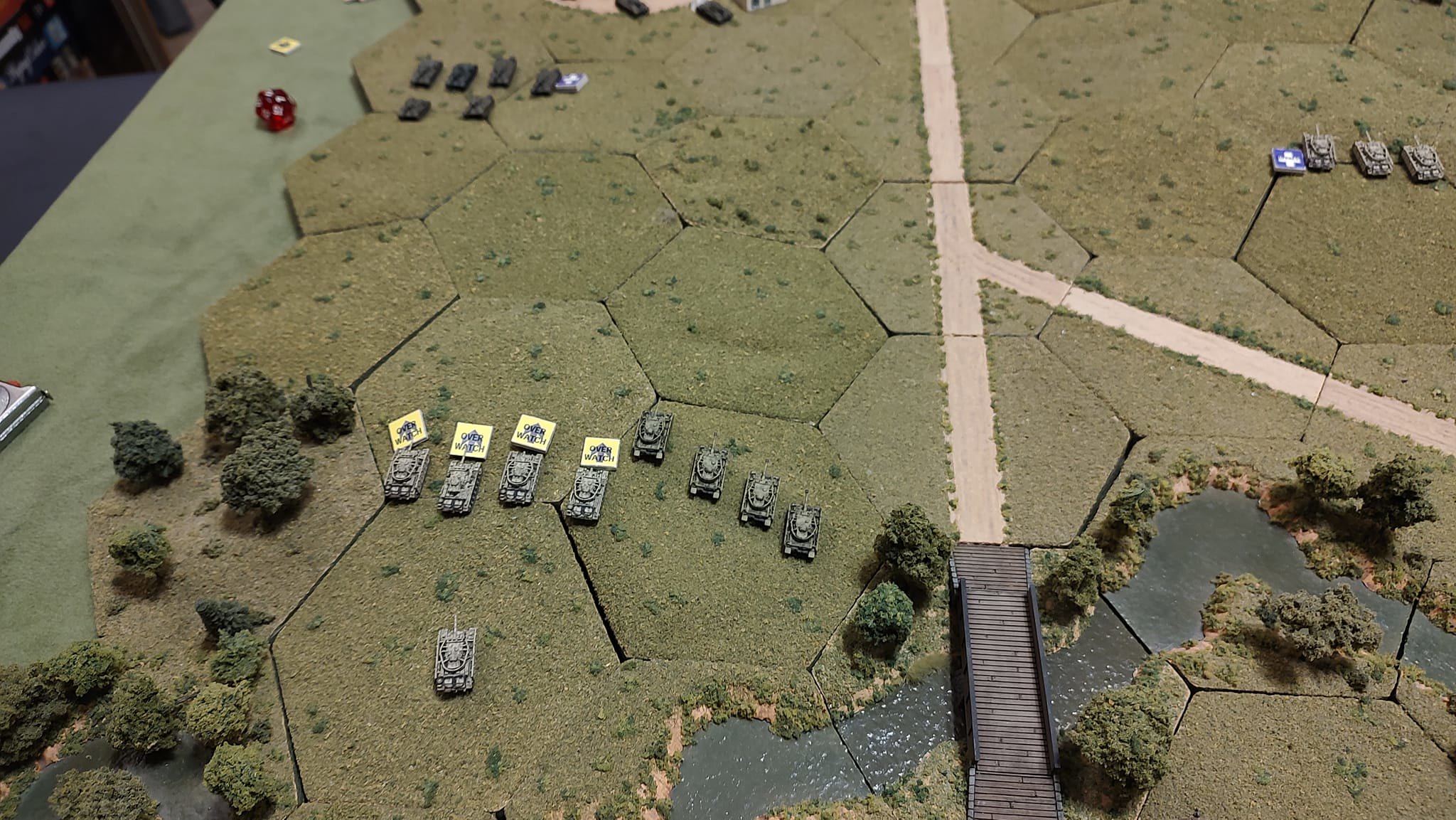 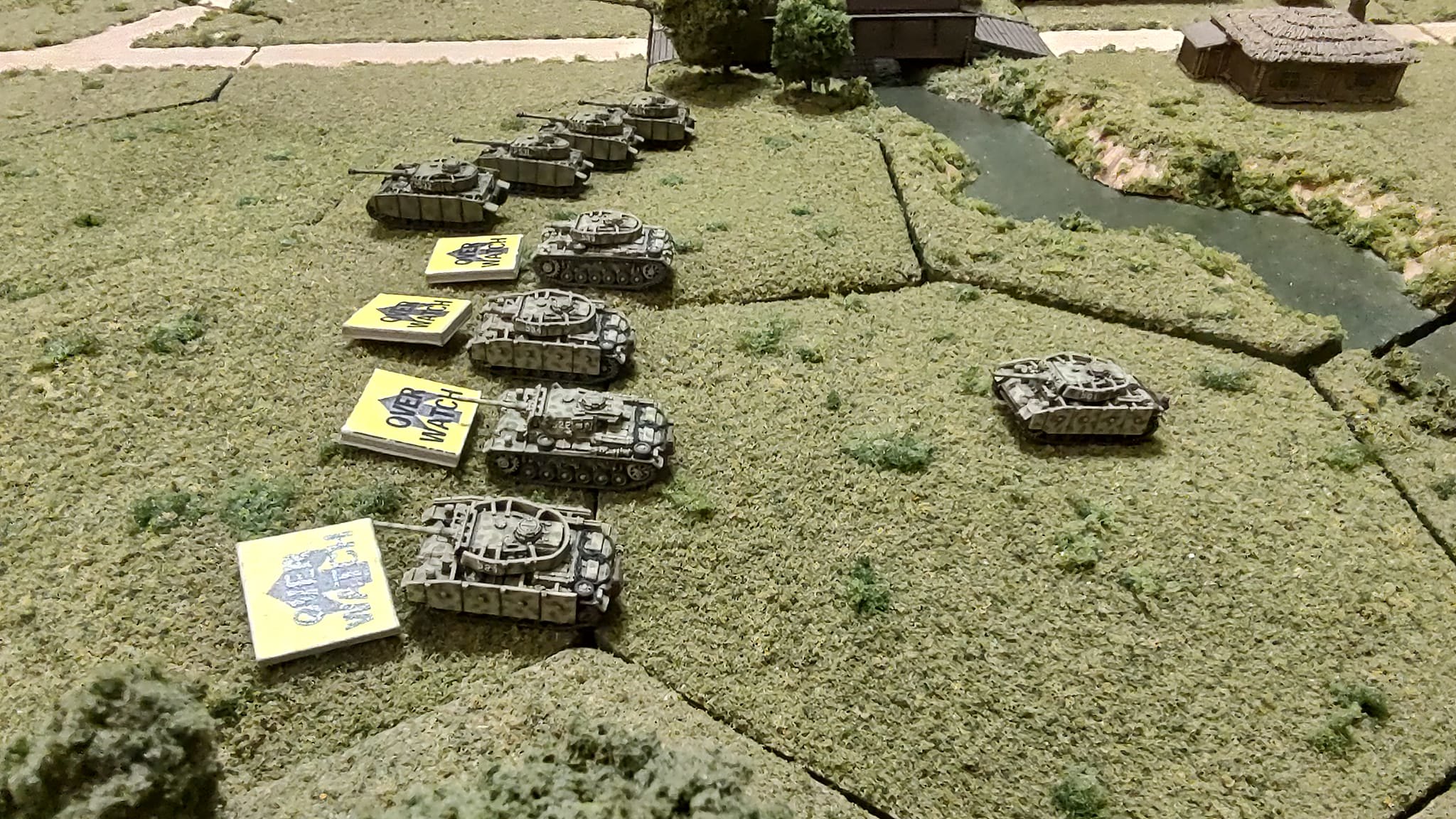 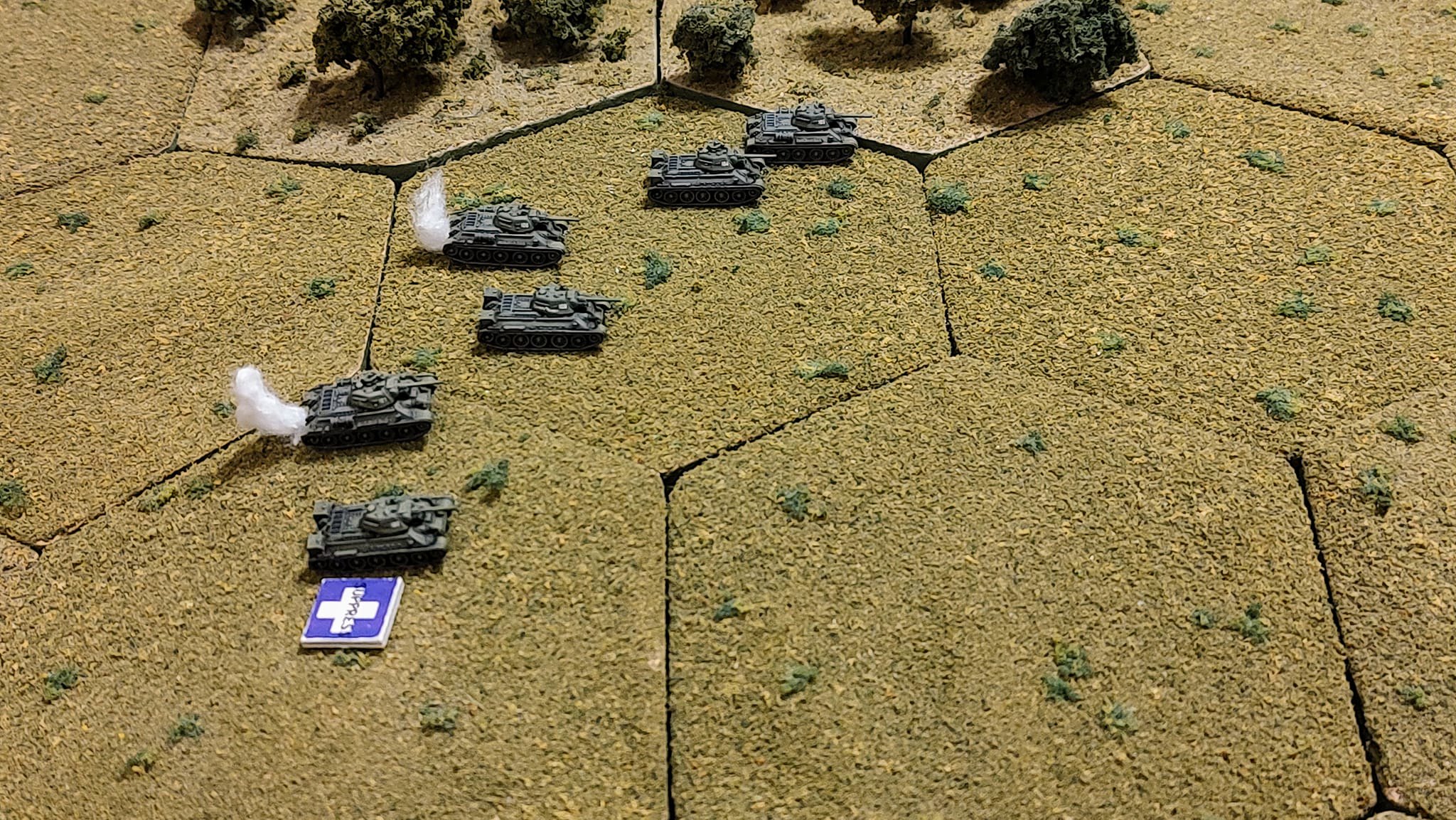 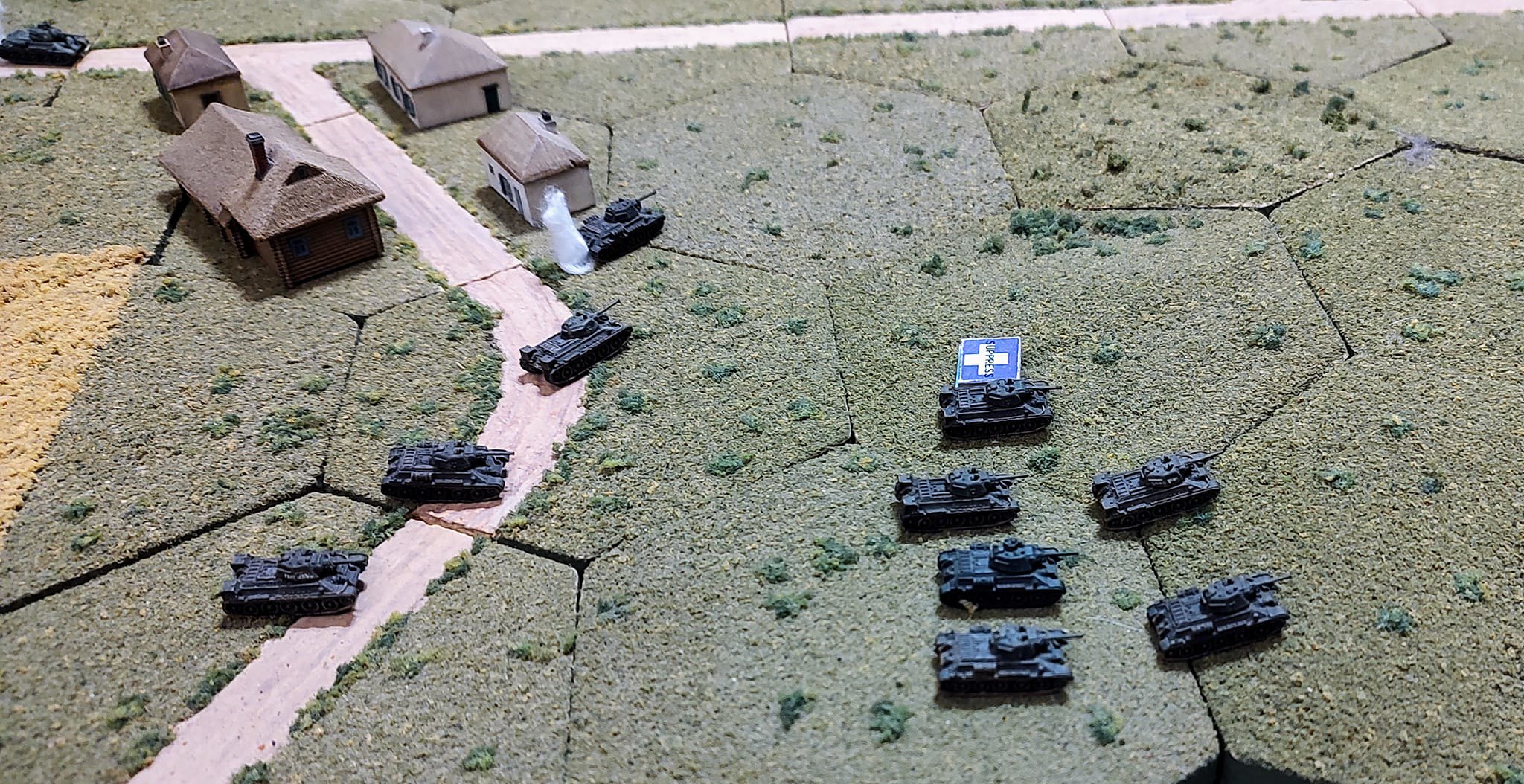 Thanks very much, Bill! It was fun doing it. I may try to do another one soon.
Top

I agree - this is fantastic! We need more!
Redleg's Website: micropope.webstarts.com
Top

Thanks very much, Redleg! Here are some more game pictures from Turn 4.

Turn 4 of my solo game of Mein Panzer was pretty big. The Russians succeeded in knocking out 3 Panzer IIIs from 1st Platoon including 1 catastrophic kill.
On the German left, one of the Panzer IIINs from 2nd Platoon suffered a major misfire and the crew bailed out.

The Russian 1st Company will have to roll next turn to see if they continue the assault, hold fast, start to do an orderly withdrawal or even rout off the map.
We shall see. 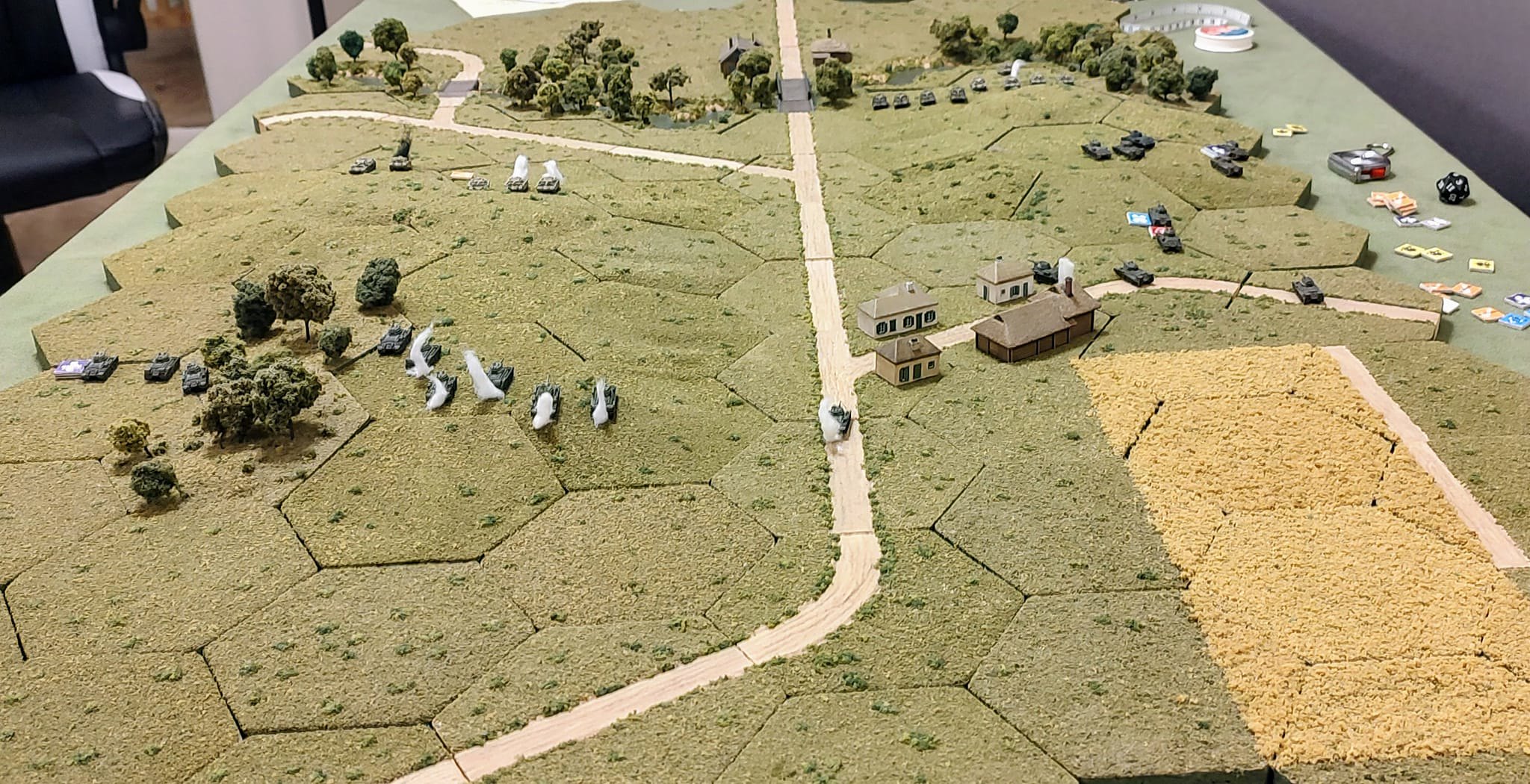 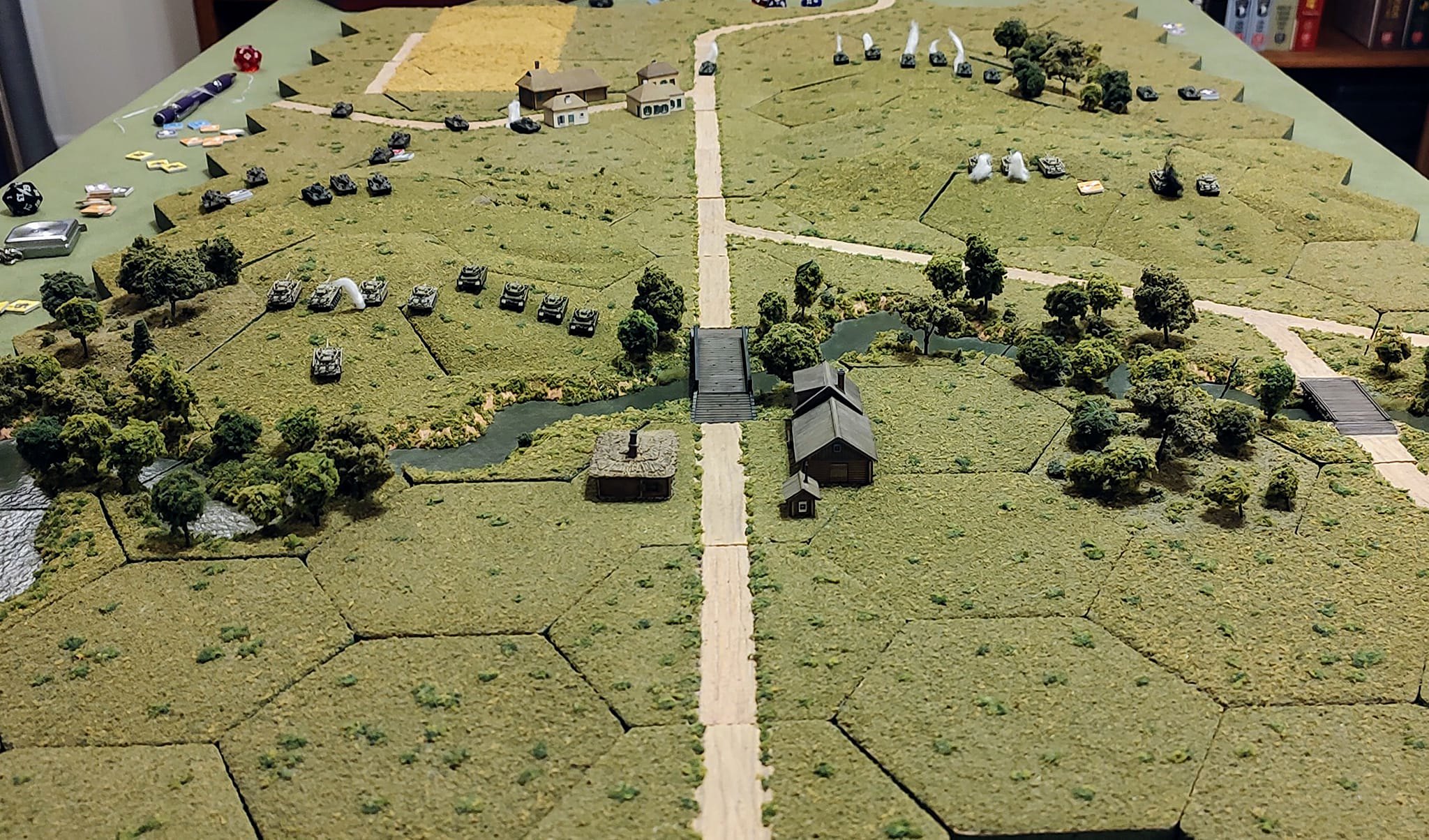 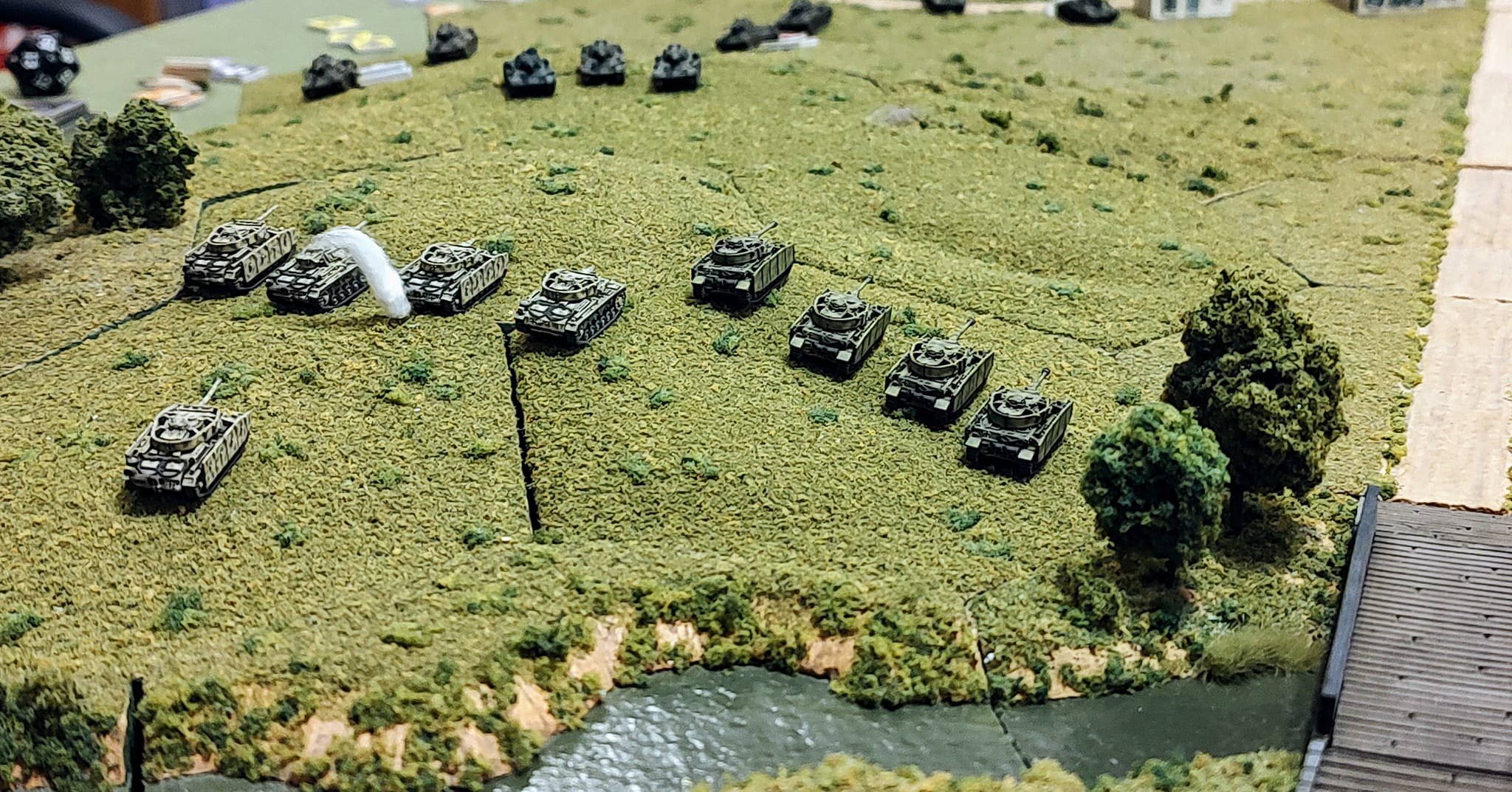 The view from the German left with 2nd and 3rd Platoons awaiting the Russian onslaught. 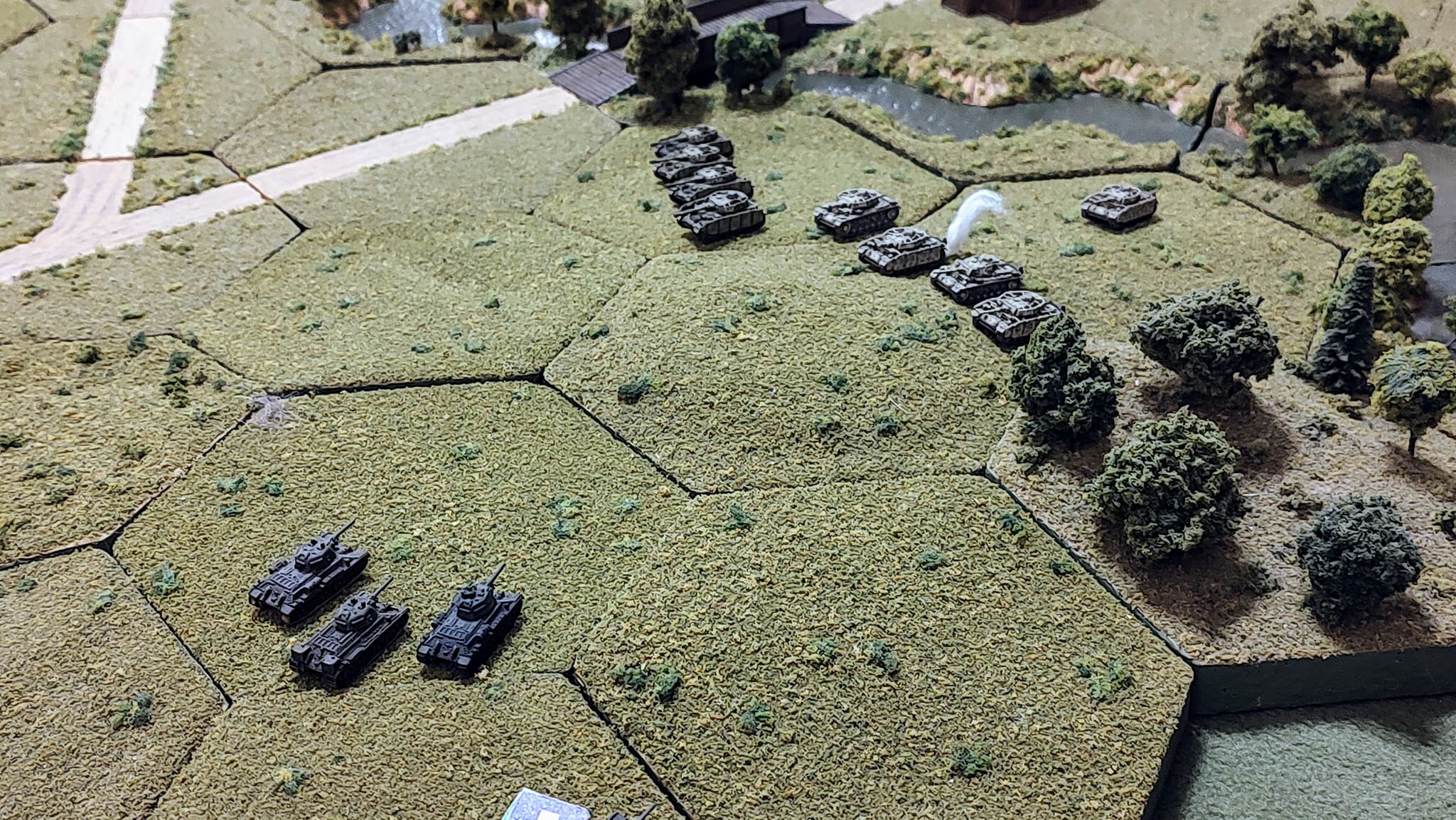 One Russian platoon from 2nd company crests the hill. Getting into close range. 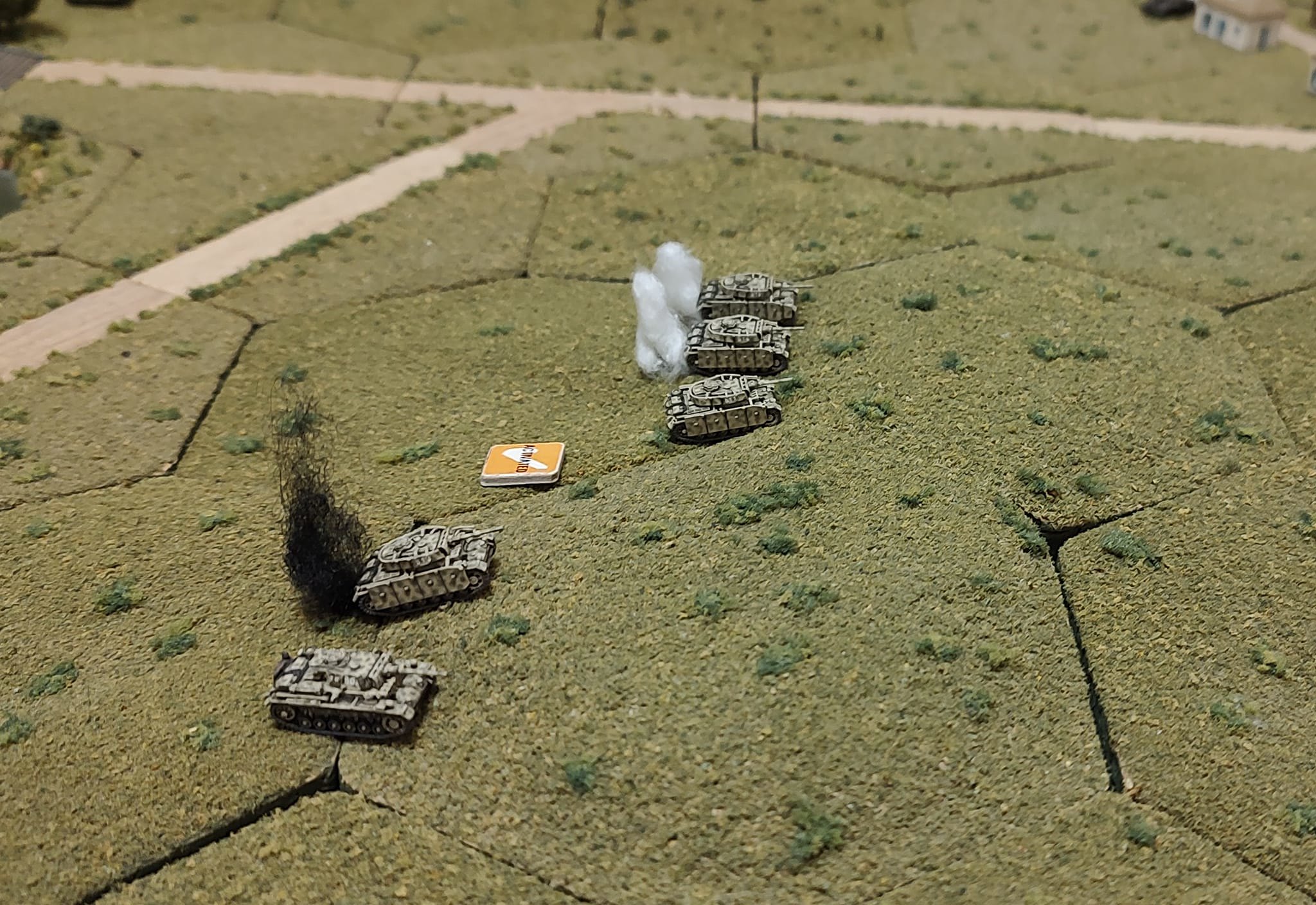 Close-up view of 1st Platoon after 3 Panzer IIIs knocked out. 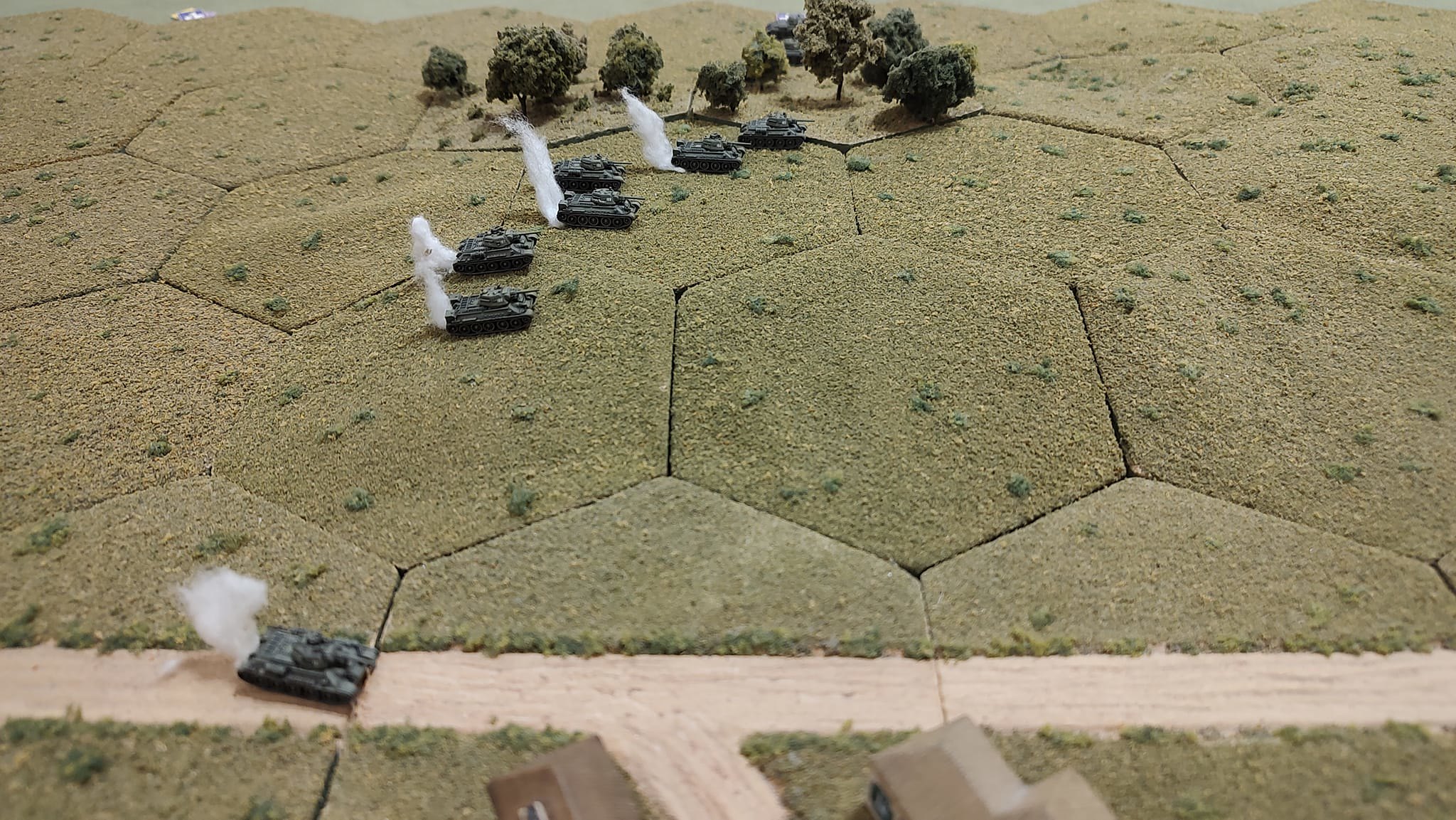 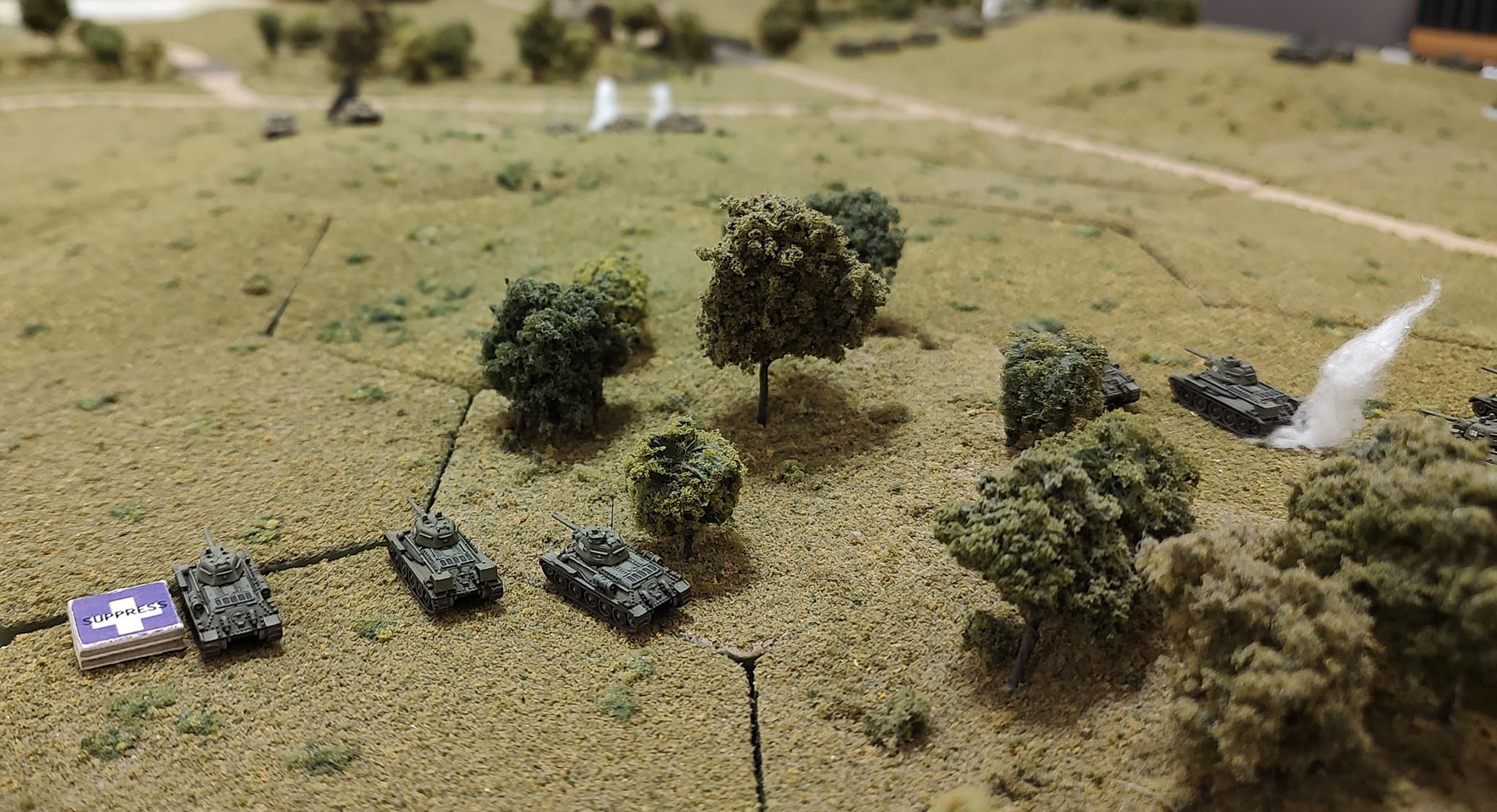 The 2 remaining tanks of 1st Platoon and the CO of 1st Company attempt to outflank the German positions. One of the tanks is immobilized but the Germans have suffered losses of 3 out of 5 tanks on this side.

As others have commented: great terrain and models and a good exposition of the Mein Panzer rules. Well done. Looking forward to the rest of the AAR.

Tactical note: It is a good thing for the German left platoons that the Soviets have been pretty well shot up on their front. With their backs to the river, getting out of the bag if things had gone against them would have been interesting.


Begemot
The summer grasses.
For many brave warriors
The aftermath of dreams.
--- Basho

Thank you very much, Redleg and Begemot! I will be doing Turn 5 here very soon. Stay tuned!
Top

Here is Turn 5 of my solo game of Mein Panzer. The Russians got lucky and seized the initiative.

The Russians get the lower roll and the initiative for Turn 5.

The Russians have to do a morale check for 1st Company as they hit their morale threshold on Turn 4. They continue to soldier on even though about 2/3rds of the company's T-34s have been knocked out.

The Russians needed a 9 or less on the die and got a 7.

The 2nd Company on the right is doing better and starting to rush the German defenders on that hill. The gunnery duels are now at close range as the Germans in their inferior Panzer IIIs, backed up by the Panzer IV Platoon, attempt to stem the Red Tide.

The Russians moving on the hill.

2nd Company takes some casualties but presses on.

In the ensuing exchange, the Germans lose 2 of 4 of their precious Panzer IVs while 2nd Platoons Panzer IIIs have now lost 2 vehicles as well. 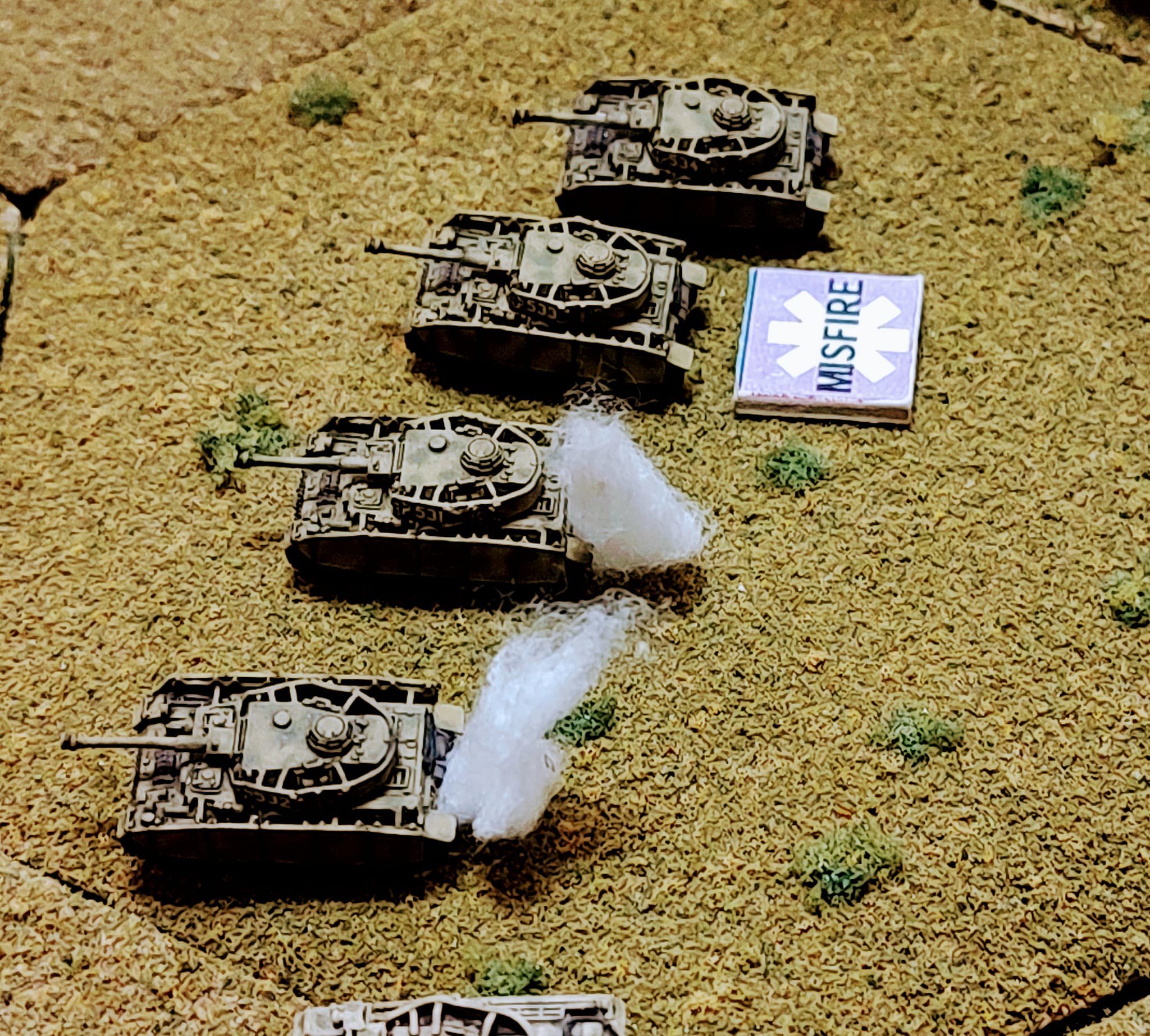 The 2 knocked out Panzer IVs plus one that had a misfire that needs to be cleared. 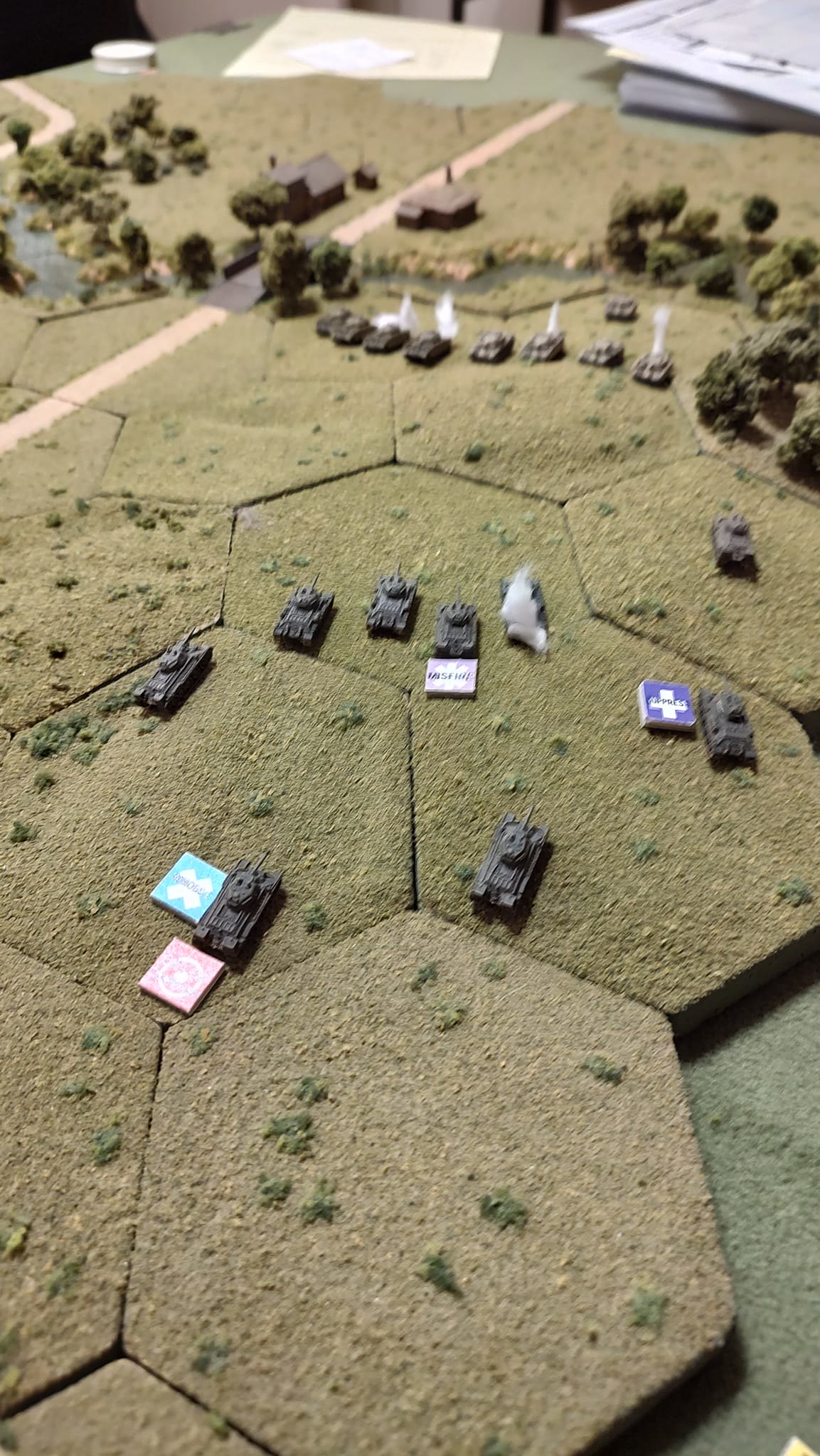 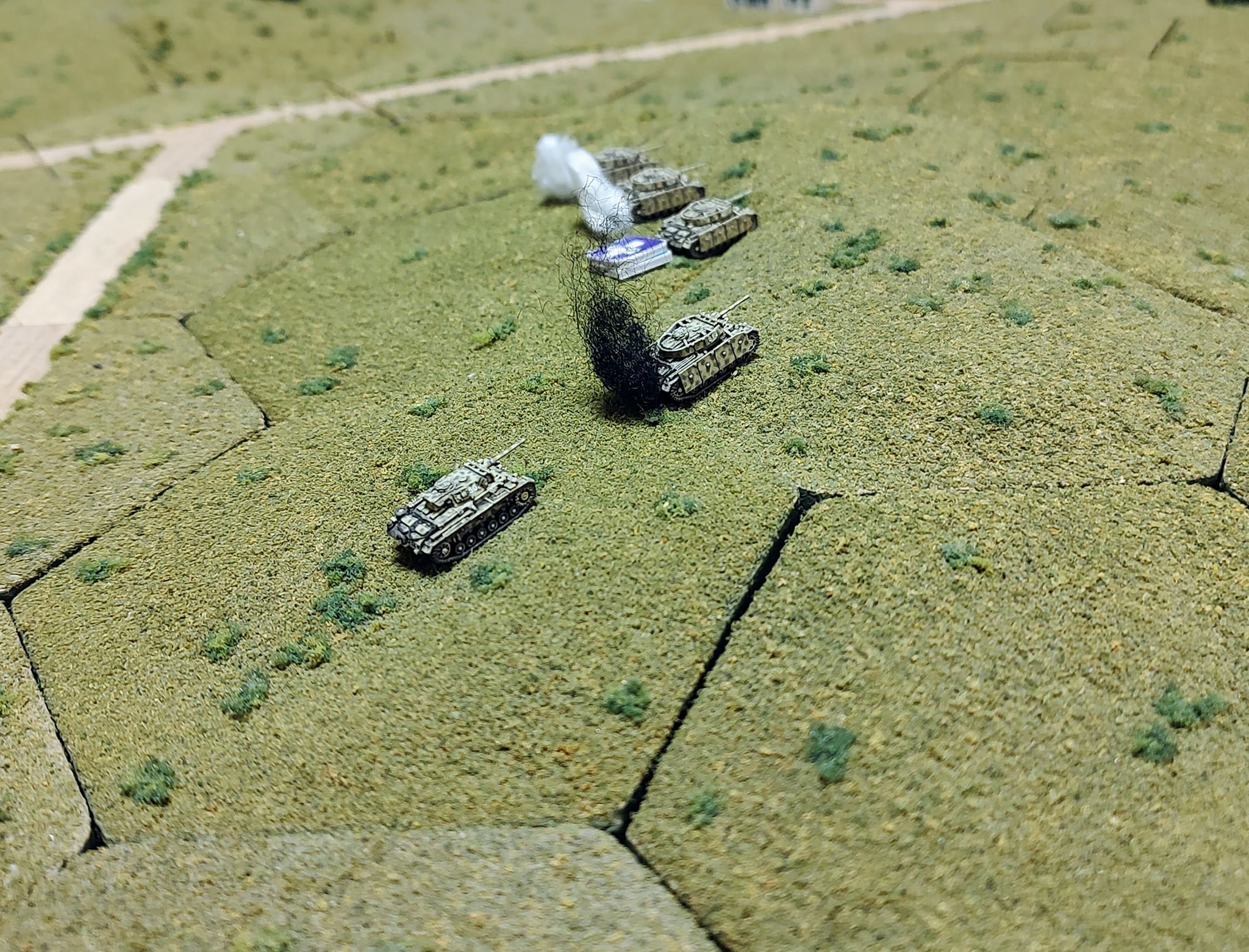 Meanwhile, on the German right flank, things are more quiet as the Russians are running out of steam. The losses on both sides have been heavy with 7 1st Company T-34s knocked out now and the Germans have 3 losses to 1st platoon including one "brewed up" and the 4th tanks is now immobilized. Only the XO tank is intact.

The Russians do try to knock out the XO's tank but fail to score a hit. 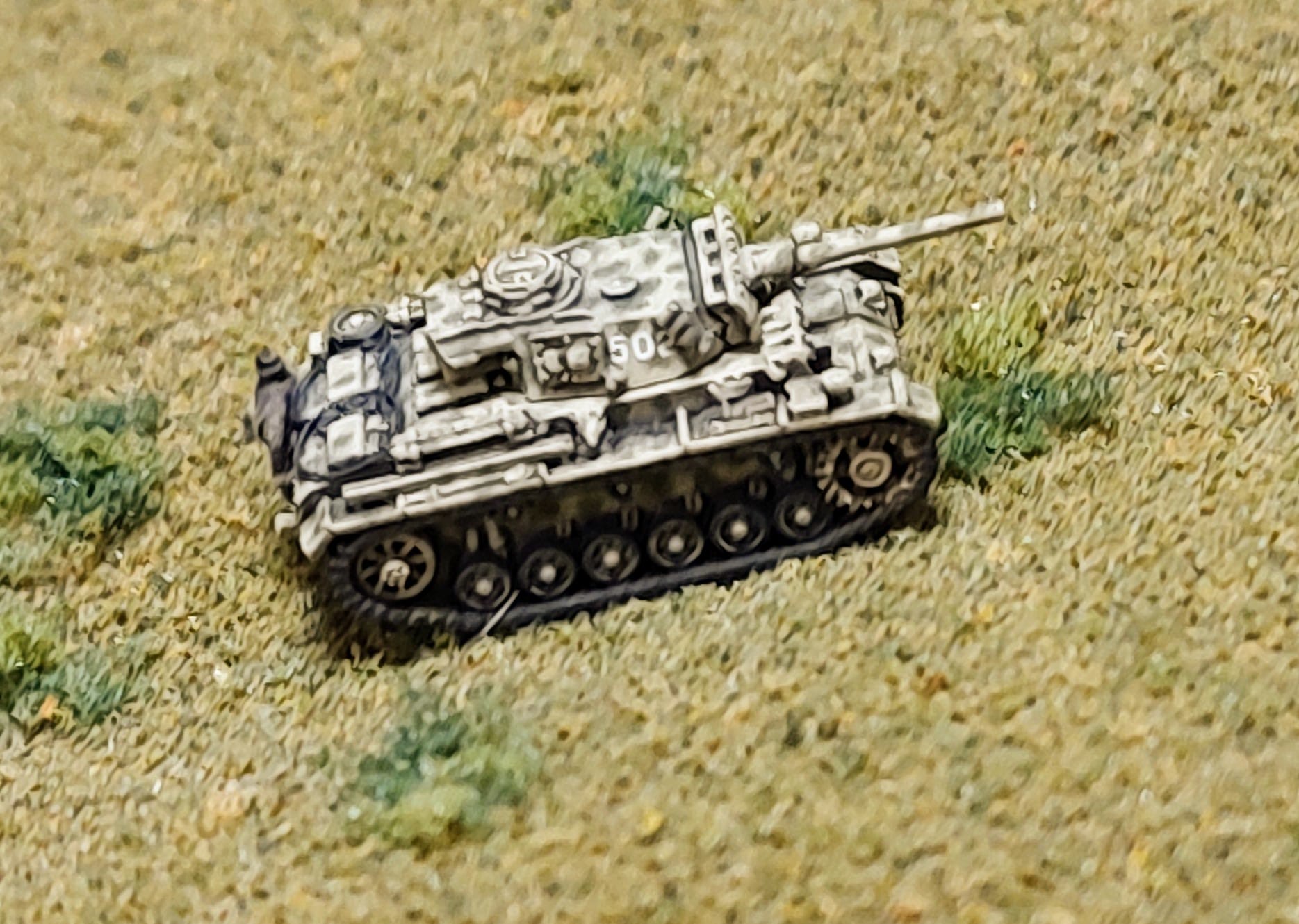 Only the XO remains of the 5 Panzer IIIs on the German left. 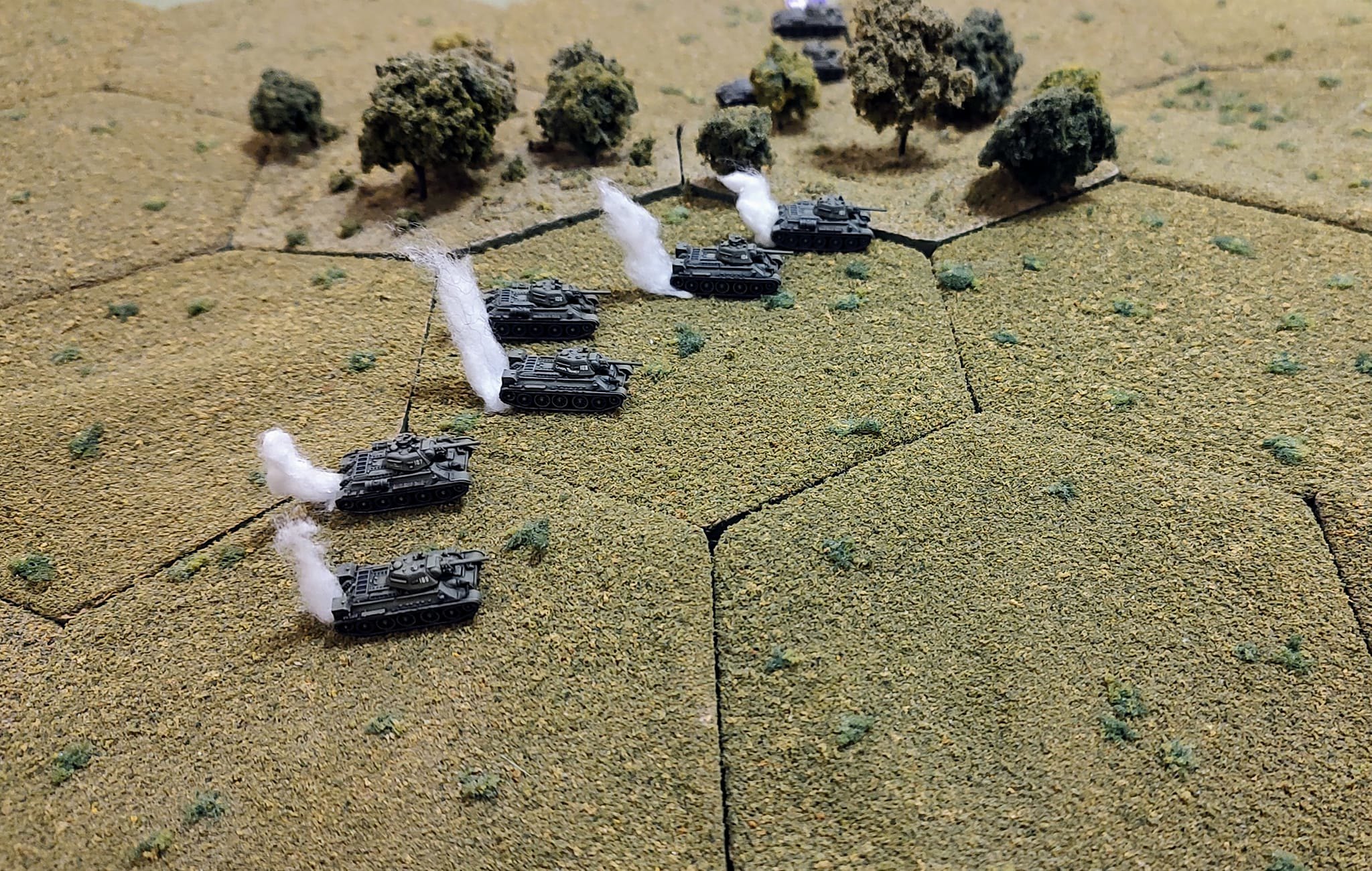 The Russian losses in 1st Company have been extremely high with 7 out of 10 tanks knocked out and 1 more immobilized. 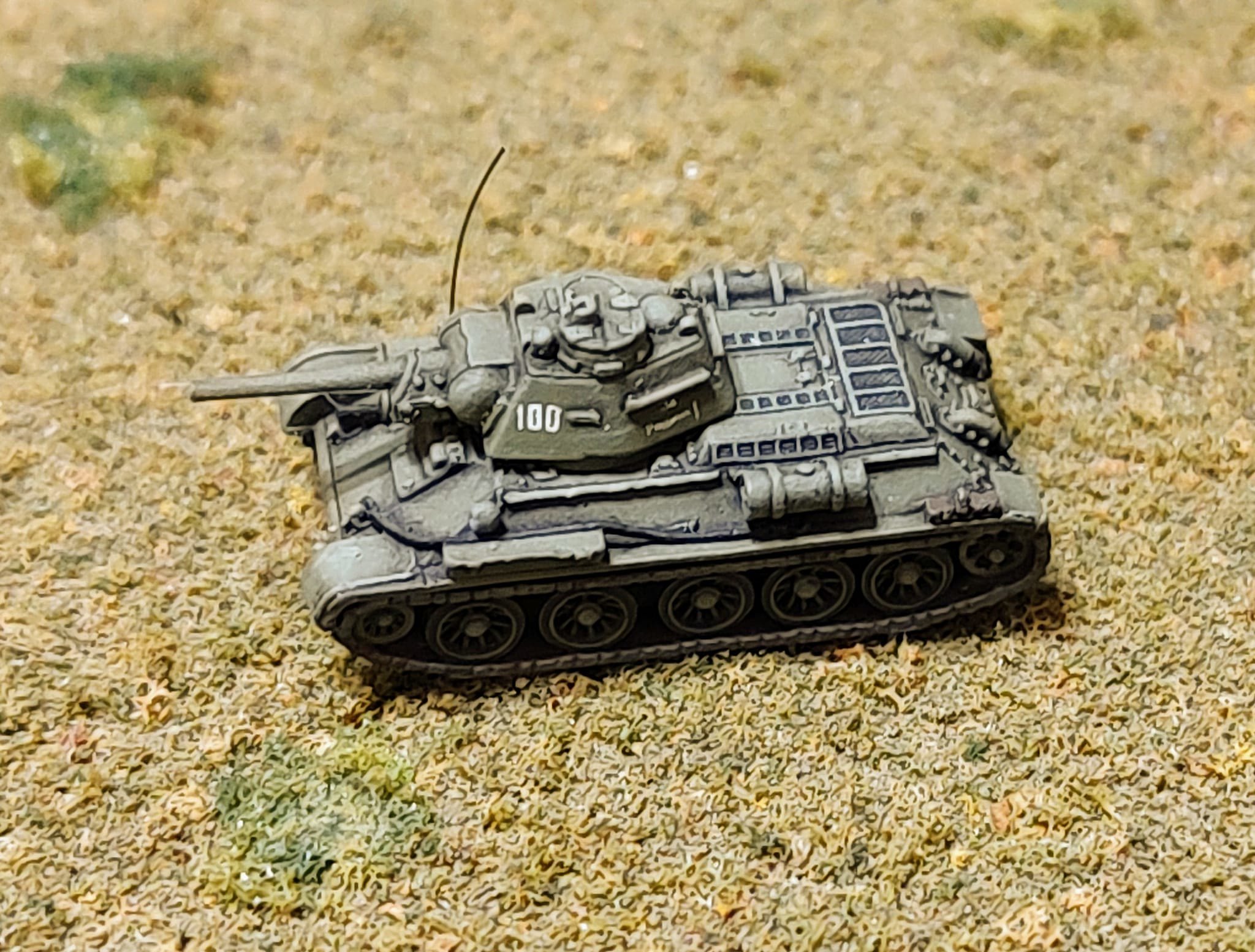 The Russian 1st Company CO survives so far along with the 2 remaining tanks of 1st Platoon. 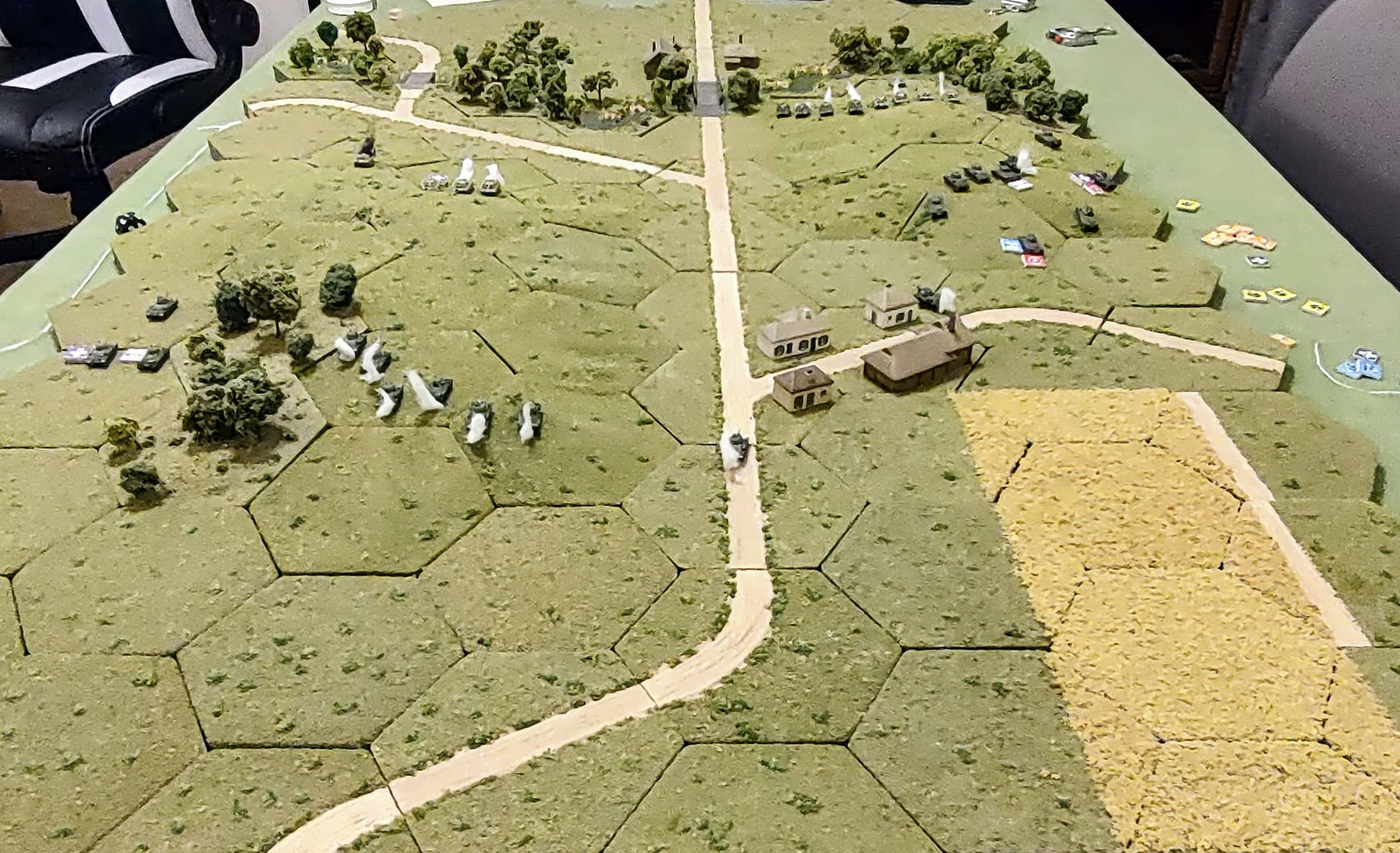 The end of Turn 5 from the Russian side. 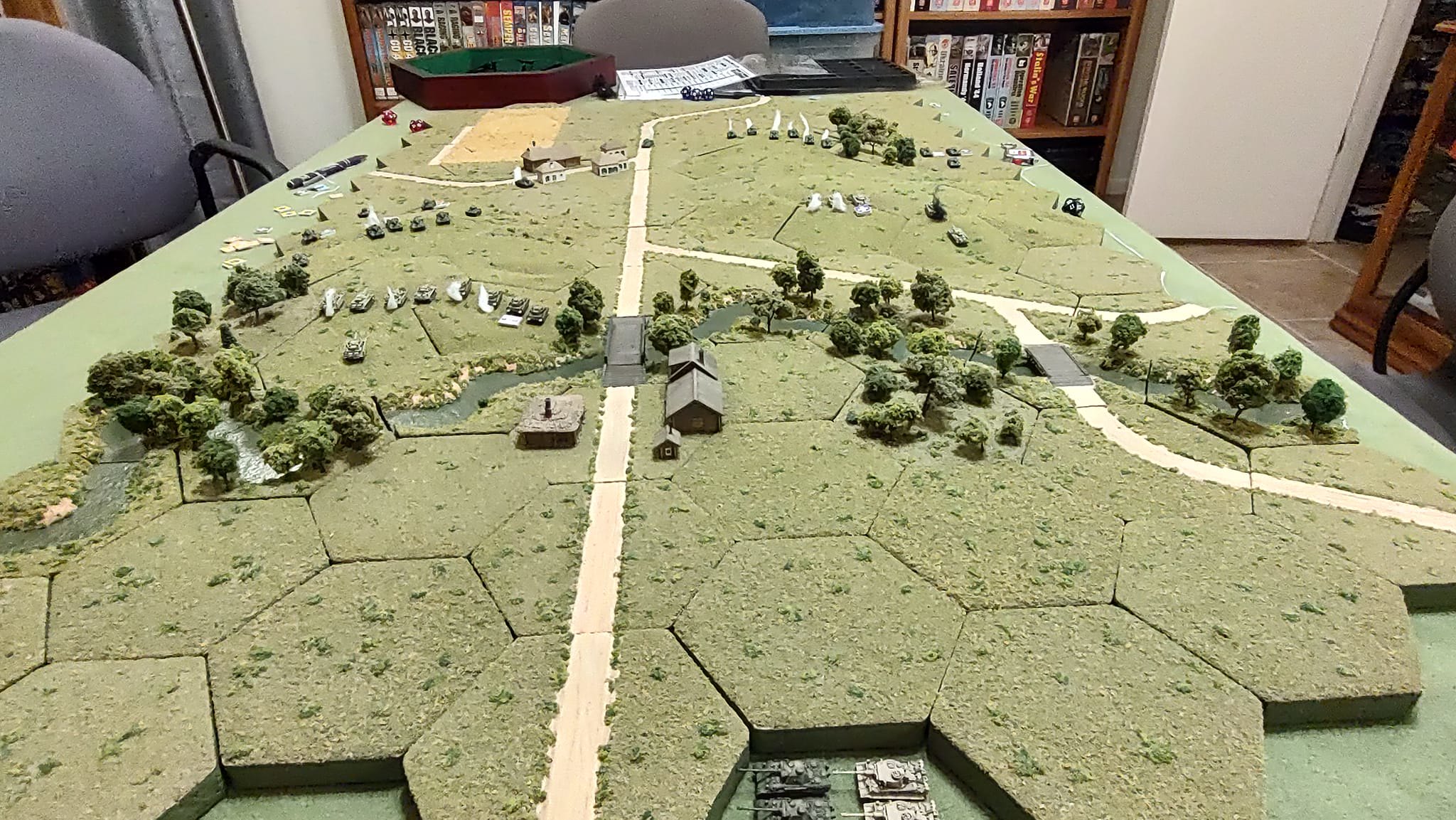 The end of Turn 5 from the German side.

Spectacular Pete! It's a micro armor blood bath! I am really enjoying your battle reports and I'm looking forward to Turn 6!

Your posts are very inspiring as well. I think I'm just about ready to get my hands on the Korean War supplement to Mein Panzer and maybe go for a solo game myself. I hope ODG is paying you to be a Mein Panzer Ambassador!
Redleg's Website: micropope.webstarts.com
Top

Thank you very much, Redleg! There was certainly a lot of action in this game.
Top

Pzkw III looking excellent!
Did you ever use the GHQ Russian tank riders in your models? I noticed that they are sized a little large so I didn’t mount any yet.
Top
Post Reply
707 posts