Very detailed painting. Admirable stuff!
All blessings flow from a good mission statement.
Pogo was right. So was Ike.
"A Gentleman is a man who is only rude intentionally." (Churchill)
Top

pmskaar-
You have just set the standard for painting infantry. Very nice work. If my infantry project turns out have as nice as yours I'll be happy.
Top

Seriously Pete? Did you paint the chin strap on that dude's helmet!

Your infantry are just as amazing as your tanks!
Time on the recce is time well spent!
Top

I think he uses a microscope...

Here are some of my recent attempts: 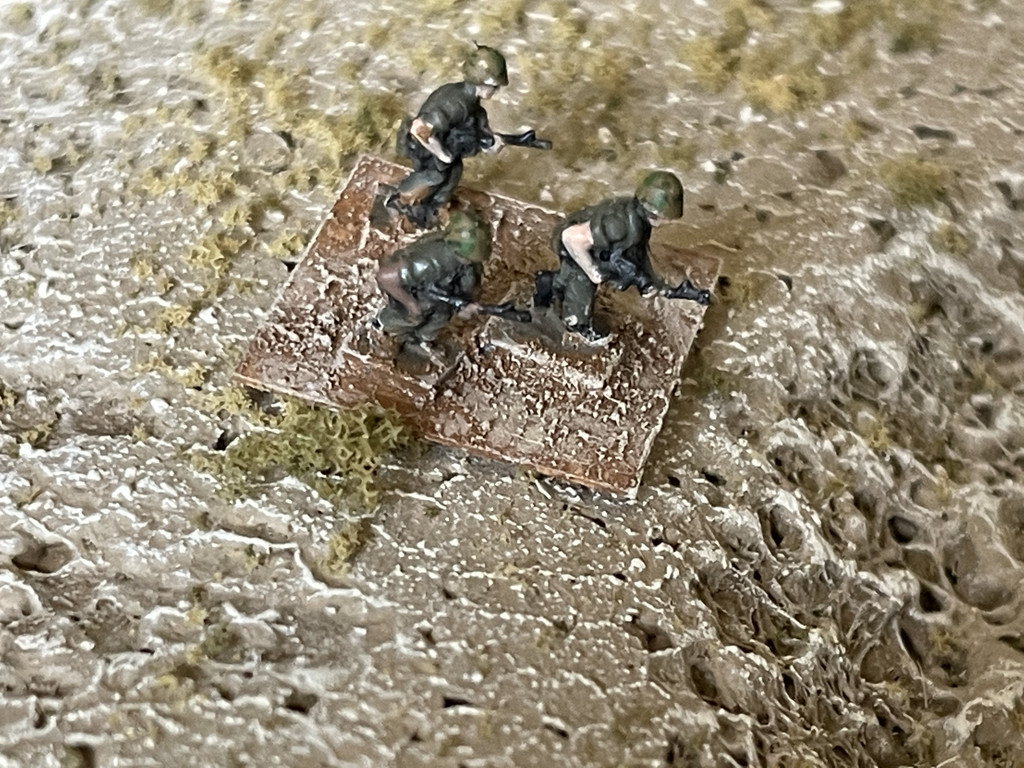 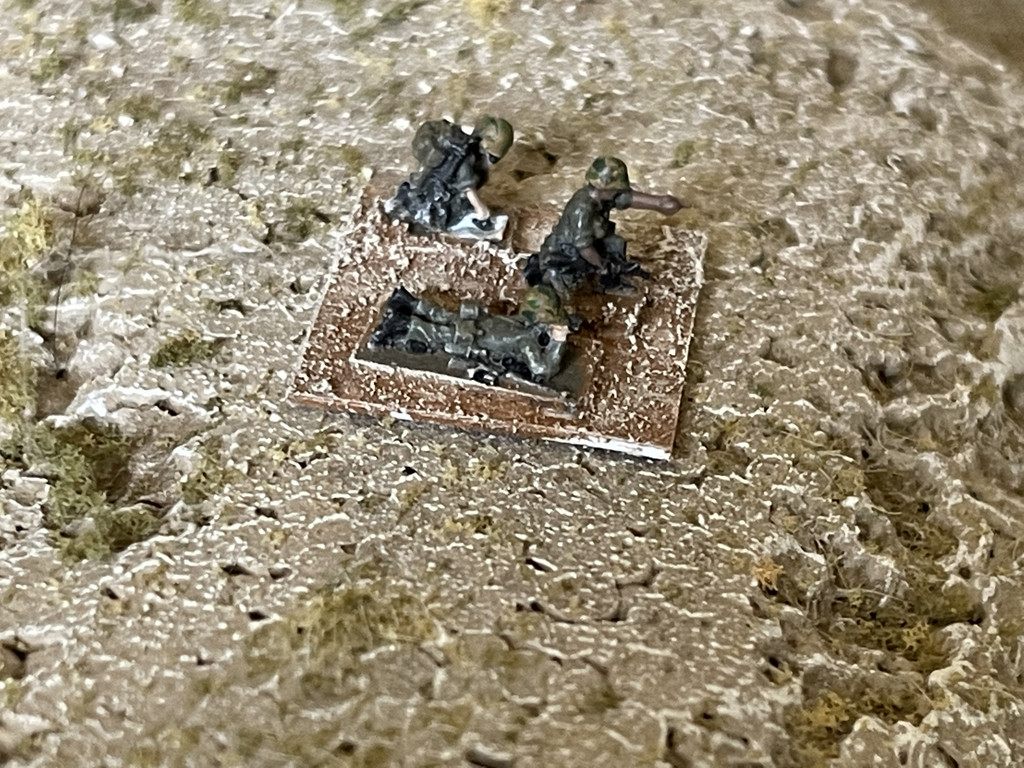 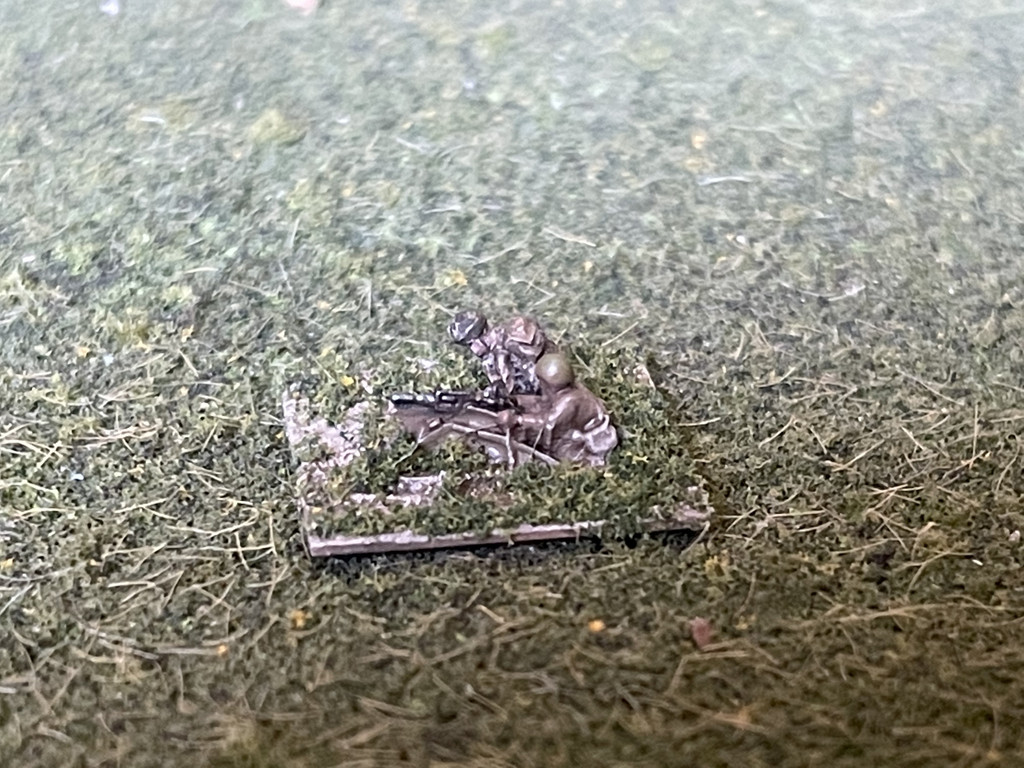 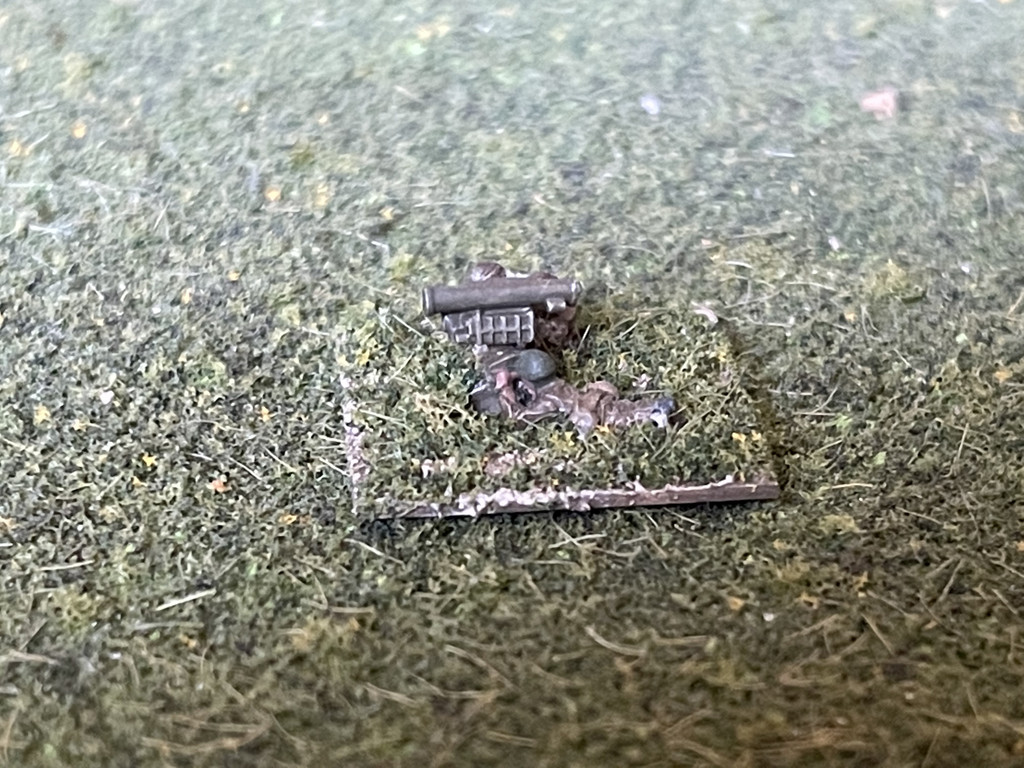 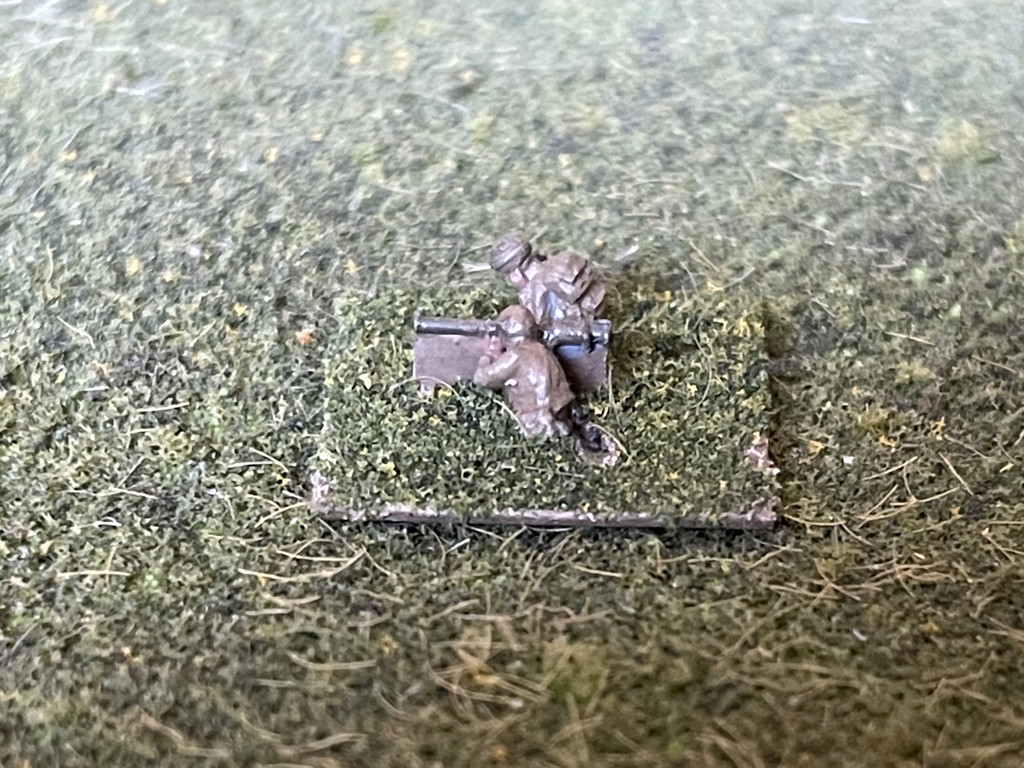 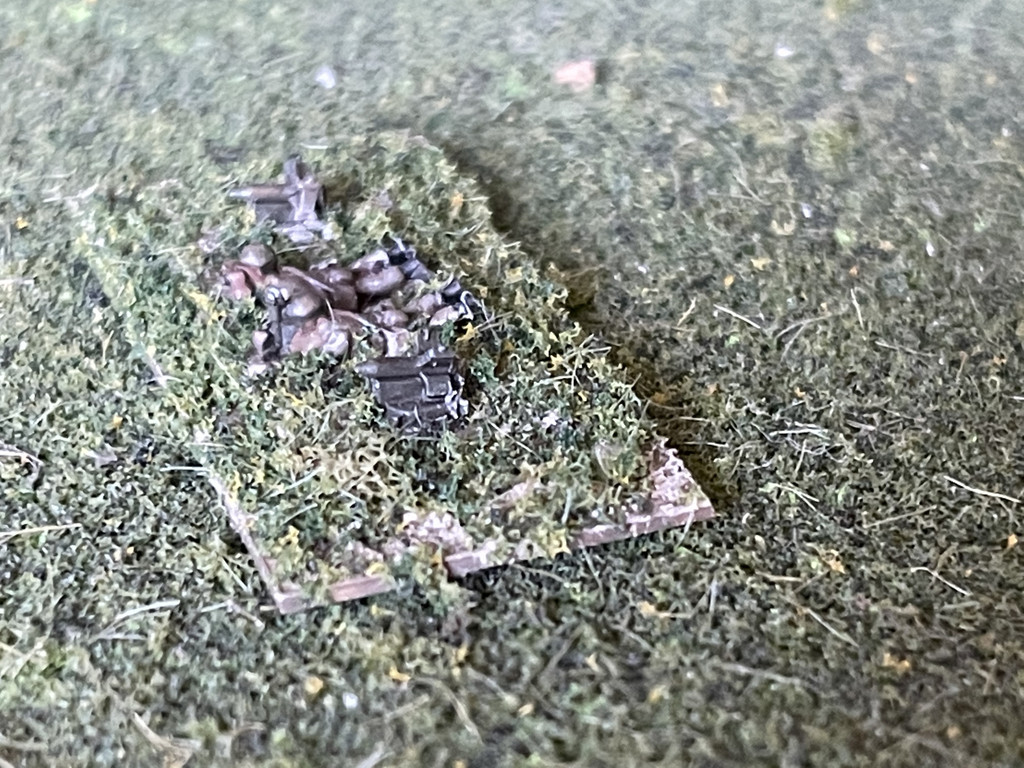 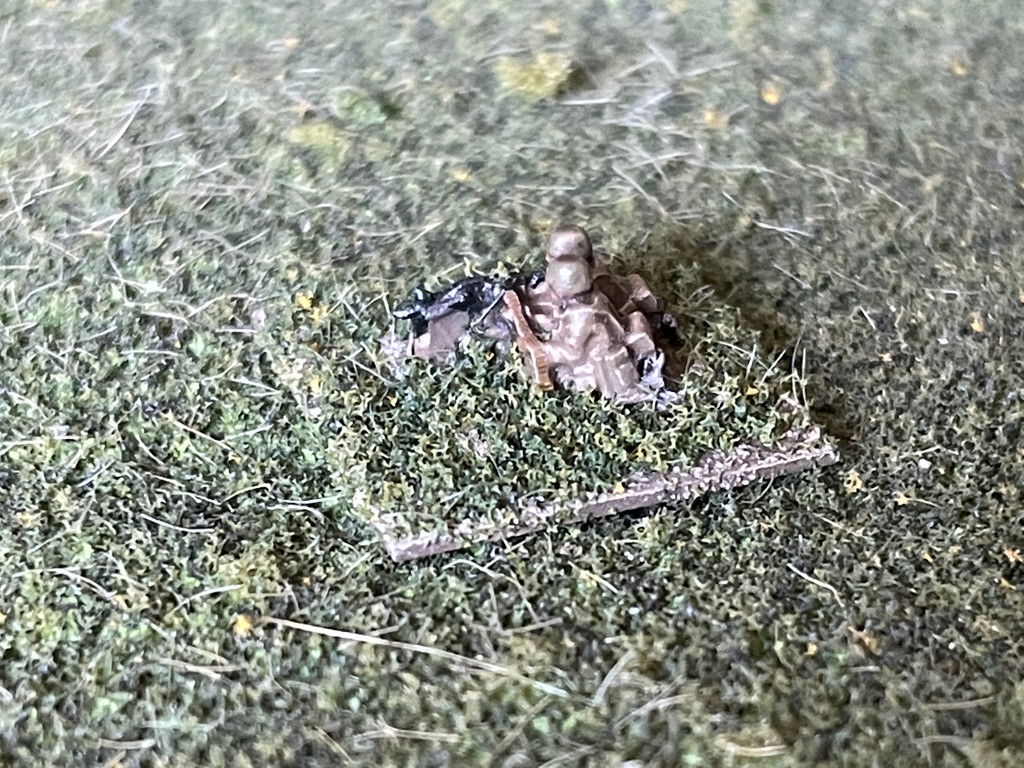 Tactics are the opinion of the senior officer present.
Top

Cav Dog, your American infantry has some different skin tones. Very nice work! That is really good and accurate. I painted the Modern American Combat Command with the various MWRAPs about 10 years ago. It came with some infantry figures and I tried to give some variety in skin tones on those guys as well.

Camo on the helmets and different skintones? That's incredible. I'm lucky if they get boots.
Top

Some flocking of infantry.

OK I was bored and had a bit of time on my hands, so I added a line to the spreadsheet to work out how much space my infantry and support weapons would take up if I lined them all up side by side.

Assuming my maths was right, of course!

That's the kind of nerd stuff I like to see Gazza. I love to see inventories and TO&Es and all manner of miscellaneous data in spreadsheets and powerpoint slides! I haven't done this one before though! Very nice! The nerdiest I have gotten lately is to do an SOI for my ACR - call sigs and frequencies for the whole regiment.
Time on the recce is time well spent!
Top

For WW2 I have 525 stands of foot of various types. For Team Yankee I only have about 300. That is basically any non-vehicle stand, so includes artillery, AT guns, FOOs, etc. I have it broken down by country but I haven't gone so far as to inventory it by type/unit etc. 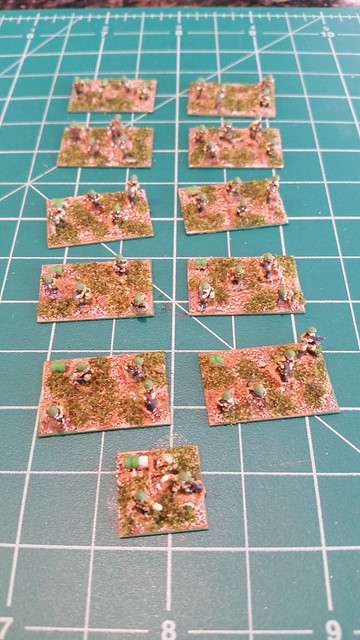 I used to base 4 for a fire team. But I made a very deliberate decision to move away from fire-team based rules about 15 - 18 years ago, and to play squad-based rules for infantry. Using fire-team (or half-squad) basing a WW2 Russian infantry company came out to about 43 stands, if I recall correctly. So a player needed 4 X more time to measure and move an infantry company than a tank company.

The produced one of two results:
1) Games that were all armor, or had only a token amount of infantry.
2) Combined arms games in which the tank battle was humming along, and then the infantry got out of their transports the games came to a screeching halt as the number of stands mushroomed beyond control, and after 1 or maybe 2 more turns the game was called because half the players had wandered off to find food, grow beards, or write novels rather than waiting for the other team to finish moving their infantry.

I really want my games to have a historical feel to them. I know wargaming will never achieve too much realism (thank God for that -- I don't need the blood all over my garage), but I do want to expand my understanding of how and why some things worked, and other things didn't in combat. And infantry needs to be there for me to get that sense.

My gaming now focuses on about 20 to 25 stands per player (maybe up to 30 for players who have good experience with the rules we are using). With squad-based stands that means about a company per player plus some attachments (an attached platoon, or a battery of supporting weapons, etc.)

To the original question -- I don't know how many stands I have. But I have:
WW2 Russians:
- A full battalion of infantry (rifle regiment)
- An SMG company (both combat stands and positions for riding tanks)
- A cavalry company (mounted only -- need to dig into the infantry stands if I want them to fight dismounted)
- A platoon of combat engineers

WW2 French:
- A company of infantry for metropolitan France
- A company of colonial infantry (Armee d'Afrique) for North Africa
- A 2-platoon company of motorcycle troops (as appeared in some of the recon TOEs)

WW2 Romanians:
- A company of infantry (including extras to implement the 4-squad platoons of 1942/43)

WW2 Americans
- 2 companies of infantry (but one of them, based on another vendor's infantry figures from the 1980s, is really not in my "current forces" anymore
- A mech cav / armored recon platoon (dismounts in team basing -- as each armored car or 2 jeep team would typically only dismount 5 soldiers)
- A platoon of combat engineers
(An armored infantry company is on the workbench at this time. Still some ways to go on them.)

My cold war forces have not been out of the box for probably 20+ years now. Not even sure where the "box" is at this point. But they are out there somewhere...

Now a few pics to round it out: 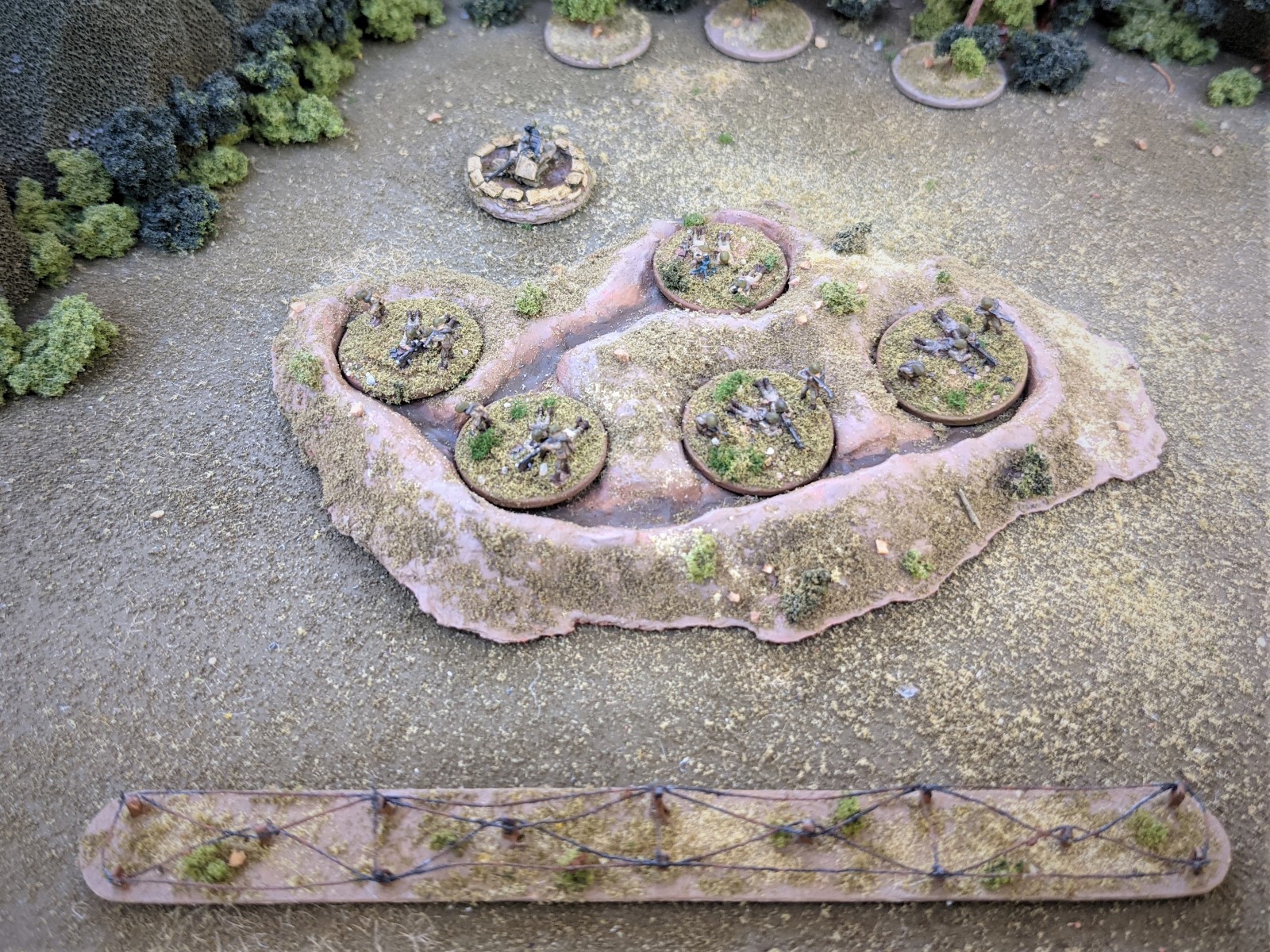 A 4-squad Romanian infantry platoon (with 60mm mortar team in support) dug in and waiting for the Russians. 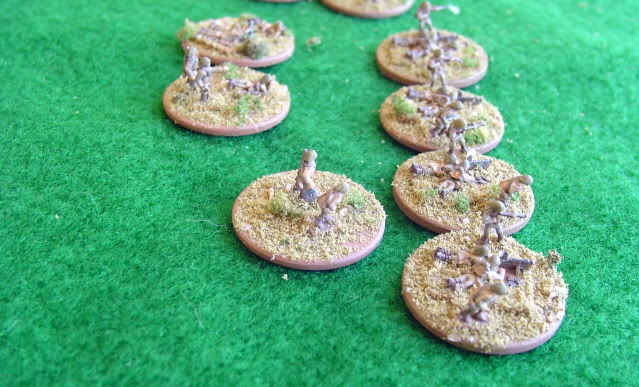 Another view of a Romanian platoon. Depending on scenario, each platoon can deploy a tank-hunter team (two figures), in this case shown carrying a Tellermine. 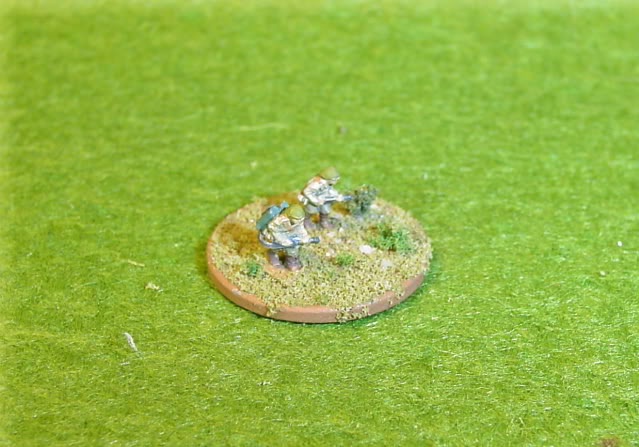 My Romanians don't get a full platoon of combat engineers, but I did manage to kit-bash up a couple of flame-thrower teams (using Italian M35 flame throwers that were provided to Romania in some quantities). 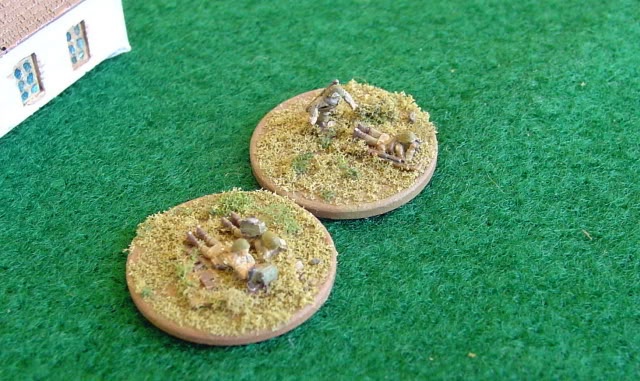 If they want artillery support (I have 100mm and 75mm gun batteries for them), whey will need forward observers. Here is an arty observation team, and a separate comms team. One limitation of Romanian infantry was the almost complete lack of radios. So my Romanians get field telephone teams with a phone operator and a line man. These have very limited mobility, so command and control units may move away from and/or back to their comms links. 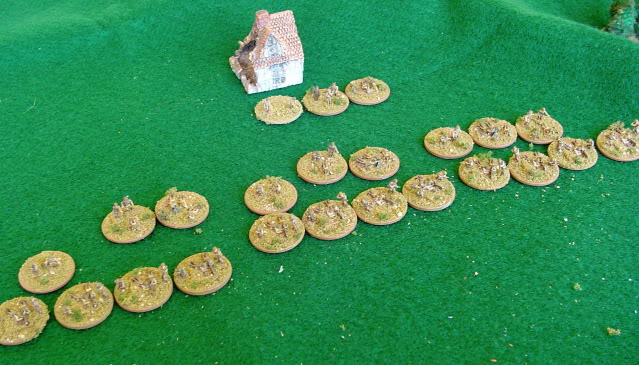 The full Romanian company on parade. 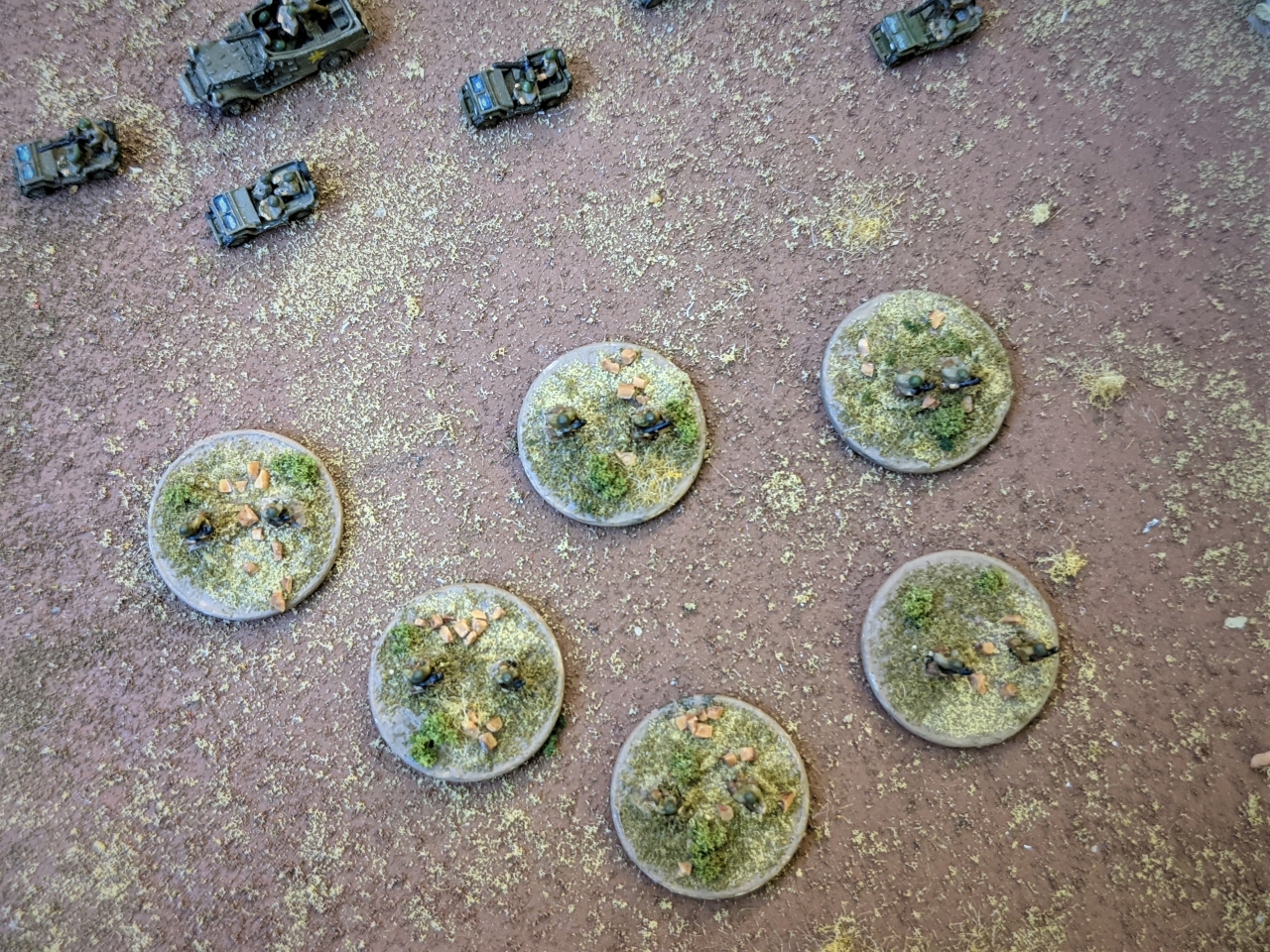 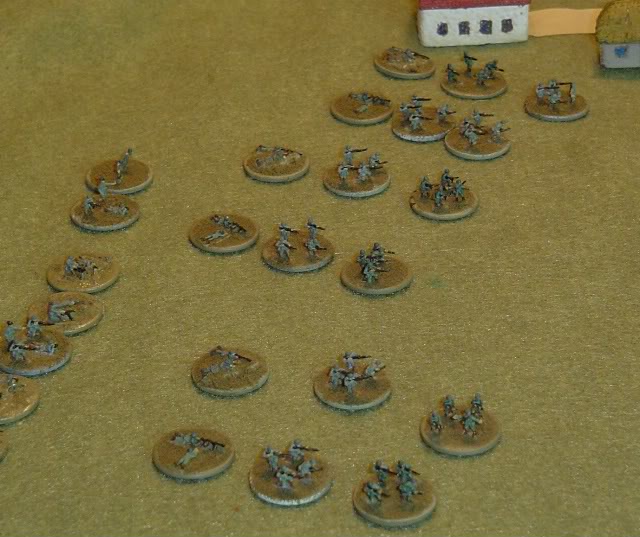 My Italian infantry company as I built them in about 2005. This was the first unit I created after joining this forum. First unit with GHQ individual infantry figures. First time I painted helmets and guns. And first time I flocked the bases. 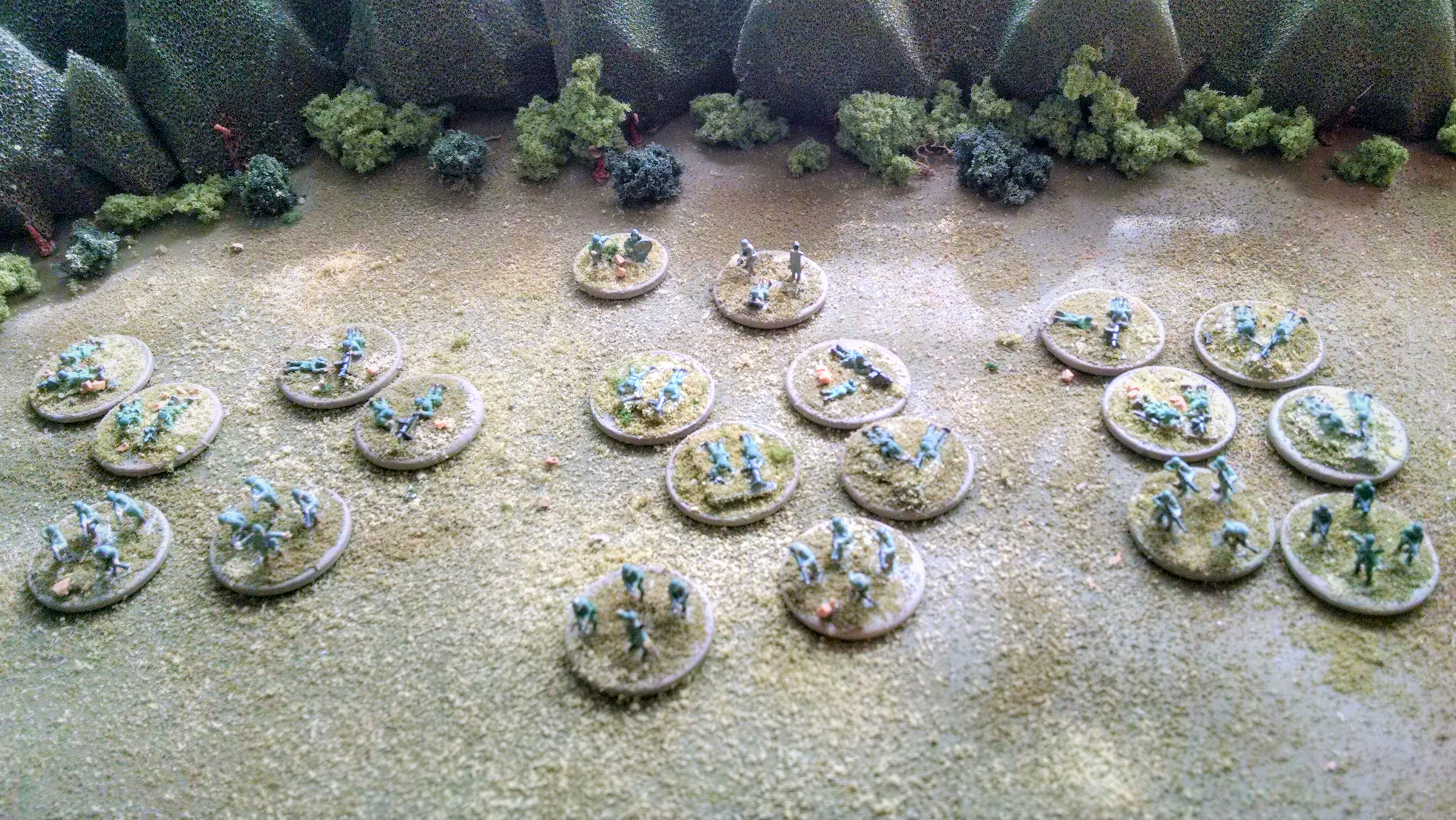 Here are my Italians after a recent refurb. I had to add a few more LMG teams (odd TOE of the Italian infantry -- each platoon had two squads, each squad had a ~10-man rifle section and two 4-man LMG sections. With NCOs it came to 19 or 20 men to a squad. Hmmm ... how to base THAT? So I did an all-rifles squad and 2 LMG teams, and each platoon gets two of these sets.

I guess that's enough for one post. Came out bloody long, I'm afraid. Maybe I should switch to decaf...

Not sure how up to date this is. I cobbled it together from abbreviated documents of my armies - I don't always update them when I add something. i really should get around to checking

Plus 1 dug-in Battalion (Infantry squads and SFMGs).
Plus Adler Battalion of Infantry in smocks with Stg44s

Great looking infantry Mark! Just curious - what differentiates the infantry for metropolitan France from other infantry?

Very impressive collections both Mark and Gazza! We need more pics of them!
Time on the recce is time well spent!
Top

As my WW2 Americans are on hand - They're all old H&R figures. They're at home for sprucing up and are at various stages.
Apologies but I can't zoom in too close with my phone - it doesn't have the macro capabilities of my actual camera.

US Infantry - pre sprucing up 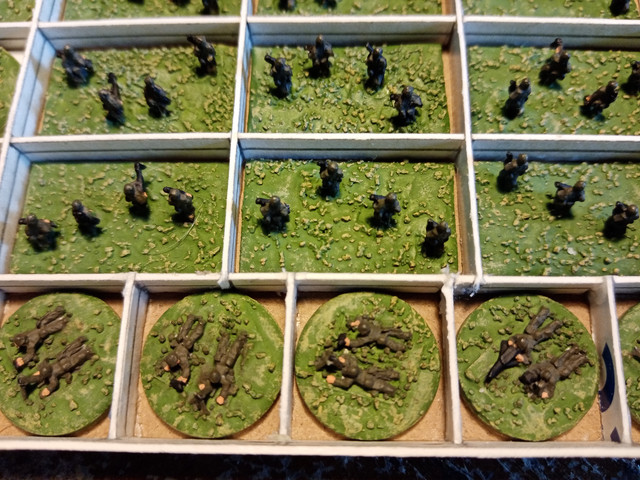 US Armored Infantry - mid spuce up 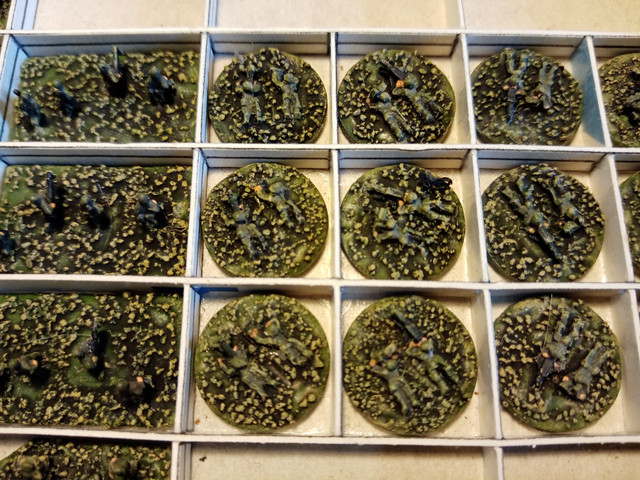 US Engineers - sprucing up complete - maybe need another coat of matt varnish on ground work. 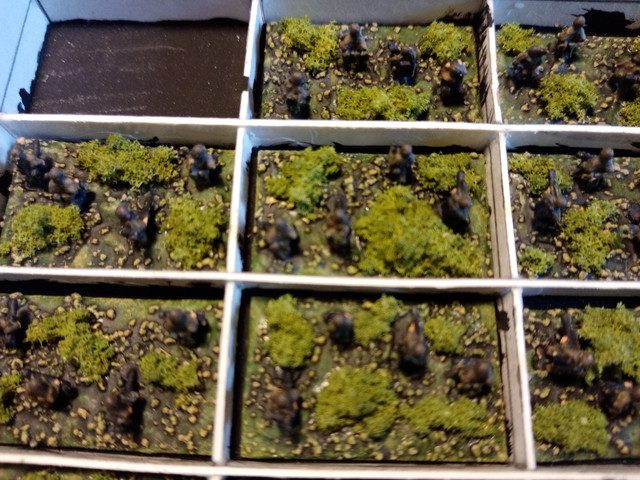