redleg wrote: ↑
Fri Oct 01, 2021 6:27 am
Just curious - what differentiates the infantry for metropolitan France from other infantry?

In my case it is mostly the uniforms, and to a lesser extent the equipment.

The French Army uniform can be typified by the greatcoat they wear and the "Adrian" helmet. In North Africa the greatcoat was a part of the soldier's issue, but it was rarely worn during the day. It's kind of hot in Tunisia and Morocco, at least during the summer. The continental uniforms, including the greatcoats were a khaki shade somewhere between green and brown. The helmets were a bit greener.

Summer uniforms in colonial forces (in North Africa, the Levant, and Indochina) were a very light tan. Also the troops were often issued sun helmets, although photos of troops in North Africa show some numbers retaining their Adrian helmets, even in the continental green.

But I have given my Armee d'Afrique for sun helmets across the board. Mostly because I have not figured out which figures to use to get the Adrian helmets without the greatcoats. Maybe the Polish figures' helmets would be close enough?


We need more pics of them! 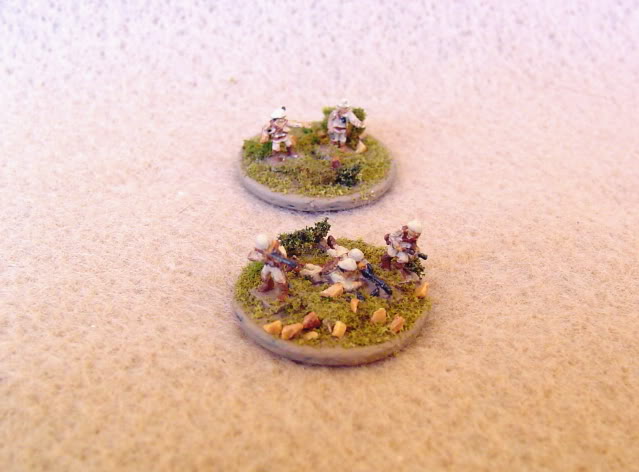 Here are some of my French infantry for North Africa. 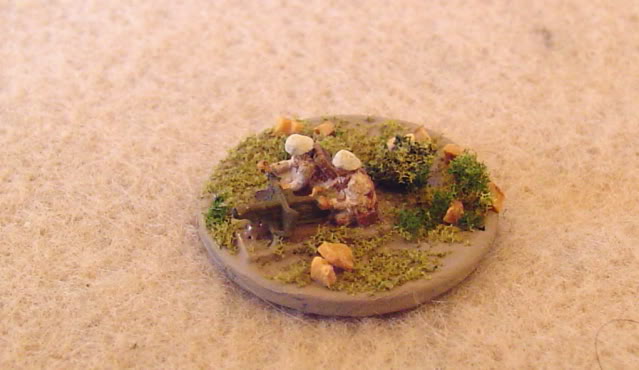 I have created a bit of unique kit for my French North African force. Here is a 37mm trench gun. This WW1 weapon was still in service with the Colonial forces during WW2.

To create my French North Africa force I used GHQ Romanian infantry and support. The LMGs are almost identical, and the oversized Romanian helmets, while not a perfect match, were about as close as I could get to sun helmets. I use the SG43 MMG from the Romanian support pack for the 37mm trench gun (I didn't use them for my Romanians -- much preferring actual Romanian kit that relying on kit the Romanians might have captured).

Hope that clarifies a bit.

Some really good posts here! Love seeing the organizations and the data.

I have used white pumice on my pennies and then paint it (plus flocking). Comes out ok but I hate see the bright copper edge of the penny sticking through sometimes…
Top

BurtWolf wrote: ↑
Sat Oct 02, 2021 5:19 am
I have used white pumice on my pennies and then paint it (plus flocking). Comes out ok but I hate see the bright copper edge of the penny sticking through sometimes…

I've used a variety of basing techniques for half groups / support weapons over the years. Not shown here are the ones on UK half pennies (which went out of circulation in 1984 and according to the same wikipedia page were 17.14mm in diameter and 1mm thick). 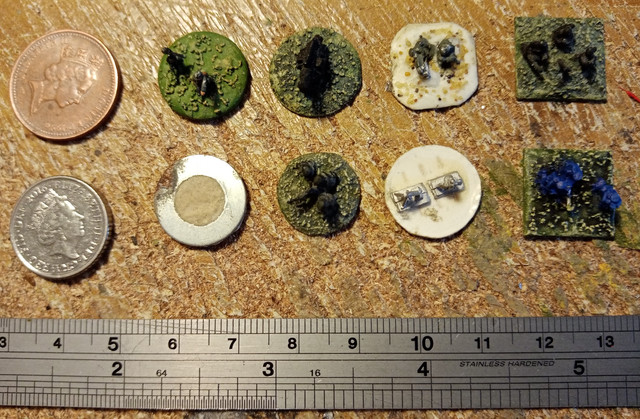 From left to right.
A UK penny (top) and 5p coin (bottom) for comparison.
The washer I used to use - when I could get a few for £1.00. Top has a Half Group on, the bottom has been stripped. You can see the remanants of the filler in the middle and (just about) the card base at the bottom right.
A couple of round card bases. I used to draw around a 'round thing' and cut them out. The 'round thing' would vary over time.
A round card base pre filler etc. (bottom). A 15mm square base with the corners trimed off (top).
My current go to method. Just 15mm square bases. Quicker and don't look too bad once finished. The bottom blue one is a MG from a Soviet Naval Infantry company - about half finished. 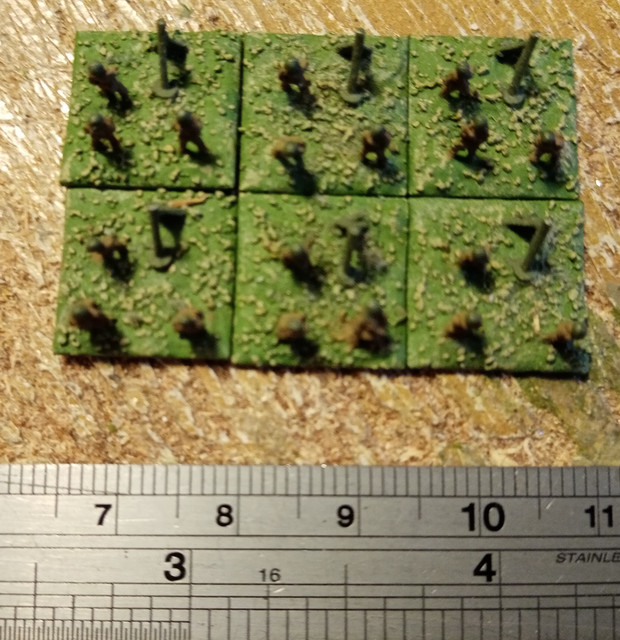 A few posts back, if you look at the Russians it says 0 Heavy Mortars - which is sort of true. I did inherit 18 from a lad at the local model shop who was selling his micro/ I basically got quite a bit cheap - including the 12cm mortars. I got as far as basing them. Although they look like they're at parade rather than in action. They fell casualty to the house moves I've mentioned before. These may be the only survivors. There was a seventh but it was partially 'squished'.
Top

On a related subject, here's a bunch of German Flak pieces conveniently grouped together in the same storage box. One thing I find funny is despite the vast majority being in Luftwaffe field blue (or something vaguely resembling it) the 88s in towed config are in dunkelgelb. Very cool pics you guys, and great info on the organization and basing techniques for your units. Your infantry are very inspiring Mark & Gazza!
Time on the recce is time well spent!
Top

I paint the coins I will be basing my figures on first before I mount the figures. I use a cheap craft-store acrylic paint in a dull brown color (called mushroom) as my dirt tone. I suppose I should spray-prime the pennies too before I paint them, as the acrylic would have better adhesion, particularly around the rims. But I seldom bother.

To mount the figures I use a method I learned from ACWBill on this forum many years ago. No glue, no pumice, all done in one sitting.

The core ingredient is Acrylic Gel Medium. With this material I lay down the texturing of the ground, the paint for the color of the ground, and the glue to hold the figures and the flocking material all in one step. For those who are not familiar with this product, the reference to "medium" is not placing it between small and large, but rather identifies this material as the carrier (the medium) for acrylic paints. If you are mixing your own paints you add coloring agents to this stuff. Basically is is the sludge at the bottom of the jar before you stir / shake your paint up. You can buy it at the craft store -- I bought this tub about 12 years ago and am now more than half way through it, so I hope to need a second one before I leave this world -- but that is not yet sure.

This stuff has the consistency of pudding. It is white in the jar, and dries dull and colorless, transparent if thin but opaque and taking on a dull gray tone if thick. If you add any acrylic paint and stir it a bit it will take on a diluted form of that color.

It provides the adhesion of your paint to the surface you are painting. It is also the reason that it's hard to unscrew the lid of your old paint jars. In other words it is a very capable glue. In fact it is sold as a household glue by several brands (for example Loctite brand sells it in a tube as glue.) I find it is at least as good as white glue ("Elmer's" in the US), but it is far easier to work with in terms of shape and color, and it does not shrink as much as it dries.

I take out a fair bit into a tub, put a few drops of my dirt tone paint into it and mix it around. This is then piled onto a penny to about 1/2mm thickness (as thick, or a bit thicker, than the cast-on base of the figures). I then push the figures into the glob on the penny. Then I carefully dab around the cast-on bases of the figures a bit with a brush to get the gel up to and even a bit over the edges of the bases. I then crumble a bit of model RR shrubbery over the stand, and sprinkle a bit of model RR talus (small stones) over the stand. If the troops are for Tunisia / Sicily I will then use a small dab of yellow model RR flocking, and sometimes even a bit of model RR static grass. I then basically bury the stand in green model RR flocking. And I'm ready for the next stand.

After about 15 or 20 minutes of setting time, I pick the stand up and tap it on it's edge to shake off the loose stuff. If some of the flocking stuck on the figures I might go over them with a fully dry paint brush to sweep it away. They are then left to dry fully (a couple hours maybe). And then they get 2 coats of Testor's Dullcoat to both ensure the colors are flat and to protect everything with an overcoat of hard enamel (it helps hold the flocking, shrubbery and talus in place). 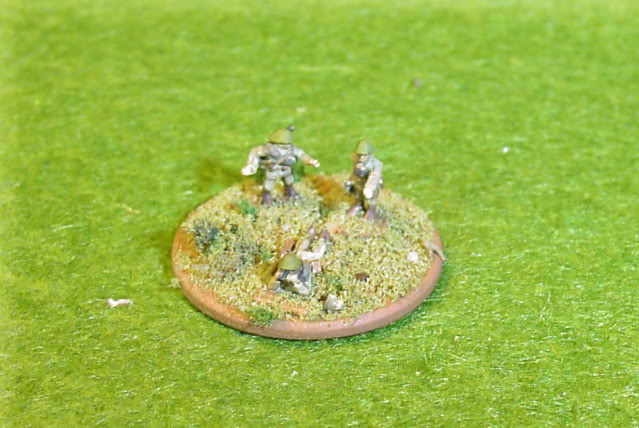 Here is a view of the results. In this case a Romanian platoon HQ.

I use US 1-cent coins, which measure about 19mm in diameter, for my infantry. I also have tried to use Euro 1-cent coins for my half-stands, but the great advantage of using US pennies is that they are always available to me (I can always dig a few out from between the sofa cushions or under my car seat if I need more). I have tried to collect Euro cents during my travels, but alas travel has been a no-go for the past year and a half, and even when travel is available it is not reasonable to wait until my next trip to Munich to finish a project that is only 1 base away.


I have settled on a kind of standard for organizing my bases. The standard infantry squad is based 4 figures to a stand. Full sized special-purpose squads (ie: 8 - 12 men) are based 3 to a stand. These may be gun crews, command elements, engineers, etc. And smaller teams (support weapons crews, command elements, etc.) are based 2 to a stand. With these last two I will need to look at the figures to determine what kind of special purpose squad or team it is. But they are far less common than standard infantry squads.

So at game time it is easy to identify which are the infantry stands, where the special purpose guys are, and which stands die quicker (the rules I use make full sized squads of 8 - 12 men twice as hard to kill as half-squads of 3-6 men). 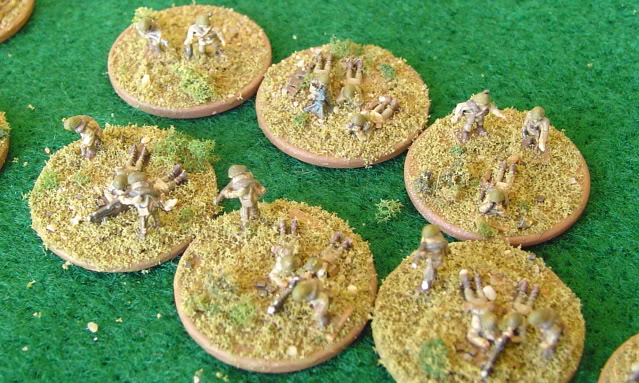 Here is a late-war Romanian infantry platoon. It is quick and easy to see the rifle squads, the command squad, the mortar squad, and the tank hunter team.

Great looking infantry Mark! I may need to try some of that stuff - it sounds like it's way easier than what I'm going!
Time on the recce is time well spent!
Top

For my basing material, I have gone with flat metal bases by Wargames Accessories as I did not want the infantry to tower over my unbased tanks and trucks.

I base 4 figures to a 3/4" square base to represent my squads. That would typically be 8 to 12 men in the real world but I find 4 guys fit on pretty well without crowding. For my teams, I base 2 or 3 guys on a 1/2" square flat metal base or for a couple of prone guys I might use a 1/2" x 3/4" base so they are not falling off the edges.

Here are a few pictures. The first two are a couple of squads and then some teams. The last picture of the Russian AT rifle shows the longer team base. 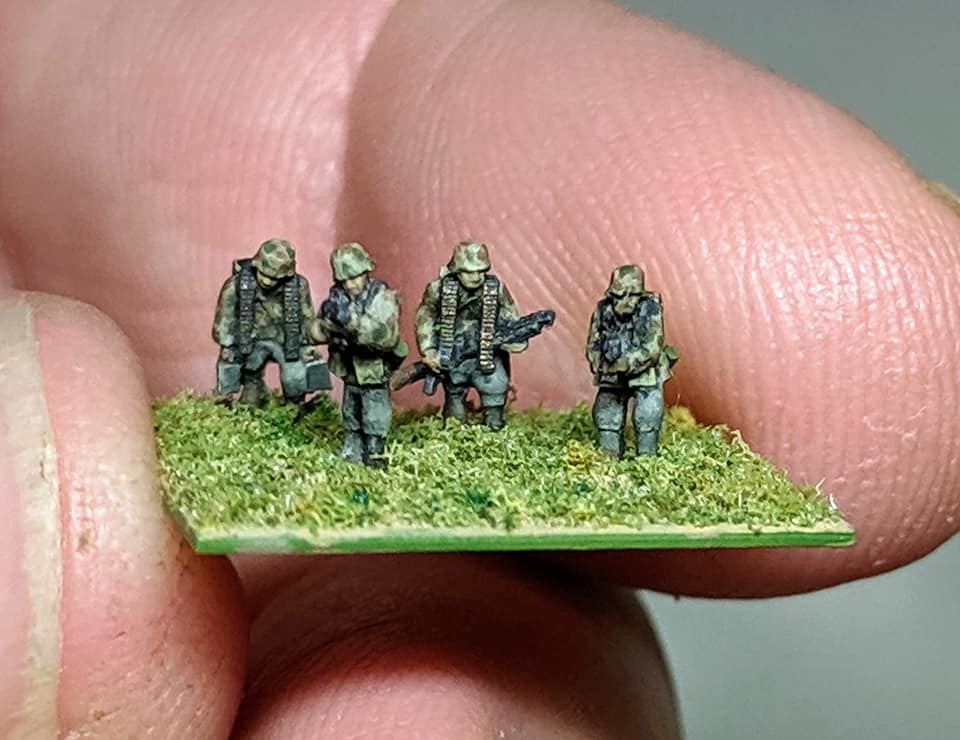 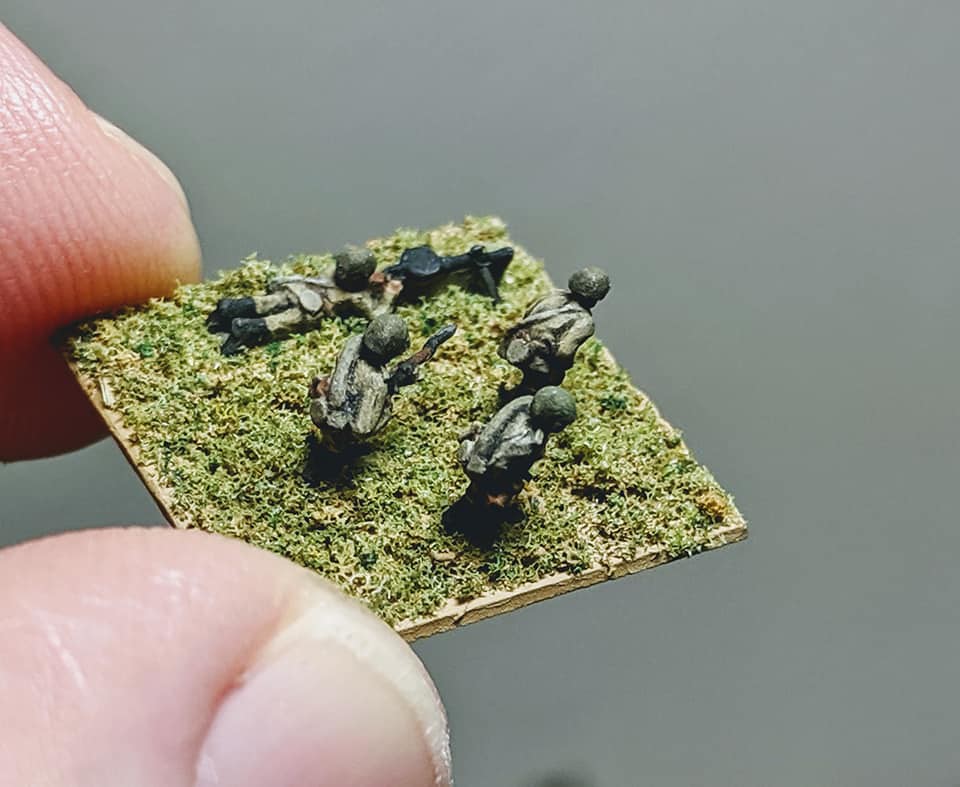 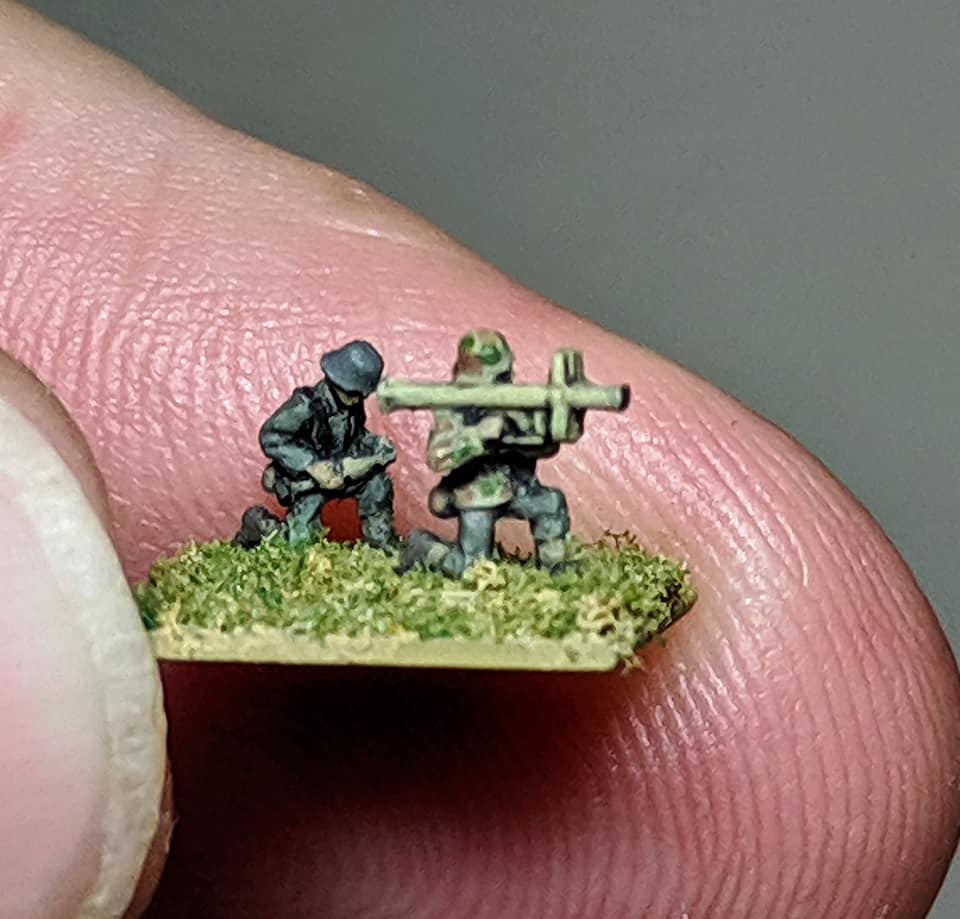 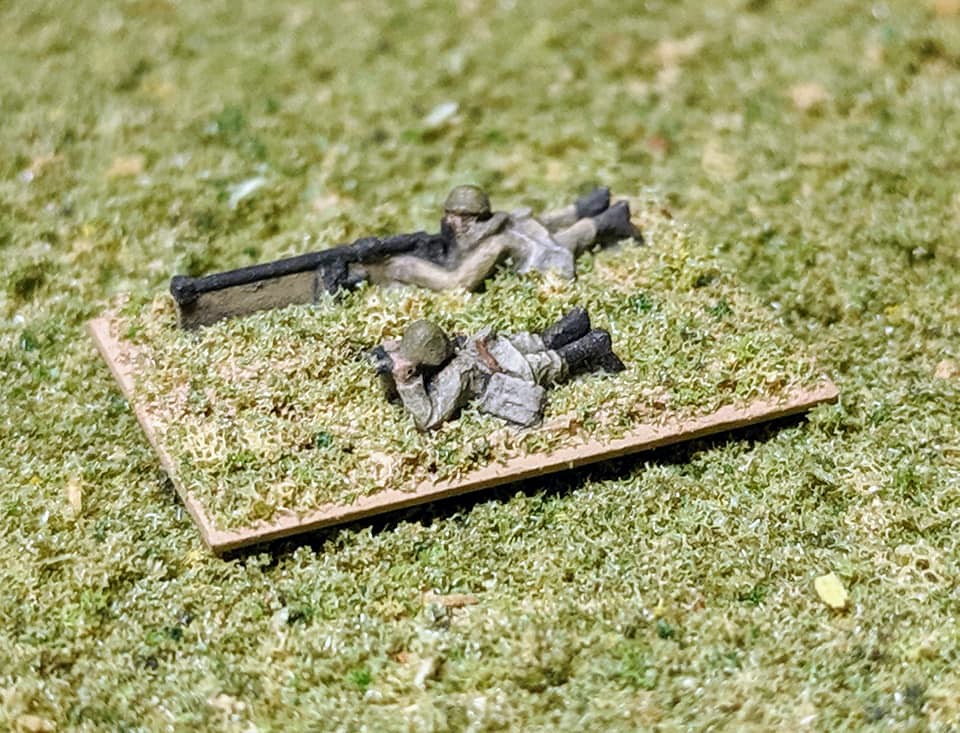 Those look fantastic, great job on the camo smocks.
Top

Those are beautiful Pete! I'm with Bill - the smocks are awesome! And I can just about count the number of rounds on those MG ammo belts!
Time on the recce is time well spent!
Top
Post Reply
55 posts