I use a lot of little plastic parts boxes- a dollar each at dollar stores, and for some reason 2.90 for the exact same box at Grainger. Then the little boxes go in larger plastic tubs.

But clearly, I must professionalize the labelling. That's organization!
Top

I'm with you, Ben! After seeing how organized some of you guys are I feel like I need to step my game up!
Mech, how big is your display case? I think I've seen the GW cases - the ones with all the padding set up for the figures? Or maybe there are other cases?
Time on the recce is time well spent!
Top

I am using some 30 year old parts tray boxes. On many drawers of miniatures I have a sheet of balsa on top of the initial layer of minis and another layer on top of that. I think these particular tray boxes were Canadian only (probably from Canadian Tire from back in the day. These are wide and low drawers made of a hard clear plastic. The trays measure 2 3/4" wide. 5 7/8" long and 1 1/4" deep. I have an assortment of sizes from 3 wide by 3 high up to 3 wide by 7 high. I also have two variants (maybe different years from the same company as the individual trays are identical) some have dovetail slots and pegs molded into the tops and bottoms while others only have a square hollow molded into the top with a matching base on the bottom to allow these to stack. The dovetail ones are made from hard plastic (styrene?) while the hollow insert designs seem to be made of a "softer" plastic.

BTW I would kill to get more of these, any size or just the drawers as a couple of them have died or gone AWOL over the years. All trays (both styles) are made of clear or clear smoke coloured hard plastic. If anyone has or knows where some could be gotten please let me know. Thank you.
Top

If I have a full battalion, tracks and wheels, I use boxes like redleg used for his ships on the previous page. It takes that kind of space for most of those. For the rest - all the tracks and selected wheels, I use a plastic, lidded box I get at WalMart in the kitchen aisle. I have a variety of boxes collected over the years, as some were discontinued. I prefer a company-wide box. Sandpaper glued to the inside bottom helps keep the vehicles from sliding around on the slick plastic surface. I store by battalion-level organization.
All blessings flow from a good mission statement.
Pogo was right. So was Ike.
"A Gentleman is a man who is only rude intentionally." (Churchill)
Top

For microarmor, I use old C-in-C and I-94 Enterprises storage boxes. I usually carry them in tool boxes.

For ships, I use Sterilite Small Clip Clear Boxes. They have latches to secure the cover. I line it with padding. I can fit eight of them in a fabric storage bin.
Last edited by whenimaginationfails on Sat May 01, 2021 6:32 pm, edited 1 time in total.
Top

Thanks for the ideas, I don't have enough 6mm vehicles to fill a box already (I have 8 models from other manufacturers that I was disappointed with, and am waiting for a parcel with couple dozen GHQ minis) but I was looking for storage options that would be easy to, well, store, but also easy to carry around, as I'm going to move abroad soon and to get myself one of these Costa Blanca homes for the holidays.
So, it'd be great if I could carry little company-to-battalion sized forces around and have a couple games with potential other players while on holiday.
Top

I have been using MDF trays that you assemble yourself bought from another company. I chose them because of the number of models each tray can store, the durability because we move regularly, and added protection they provide. I also use magnets on my models so I put magnets on the foam sheets in the trays to hold the models in place 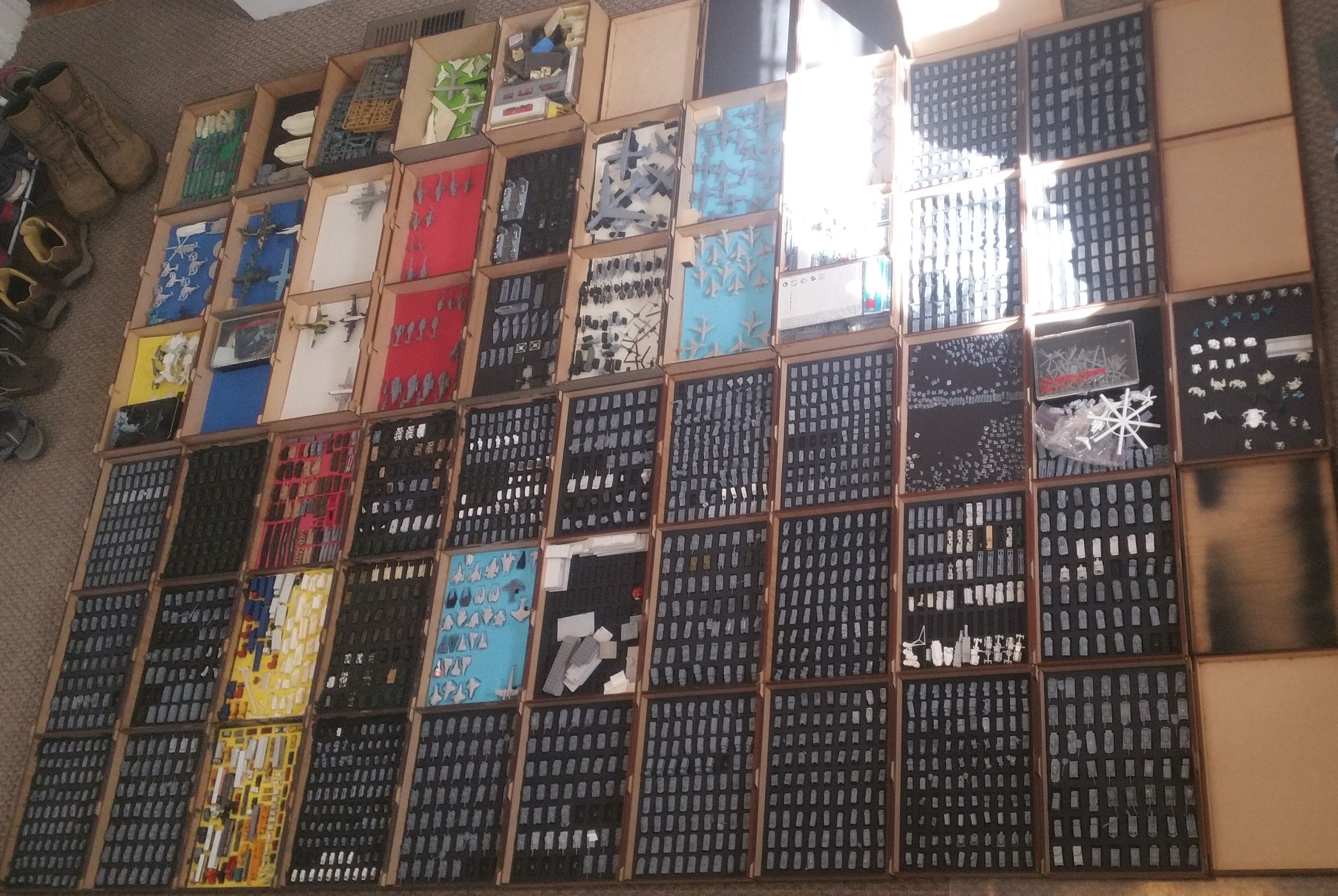 This is a view of the majority of the collection from a couple of years back. You can get an idea of how many models and the different types you can store in the trays. In the next two photos you can see how they stack up to make storage and transport easier. 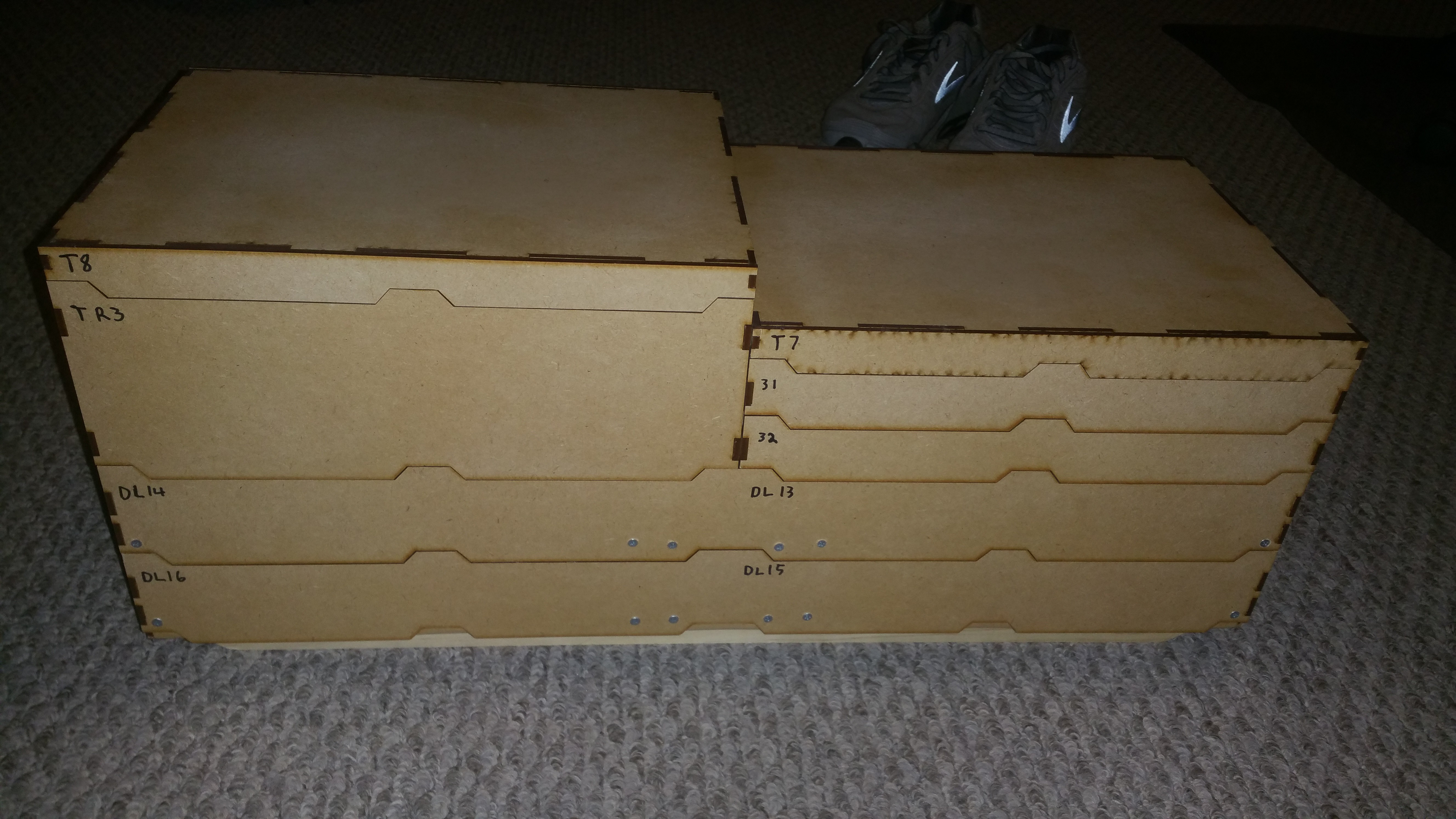 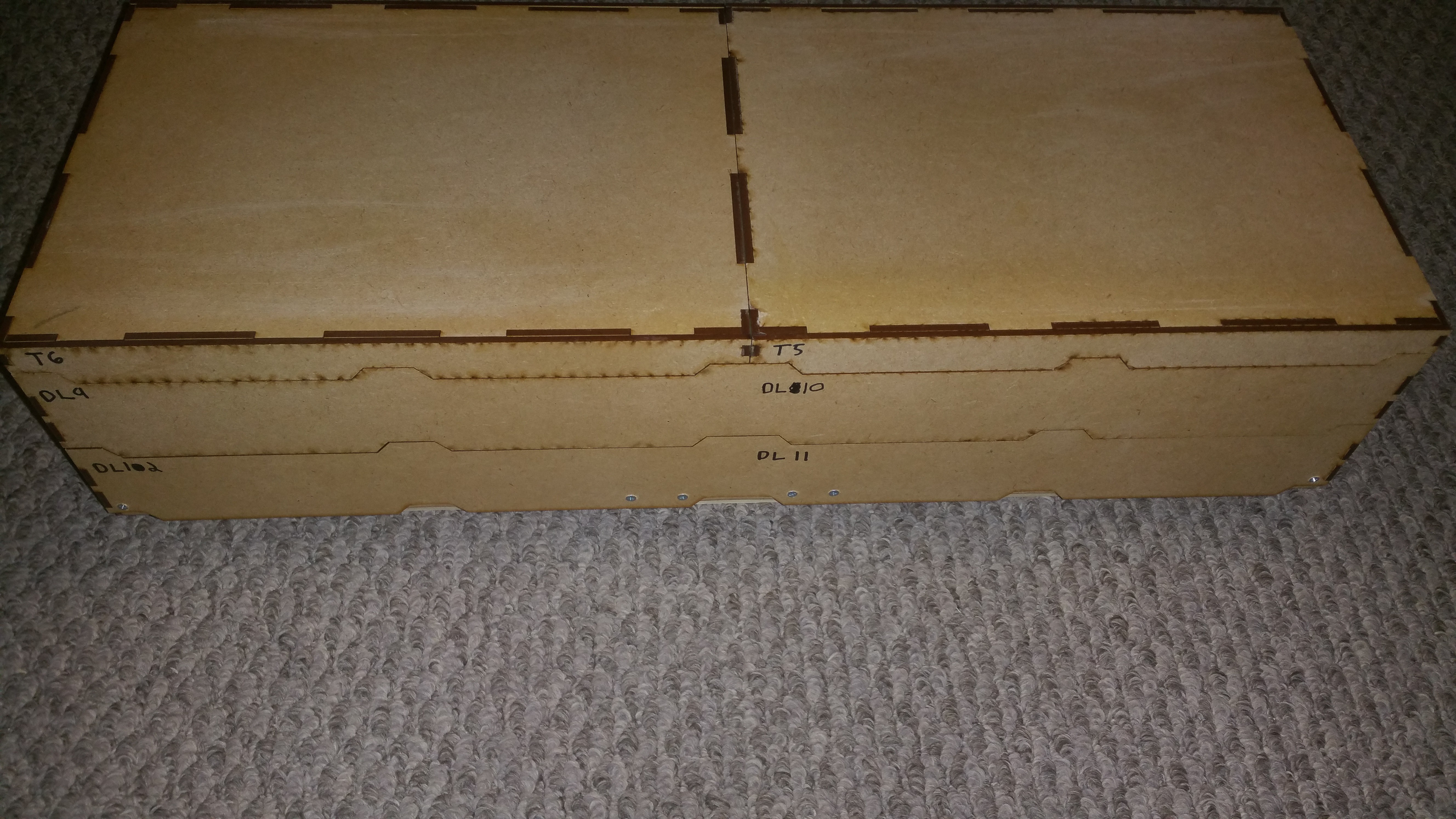 These next couple of photos show different trays and the different ways models are stored. For some I use an extra layer of foam that has been pre-cut by the vender (example HEMMT and PLS tray), others I use a layer of foam I cut to match my models (example brown water navy tray), then sometimes it is just the magnets and spacing that protects the models (example AMP suits and misc.), and finally there is the infantry tray which some of the infantry have sheet magnets glued to the bottom (not the best result) and others have a 1/8" of 1/4" metal disc like you see in you paper hole punch but from a hand held metal punch and a piece of flashing they use in roofing glued to the bottom (this option seems to work better for storage). This may seem like overkill trying to keep models in place and it is until you factor in movers moving you every 2-3 years. When movers get involved things get bumped, flipped, and just plain beat up. 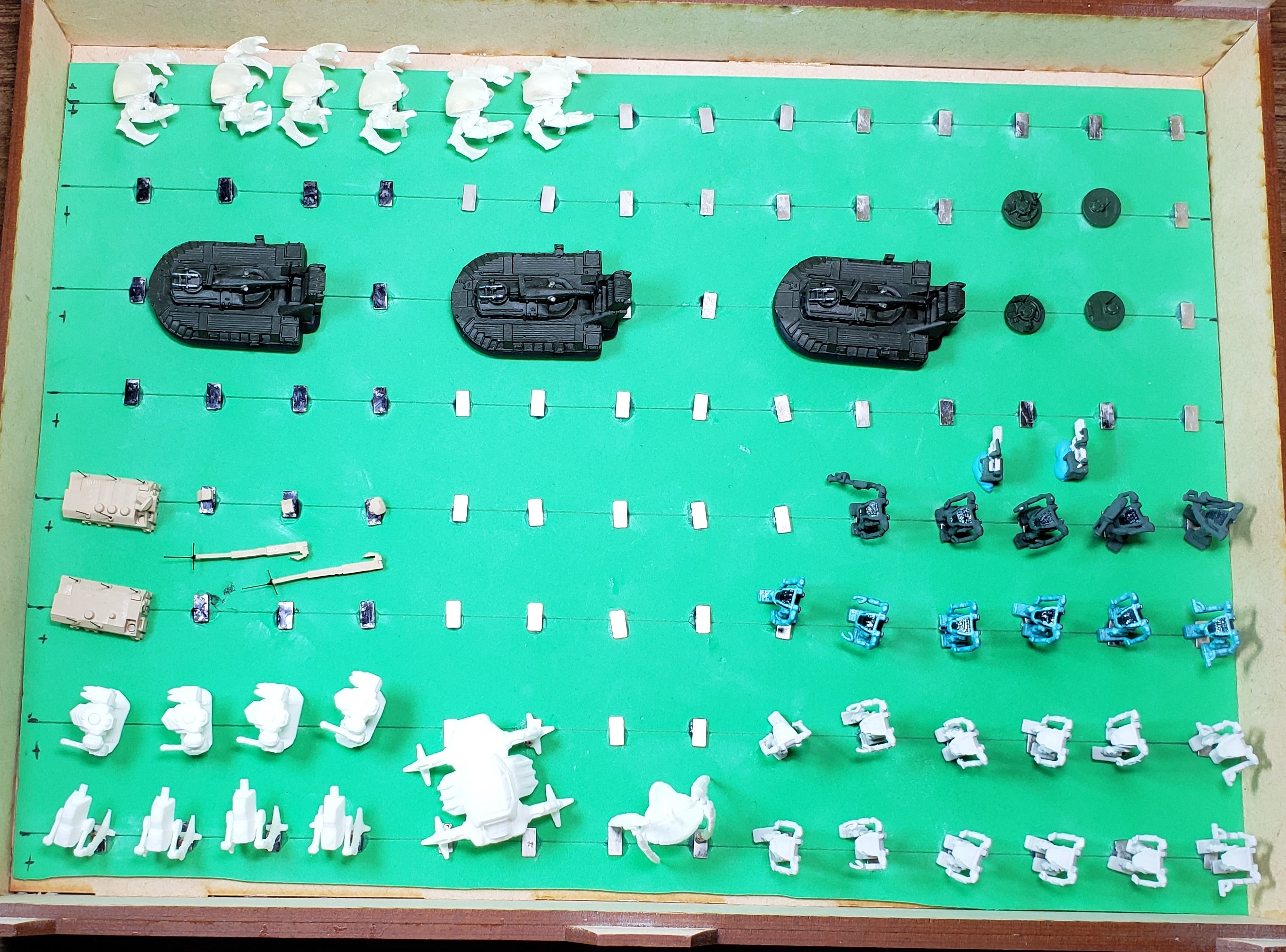 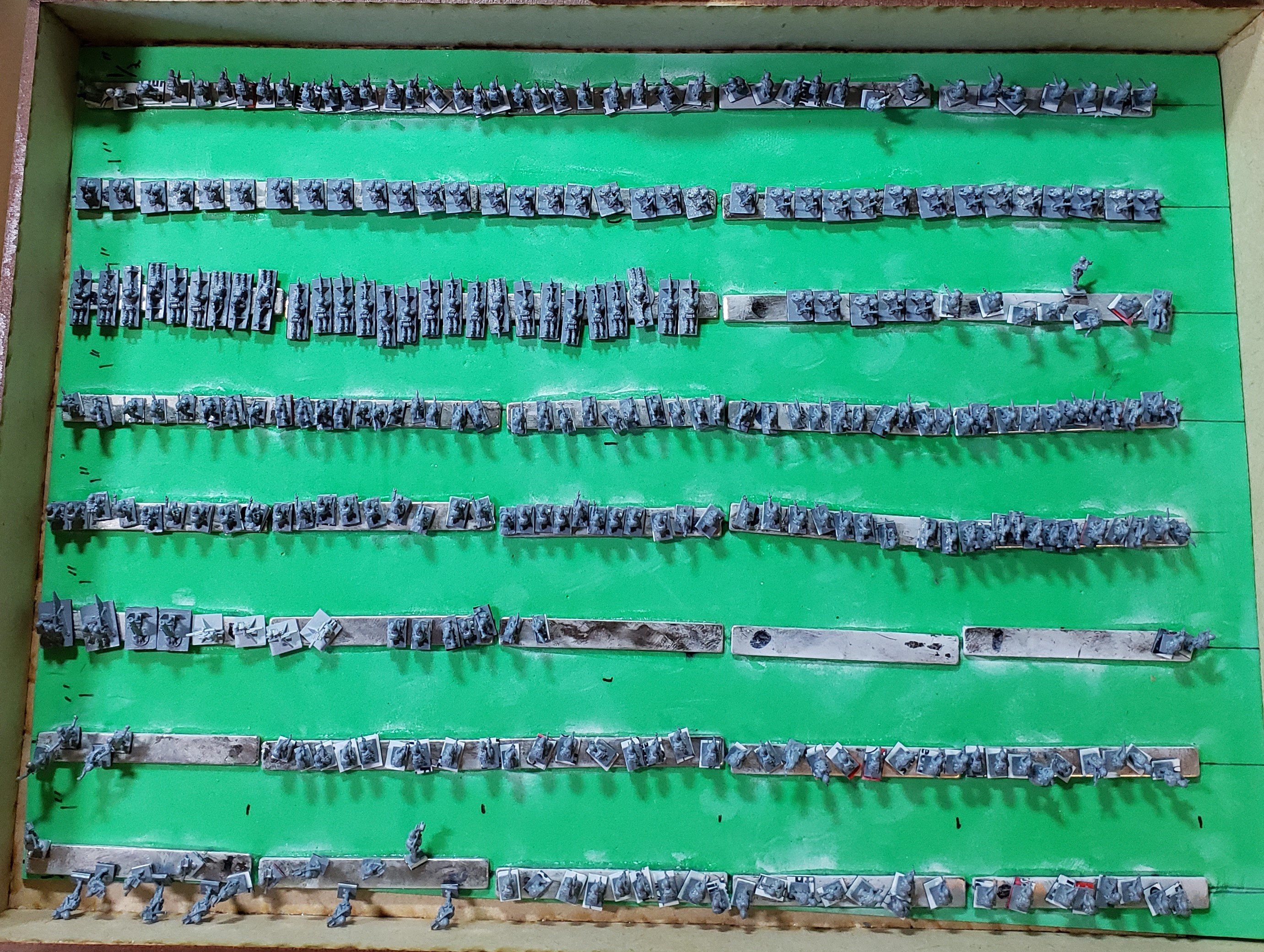 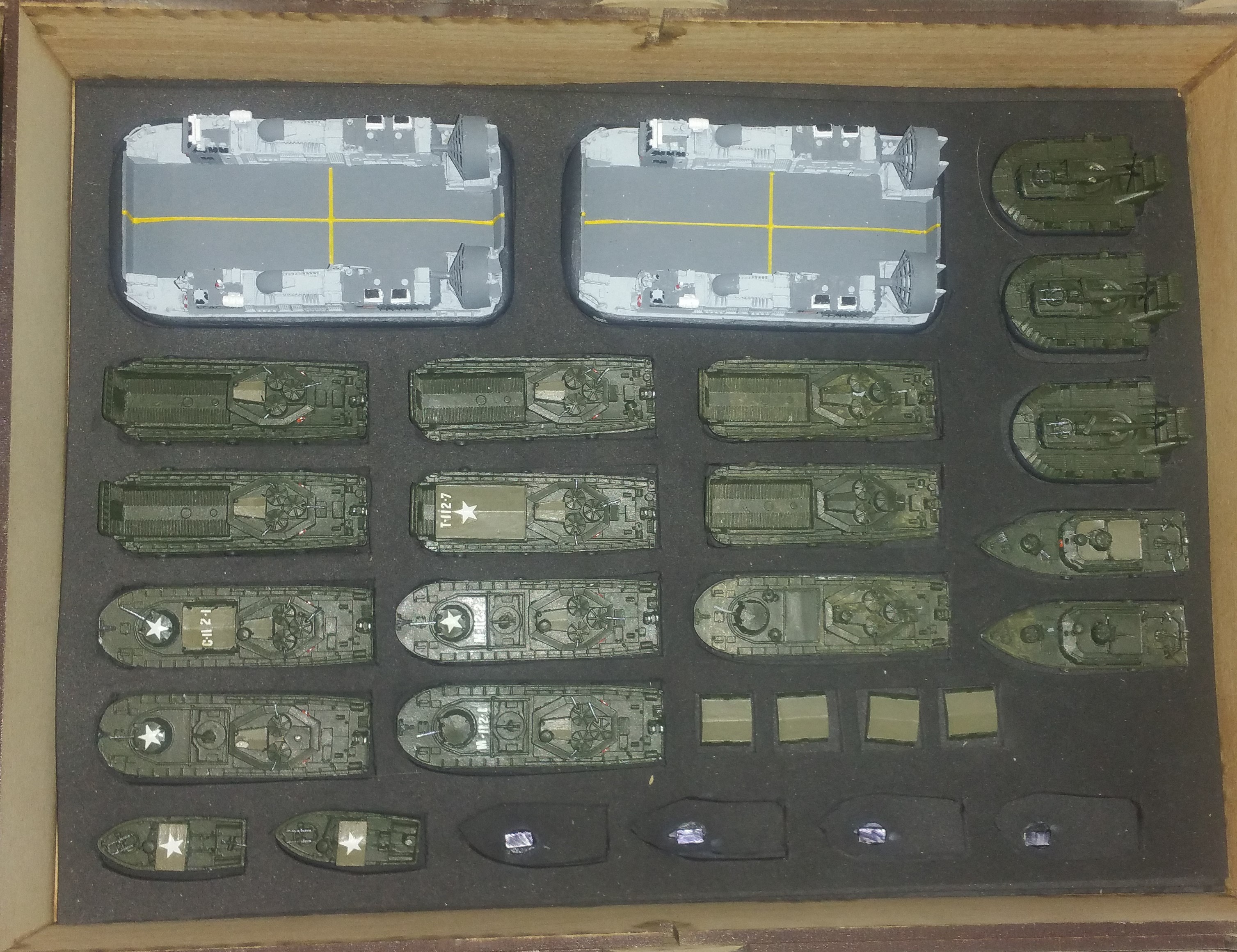 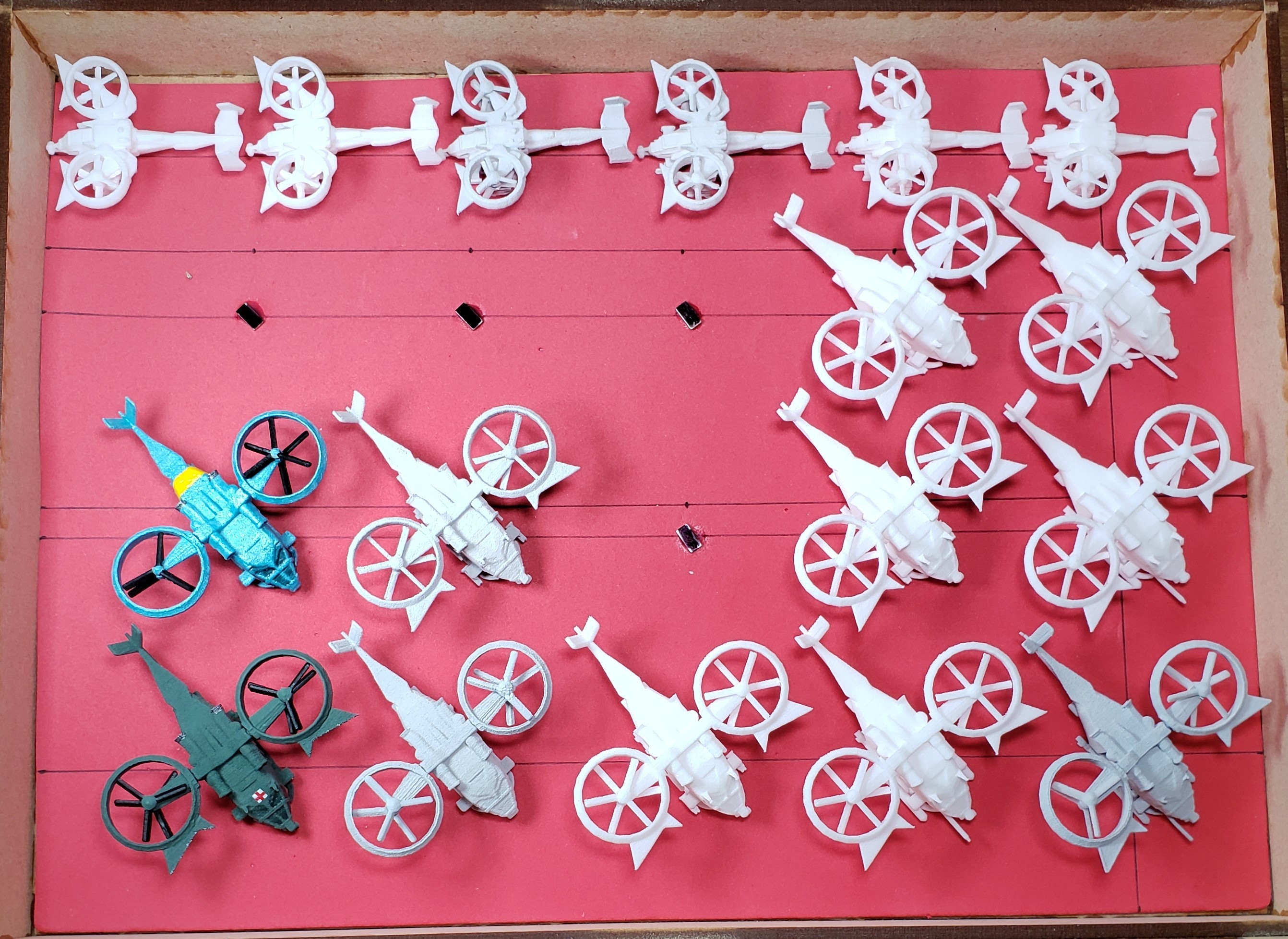 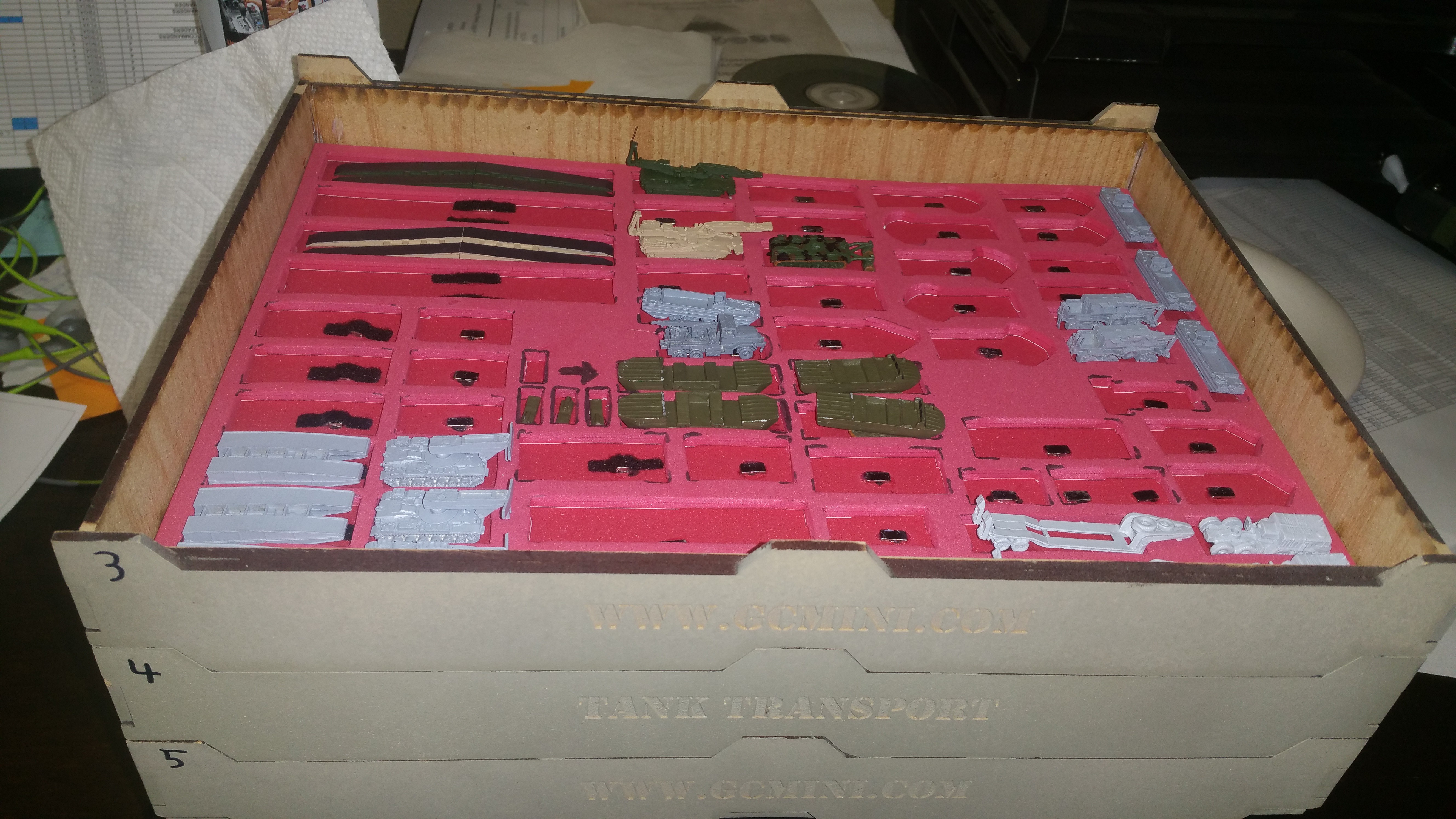 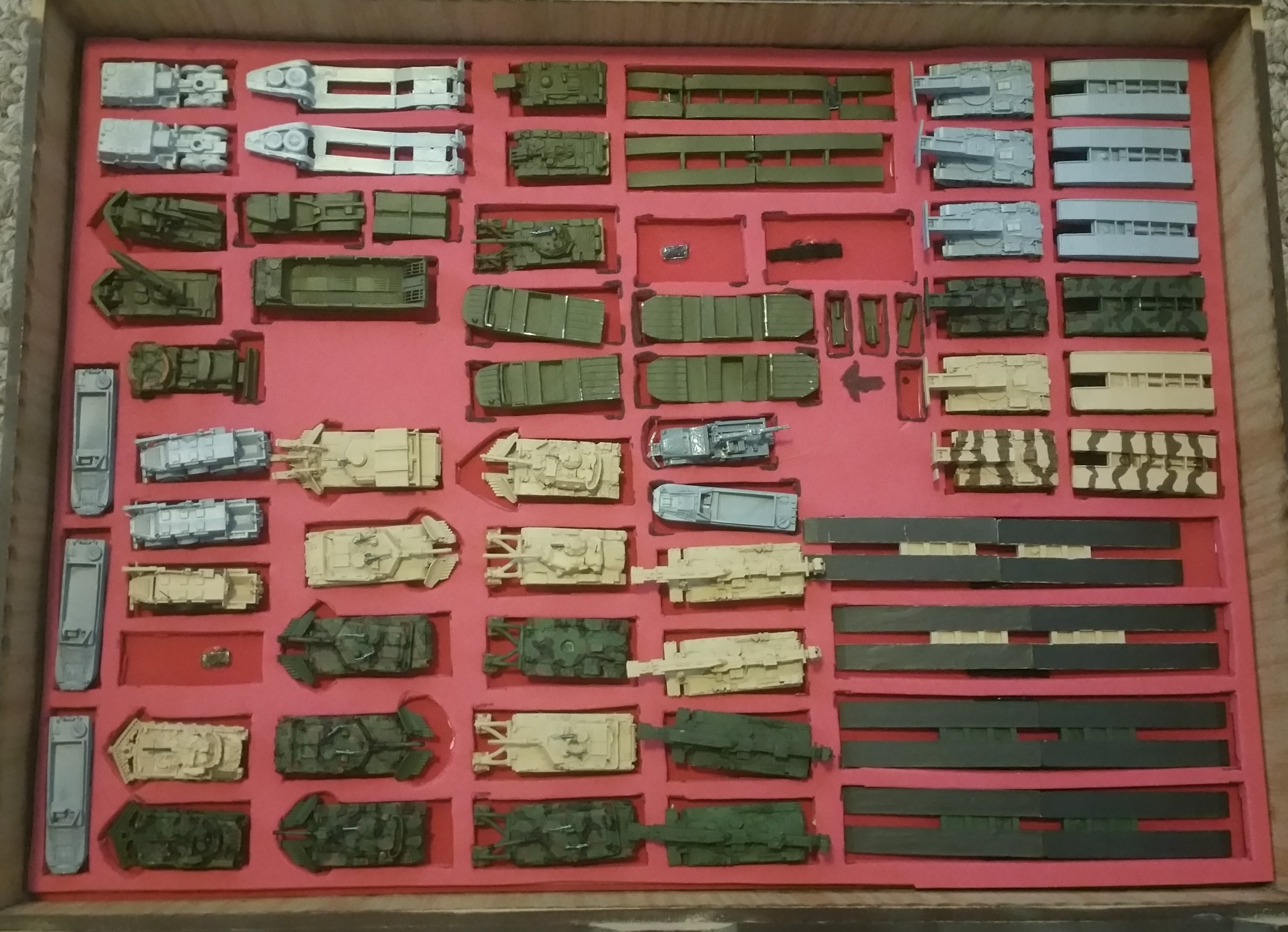 Just thought I would toss a couple of other storage options at you.
MIke
Top

This is PERFECT, thank you Mike! It's easy to store, it looks tough enough, and it will perfectly fit in the boot of my car if needed. It even looks like I can use small ones to carry "travel sized" forces in a plane's luggage.
Top

The trays are called "tank transporters". I don't think I am supposed to post the name of the company but if you can't find them by searching that term short me a private message and I can give it to you. Glad this was helpful.
MIke
Top

I also have some tank transporters and they work great - but magnets are something I never thought about. I will be stealing that idea for sure! Thanks for posting!
Time on the recce is time well spent!
Top

As usual there are many great storage ideas!! I've been using the Plano 4 compartment tackle/storage boxes since 1984. They were cheap and I didn't have many minis. I put strip magnets in the bottom to hold my washer mounted miniatures. As an old veteran without much spare cash I then cut the dividers in half and hot glued them in the ends of the trays. A sacrificial set of blinds cut down to fit as a second story. I glued push pins into the plastic blinds as handles to lift off the second story and access the lower levels. The boxes stack pretty well and travel pretty good in the tackle box holders. Just my two cents!! Thank you gentlemen!
740 SMS Thermonuclear Projection.

Mike Eng, that is great looking. You are welcome to post more pictures, close ups. Massive firepower you have.

I use a room with shelves. There are containers with drawers and Bunker Boxes, tank traps, panzer keepers, etc., on these shelves.
Last edited by chrisswim on Thu May 27, 2021 3:58 pm, edited 1 time in total.
Chris
Top

Mike ENG, you are PROFESSIONAL GRADE.
All blessings flow from a good mission statement.
Pogo was right. So was Ike.
"A Gentleman is a man who is only rude intentionally." (Churchill)
Top

I have been wanting to participate in this thread for a while and just have not had a chance. Lots going on in the Hoth House hold. My choice of storage is Playing card storage boxes. I buy them for about 1.99 on Hobby Lobby's web site. For the ones I had time to work on, I take Bass wood and make dividers for the vehicles to fit into. This keeps them in place when I am storing them around the house. See below. 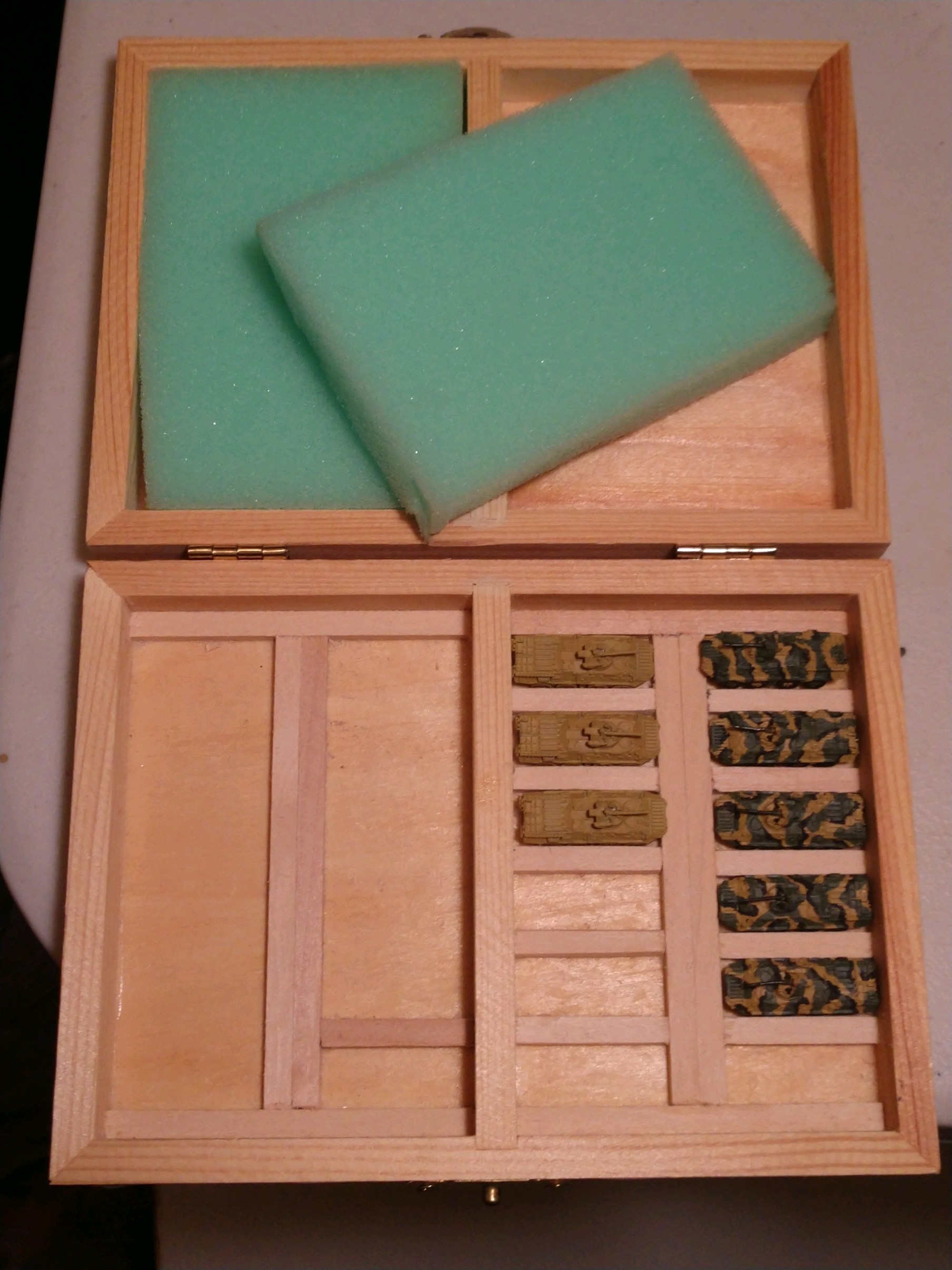 This one is partially complete. As you can see, I cut foam and put it in the voids on the lid. That way it does not have a huge space to move, up and down. The dividers are not very tall so that I can pull the vehicles out of the box. However they do move around if jostled too hard. One day I may try out blocks in the 4 corners to keep them stable. Project for another day. A completed one is found below. 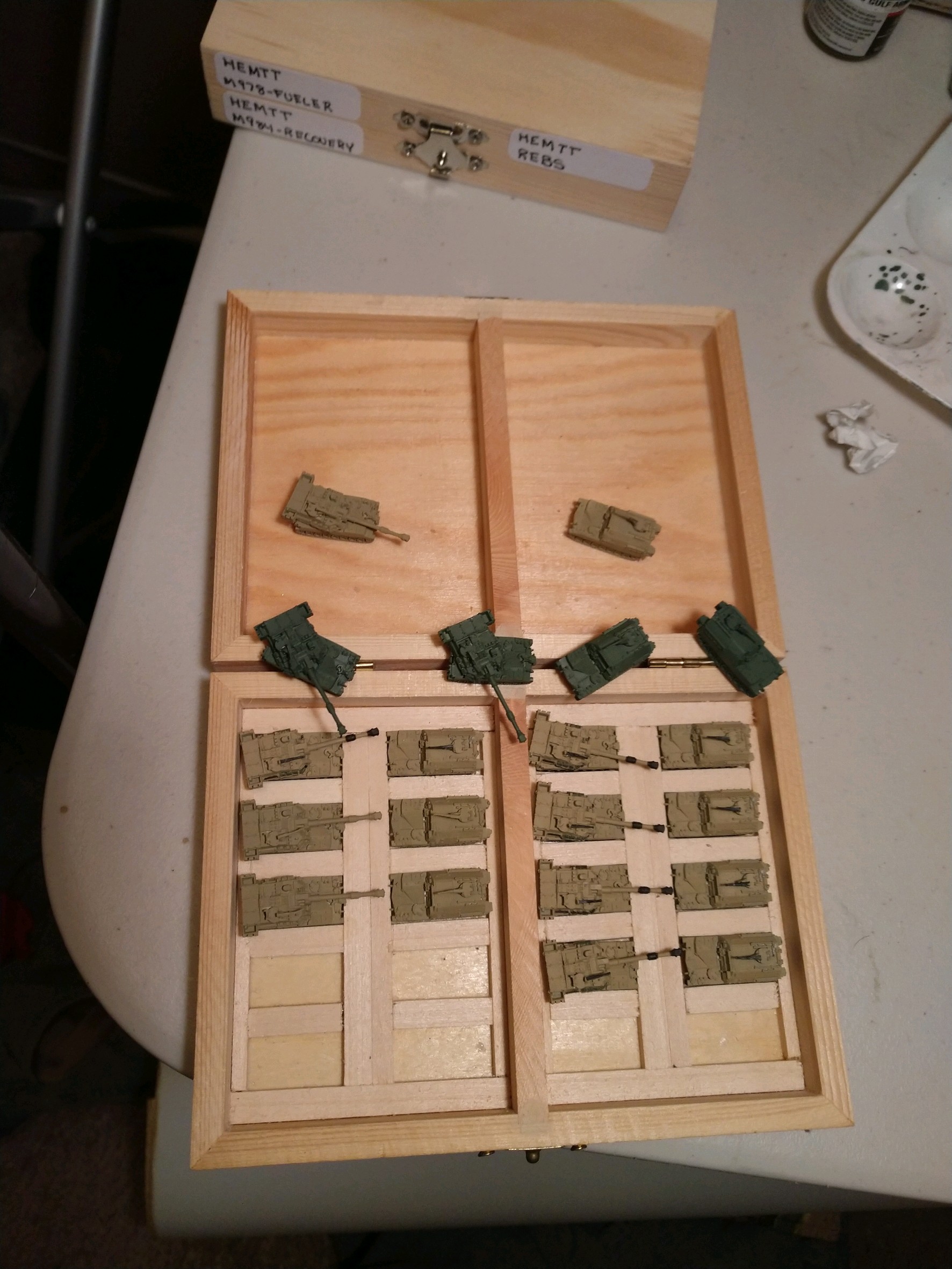 This one is for my M109 Paladins and the Ammunition support vehicles. However, I do not suggest you transport vehicles, with tiny machine guns on top, for anything other than to go to and from games or keep them organized on the shelf. For stuff like this, I use tank transporters From GHQ. I use this to just organize and store the M109s at home and to travel to a local game. Typically, for things like the BMPs.. I fill the voids between the vehicles with the some foam in the lid and then put bubble wrap over the vehicles till its flush with the lid. This keeps them in place. when shipping or in a moving van. If you want a look at that set up, let me know and I can post a picture later. For all the other vehicles that do not have boxes with dividers, I just place them in the box and then fill voids around the vehicles with foam and bubble wrap to go on top of the tanks. Here is that set up. 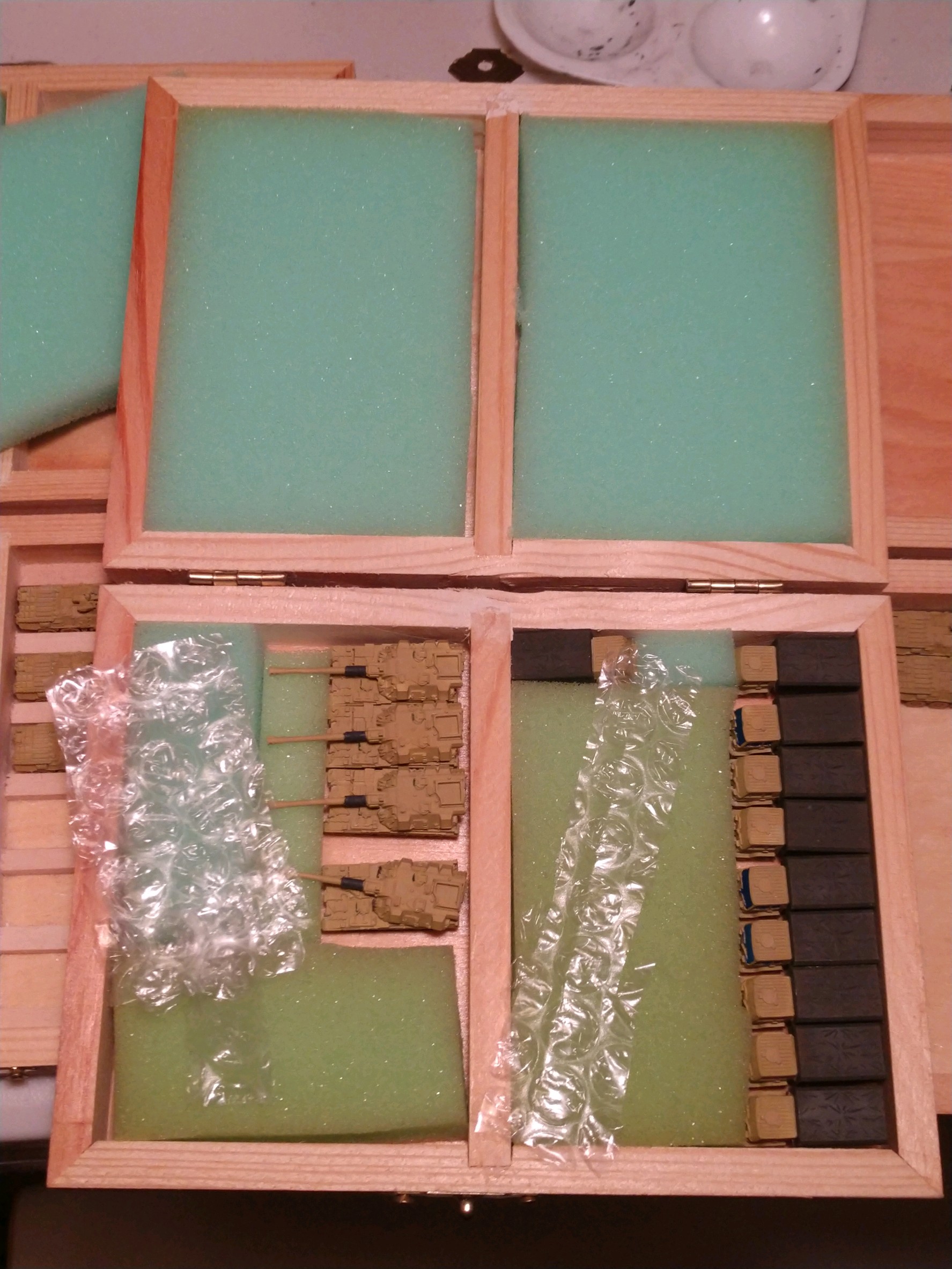 Again, if you are really interested in better pictures or a better explanation, let me know. I can probably do a better tutorial. In the end, with foam installed to protect them from moving around and bubble wrap on top to fill the void to the keep them from moving up and down. Then a rubber band is tied around them to keep the lid from not opening. After that, they are all loaded up into a hard plastic storage tote. I shipped them from Washington, with movers, to Florida.. then back to Washington A year later. No damage to any of the vehicles. Remembering that any vehicle with a tiny machine gun is shipped in a tank transporter from GHQ. The foam inserts with the cutouts worked better for that.
Quantity has a Quality all its own.

I had one thought that has floated around in my head for some time. I have often thought about contacting the maker of tank transporter and see if he would be willing to make his inserts cut to the size of the compartments in the playing card box. That would be less time consuming than cutting the wood and fitting them in place and gluing them. In addition, if he sent two layers of it, I could probably stack them and really secure the vehicles in place. than just pull the top layer off to make it easy to remove the vehicles. I might contact him and ask. Maybe see if he will do a one off and I can see how it works. Maybe another thought would be to see if he could make one for the cover that filled the void and had holes cut for where the tiny machine guns could possibly bump into. Just Spit balling if Allen is Listening.

As a side note, he is very approachable for new product ideas.
Quantity has a Quality all its own.