Mike ENG those tank transporters look like they work well and I like your solution. Plus your collection looks fantastic!! That’s a lot of pewter (and painting)!

Hoth what a great idea! Never thought if modifying things like that. The wood boxes look very convenient and great way to custom build out for those odd sized minis!
Top

The idea came from necessity. I move way too much than I care to say. Most times its from one place to another locally. But a couple years back I had to move to Florida. So I needed something that would protect them in a serious way. All these boxes fit nicely into a plastic storage container. I have some nice ones with locking lids. Which worked great. Not only did it make the trip from Washington to Florida and then back in a year, but I actually watch the person unloading actually drop the container with all of them in there. Once open, everything was perfect. Keep in mind these are vehicles that are painted and not sealed. So the paint does rub off some times when touched to much or when they bang together. The hardest part is finding the right size bass wood to fit them all in there and leave room to grab the pieces with your fingers... I am rambling... ugh.
Quantity has a Quality all its own.

I base all my minis in thin steel bases. This allows me to use sheet magnet in my storage boxes, which are just cardboard boxes, measuring 12 x 18" that come in a variety of depths. 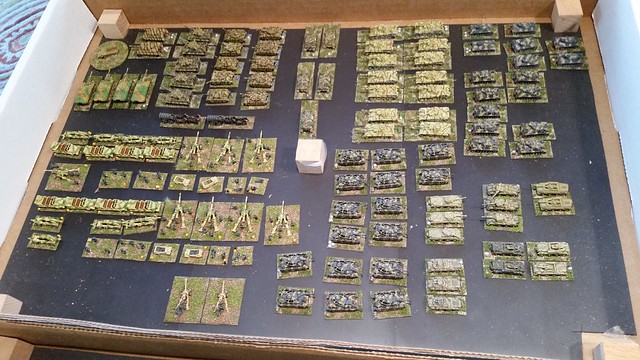 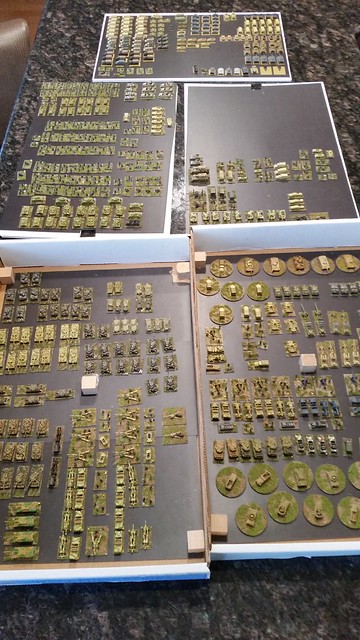 More detail than any sane man would want here:

Hole smokes Mark! How big is your collection? The pics on your website look like the shelves of a hobby store! Very cool! And a great way to store all your gear!
Time on the recce is time well spent!
Top

Great job Marc. And yes he does own a hobby store!
Top

My collection is roughly 20,000 painted figures, counting 4-man strips of 6mm as one figure. About 1700 of them are WW2 and maybe 500 for Team Yankee/Cold War (though that is growing rapidly).

If you're insanely curious I did an inventory just before Covid:

That's a hell of a collection Mark!
Time on the recce is time well spent!
Top

My wife was looking for a job and we were 99% sure we'd end up in Riverside - then you'd have been able to see it up close. But as things turned out we're staying put.
Mark Severin
Owner, Scale Creep Miniatures
Author DeepFriedHappyMice.com
Top

My wife doesn't know it, but she is happy that you didn't end up in Riverside because she would get really tired of "Honey, I'm going over to Mark's house to play!"
Time on the recce is time well spent!
Top

That is a helluva collection Crispy, pretty envious! How are your eyeballs after painting all of them haha?!
Glad you’re back here posting again!
Top

My eyeballs are fine, thanks. With an assist from reading glasses.
Mark Severin
Owner, Scale Creep Miniatures
Author DeepFriedHappyMice.com
Top

I've finally got around to taking a few photos of my main storage system. All 4 of my late WW2 armies (American, British, Soviet, and German) use it with 1 toolbox each (except the German that have two). Each of the 4 upper trays can hold stacks of up to 3 units. The bottom of the toolbox can accomodate stacks of up to 5 (IIRC). 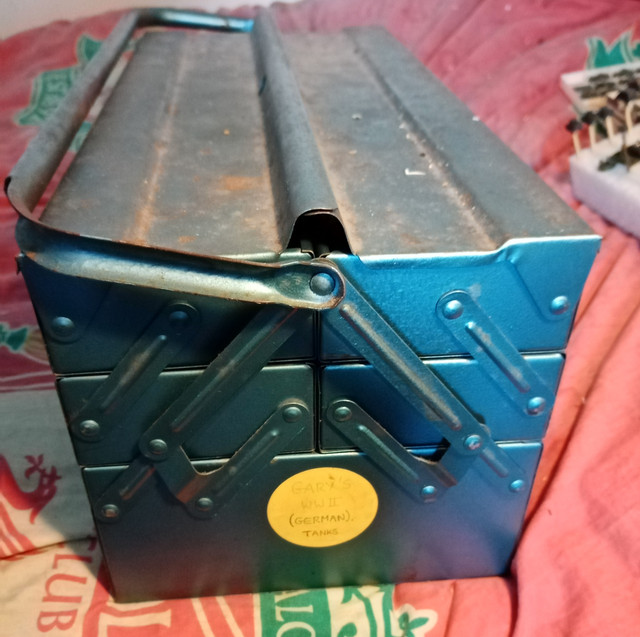 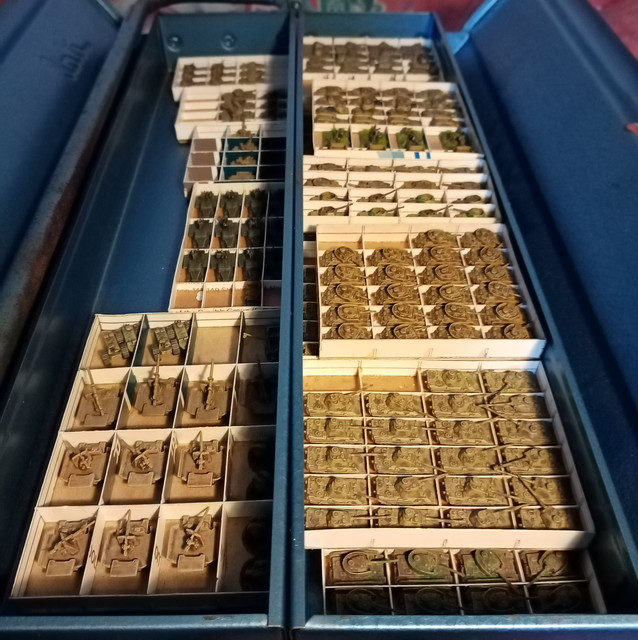 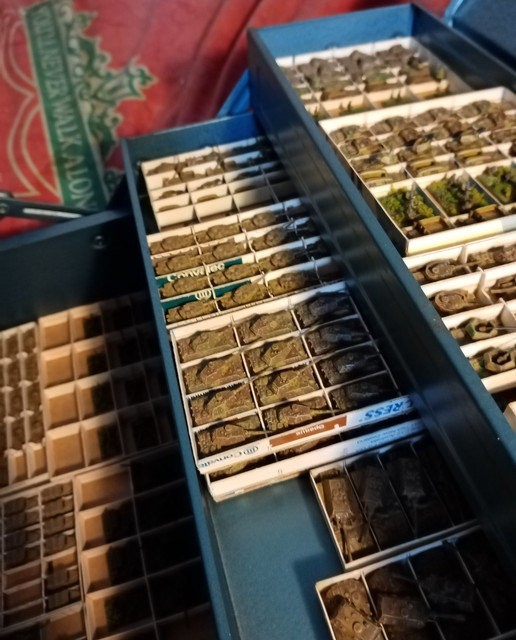 Left tray - out of focus artillery 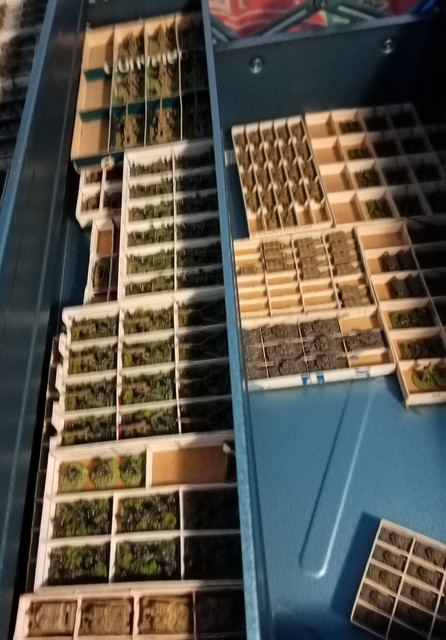 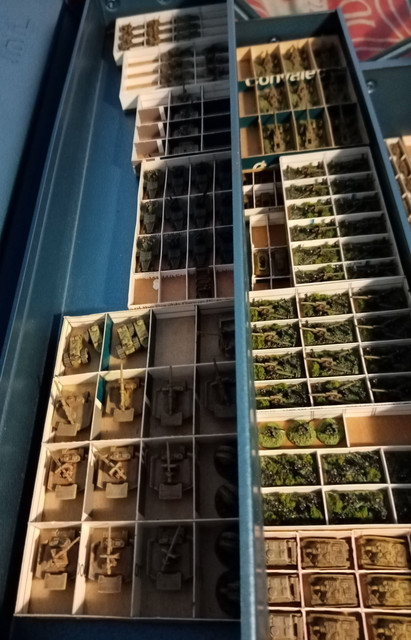 The misc AA again (from the other end though) 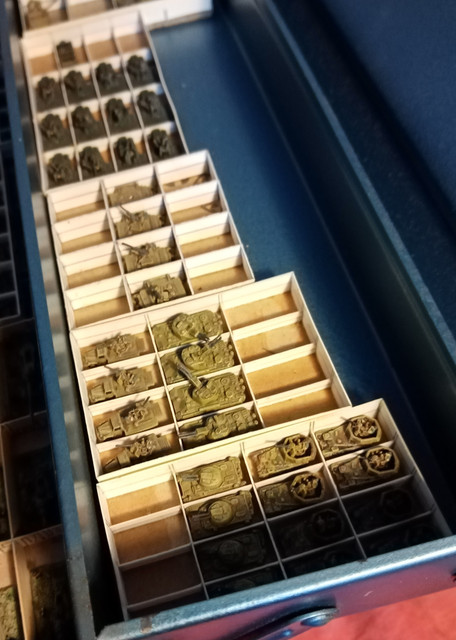 Artillery tray from the other end - again not exactly in focus

Also some bits and bobs in the bottom of the toolbox. 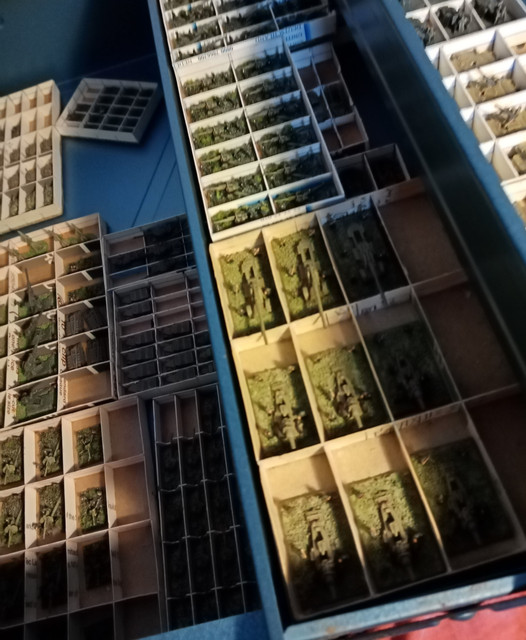 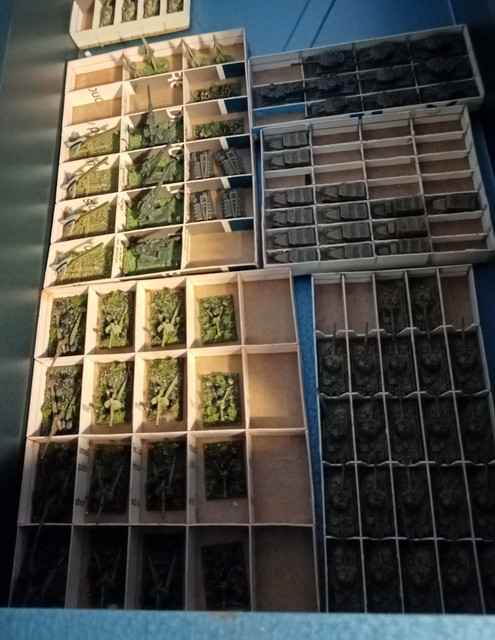 Close up of the heavies - from the other end. 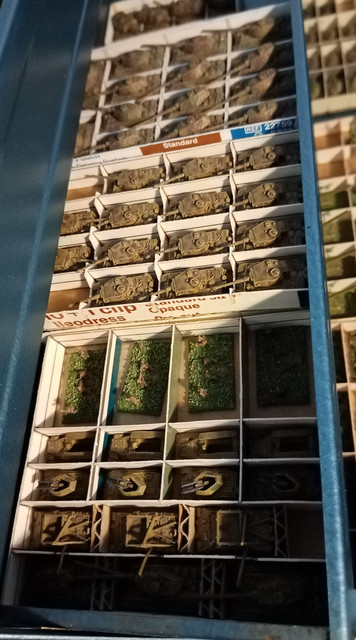 Close up of the Panther and StuG IIIG BHQs 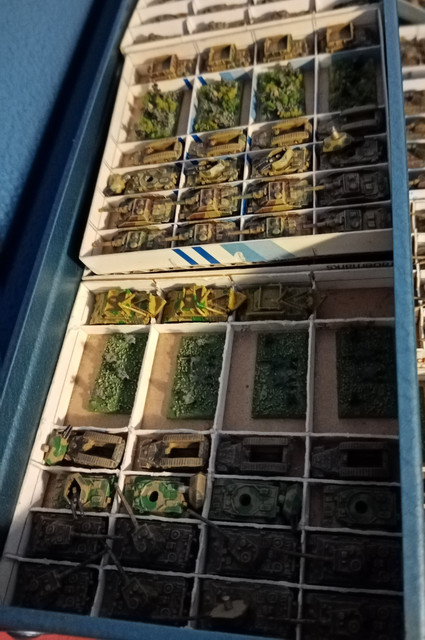 In the other box.

German Box #2
Each pair of photos is the same compartment taken from opposite ends. 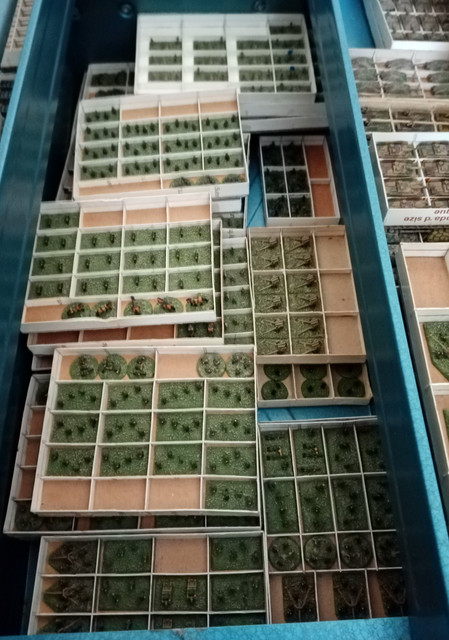 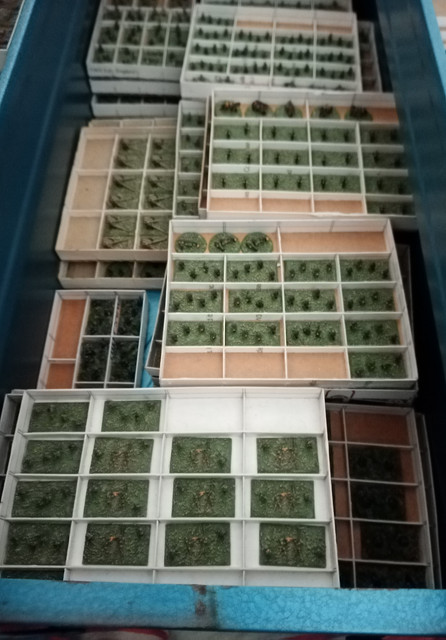 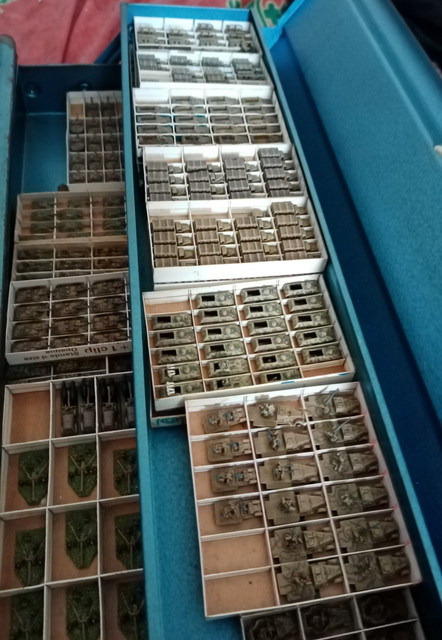 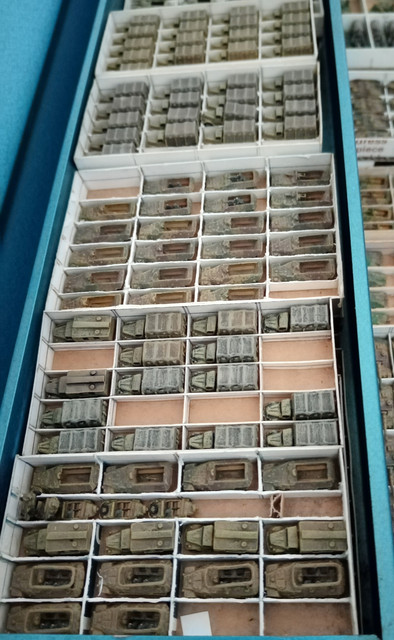 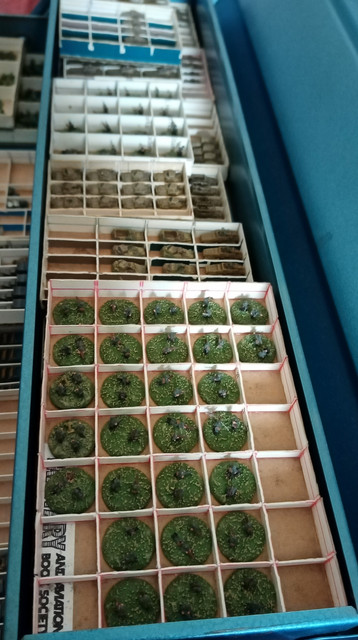 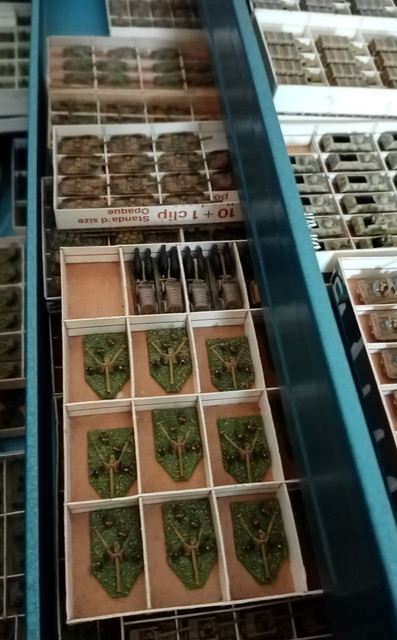 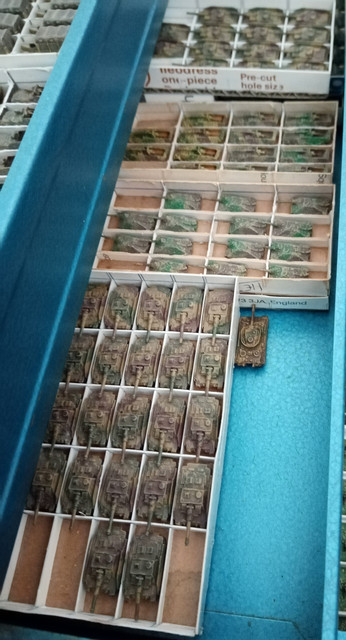 Misc. (including the obligatory blurry photo ) 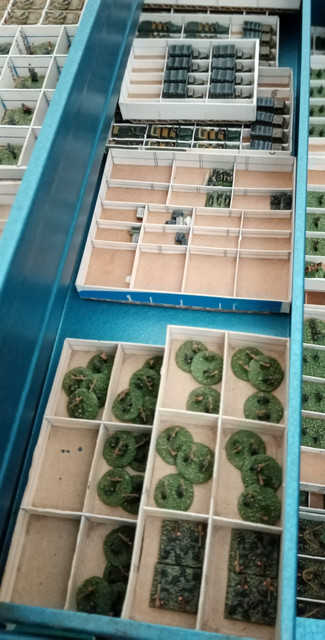