At one point, I was considering self-adhesive labels on the bottom of the bases. A few examples.

I was over at the club today and took a few photos. Firstly the cabinet were a few of the micro armies are stored. 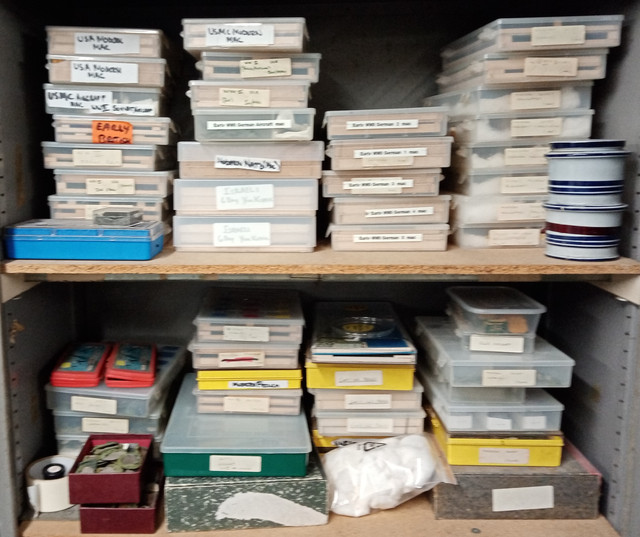 And the former type face unit that I keep my aircraft in. 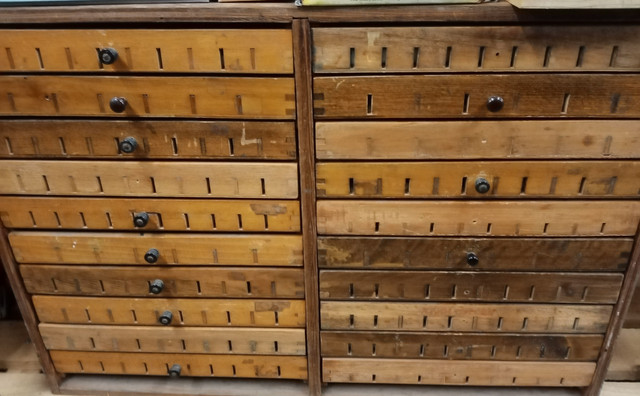 The first drawer is a bit of a mixed bag. P-38 Lightnings, Martin Baker MB5s, and Jordanian Hunters to name three. 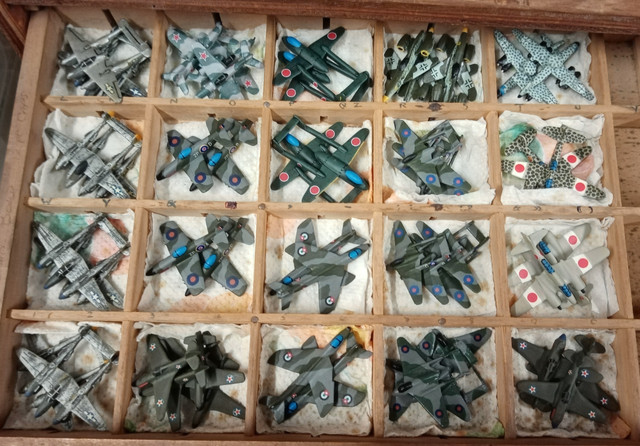 Another bunch of random aircraft (I really should sort them out). Bf 109s, Me 262s, Fairey Fireflies... 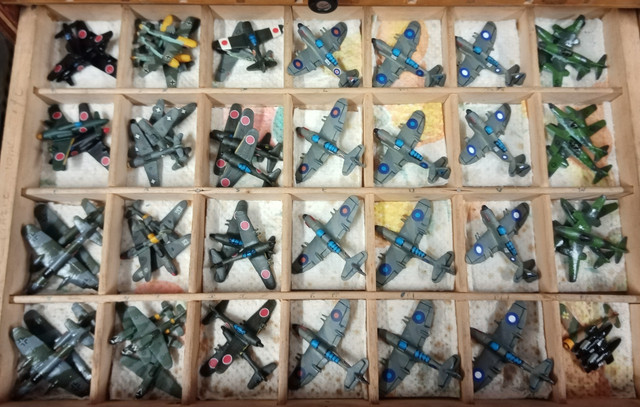 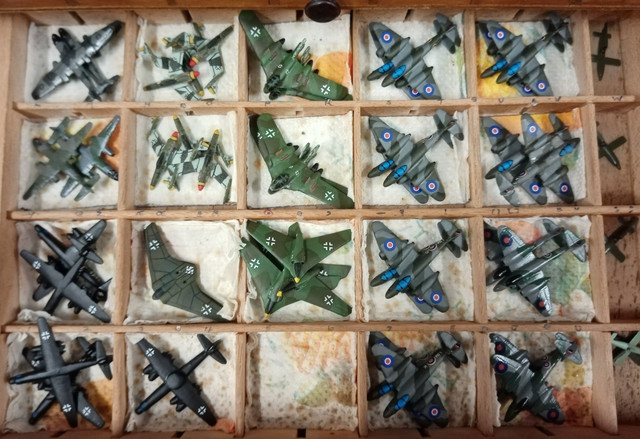 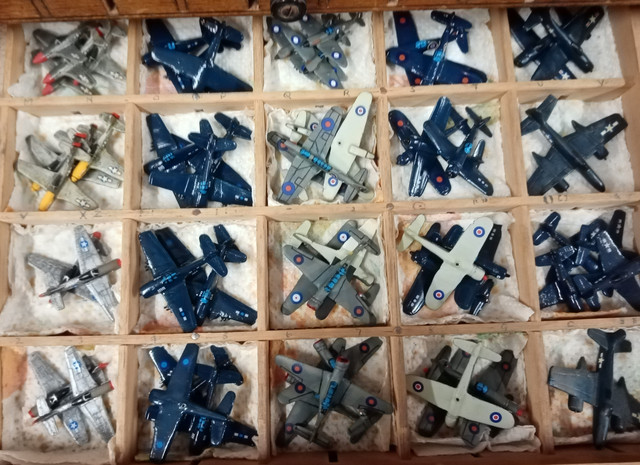 Random aircraft that I really DO need to sort out. 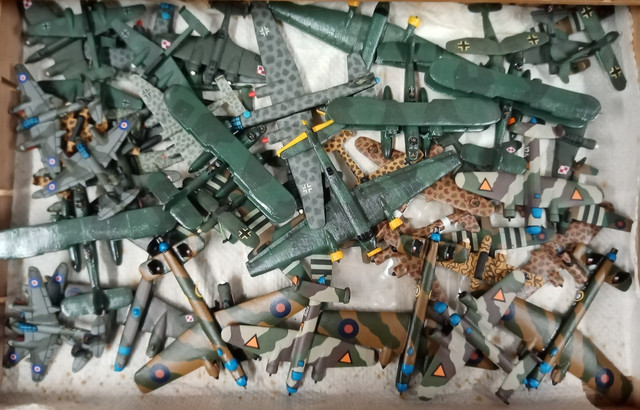 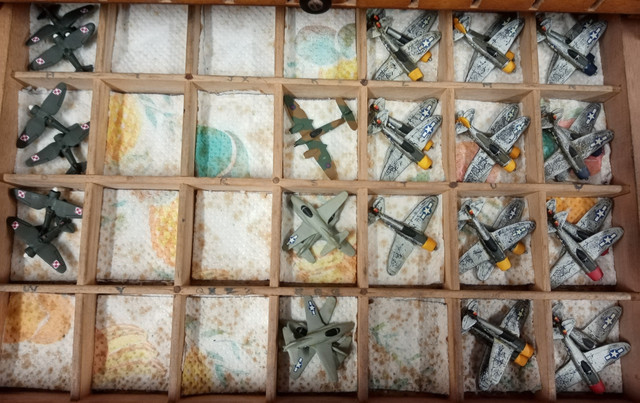 A mix of Eastern Front allies and Italian aircraft along with a few Ta183s. 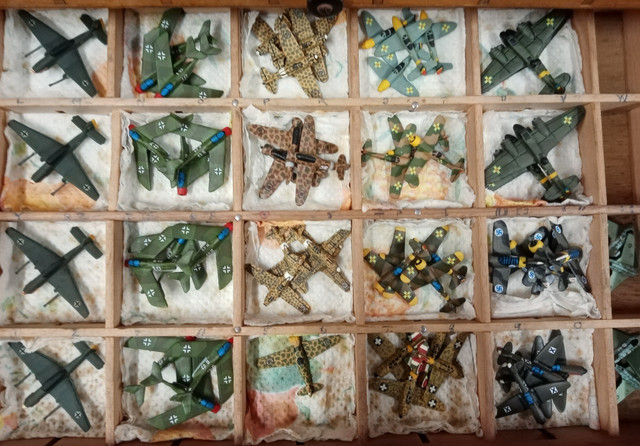 Mostly early war with a few He 162s and Lippisch P.13s 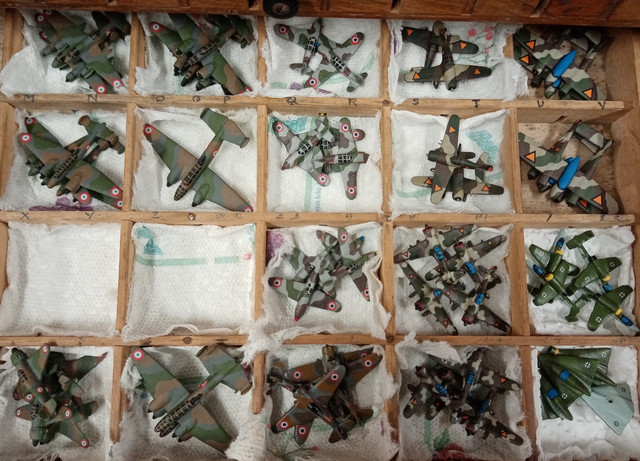 More USN aircraft - not mine, although I did paint them. 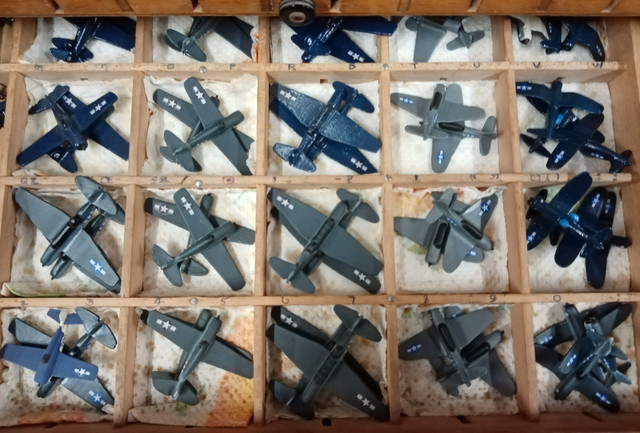 FAA Barracudas and Avengers, along with some Dorniers, Henschel 129s and others. 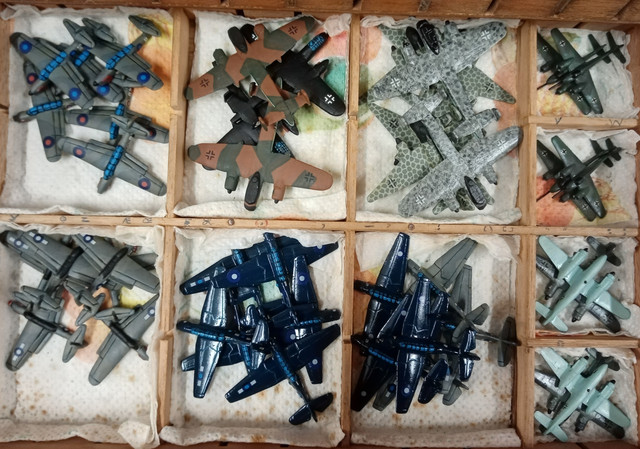 Mostly WW2 RAF - although they're not mine and (for a change) I didn't paint them. 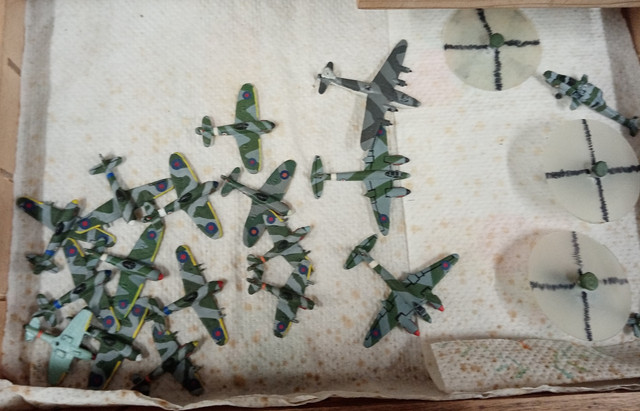 Back to my stuff. Fairey Battles, Hampdens, Mossies... 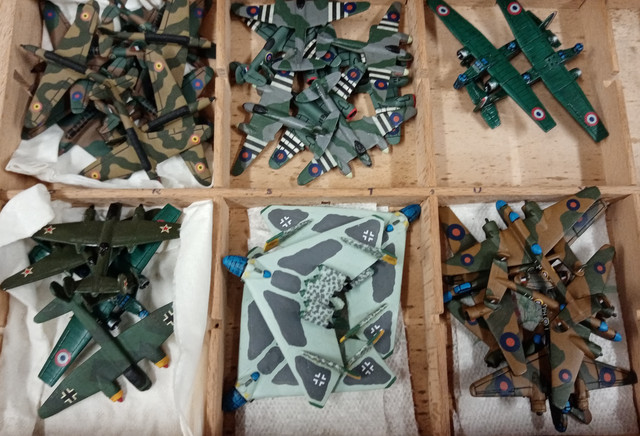 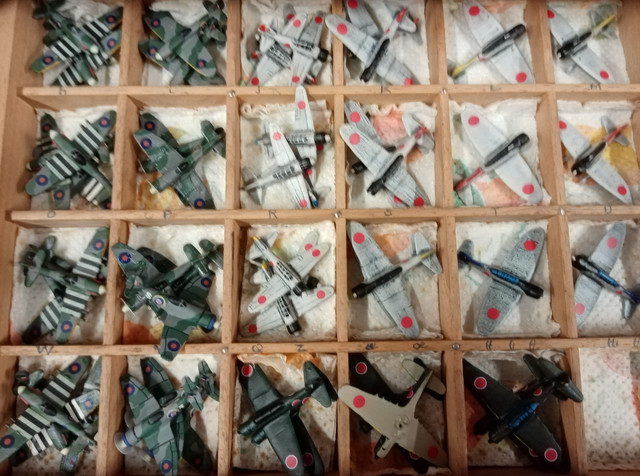 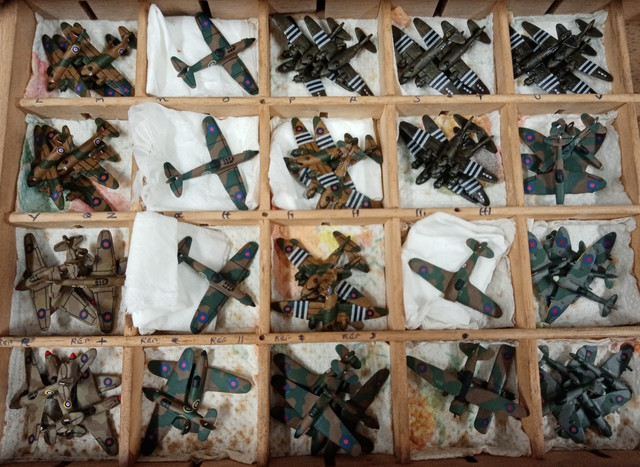 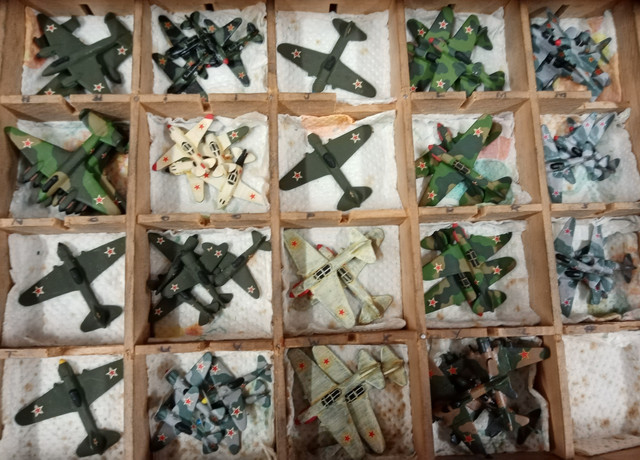 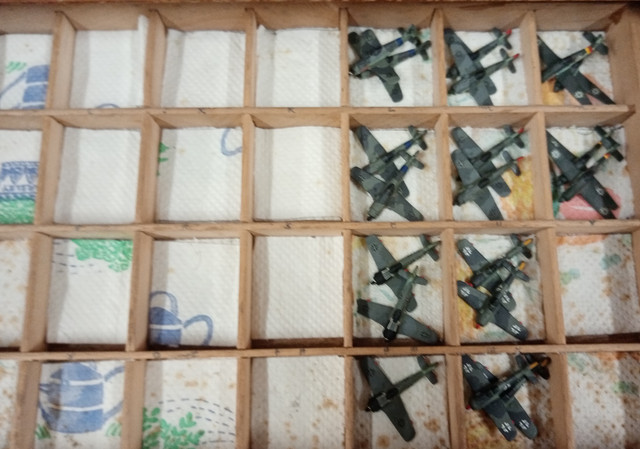 More British stuff that's neither mine or painted by me. 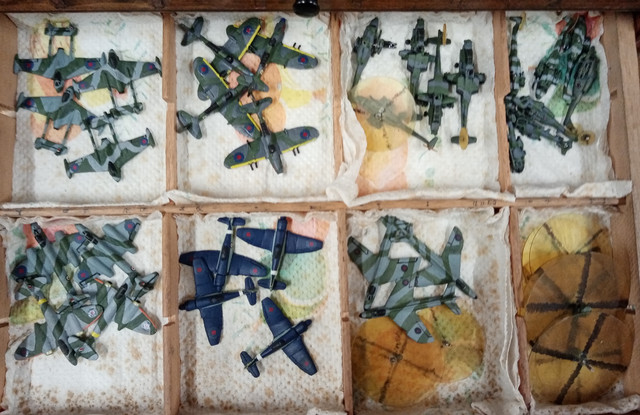 And another drawer of the same. 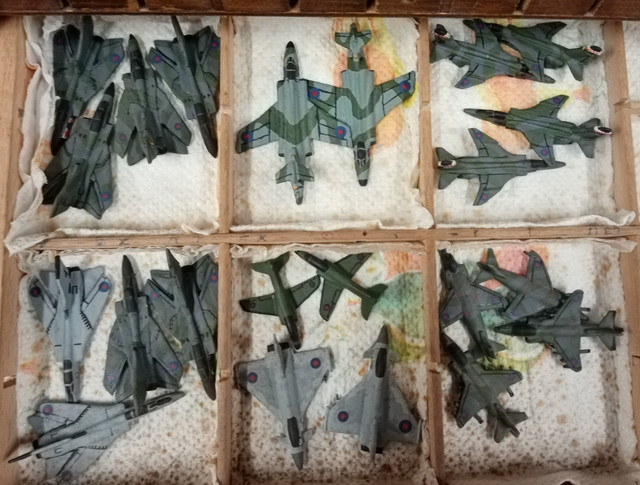 My medium USAAF bombers and observation aircraft. The B-17s aren't mine (and not one of my paint jobs either). 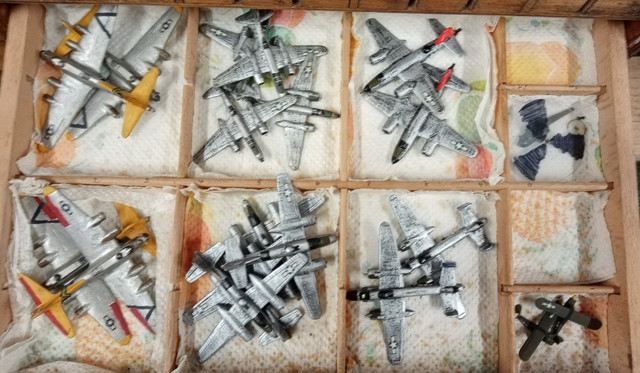 Finally, some WW1 types that again aren't mine (or painted by me). 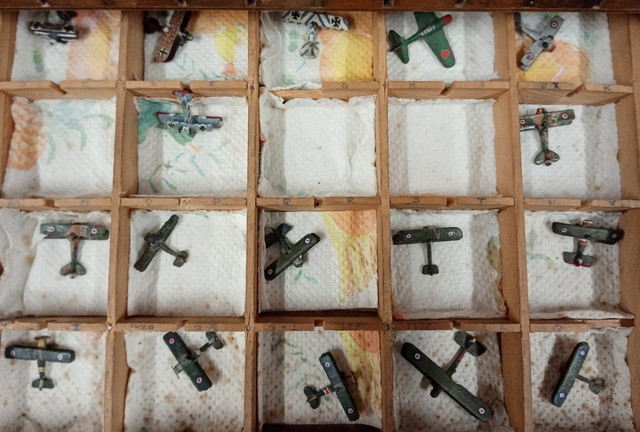 Those drawers are awesome, they almost look like they come from a school/university? That’s a serious aircraft collection!
Top

Beagle wrote: ↑
Sun Sep 19, 2021 7:17 pm
Those drawers are awesome, they almost look like they come from a school/university?

I believe they came from a printers / print shop that was closing down and were used to hold lead type.

I kinda thought that for a minute too, but then I figured they looked a little more geology department, lol.
Top

What an awesome collection! Hose pics were great. My favorite is the random drawer - looks like one of those big heaps of WW2 aircraft at the end of the war.
Top

That's so awesome! SO do you just keep your entire collection at the club, or do you have some stuff at home and some there? I've never been part of a club with permanent storage areas before, I always just brought my stuff over for a game.
Time on the recce is time well spent!
Top

Pretty much, it's the only place it gets used so it makes sense.

I do have some stuff at home but it's either stuff that I haven't finished or old stuff that I felt needed redoing. For example, as you can see in some of the photos, I've recently started painting the aircraft canopies in a light blue - in the past I used black. So over the next ? months I'll be redoing them in blue.

It's very handy, but can be expensive as it obviously costs more for permanent premises rather than booking a hall for one night a week (for example).
Top