Stuff GHQ DOES NOT make

Those are awesome Mick! Definitely good enough for me and my eyesight! Well done!
Time on the recce is time well spent!
Top

Got my ersatz M10s today. They look fine to me. Here's a photo witha GHQ IS-III for scale. I must admit that I didn't think I'd see these in metal. 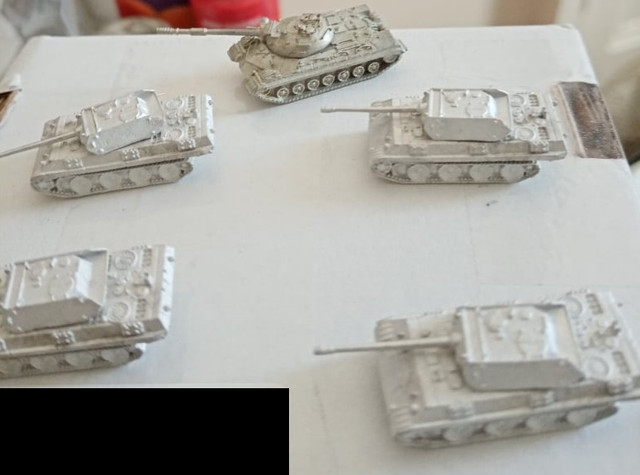 I picked a few last year. They are nice like their Panthers but detail is more like what GHQ made in the 1980.
Still they paint up nice and works.
I believe 3D printed then molded and cast in pewter.
Some of the other mini
https://www.amazon.com/photos/shared/NP ... ZtEX4LI2DV
Top

Those look nice!
Time on the recce is time well spent!
Top

Hate to nitpick, but that's a T-10M, not an IS-III.
Those who beat their swords into plowshares will plow for those who don't.
Top

...or don't yet. Sometimes you just need the model now regardless of quality. Although that said, I do need some M52 SPGs for my Jordanians and the only manufacturer that I know that does them is Irregular Miniatures (another UK-based company) and I don't like their sculpts.
[/quote]

Mate, have a look on Thingiverse for fellow by the name of Daritus. He does some outstanding 6mm post-45 vehicles, many of which GHQ do not make. He DOES do an M52 and other esoteric AFV's. The inimitable Bob Mackenie also has a presence on that platform. The site is a treasure trove.
Find someone with a resin 3D printer who's willing to do it up for you. I can guarantee it will be cheaper than the outrageous rates from Shapeways and probably better quality.
3D printing is an excellent medium for obtaining things not yet produced by companies like GHQ, but the material IS a tad delicate.
I don't think they are true competition for GHQ as yet due to this fragility. The prints aren't "wargame-tough", but given the progress that has been made in the last few years, I would imagine GHQ et al might be getting somewhat concerned. I certainly hope they're giving some serious thought as to how to remain competitive.
I myself have 2K+ of their miniatures and will continue to buy them, but 3D printed figures are certainly good for stuff that's not availabe as yet.
No Coffee, No Workee
Top

Nitpick away! It's a bit modern for me.

It was a present (along with a bunch of other GHQ & Shapeways models over the years) from Fred Oliver - a US-based microarmor collector.
Top

Those ersatz M10s look cool - might have to get some although I’m trying to avoid doing winter armies as it’s more I would have to buy.
Top

Yea, I just received my order that I had commissioned for 200 M1a2 with trophy system.
I had plan to replace the turrets in my GHQ M1 tanks but probably just add them to my inventory.
Last edited by nashorn88 on Fri Sep 24, 2021 9:18 am, edited 2 times in total.
Top

Downloaded that as well as his M44 (Jordanian Corps asset).

Find someone with a resin 3D printer who's willing to do it up for you.

Found someone - just need to get a quote from him.

I could be teetering at the start of a slippery slope to all sorts of esoteric stuff.

Go to yeggi.com, search for "for microarmor", microarmor, micro armor, 1/285, 6mm. Be careful. Some of it is 1/300. LOTS of stuff GHQ does not make. I recommend resin printing. That does more, faster.

Yeggi will show you Thingiverse stuff, too, although I go to both sites to find the most stuff. Different search parameters yield different results. "Tank," "helicopter," "APC," "IFV," "artillery,".... you get the picture.
All blessings flow from a good mission statement.
Pogo was right. So was Ike.
"A Gentleman is a man who is only rude intentionally." (Churchill)
Top

Here are a few items from my forces that are not offered by GHQ... 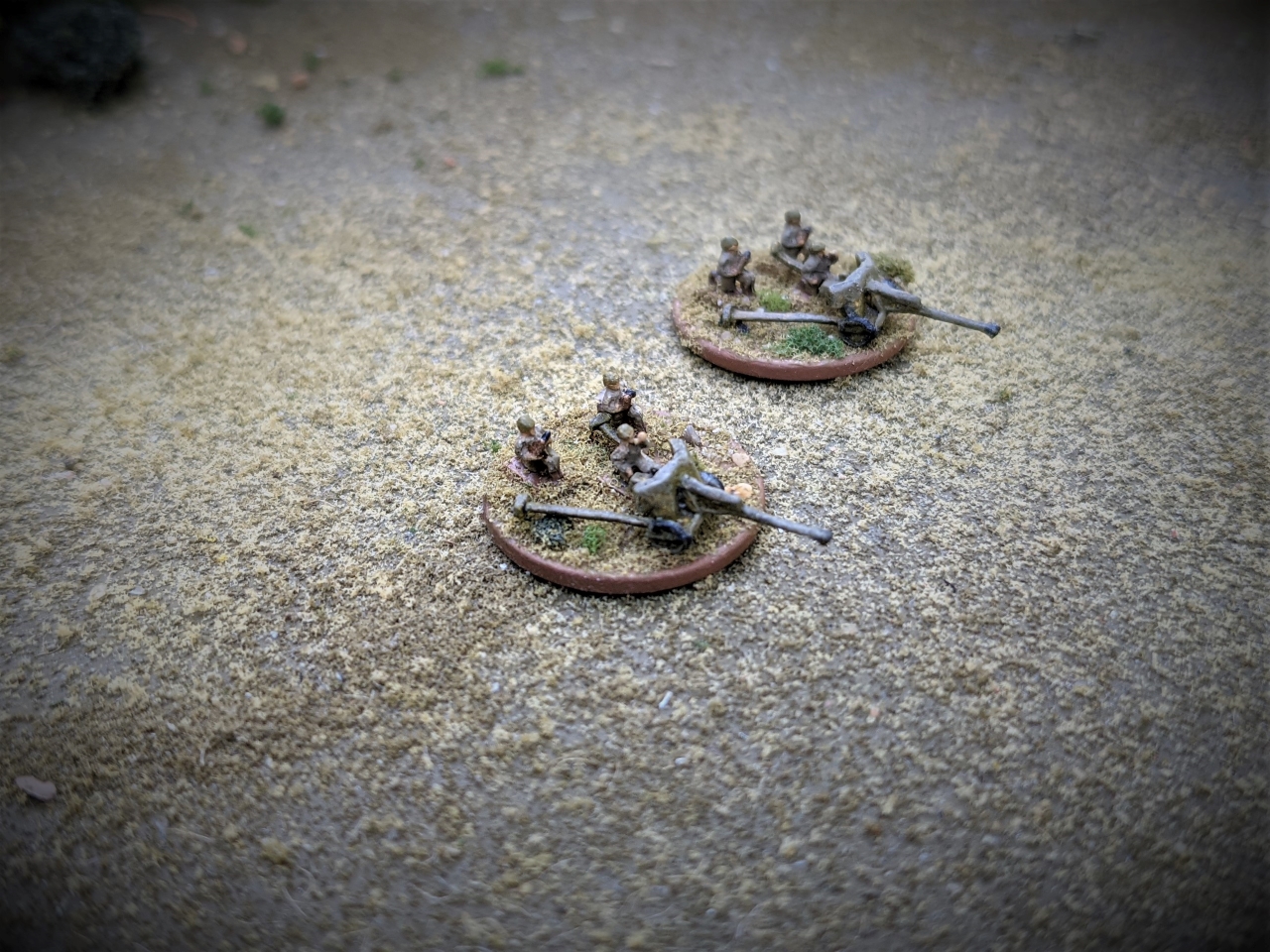 My Romanian force has GHQ infantry, armor and transports. But alas there are no late-war Romanian AT guns, so I have acquired some Romanian M43 Resita 75mm AT guns from another vendor. This gun gives my force at least some measure of defense against Soviet armor in the first half of 1944, and German armor in second half of 1944 and 1945. 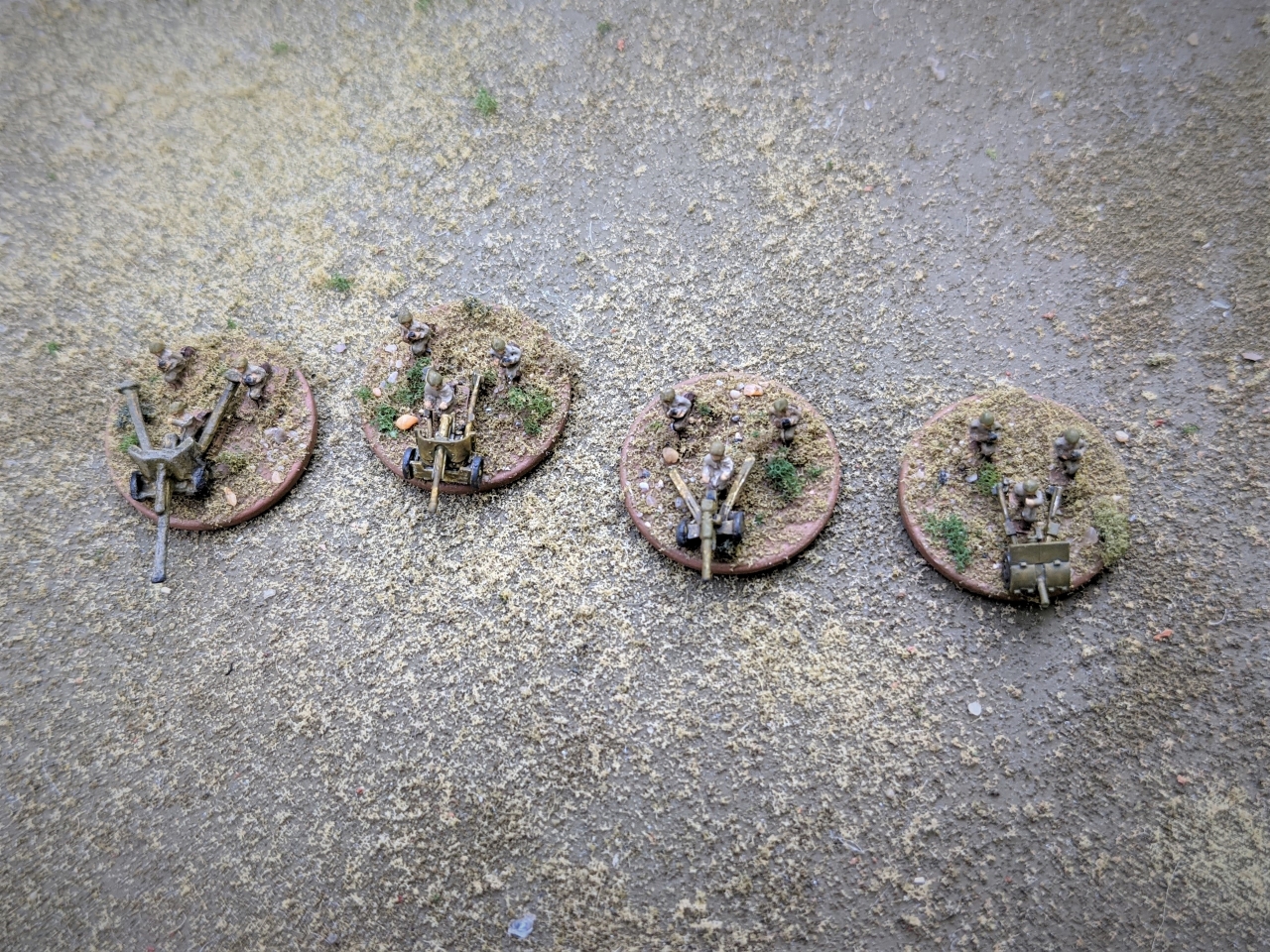 I have built up only 4 AT gun crew bases, and I keep the guns loose, so I can have a battery of 4 (or 2 batteries of 2) for any particular scenario which might involve my Romanian forces. 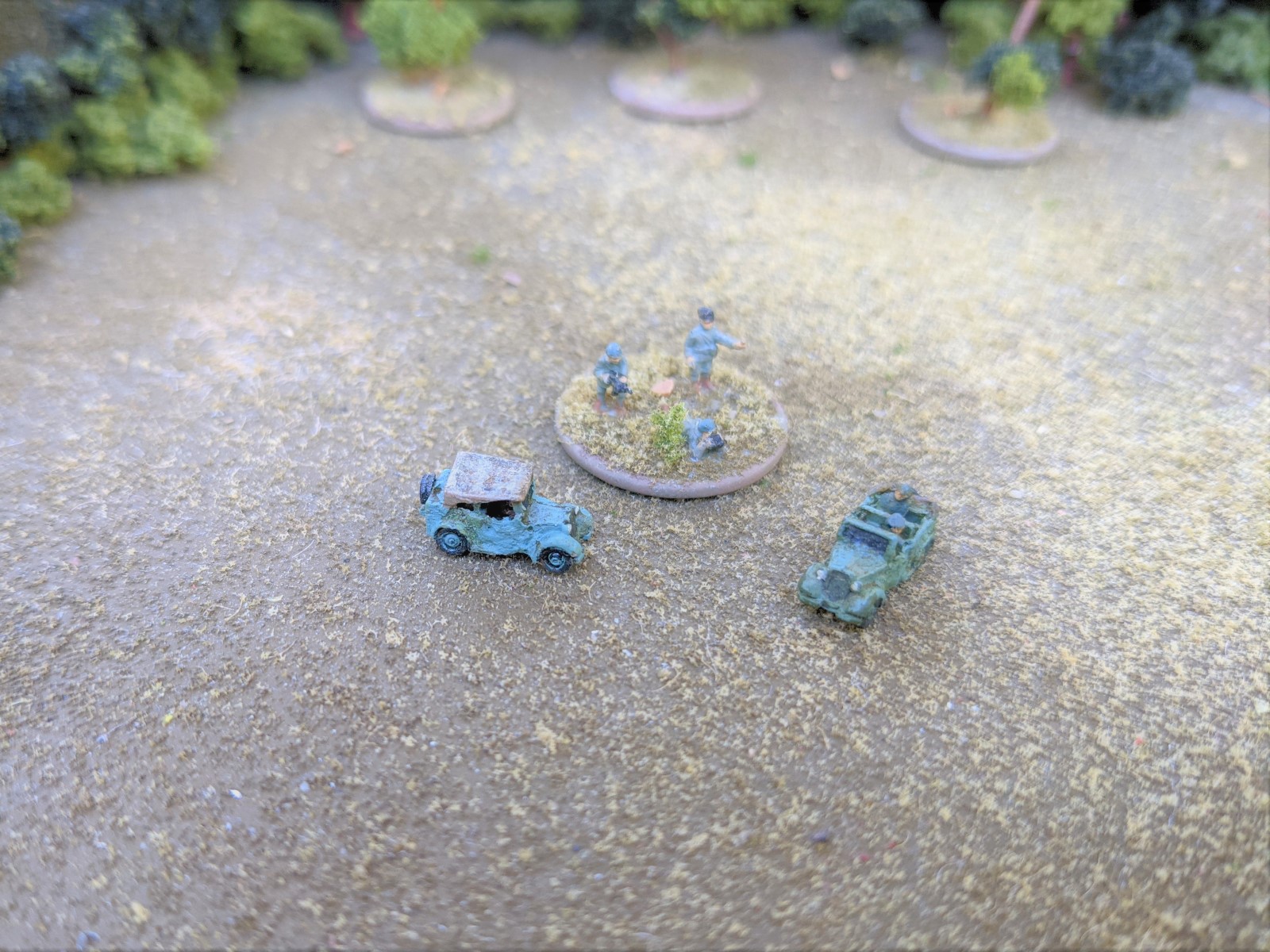 These are my Italian Fiat CM 508 Torpedo field cars (more or less the Italian counterpart to the German Kubelwagon). These are actually made by GHQ, but not as you see them here.

They are offered in the Polish line as the PZInz302, as part of the kit with the 37mm Bofors guns my Romanians use. This vehicle was actually a Polish-built licensed Fiat 508 variant. 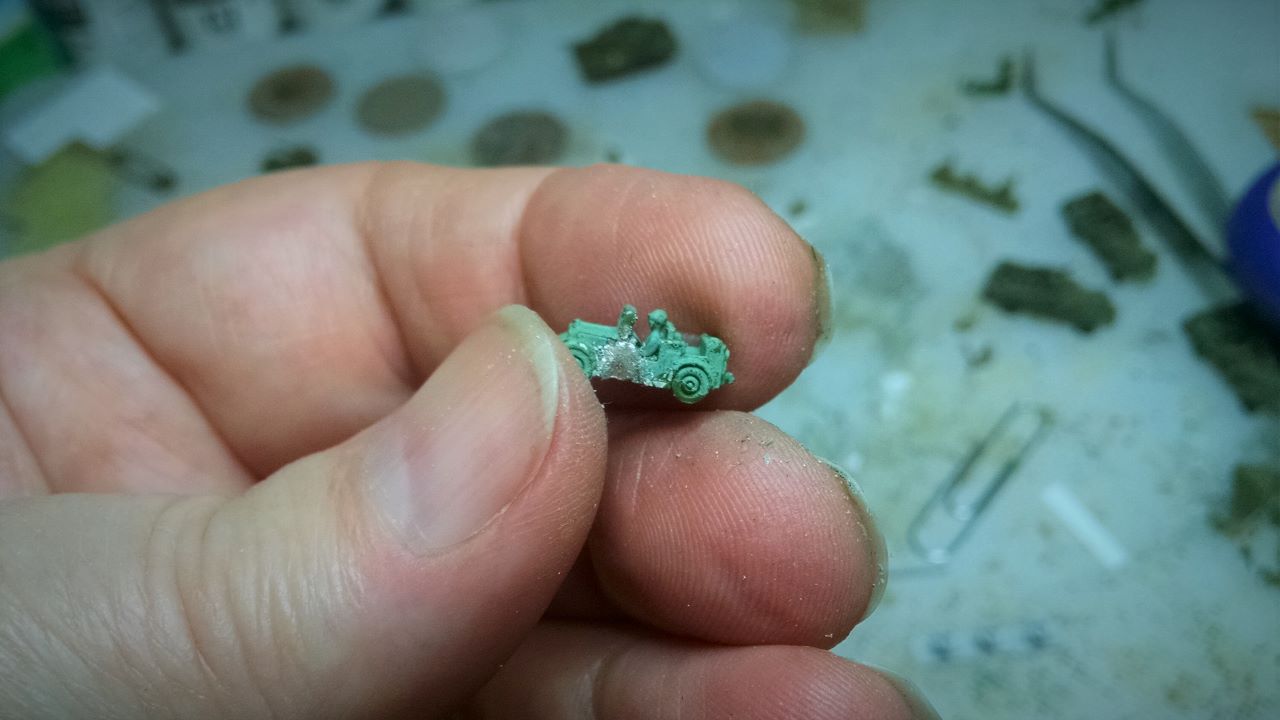 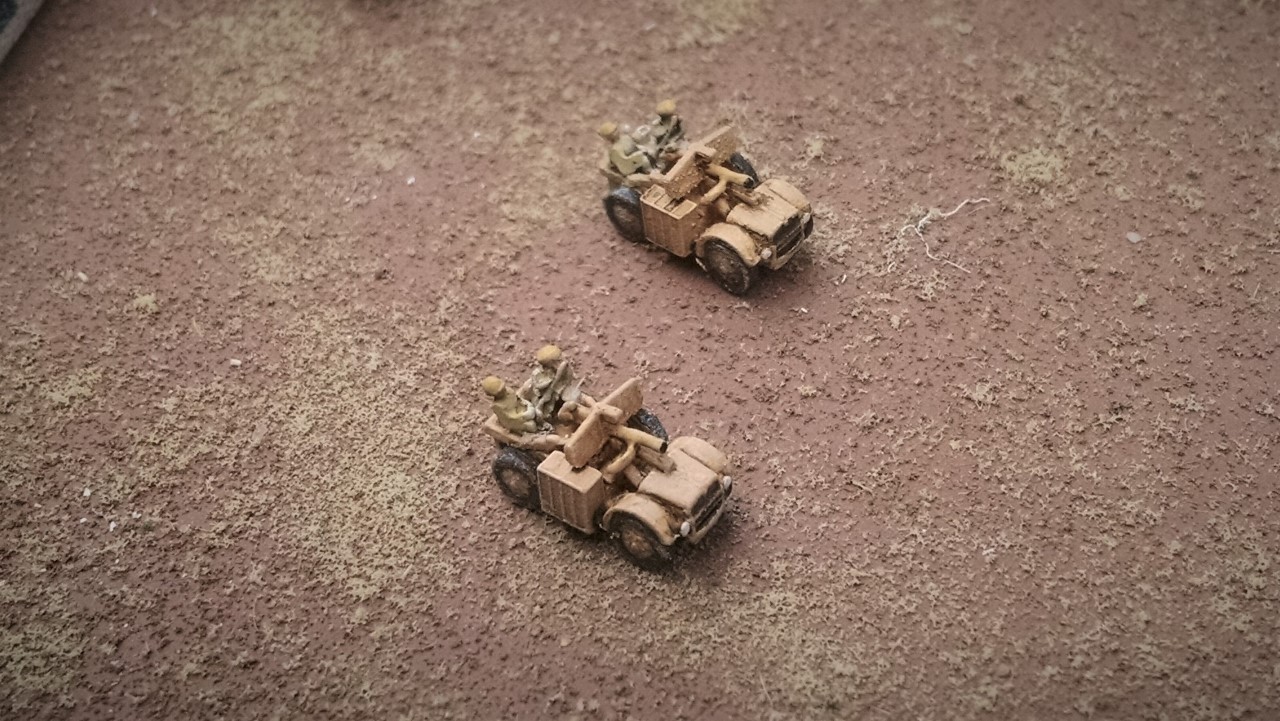 While we're on my Italians, these are Italian Autocannone 75 su TL-37s from my collection. GHQ also does not make this piece of kit, which is quite useful if one wants a mobile Italian strike force. 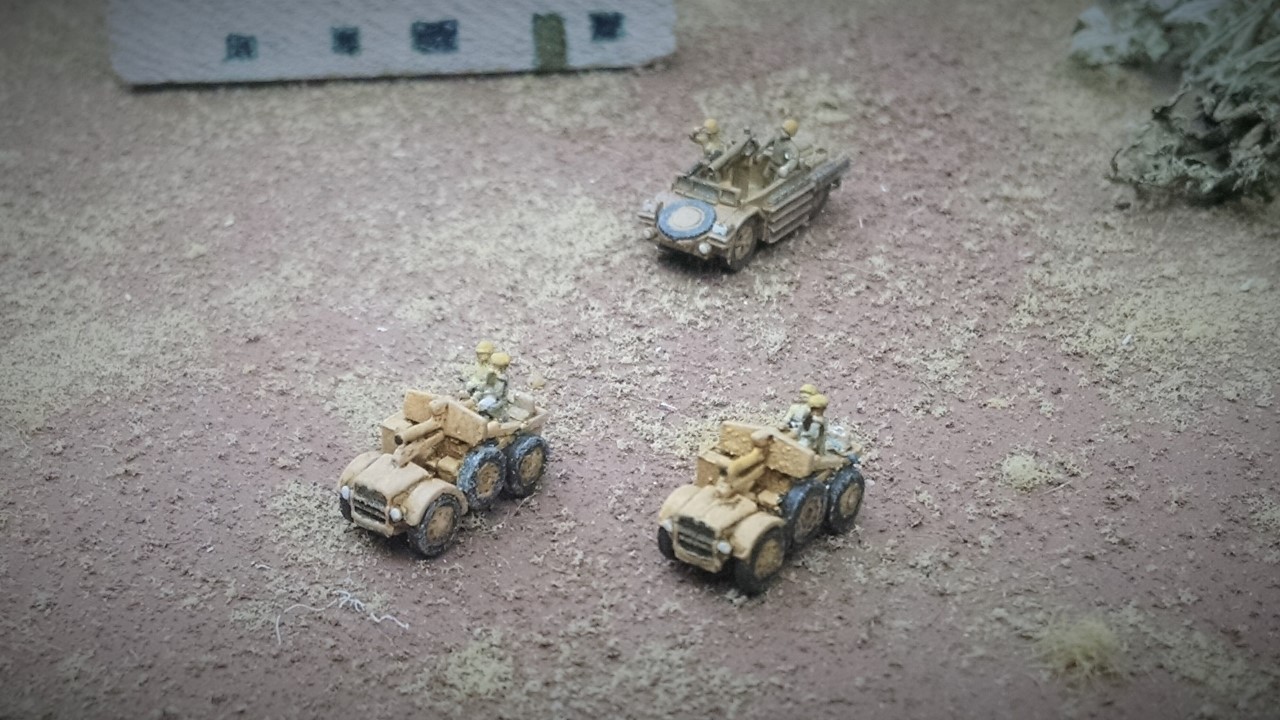 In particular they provide a bit of SP arty punch to my GHQ Saharianna recon units in Tunisian gaming scenarios. All of the crew figures, on both the Autocannones and the Saharianna, are from the GHQ.

The standing figures come from Artillery crews, while the seated figures are sliced off of the Russian seated infantry that comes in the 45mm AT gun / 76.2mm Infantry gun pack. 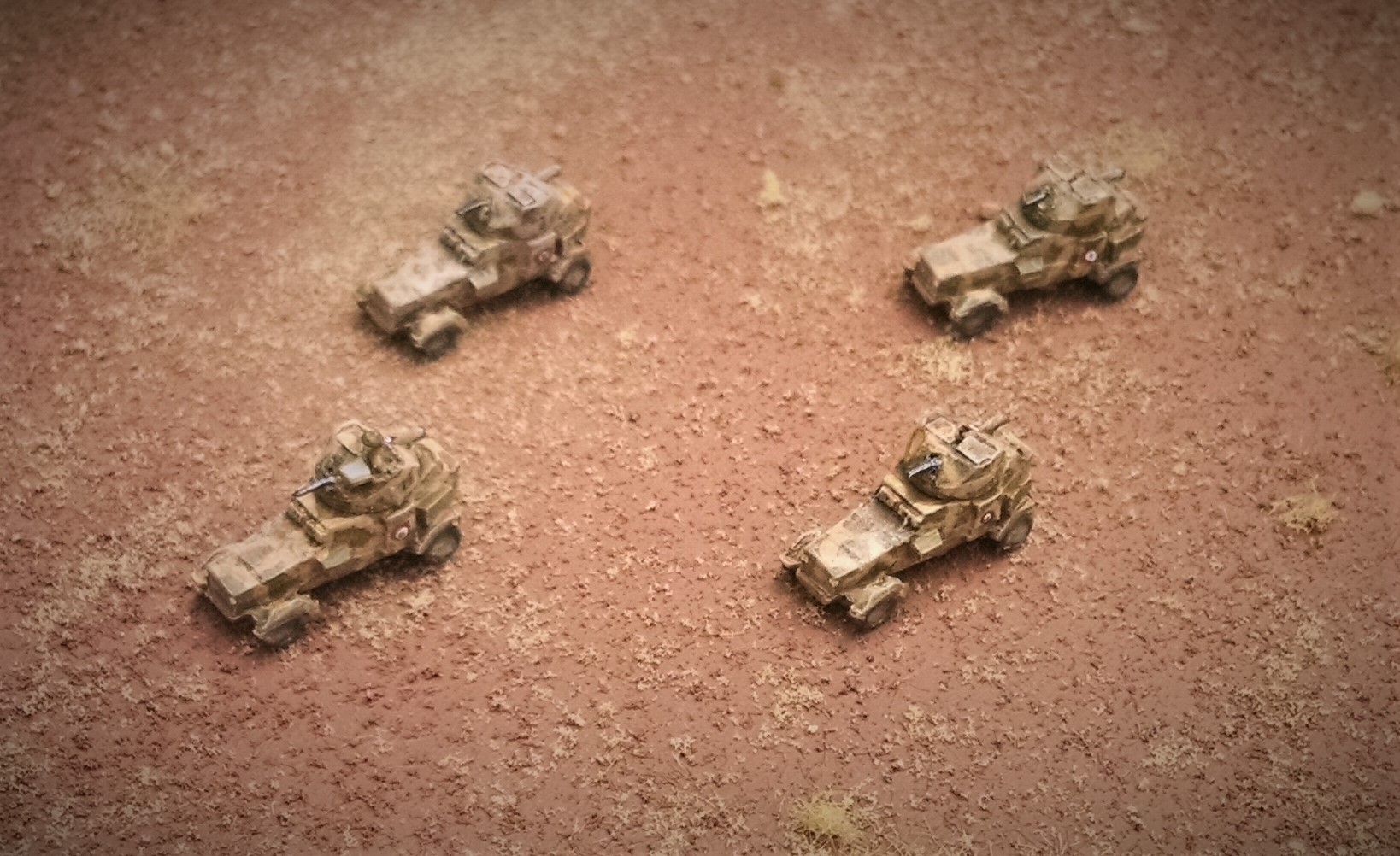 While we are in Tunisia, to oppose my Italian light forces I have built up some French light mobile forces as well. Here is a platoon of French AM50 armored cars. This interesting vehicle had a 37mm cannon and a machine gun sticking out of opposite sides of the turret. It had mostly been replaced in metropolitan units by the more modern AMD-178 armored car (which GHQ makes, and I have). But the colonial forces were still mostly equipped with this vehicle, hence its role in Tunisia in 1942/43. GHQ does not offer it, and quite frankly the quality of these models from a UK vendor is not great, but hey it's what I could get, and I got 'em. 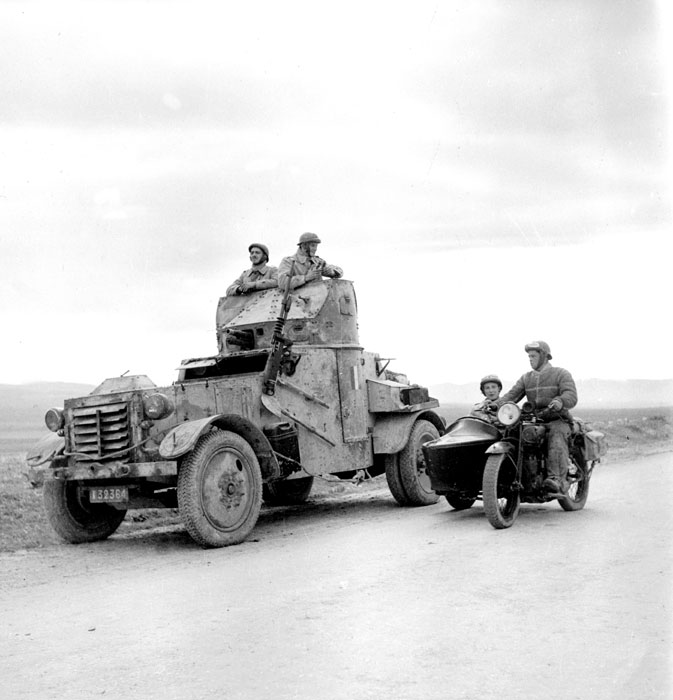 They provided some punch to the French RCAs (Regiments Chasseurs d'Afrique -- African Cavalry Regiments), which were pretty much fully motorized by the time WW2 came around, using motorcycle troops, trucks for their support weapons, and AM50s for a bit of armored punch. 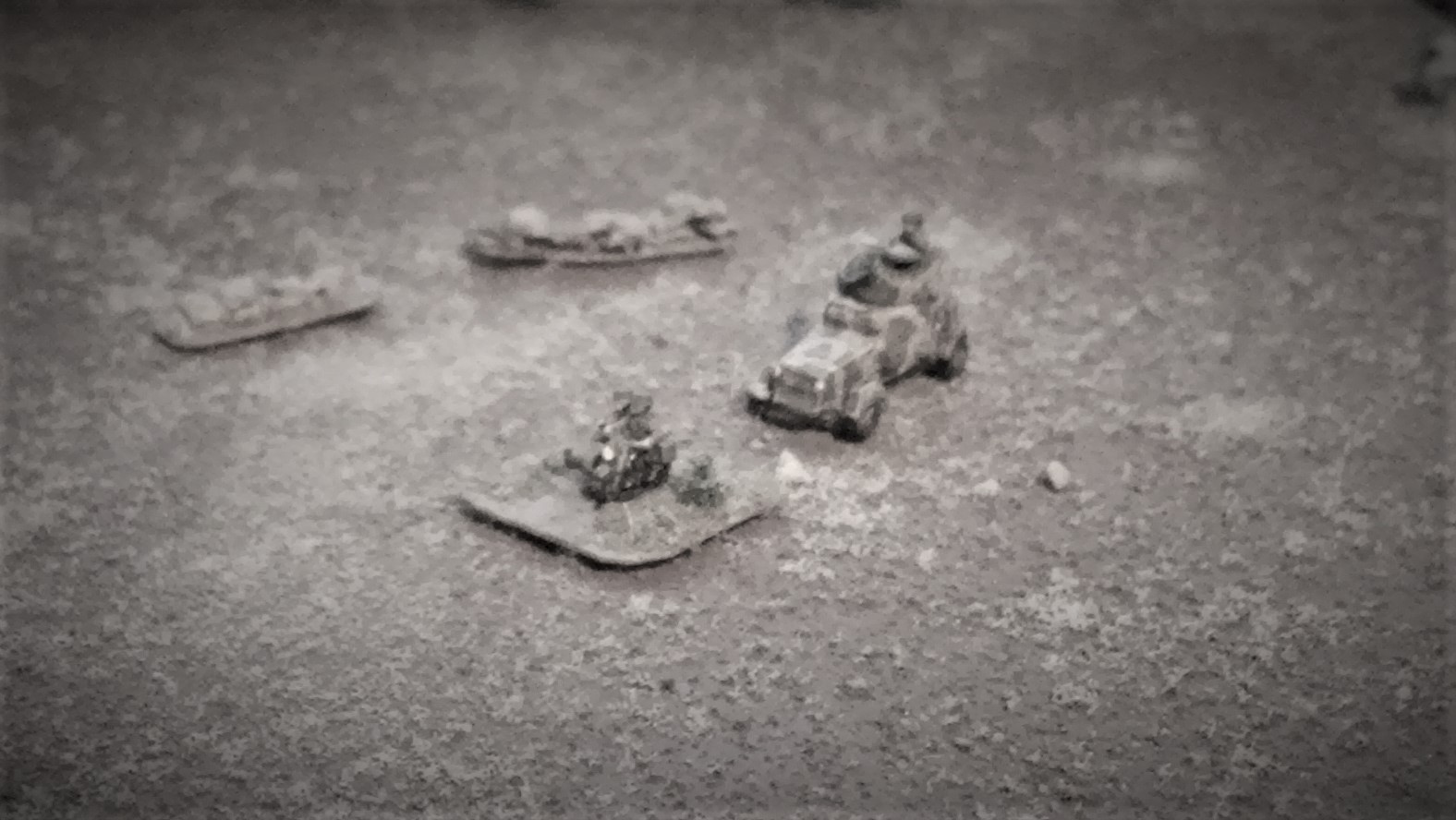 In my French North African forces they are teamed up with my French Motorcycle Company, made using the GHQ German Motorcycle Sidecar pack. 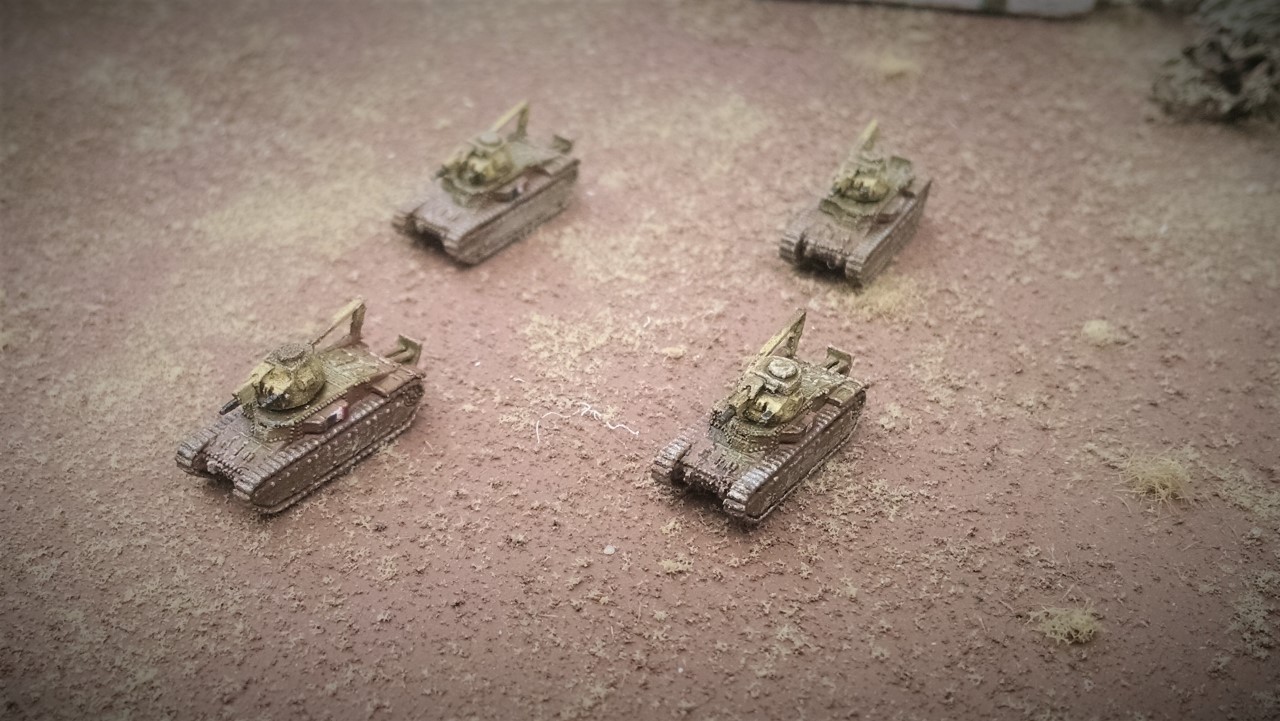 My French North African force also has some Char D1s, another model which is not available from GHQ. This was the heaviest armor available to the French to confront the Americans in Morocco or Algeria, and later the Germans and Italians in Tunisia, until some S-35s (which GHQ does offer) made the march from sub-saharan Africa all the way to Tunisia just in time to be shot up by Panzer IVGs in 1943. 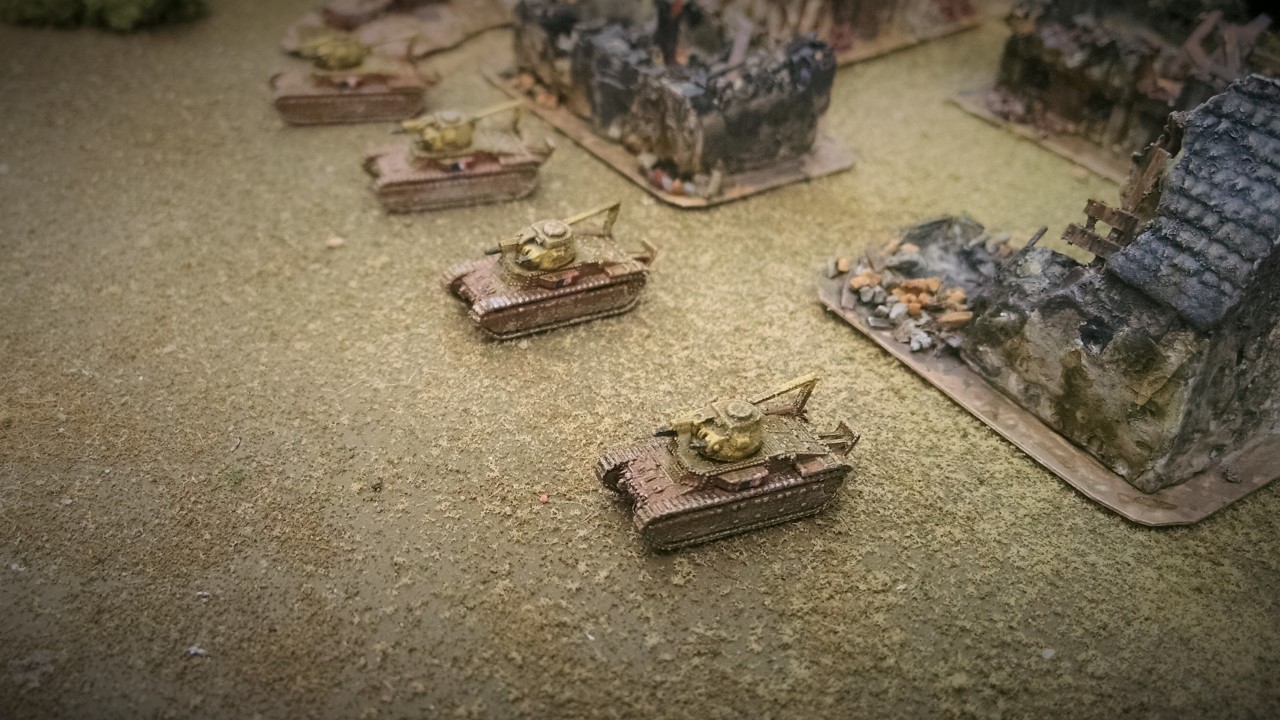 The Char D1 also saw limited use in the 1940 campaign in metropolitan France, so these models can do double-duty. But they were rare in France itself, having mostly been shunted off to North Africa as France ramped up their re-armament program in the late 1930s.

So there is a sampling of some of the odd stuff that GHQ does not make that I have managed to find and add to my collection.

Rather more than mine. At the moment my entire Romanian ground forces consist of one platoon of 3× TACAM T-60A 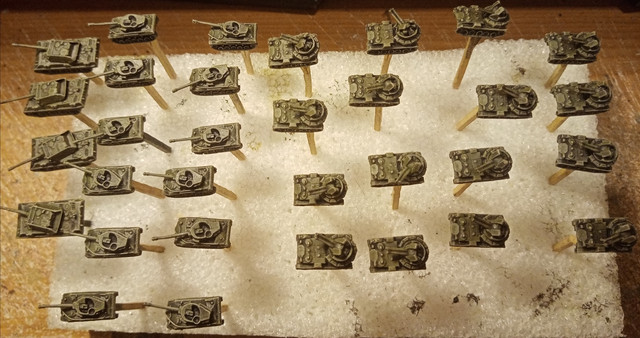 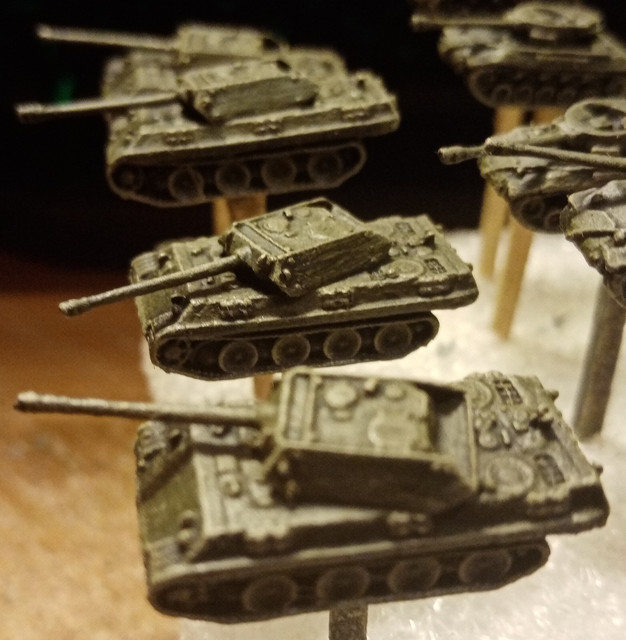 I finally got around to buying some matt varnish today, so here are those finished 'M10s'. M10s by 2d6 Wargaming. Allied Stars by I-94. 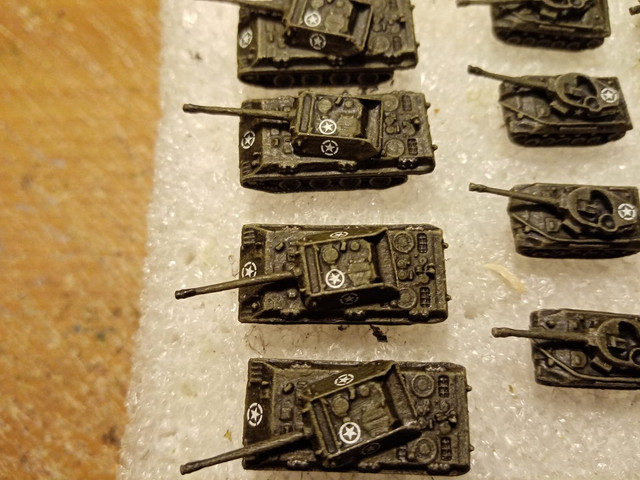