So is there one definitive or authoritative text that gives you the order of battle for the Pacific war engagements? Assuming the official history‘s have it, but is there a go to source beyond that the people use? Just curious for when and if I get into micronauts.
Top

I generally refer to Samuel Eliot Morison’s History of United States Naval Operations in WWII. Those books give a pretty in depth breakdown, in an easy format, and even though the whole series is 15 volumes, it’s broken down nicely to specific time periods or engagements per volume, so you could just get the book that applies to your needs. Oh and he covers all combatants with his breakdowns.
Top

For Orders of Battle, I like navweaps.com. At this website, there is a tab you click for the orders of battle that covers multiple eras including WW2 and breaks down to different theaters of operation too.
Top

It's winter in Minnesota, too cold to spray paint in the garage, and my thoughts turn to WW1 micronaut conversions. Yes, there are 3-D printed alternatives, but those GHQ planked decks and sturdy features are irresistible. Candidates:

Monmouth to Cressy: four narrow funnels replace three, a pair of 6" casemates amidships instead of one, and a 7.5" turret from Devonshire on each end, and some styrene on the aft bridge. Diadem is basically a Cressy with pairs of 6" mounts instead of the turrets. Still, all those ventilator cowls. . .

Schleswig-Holstein (WW2 version of Pommern) to Wittelsbach (class prior to Braunschweig): narrower quarterdeck, secondary turrets and funnels from Braunschweig, primary 9.4" turrets from Danton, some filing and filling.

Erzherzog Karl to Kaiser Friedrich: same 9.4" turrets from Danton, one amidships turret from Braunschweig, a little work on the boats, file down the quarterdeck one level and move the aft turret toward the stern.

Leon Gambetta to Jules Michelet: trade two amidships secondary turrets for the one in the middle. Replace twin 6.4" guns with single 7.6", not much difference in this scale but some drilling involved. Remove some boats.

Leon to Edward Quinet: basically an elongated Gambetta, use two models: cut one just aft of the amidships secondary turret, the other just forward of the same turret, and join the two halves. More drilling for single-gun secondaries., but we have spare funnels, superstructure and turrets now.

Danton to Liberte: Whaaat? It's 1/4" too long, but take it off forward and reshape the bow. Move the forward main turret aft 3/16" and substitute the superstructure pieces and secondary turrets of the Leon Gambetta, which now fit around the secondary turret openings. IT WORKS!

Regina Elena to Napoli and Roma: Thin the bottom of the superstructure piece to remove the extra deck, then have some fun picking funnels out of spares other models, perhaps San Giorgio, Gneisenau, or something else that looks right.

Here's an on the workbench photo. They are Shapeways models in various stages of completion, except the Duca degli Abruzzi. They are a nice compliment to GHQ models and fill out the the gaps in the GHQ line. I'm looking forward to some serious convoy battles soon. They are from left to right, Ramb II, Oceania (front), Pietro Orseolo (back), Ramb III. 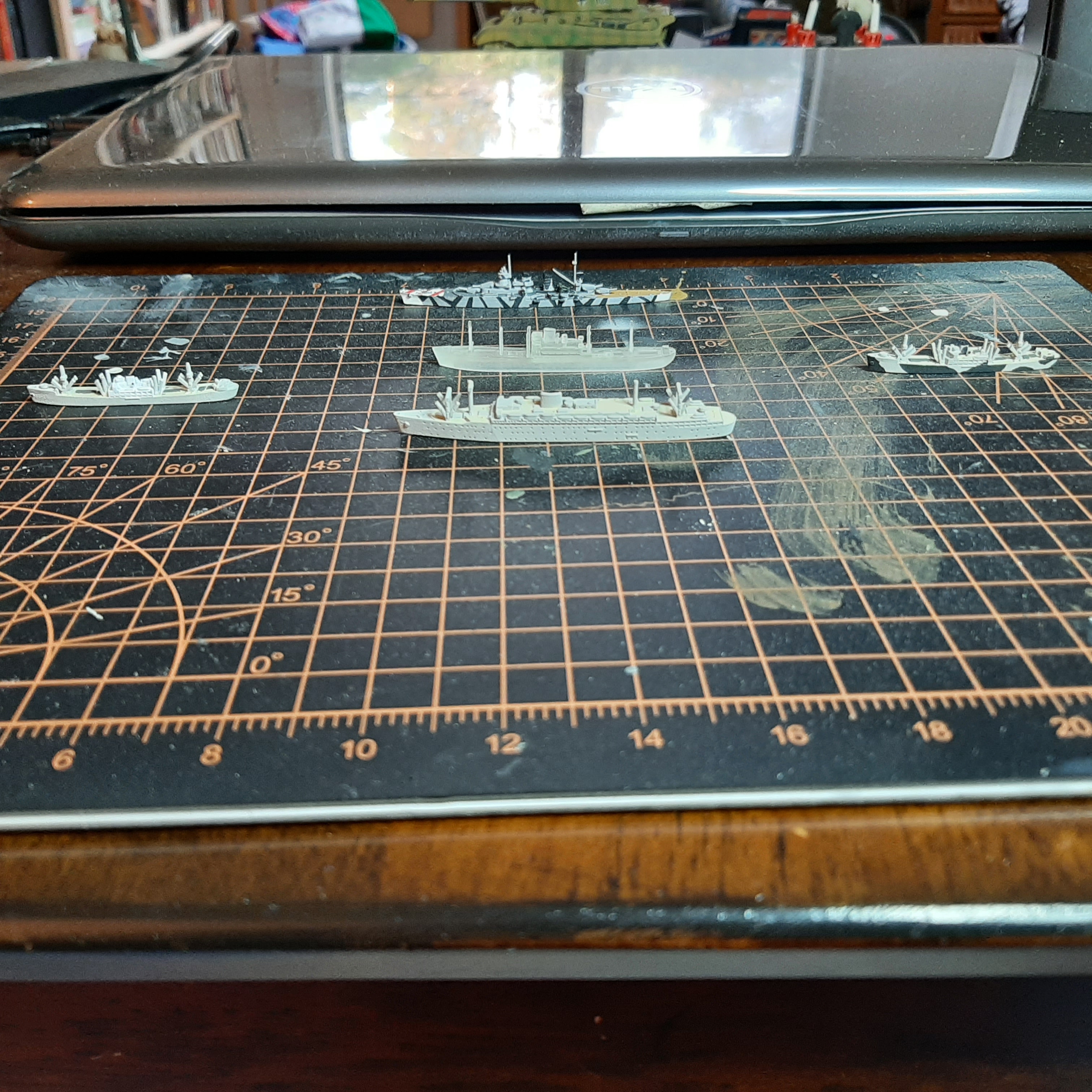 Looking good regia
Quantity has a Quality all its own.

Thanks Hoth! They nicely compliment GHQ models like the Abruzzi.
Top

Keep posting pics, its inspiring me to get mine done and on the page. I will be looking for the paint next week.. Mine will be modern though.
Quantity has a Quality all its own.

Thanks redleg! I appreciate it. I'll post another photo when they are done. I'm looking forward to seeing your moderns and Korean War carriers. Your ships always look great.
Top

Guys, I've been out of painting my ships for a while, long enough for my Poly Scale paints have turned to stone. Can I get some advice on who's paints you guys are using? Brush and Air-Brush. Any advice would be appreciated.! -Submariner
All things Japanese Naval
Top

Welcome back, it would be great to have another ship painter around! I use only Vallejo acrylics on all of my minis, in my experience they cover great, clean up easy, if you make a mistake, they come off easy. and when sealed are more than durable enough.
Top

Are used Micronauts easy to rehab? That is if I came across them already painted and wanted to strip them, would it be too harsh to use my typical method of a toothbrush after a soak with simple green? Some parts look very fragile and I’m wondering whether I should avoid used pieces as a general rule of thumb? Thanks.
Top

If it wasn’t a major investment, give it shot on one small ships like a destroyer and see what happens. Worst case, you’re out one ship that comes three to a pack.
Top

When I recently did some simple green stripping, I made sure to use the toothbrush
process over a wire mesh strainer to catch those small parts that the glue didn't hold on to.
Top
Post Reply
1292 posts