CoC reconnaissance aircraft were able to identify the large naval convoy from the Eurasian Empire as it prepared to transit the Bosporus and enter the Mediterranean Sea. The majority of the ships in the convoy appear to be merchant ships – 26 ships total. These cargo and transport ships are escorted by 7 surface warships (5 destroyers and 2 cruisers), and at least 2 submarines.

The convoy’s destination is not known at this time, and the Eurasian Empire has declined to comment. 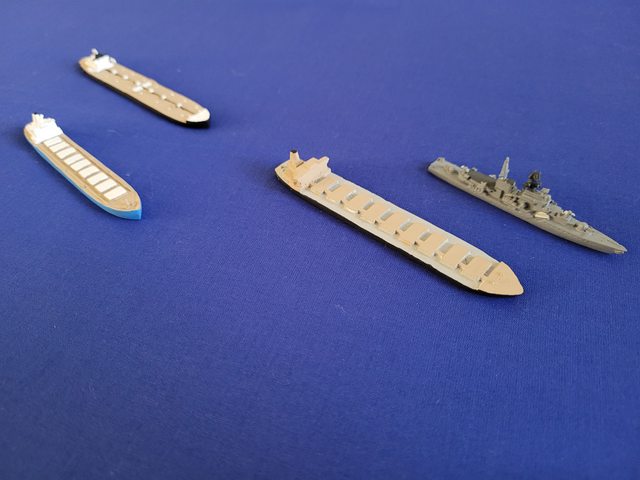 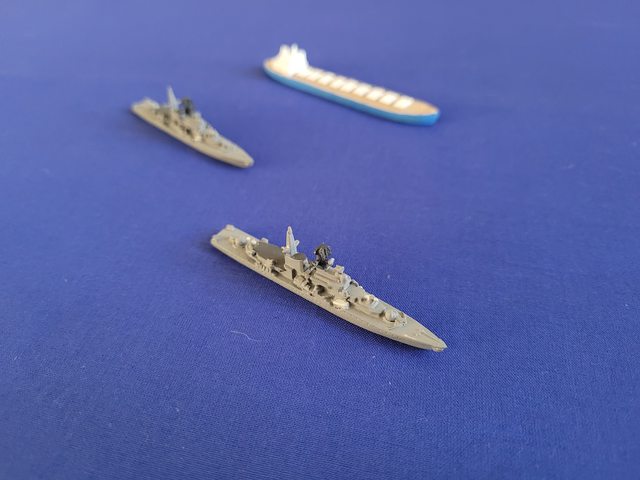 In preparation for the EE transit of the Borphorous Straight the Chickoviadom (western part of Turkey) CG will inspect several cargo vessels for not filing manifest for transit.
Last edited by chrisswim on Fri May 21, 2021 10:49 pm, edited 1 time in total.
Chris
Top

By International Law and Treaty the UIN approved the transit of the EE navy group through the Bosporus Straits as all ship are under military flag. The request to inspect the ships are denied. All paperwork had been submitted to the UIN committee that handles navigational waters. Admiralty Law applies.
Drones passing overhead were taking images, transmitting them. Some were hit with lasers to disrupt and/or destroy the drones. Of course, along the banks and other ships and boats were moving in parallel as the channel was more wide, taking pictures.
The visible crews were all or mostly military based upon the uniform worn by those on deck. There was some jeeps and some other military vehicles tied-down on the top deck. Acoustic sound was recorded and evaluated by Sonar. 3 small recording and transmission UW drones were attached by magnets to 3 of the cargo vessels. Several others were attempted, several did not attach and 4 others came un-attached.
In the Aegean Sea there was a Sturgeon Class, a L.A. 688 I class sub and a U-212 waiting for the EE naval group. A couple of other subs are to the northeast and northwest of Crete along with patrol craft waiting at airbase in Crete.
Chris
Top

Mediterranean Sea
The EE naval group, now identified as 5.21 has turn to the west a few hours ago. The ships maintained speed even though spread out after leaving the Bosporus Straits and through the Aegean. So supply for Egypt is dismissed as a possibility. It is unknown the destination, but observation will continue. A small task force is making final preparations with plans to follow the EE 5.21 TF.
. A few already exited the Med. for normal training activity near the Canary Island chain. The Illustious, DDH Hei, a Tico 2 Burkes, and 4 FFGs are conducting ASW and AAW exercises. 4 submarines are station there to play havoc with the surface TF. Aircraft will also ‘defend’ the Canary’s.
. 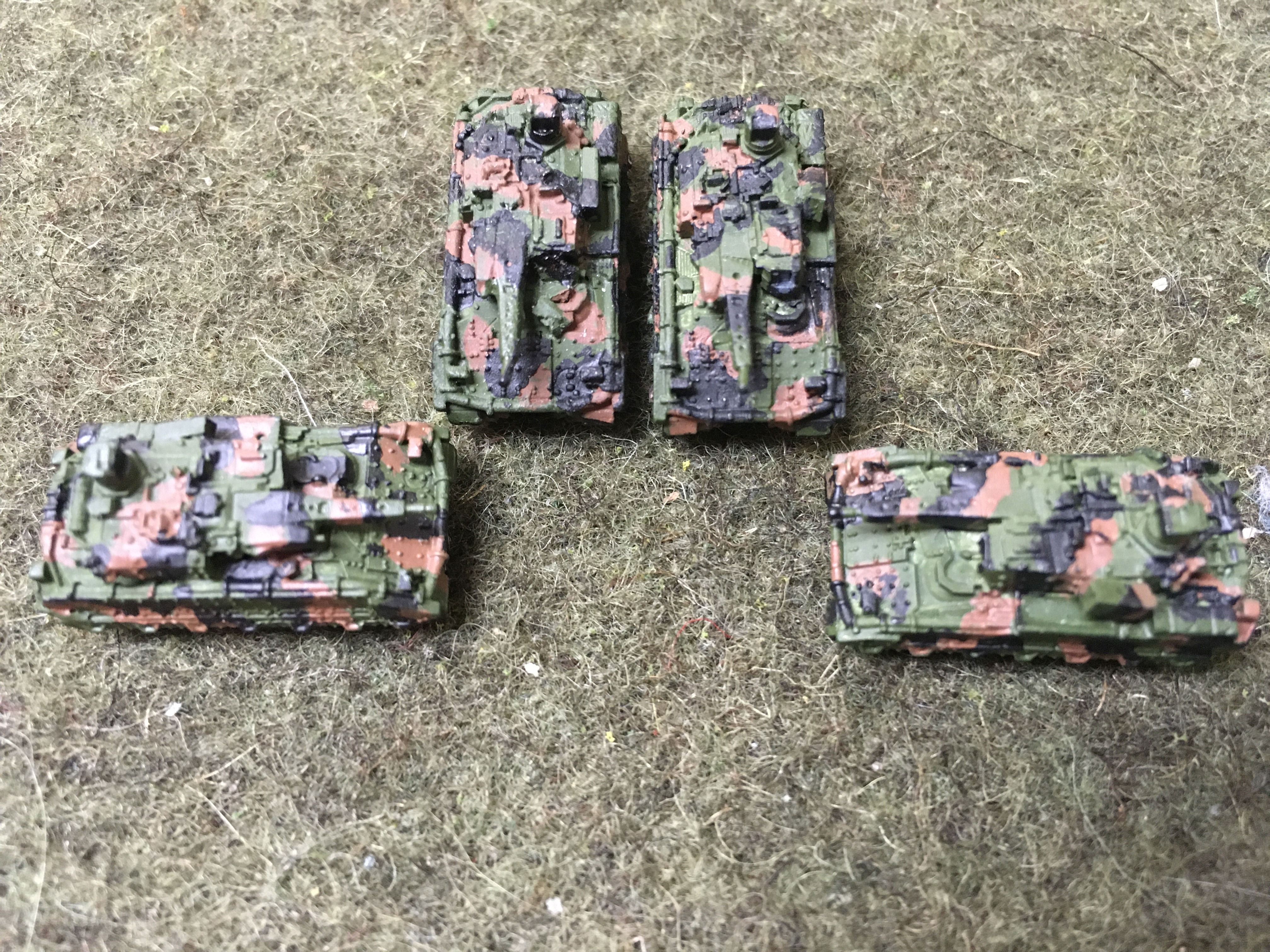 The Commonwealth Army is announcing a change in structure of the ‘typical’ battalion from 3 companies to four. The expected structure will be 2 armored companies and 2 mechanized infantry companies. Evaluation of the Black Sea War indicated that the heavy armor were not as capable in fighting against ATGM attacks and in urban areas. There will be occasions where this organizational structure will be modified as needed. They may also be occasions where the company itself might be modified as a Panzer Grienadier Company or mixed company. The M2A4 allow for increased firepower in support of infantry.
Chris
Top

CoC
The organizational change has been in planning and implementation for some time. 4 companies to a battalion, 3 battalions to the BDE, and 3 BDE to the division. Scouts, engineers, artillery, medical, maintenance, air defense, anti-tanks, logistics & supply are other elements, etc. At times there will be augmentation with another battalion, Cavalry/recon, additional artillery, special forces.
.
In transit to NC the task force experienced a few problems with inclement weather. A logistics/supply ship and a FFG bump, causing the loss of an arm by an NCO. He was flown to the LHD for more through medical aid. A pallet of toilet paper was lost to the sea. We hope that Neptune is appreciative for this gift. The sailor is expected to recover except for the loss of his lower arm.
Last edited by chrisswim on Tue May 25, 2021 8:04 am, edited 1 time in total.
Chris
Top

Mediterranean Sea
The EE TF 5.21 is moving along consistently, no rush with cargo vessels. Still heading towards the Atlantic, West of Sicily. We have lost specific location of an SSN in the TF, although it hasn’t slipped from the EE TF. It extends over 30 miles from the front to the stern of the group.
Chris
Top

As most of the EE TF 5.21 has entered the Atlantic the Americus JT Base is more calm.
Although extended flights will begin even though there are Commonwealth ships following. Of course 5.21 could split up in different directions so we must guard against complacency. 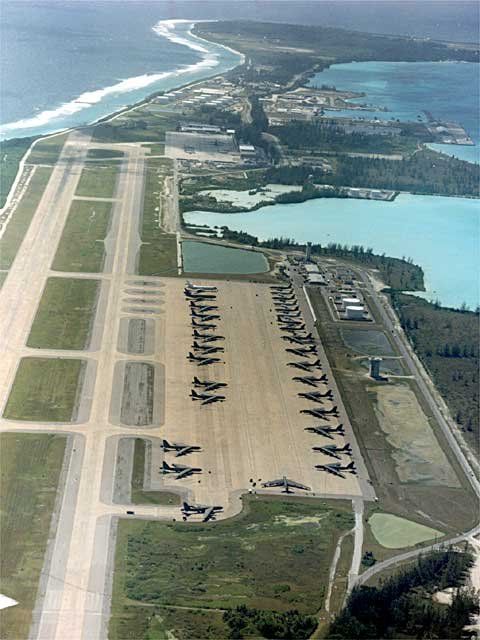 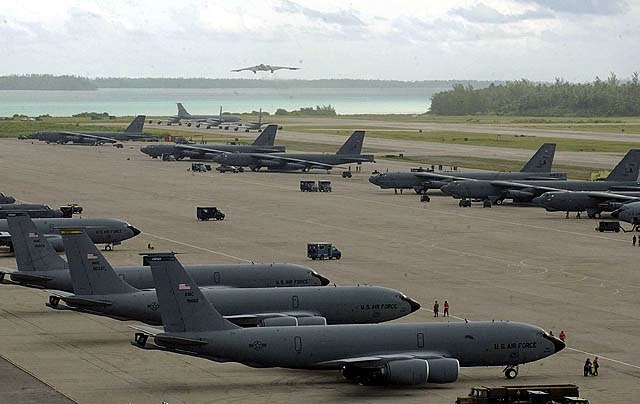 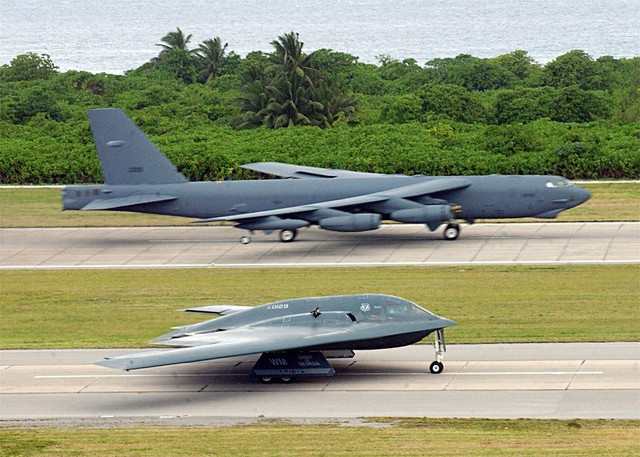 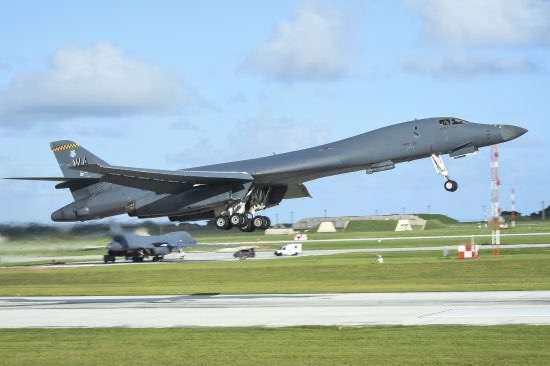 The EE TF 5.21 started to ease towards the south once passing the islands off the coast of Africa. We have a DDG following the larger body of EE ships with a two cargo and a Udaloy behind. Moving at a brisk 18 knots currently. The DDG Tokyo has helicopters and F-35 following 5 NM behind with and oiler, and two Type 23 Frigates. P-3 have started flying over the EE task force.
The EE warships are spinning radars, but not any targeting systems, not playing any games thus far.
Chris
Top

What color do you think those planes are?
Top

A couple of paint manufacturers offer it:

Following the EE TF 5.21, it has turned to a more southerly direction. The EE cargo and military ships are becoming a bit strung out. The DDG of the Commonwealth has moved to the northwest of the EE convoy.
Chris
Top

Greenlanddom
As the group heading to the Tankers’ Ball dock in Greenlanddom earlier this morning.
Dropping off some equipment and supplies for Nuuk. The RoRos will enter NC water’s Wednesday in the AM after departing Nuuk.

The EE task force, 5.21 is still heading southwest. It appears that it is heading for South America or the cross through the Panama Waterway. Report that there has not been any aggressive action or behavior.
Chris
Top 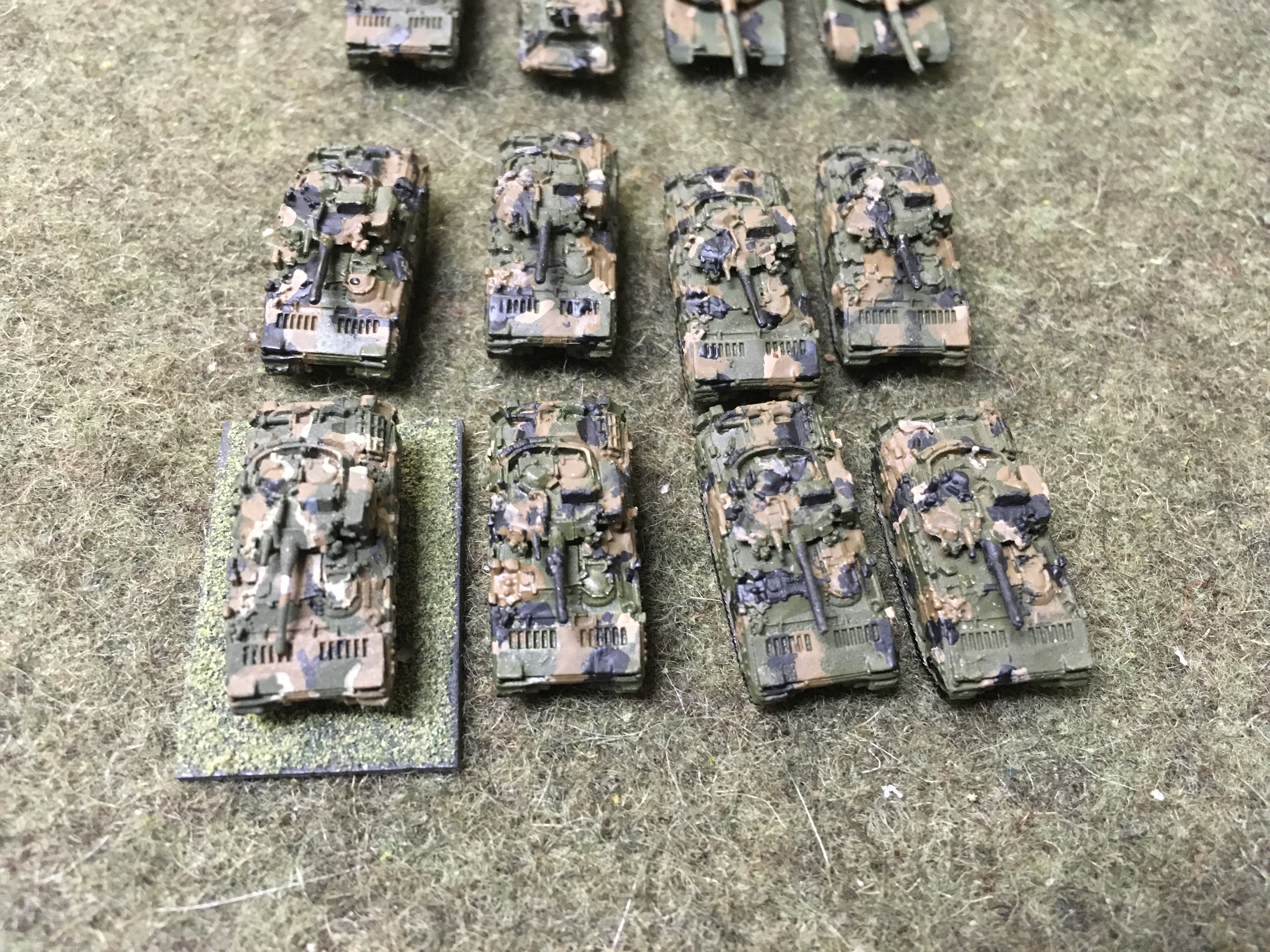 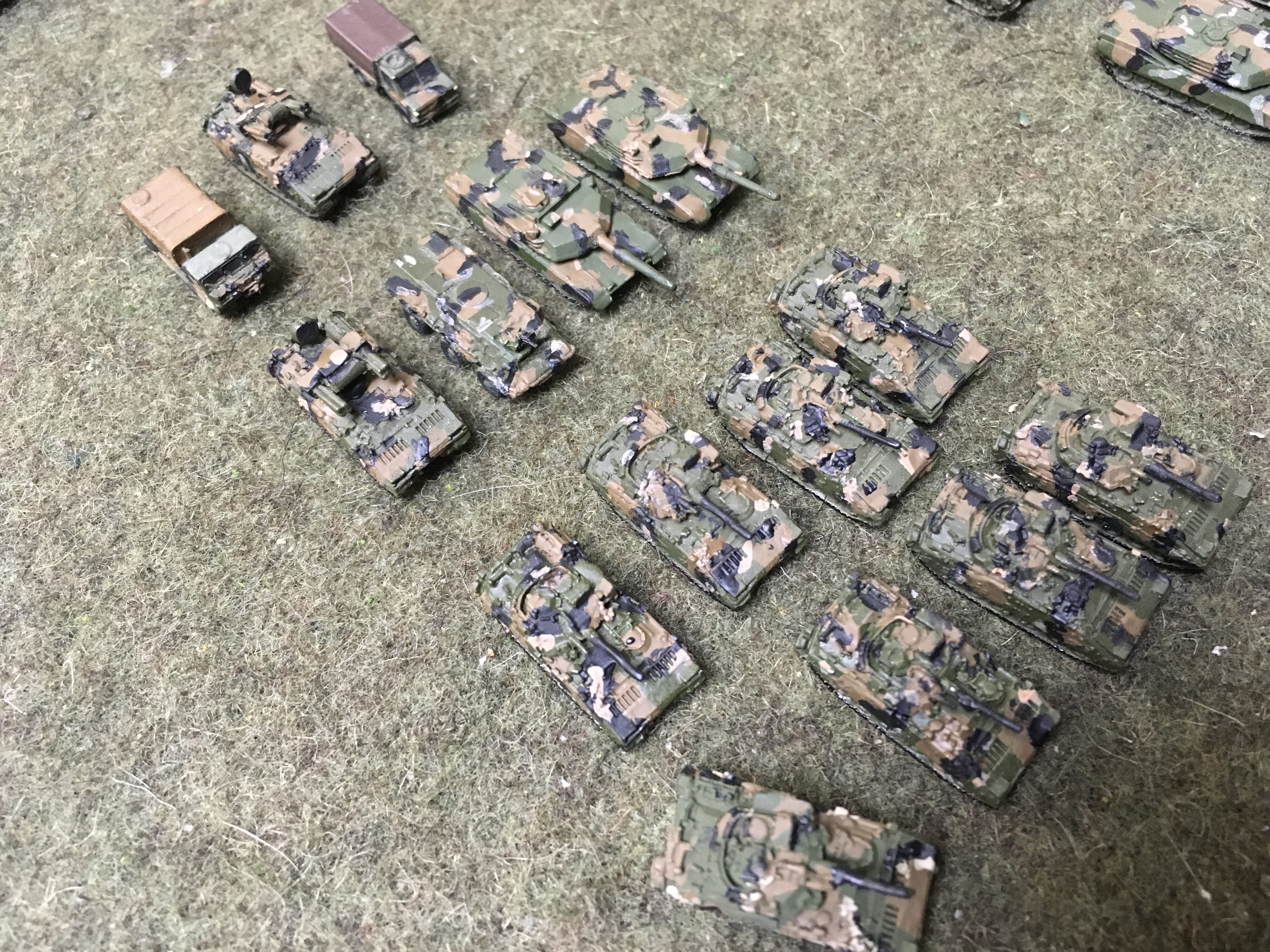 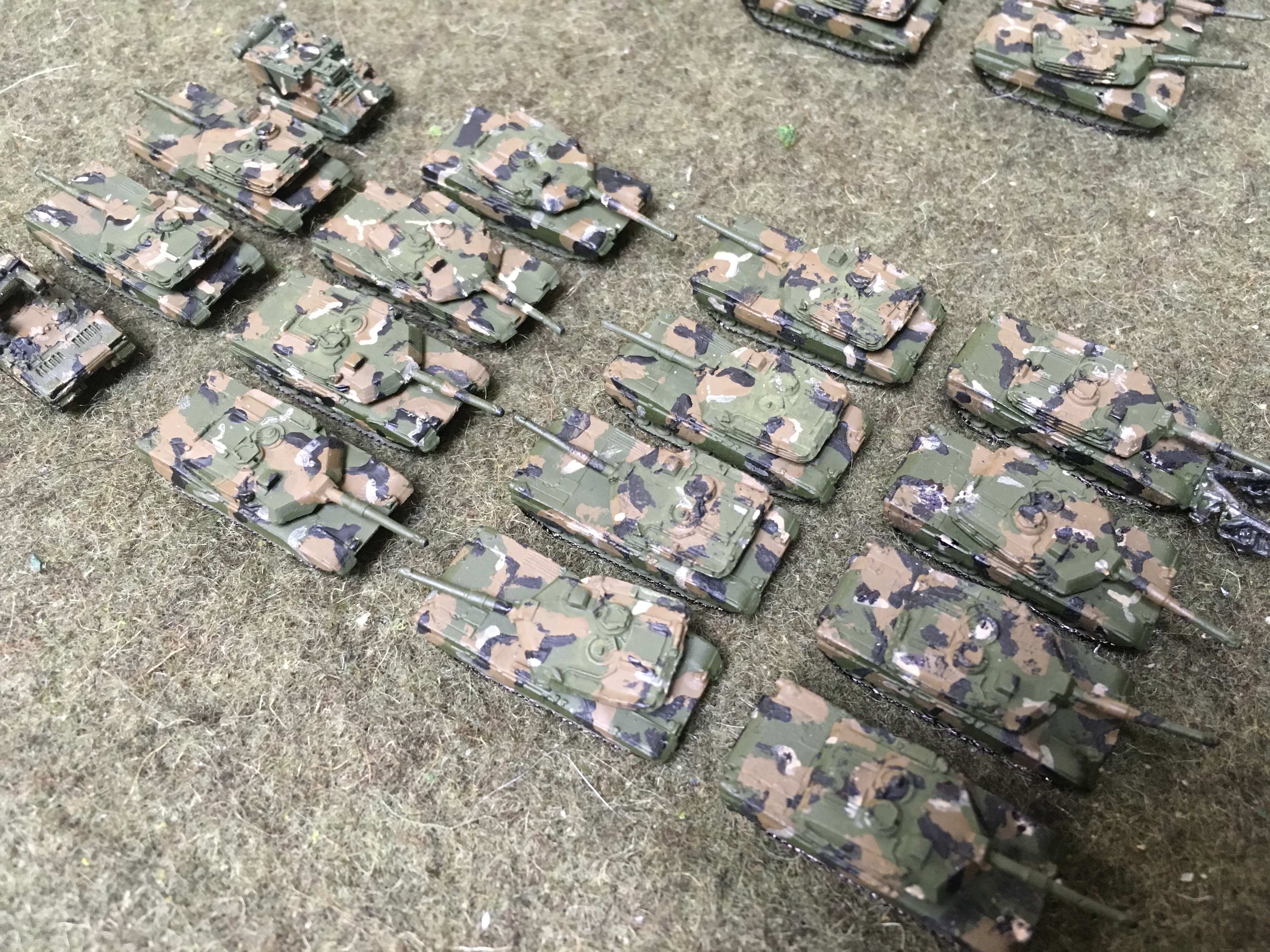 Broken barrels on these, perhaps Cav or Recon. 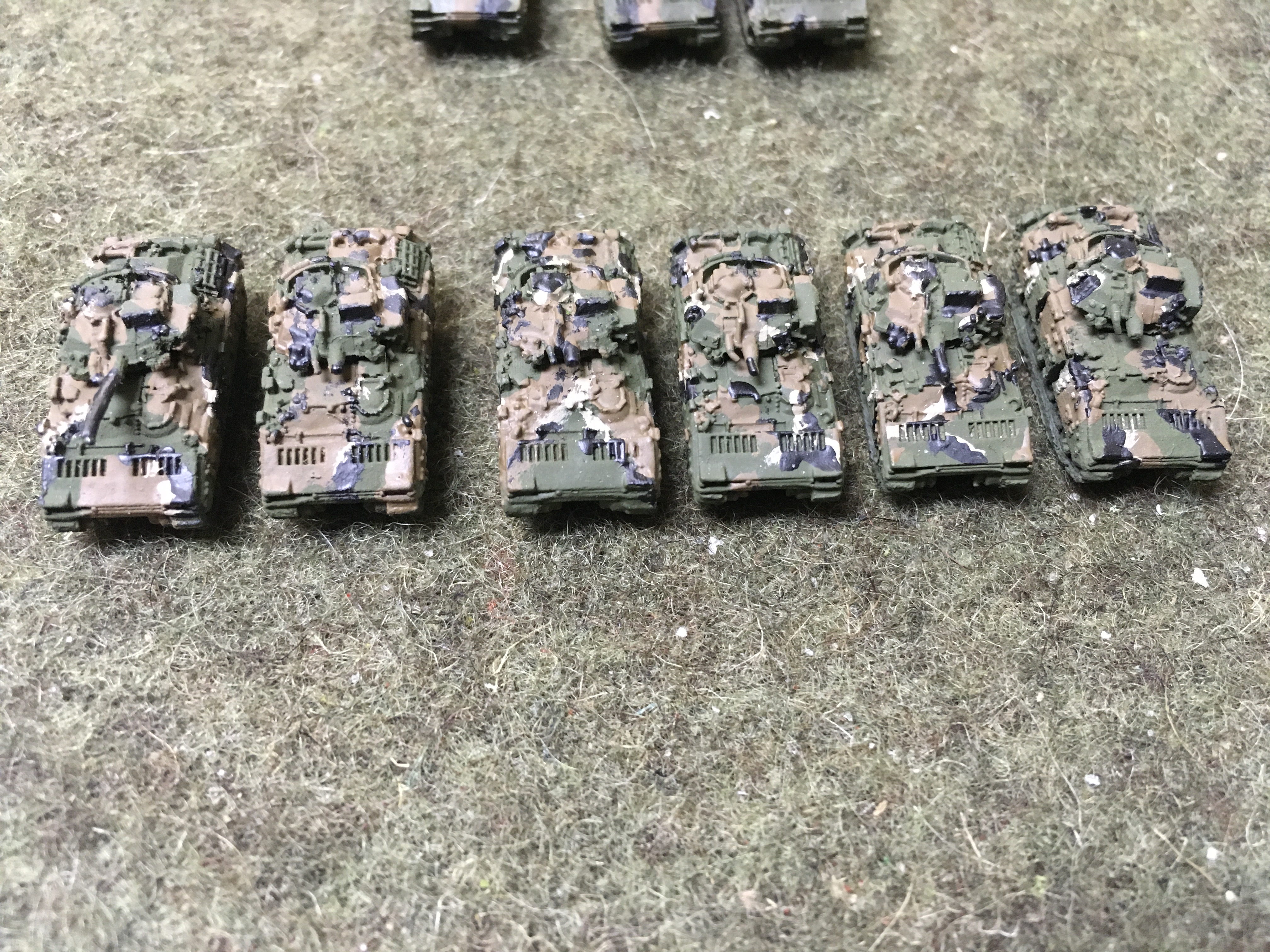 Brass rod will fix those barrels, Chris. Good green and good brown for MERDC. What are you using?
All blessings flow from a good mission statement.
Pogo was right. So was Ike.
"A Gentleman is a man who is only rude intentionally." (Churchill)
Give credit. Take responsibility.
Top